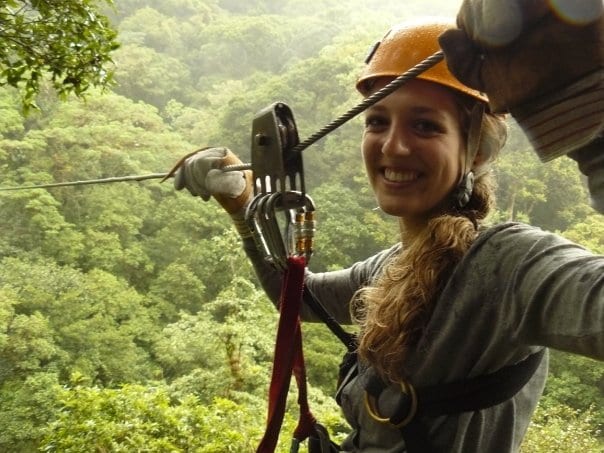 As most of you know, my sister and I will be competing in the Race to the Alamo in San Antonio, Texas, starting Thursday, August 4.  Since you’ll be reading a lot about her, I thought you’d like to get to know her better!

Tell everyone about yourself!

My name is Sarah, I’m 23 and live in Manhattan.  I spend my free time exploring my ‘hood in West Harlem, playing volleyball as much as possible, and working with my alumni organization and national chapter of my professional fraternity.

I love cooking and eating, which is probably my favorite part about traveling, and led to my addiction to eating fries with mayonnaise (ok, everything with mayonnaise.  Pause for Kate cringing).

I work off my culinary adventures with my volleyball team, Law and Order:  Swift Justice Unit, fresh from the Spring playoffs and kicking off the summer season!  I watch far too much TV and love bad movies almost as much as I love good ones.  I spend a lot of time shivering in air-conditioned rooms while dreaming of the beach. 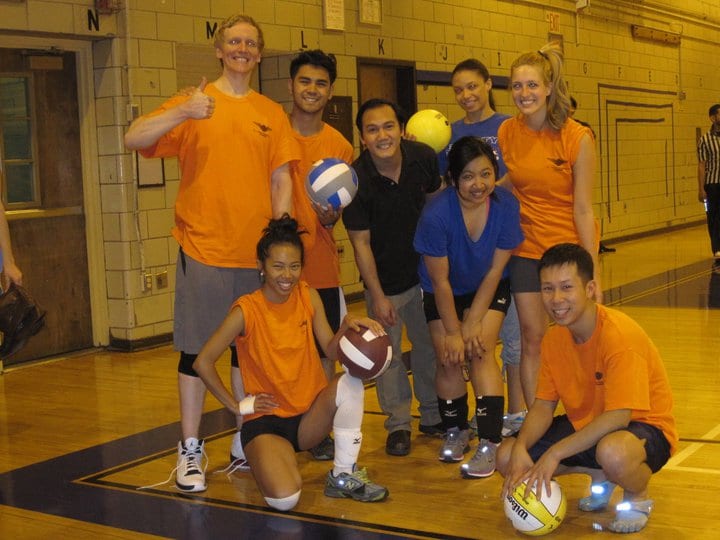 On your recent trip to Europe, you perfected the art of “crotch blocking.”  What IS that?

I recently went to Berlin, Paris and Amsterdam with my friend Rob.  Our conversations are usually 90% outlandish jokes, and we’re constantly trying to one-up each other and come up with the most clever, offensive, and creative retort that will leave the other person unable to continue.

It was in this spirit that crotch blocking was born.

While wasting some time on Lamebook one day, I saw a picture of a woman trying to look sexy with her leg up, and the caption read, “even tho I’m a mom I’m still hott!”  Upon further inspection, I saw that her crotch was clearly blocking her toddler’s face in the picture.  Of course, I thought this was hilarious and shared it with Rob immediately. 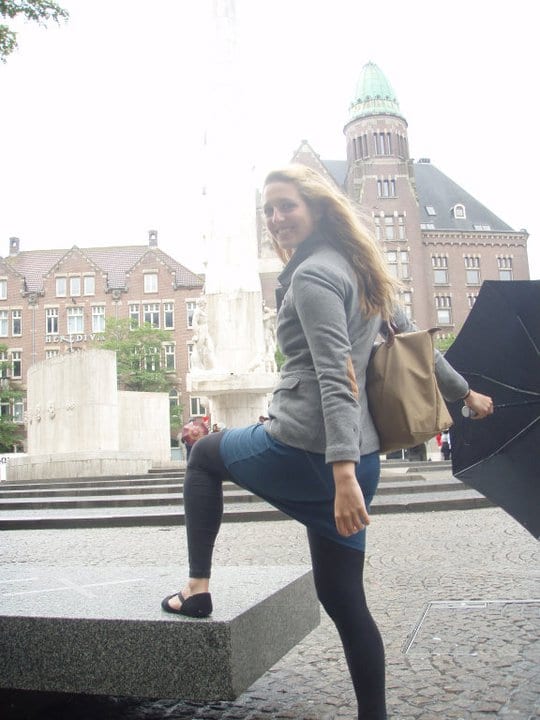 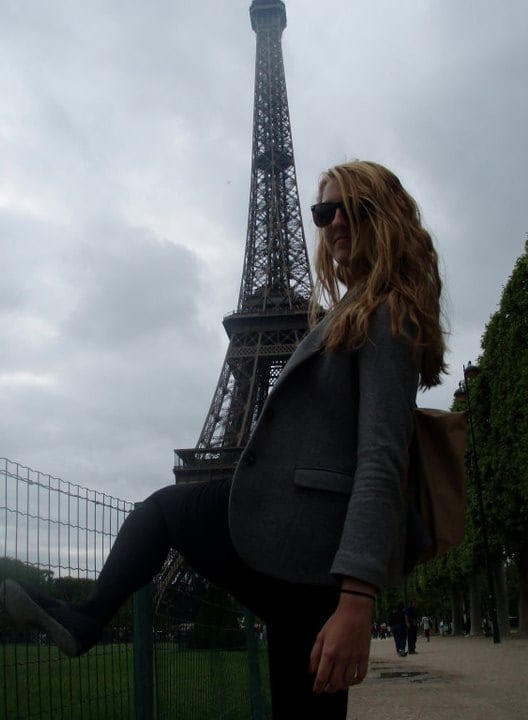 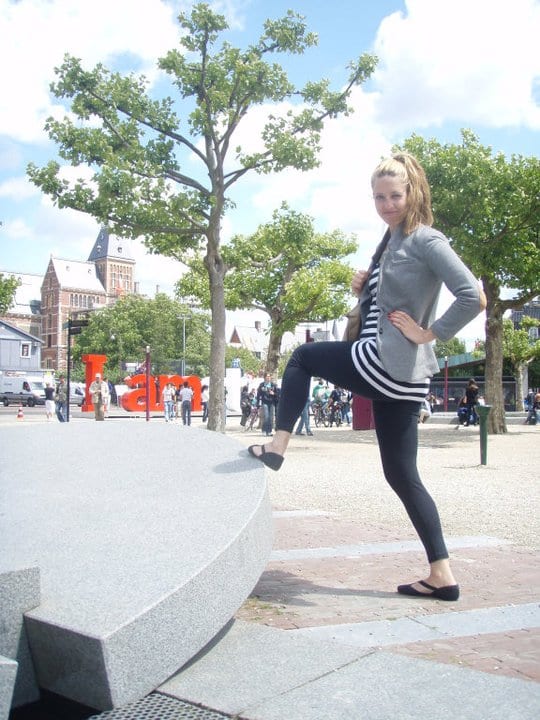 The first crotch block was of the Brandenberg gate.  Rob struck the pose, and I crouched down with my camera, both of us laughing so hard that it made it difficult to do as quickly as we hoped.  (This coupled with the fact that the kindly old gentleman who had taken a photo of us together seconds prior was still a few feet from us made the situation especially hilarious.)

It was a success.  We were off and running, blocking national monuments with gusto and efficiency for the remainder of the trip.  It certainly made for some of my favorite pictures from the trip.

What was your most creative crotch block?

Probably crotch blocking the bagpiper at the palace. 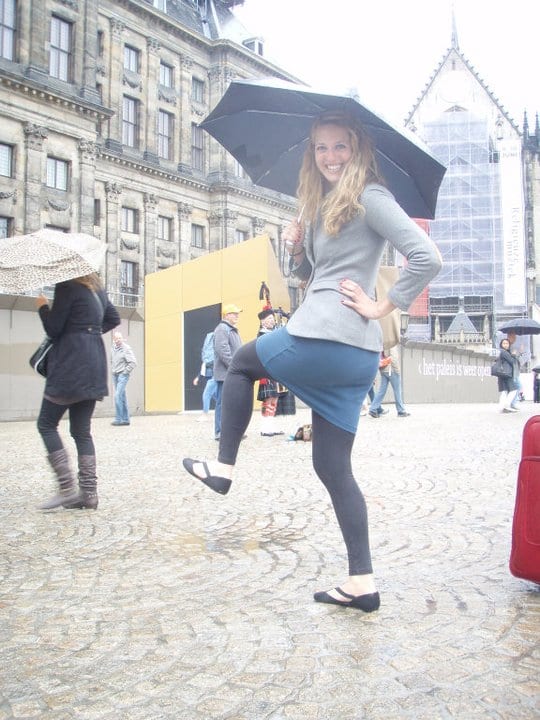 You’ve had a lot of adventures while traveling.  Tell us about one of your favorites!

I was in Prague for a film program, and as part of it, we would go on various excursions with our Czech teachers.  We got on the bus one day and were addressed by our very grandfatherly and sweet professor in broken English:

“We are going to Terezin.  It is a concentration camp.

If you are good, I will take you ALL OUT FOR ICE CREAM!“

The juxtaposition of this was shocking enough, but amusing considering he seemed like a sweet old grandfather trying to ply his (20-year-old) children with ice cream.

After the tour of Terezin (lead by a tiny woman wearing acid washed jeans, a tie dye t-shirt with the word “BEAUTIFUL” on it, and a totally jaded attitude), they took us to a small town near the German border for ice cream and lunch.

Two hours of an open bar later our half happy and half belligerent group were taken to a small wine shop down the street, where we proceeded to purchase about 50 or 60 bottles of wine between the 16 of us.  We loaded back on the bus to the city, and just as we were nearing Hradcany, our bus CRASHED INTO A STREET TRAM.

The icing on the cake was getting out of the (now incapacitated) bus, juggling enough wine to inebriate a small army, while the annoyed citizens of Prague watched us walk gleefully home. 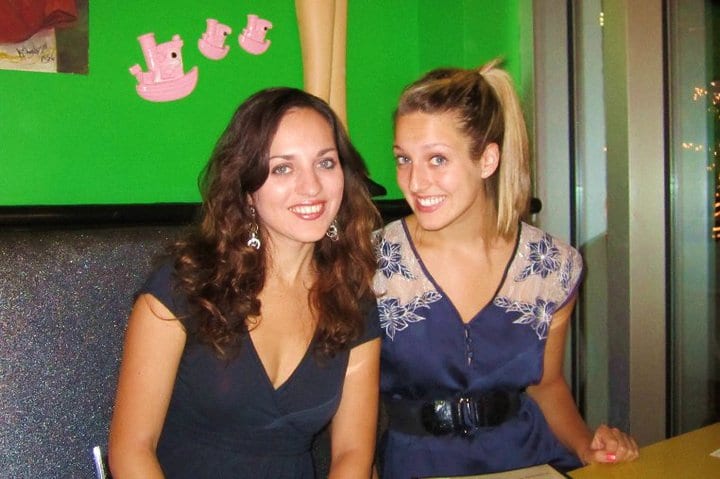 What makes you think you and Kate can win the Race to the Alamo?

We know each other better than anyone else, which makes us a great team – we can easily anticipate the other’s thoughts and actions.

What do you love most about living in Manhattan?

I love living in Manhattan!  Everything you could ever want is here.  Whether you want to find a great museum, park, theatre, store, or anything you can imagine, you can bet that if the best of its kind isn’t here, there’s at least a pretty damn good substitute.

It’s easy to find people with similar interests, too.  When I first moved here, I searched for a place to play volleyball, and found out there’s tons of leagues, courts, open play sessions, and recreational groups to join.

When I want to see an obscure art house film, I know it will be playing down the street.  If I want to see a free show, there are thousands of options on any given night.  It’s very tough to be bored for long here! 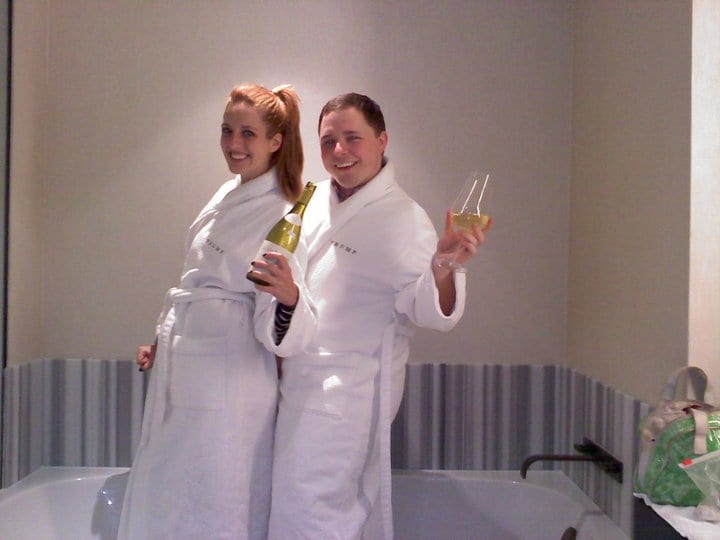 That said, if you could live anywhere, where would you live?

After visiting Berlin this summer, I can definitely say I would love to live there.  I had no expectations for Berlin — I flew there just because it was a few hundred dollars cheaper than anywhere else.

And it turned out to be the most unexpectedly wonderful place!  We stayed in the greatest hostel I’ve ever been to, and were constantly blown away by the gorgeous city, cheap and delicious food and crazy history.  It just goes to show you that when you take a chance on something, it may be the best surprise of all!

We spent the 4th of July in Boston last year, and what better way to celebrate than with men in uniform?  We planned a trip to the Charlestown Navy Yard, using the word “seamen” whenever possible.

With our hearts full of patriotism and our minds in the gutter, we attended a historical demonstration showing how the seamen of yore would fire cannons on the ship.

The demonstration was laden with innuendo – made worse by the fact that we were already in a saucy state of mind.  There was liberal use of the words ramming and premature discharge – the footage I took is shaking like crazy from all of us laughing so hard.

A Very Sexy 4th of July from Sarah McCulley on Vimeo.

Sarah and I start racing this Thursday — and we need YOUR votes!

The more events we win in the race, the more prizes we win for YOU!

Stay tuned to the site to follow our adventures through San Antonio and beyond.

13 thoughts on “Meet My Adventurous Sister!”