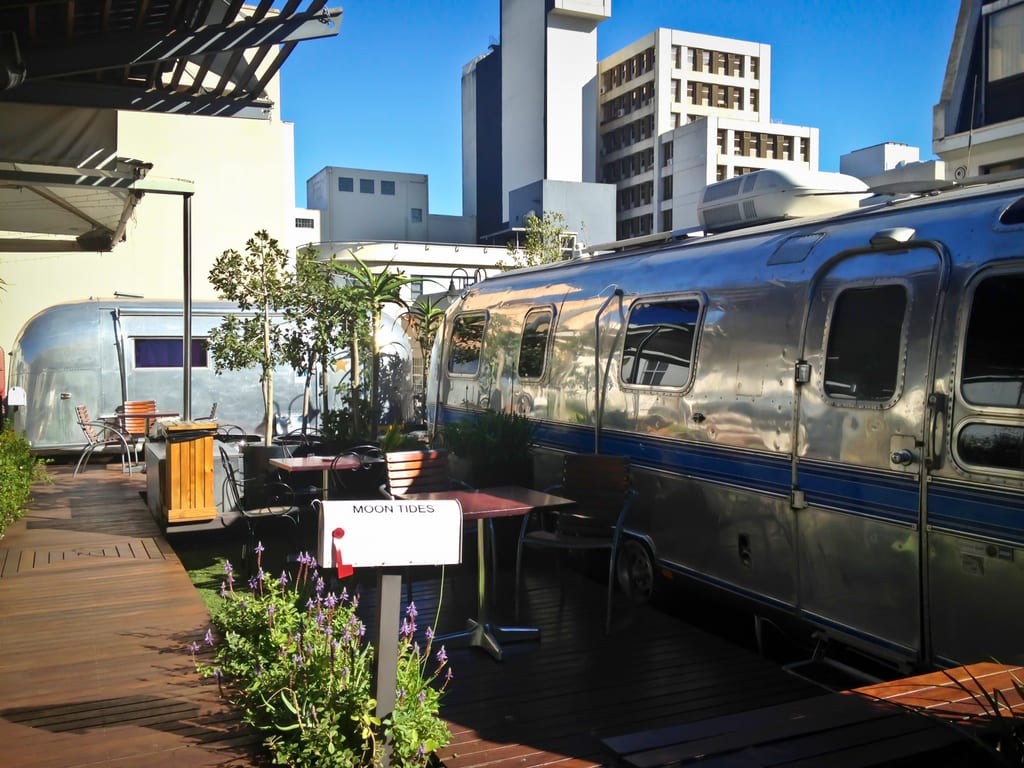 Cape Town, as I’ve said time and time again, is one of the world’s most beautiful cities.  But to really appreciate that beauty, you need to go beyond the city limits — out to the Cape Peninsula, which is home to plenty of beautiful attractions.

We spent our second full day in Cape Town tooling around the top sites of this fantastic region — and I was blown away by just how incredible it was. 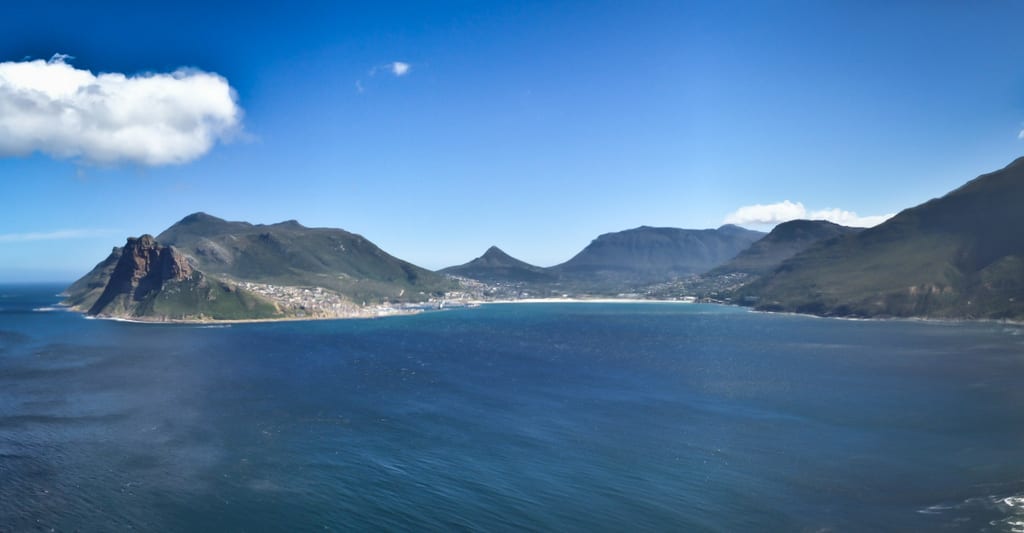 Our first stop was at a lookout point overlooking Hout Bay, just south of Cape Town.  Hout Bay is a town in its own right and it’s actually considered a microcosm of South Africa due to its ethnic and socioeconomic diversity.

If you’re looking for somewhere different to stay in Cape Town, somewhere less frenetic, Hout Bay might be a good choice for you.  And there’s that lovely stretch of white beach! 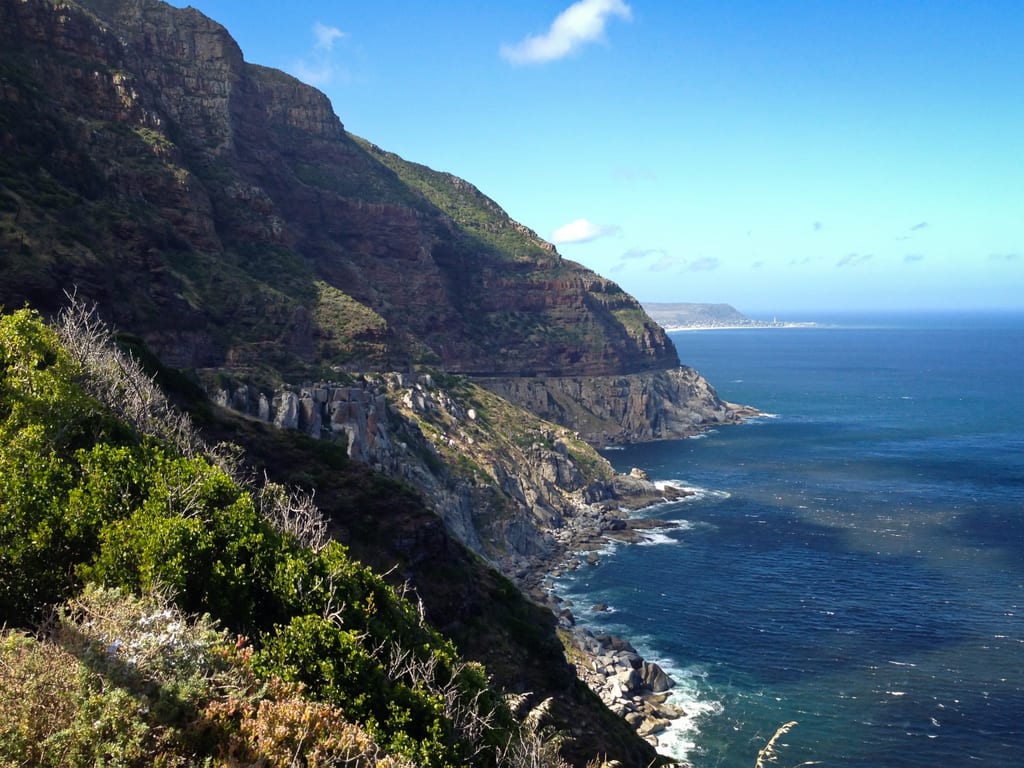 The view of Hout Bay was unforgettable, but this view from the other side might have been even better! 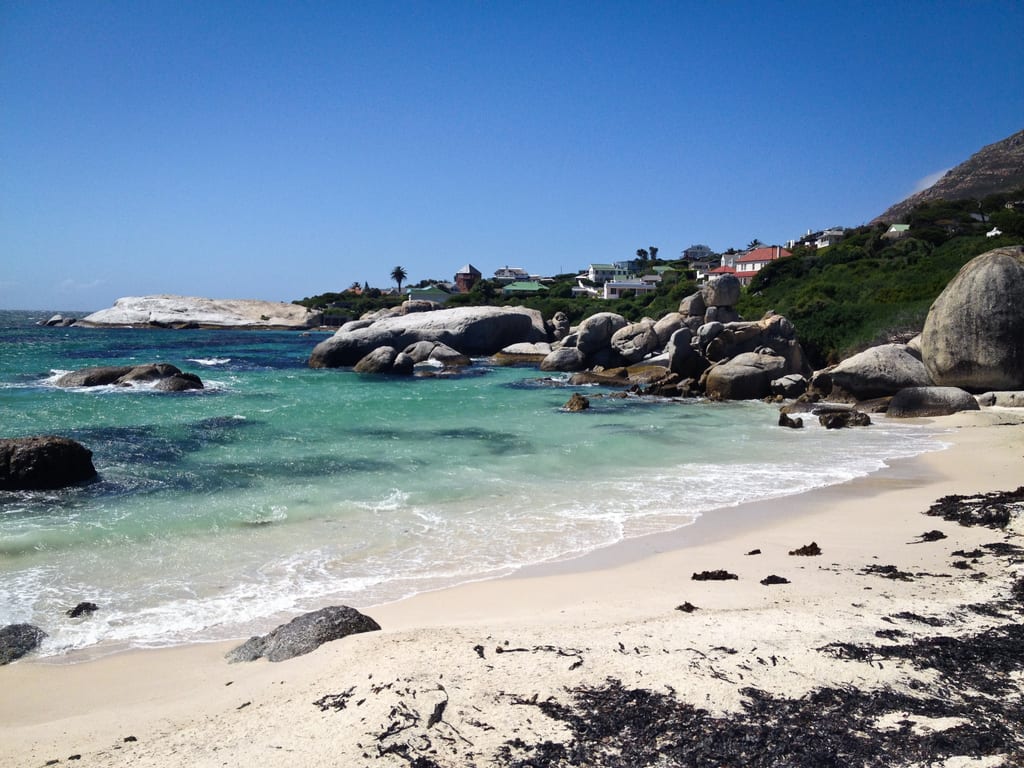 PENGUINS ON A BEACH.  Actual penguins on a beach!!!

Ah.  That kind of burst out of me.  Really, if your circumstances determine that you can only visit only one destination on the Cape Peninsula, make it Boulders Beach.  Where else in the world can you see penguins frolic on a beach? 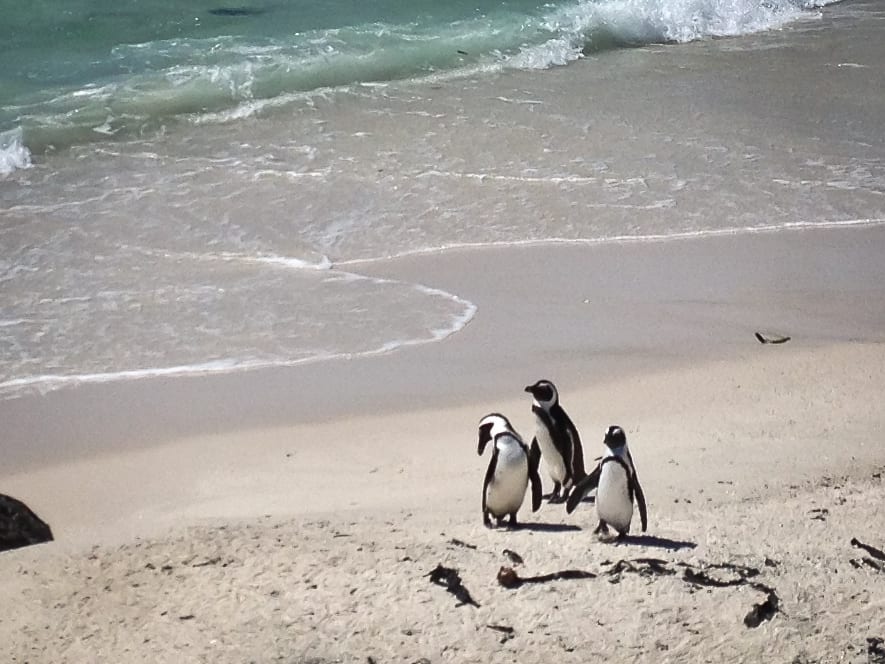 We saw dozens of penguins hanging out on the beach, sometimes waddling along together in groups of three, sometimes even smooching each other!  Plenty more hid underneath the boards and gazed at us with the most adorable expressions.

There is a path for tourists to follow, but the beaches are strictly off-limits so that the penguins can live in peace. 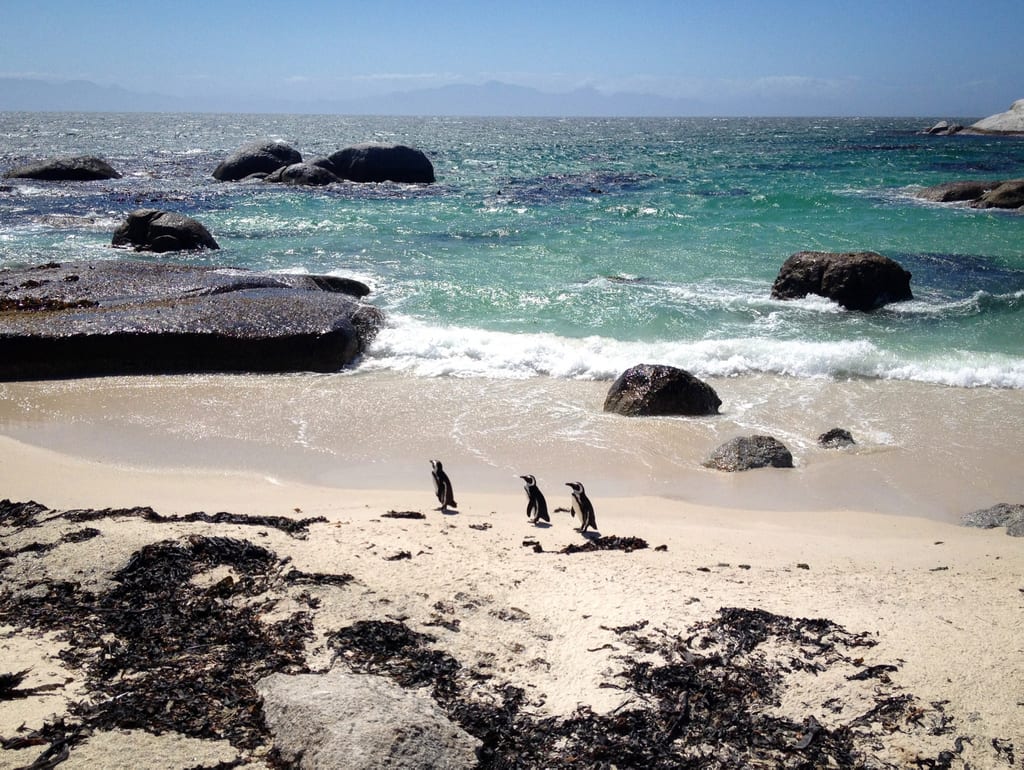 I’ve long known that penguins lived in South Africa, but this was still such a delight.  Most people think that they’d only be able to see penguins in the wild if they went to Antarctica.  Not true!  They’re much closer than you think. 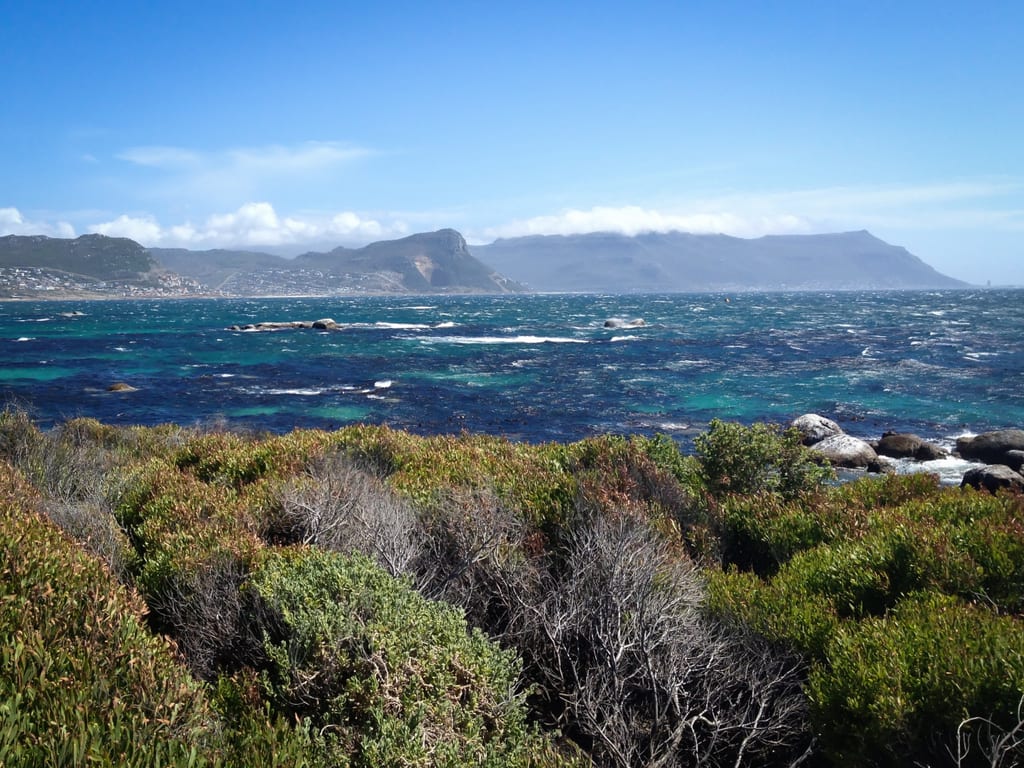 I couldn’t get over the beauty of this part of the Cape Peninsula, even the not-so-famous views from Boulders Beach into the distance. 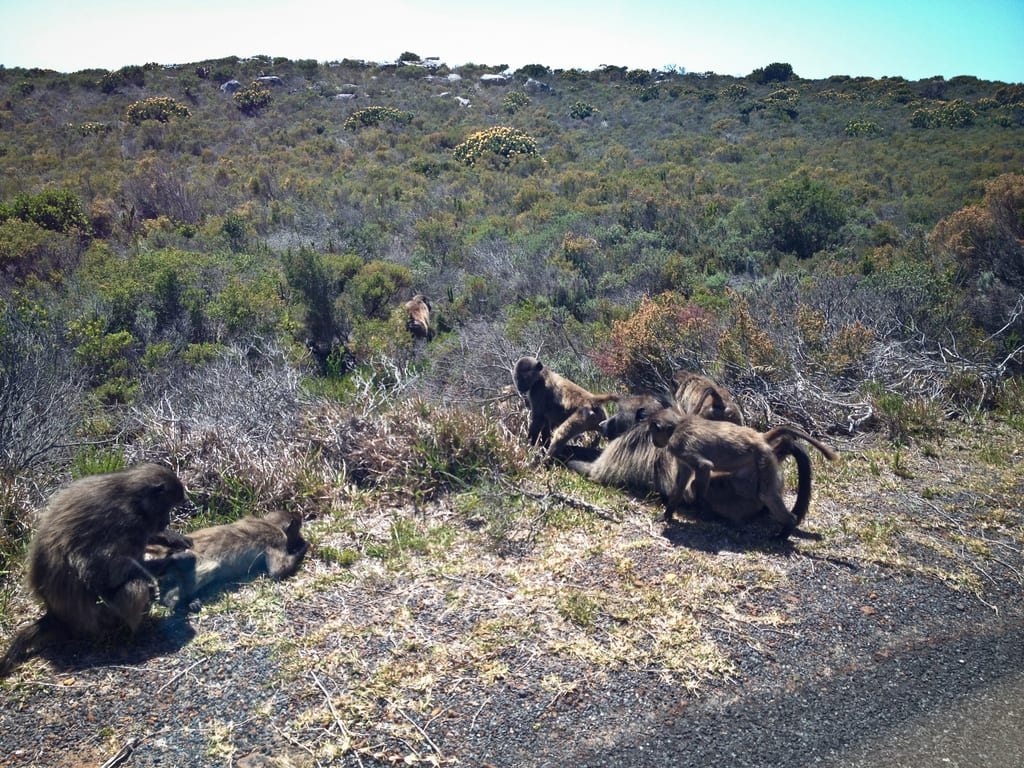 And just in case you forget you’re in Africa — you might be held up by some baboons running back and forth across the street! 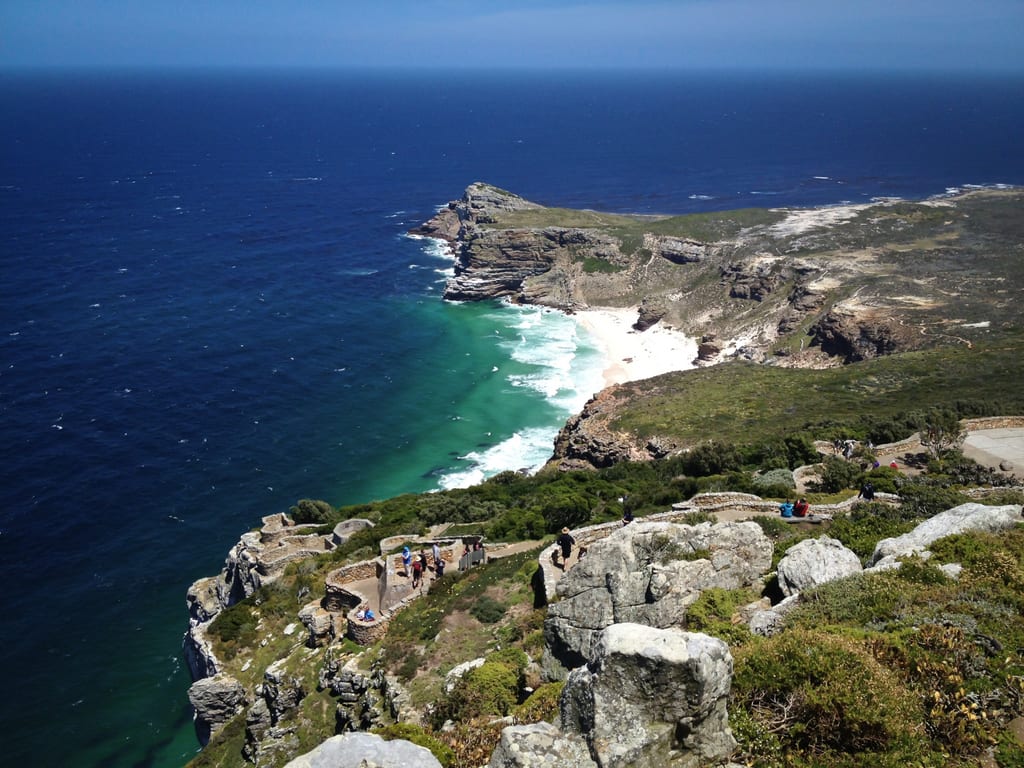 Our next stop was the southwesternmost point in Africa — Cape Point, home to the famed Cape of Good Hope.

I hadn’t thought much of the Cape of Good Hope since the fourth grade (the year we studied the explorers).  This optimistically named point was a hellish marker for sailors, where rough seas made sailing around the bottom tip of Africa quite challenging.

With weather like this, you would never know it. 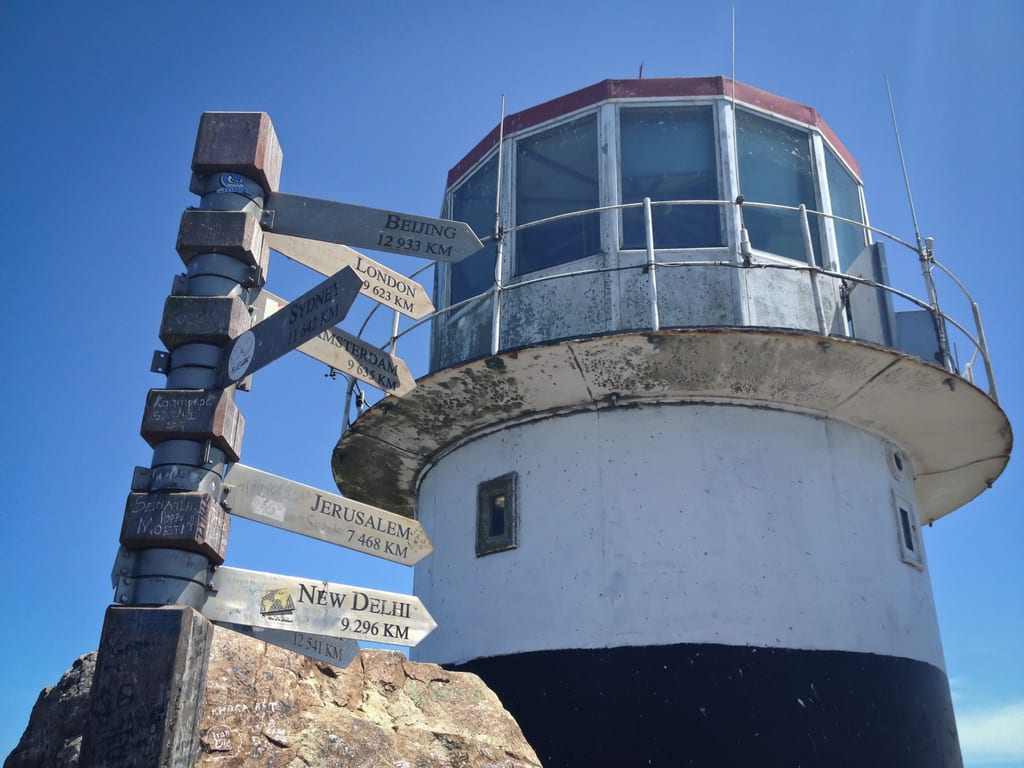 We climbed to the lighthouse on top, marking just how far we were from the rest of the world. 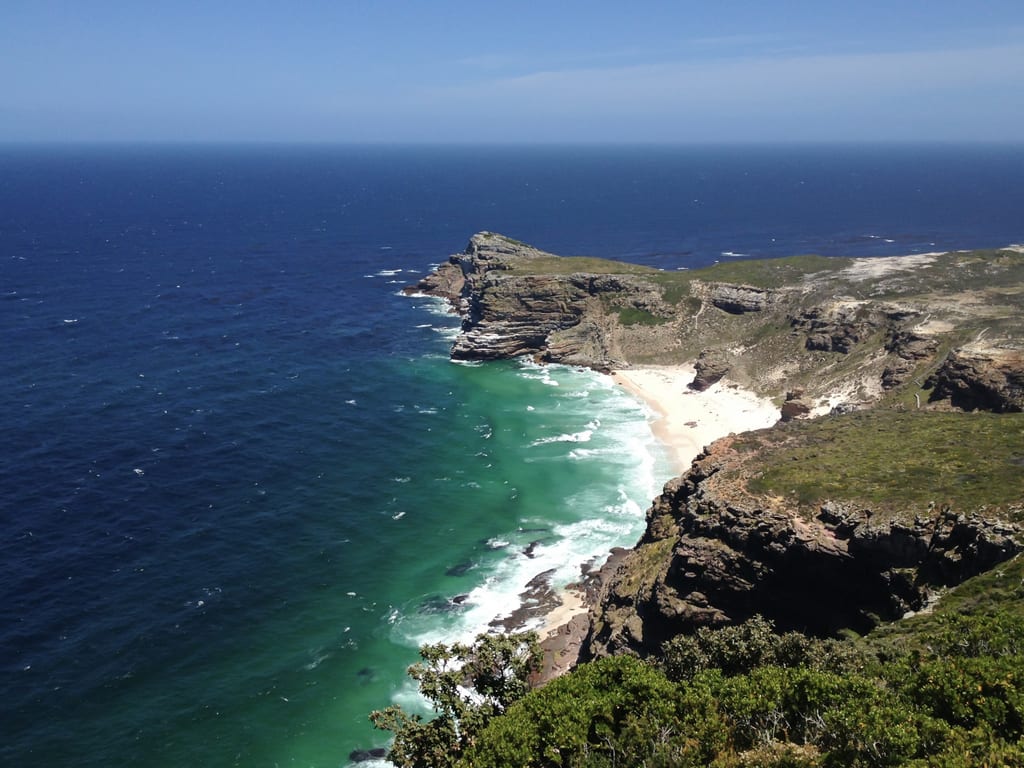 If you want to get down to that beautiful, isolated beach on the Cape of Good Hope, you’ll have to hike down.  I hear the water’s freezing, but that’s a price you pay for a view that splendid! 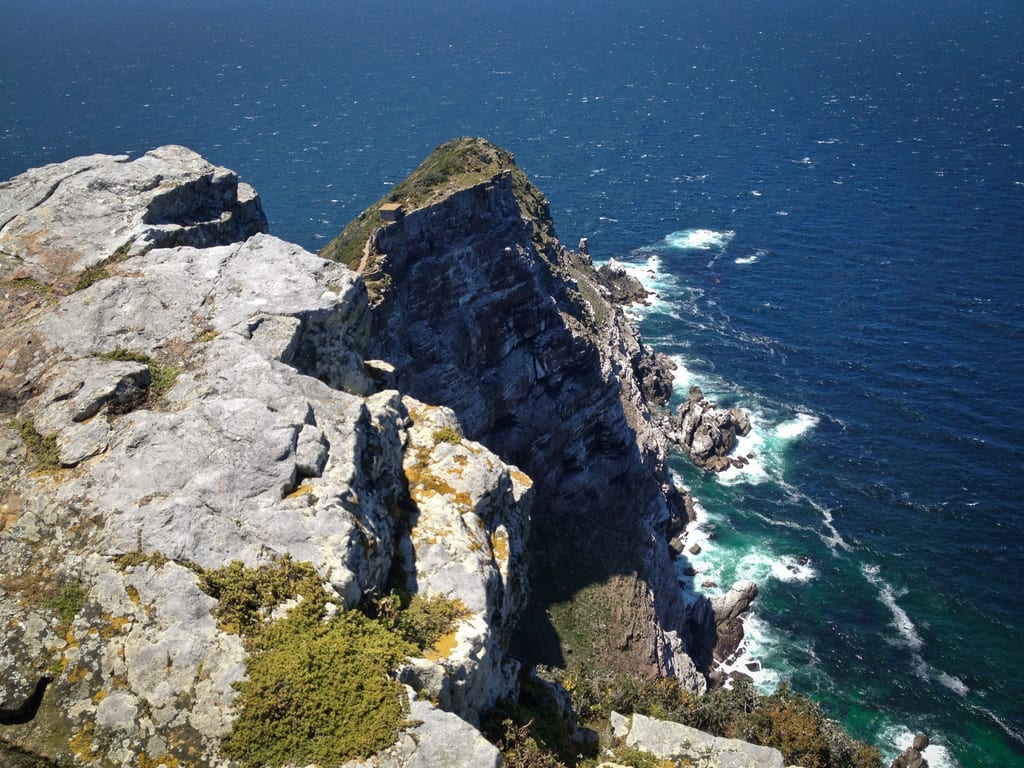 To the other side was Cape Point.  This region is part of the Cape Floral Region Protected Areas, a unique ecosystem that became my 49th UNESCO World Heritage Site. 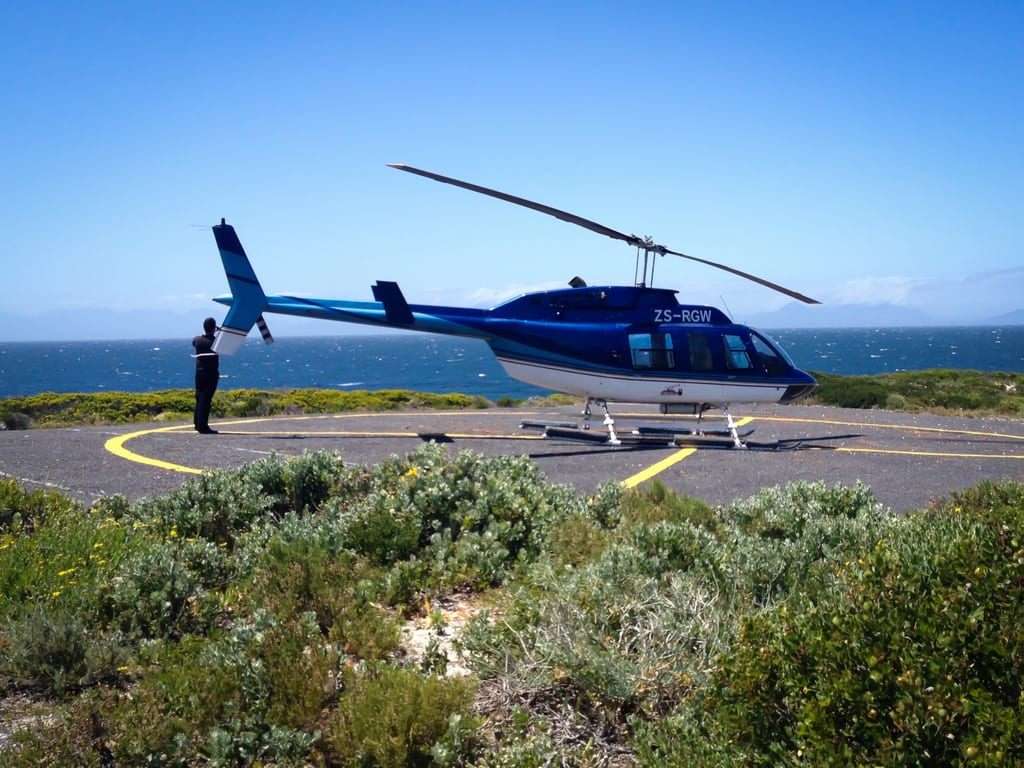 “How long is the ride back to Cape Town?”

“It takes about an hour,” David told us.

Was it actually an hour?  I’ll never find out.  Because just outside Cape Point was a helicopter waiting to take us to the vineyards of Constantia!

We were giddy with excitement — we had no idea this was part of our trip!  What a great surprise. 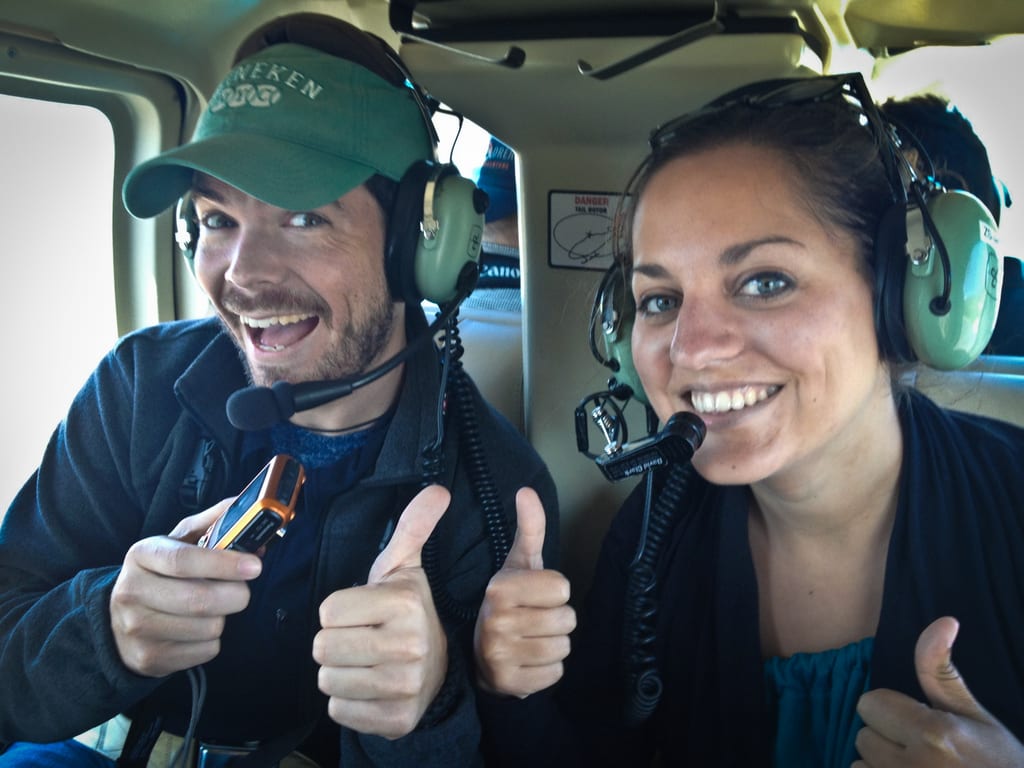 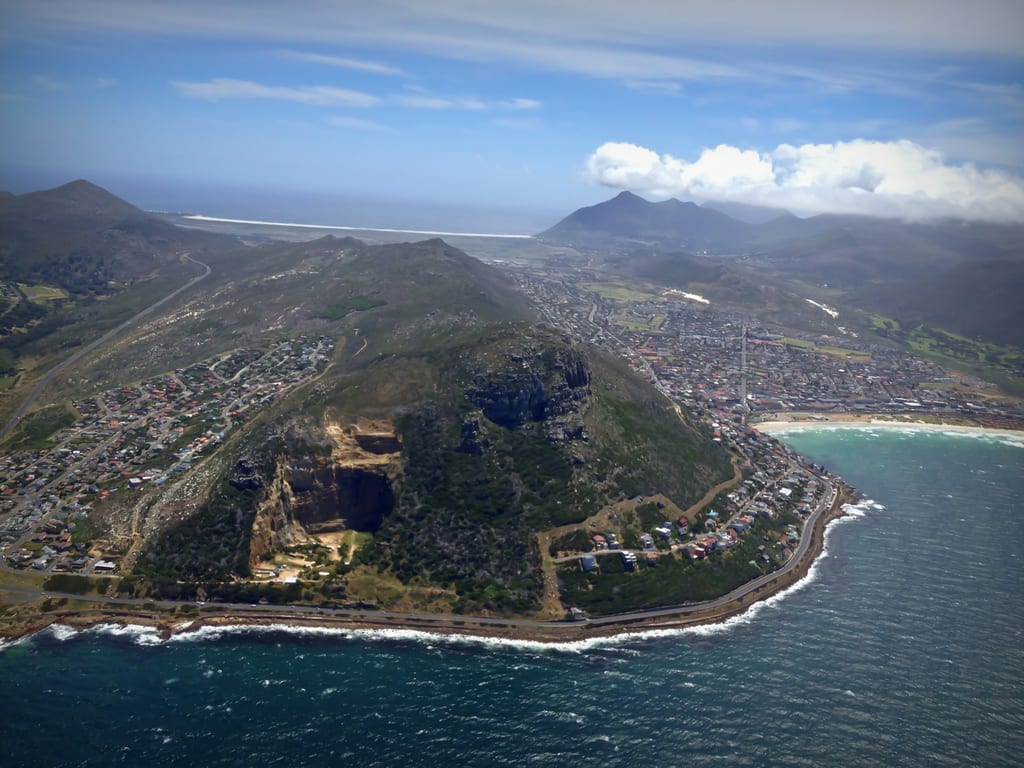 Getting to see the Cape Peninsula from the air was absolutely incredible.  The landscape around here is remarkably diverse — it was like flying around three or four totally different regions of the world.

We started by gliding along the beautiful coastline. 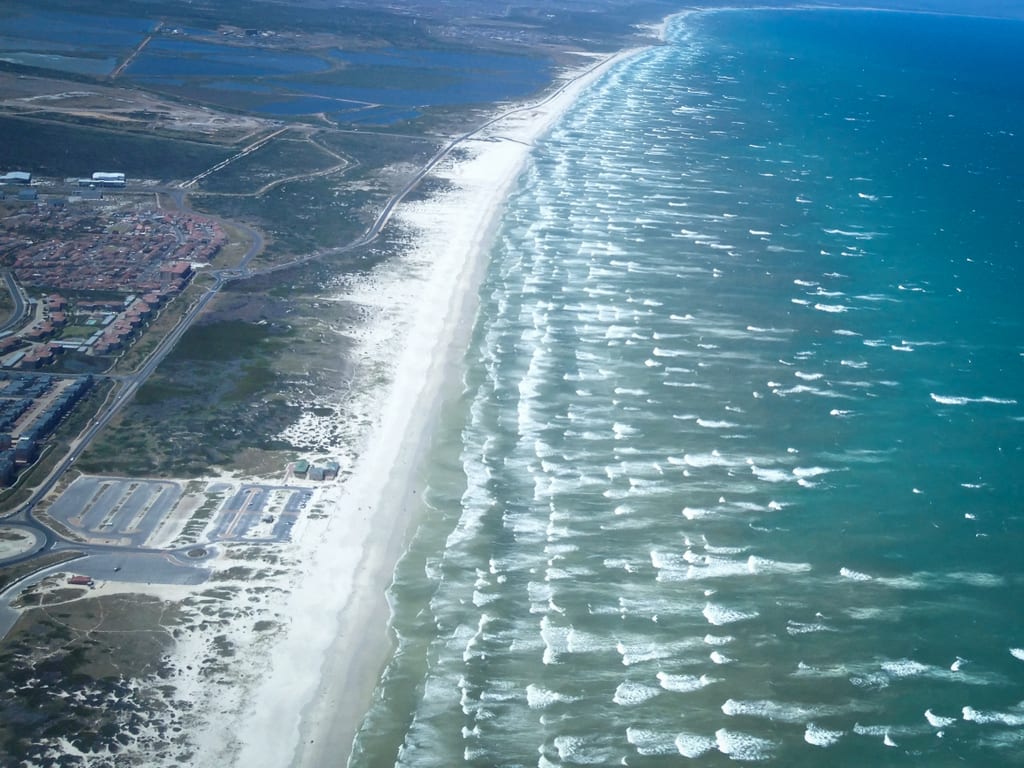 Soon we rounded a corner and started flying above white sand beaches with intense waves. 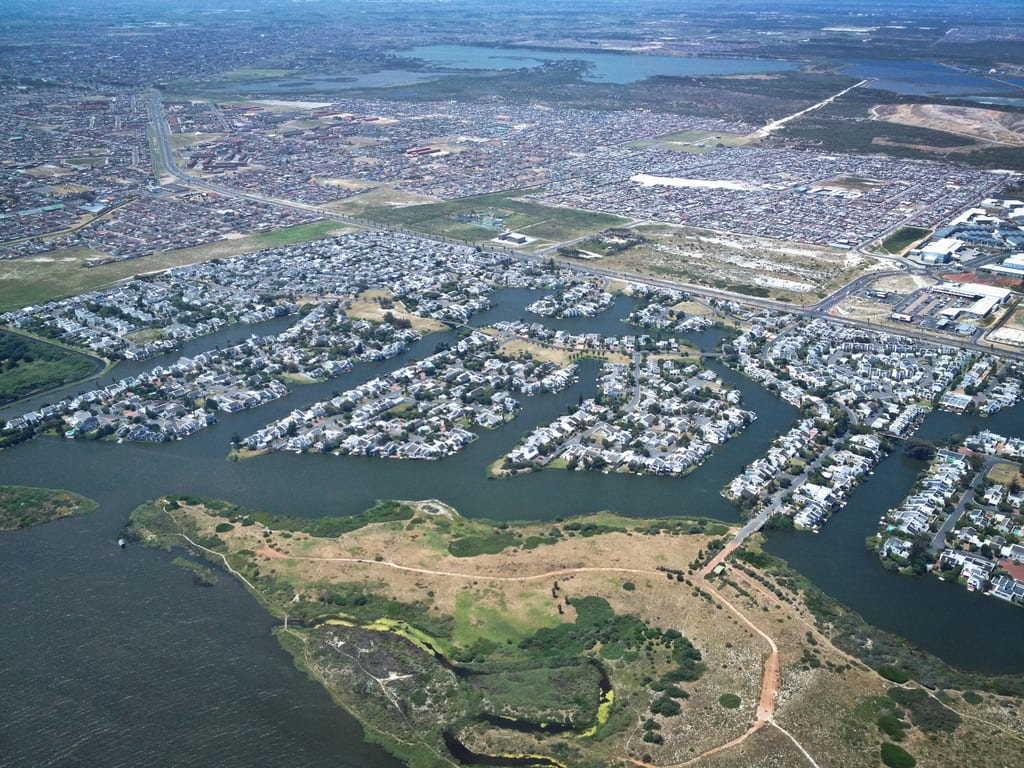 Heading inland, we discovered neighborhoods built on plots of land surrounded by water, looking like something you’d expect to see in Florida. 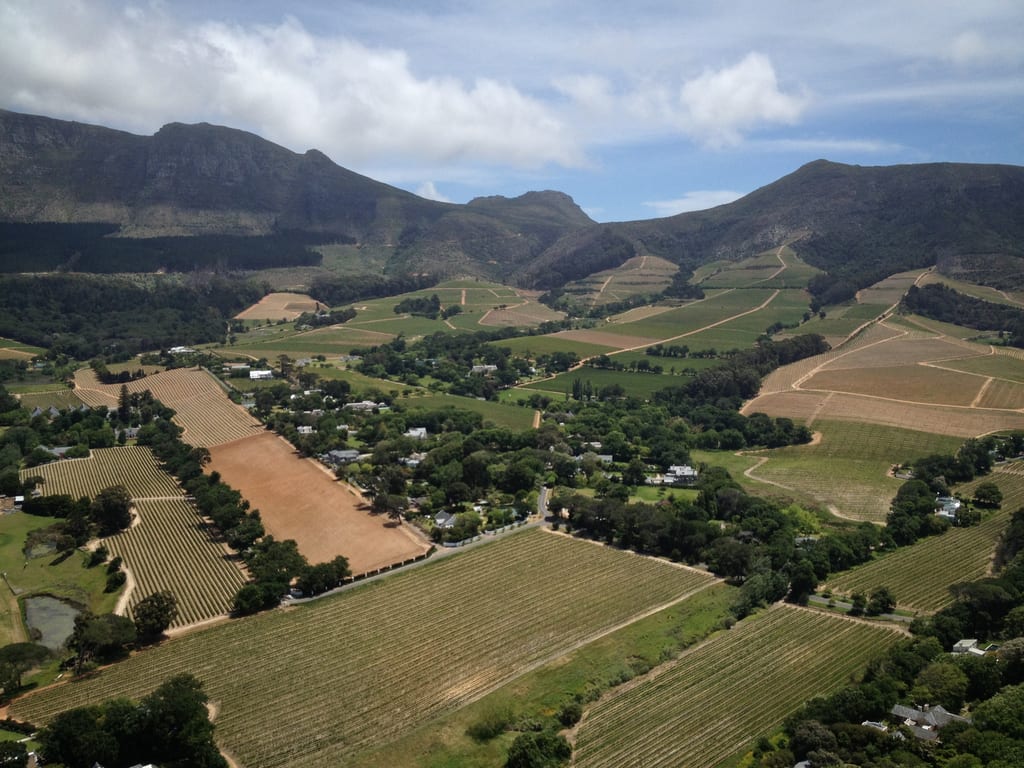 And in seemingly no time at all, we entered a different world — the suburbs were gone, the beaches were nowhere to be seen, and instead we were surrounded by mountains and vineyards.

We landed in Constantia — a suburb of Cape Town and part of South Africa’s winelands.  We had landed on the grounds of La Colombe, a fabulous restaurant catered to the sumptuous wines of the region.

I’ve always wanted to eat at a restaurant with a wine list thick enough to be used as a weapon. 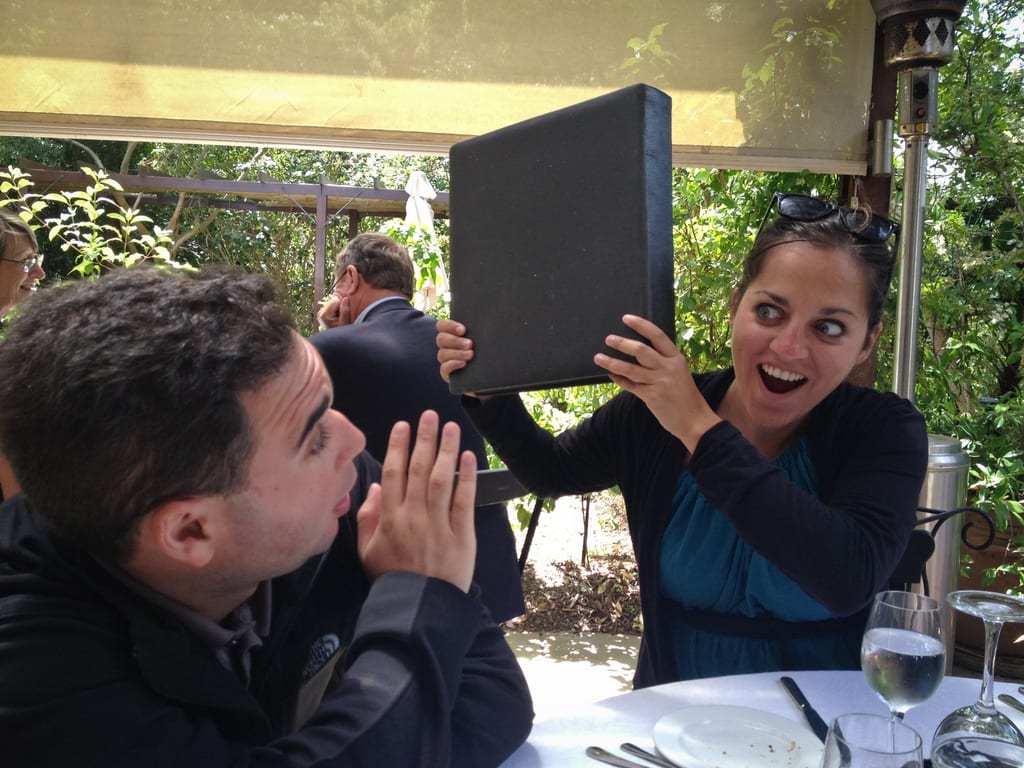 I got a little too into it, and David was scared.

Not going to lie — we were a bit of a shabby group in the restaurant, showing up in our jeans and fleeces and $2 Thailand dresses when everyone else was dressed up in smart casual designer wear.

The wines were poured — South Africa has WONDERFUL Pinotages — and we settled in to enjoy our lunch. 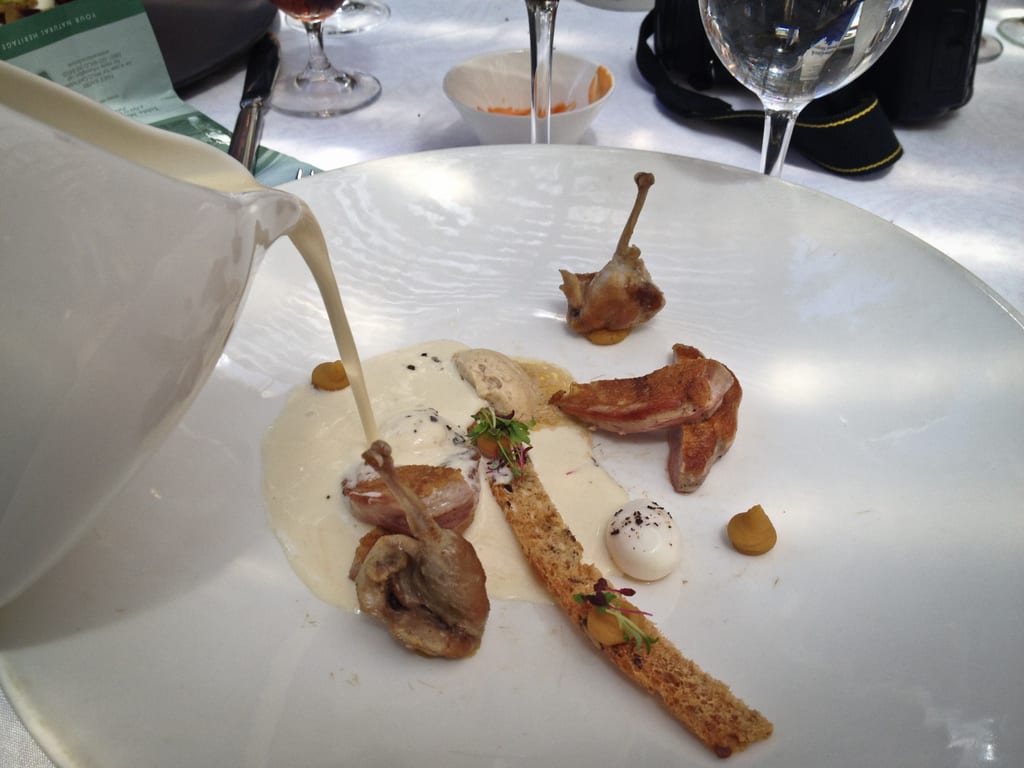 Course one: quail velouté.  A fantastic creamy soup with bits of quail legs and quail eggs as well as pieces of flavorful pork. 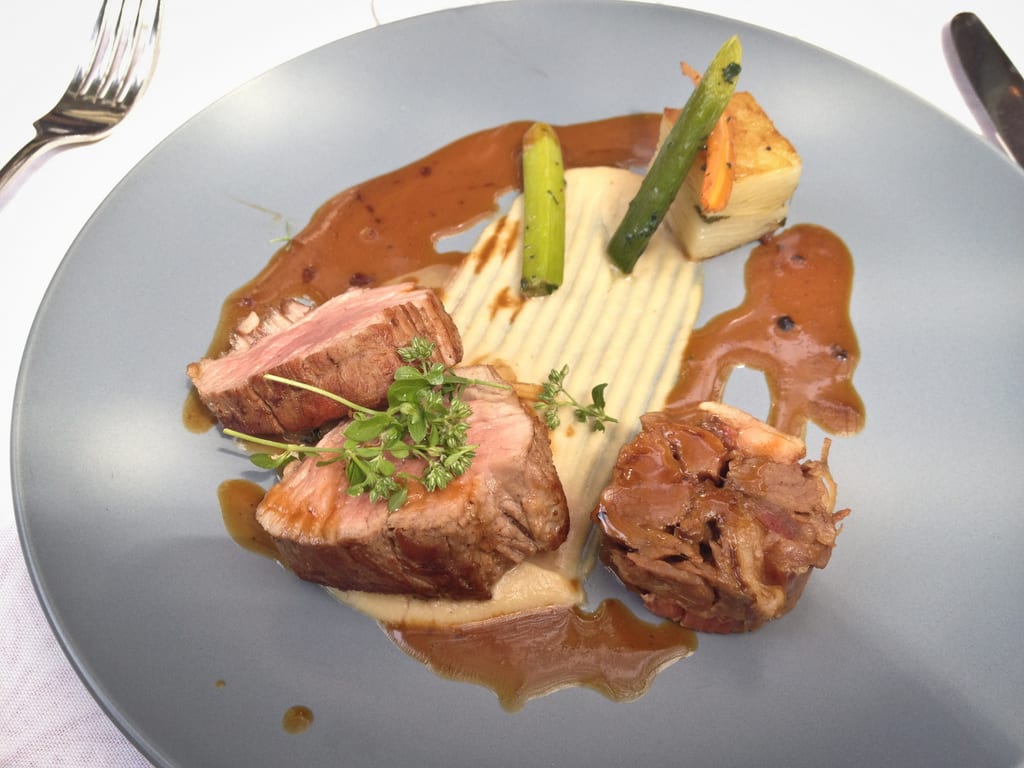 Course two: roasted veal.  I have never had veal so tender that it fell apart on my plate. 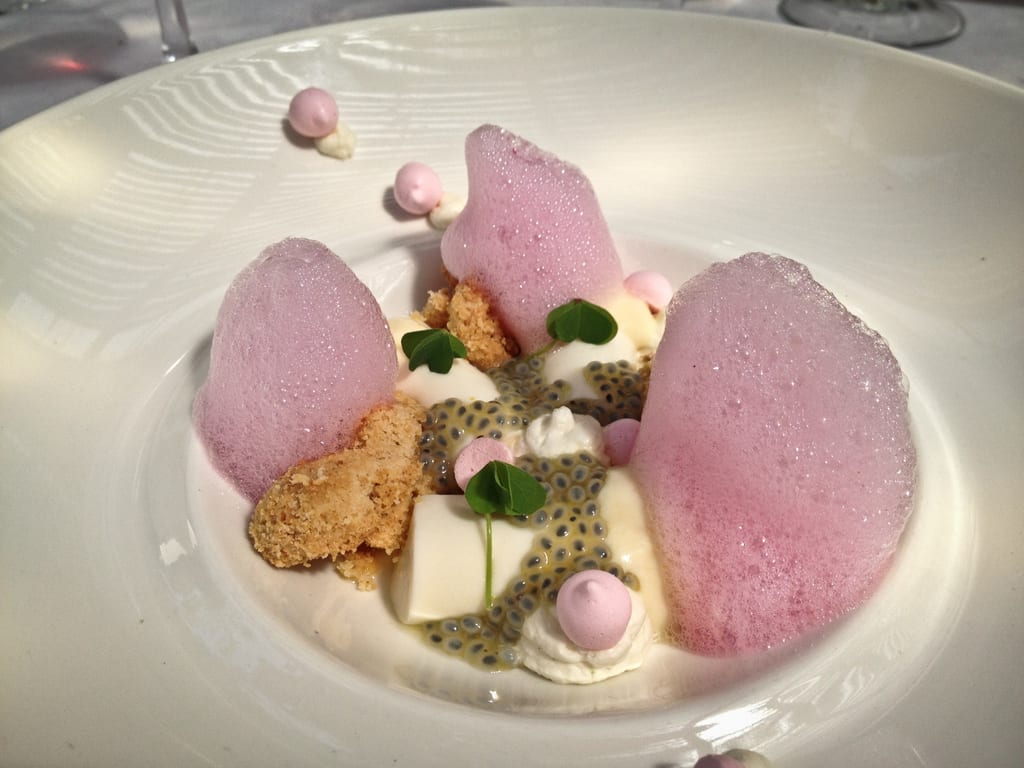 Course three: I couldn’t tell you what this was.  But it involved passionfruit seeds, tiny meringues, marshmallows, and pink foam, and it was just as delicious as it looked.

But that wasn’t all… 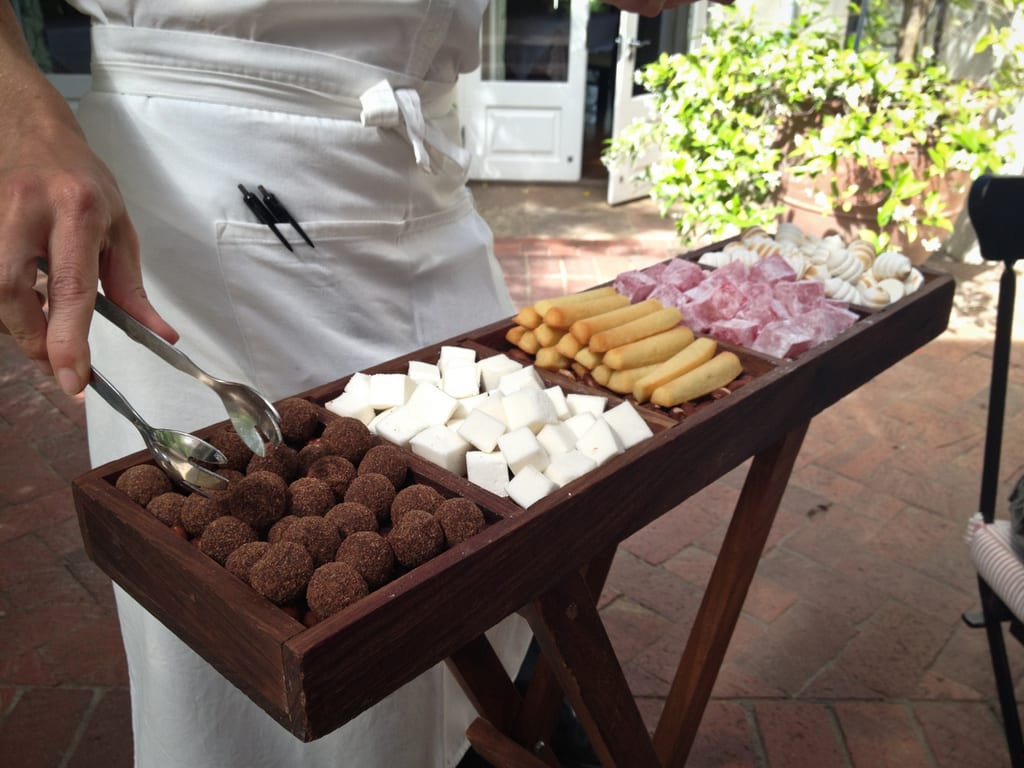 After our plates were cleared, it was time for a selection of petit fours — a post-dessert dessert, if you will! 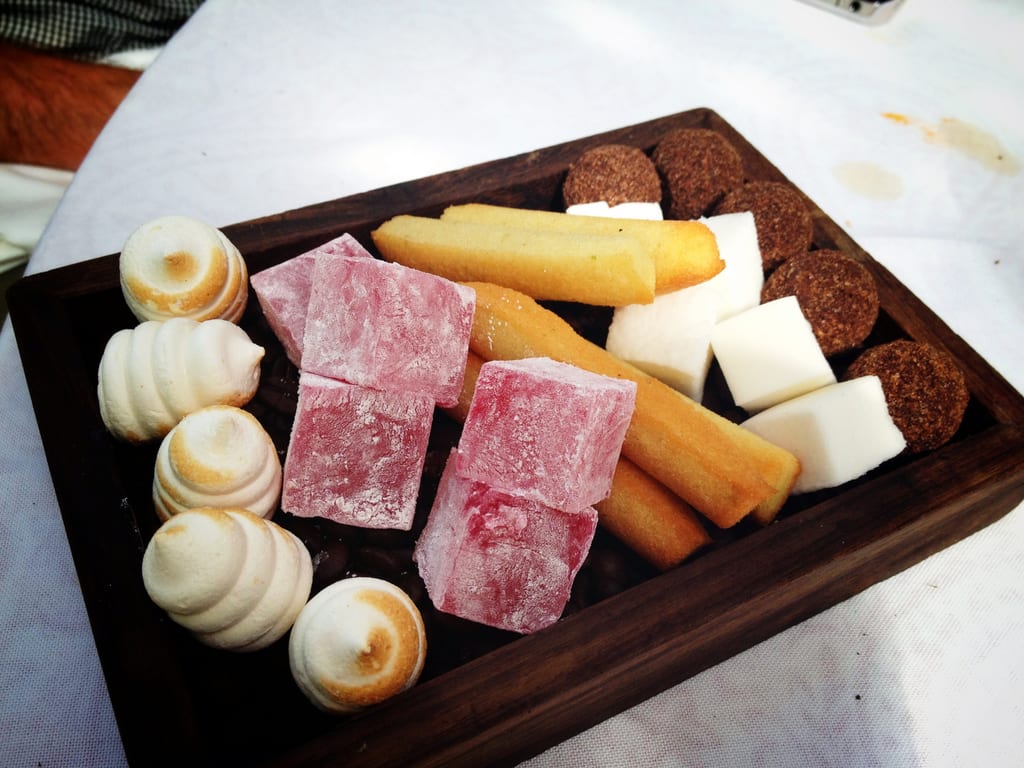 We got to try one of each: maple meringues, rose Turkish delights, lemon financiers, peach marshmallows, and salted caramel truffles.  Each one was divine.  (I also named these desserts on the the 12 best things I ate in 2012.) 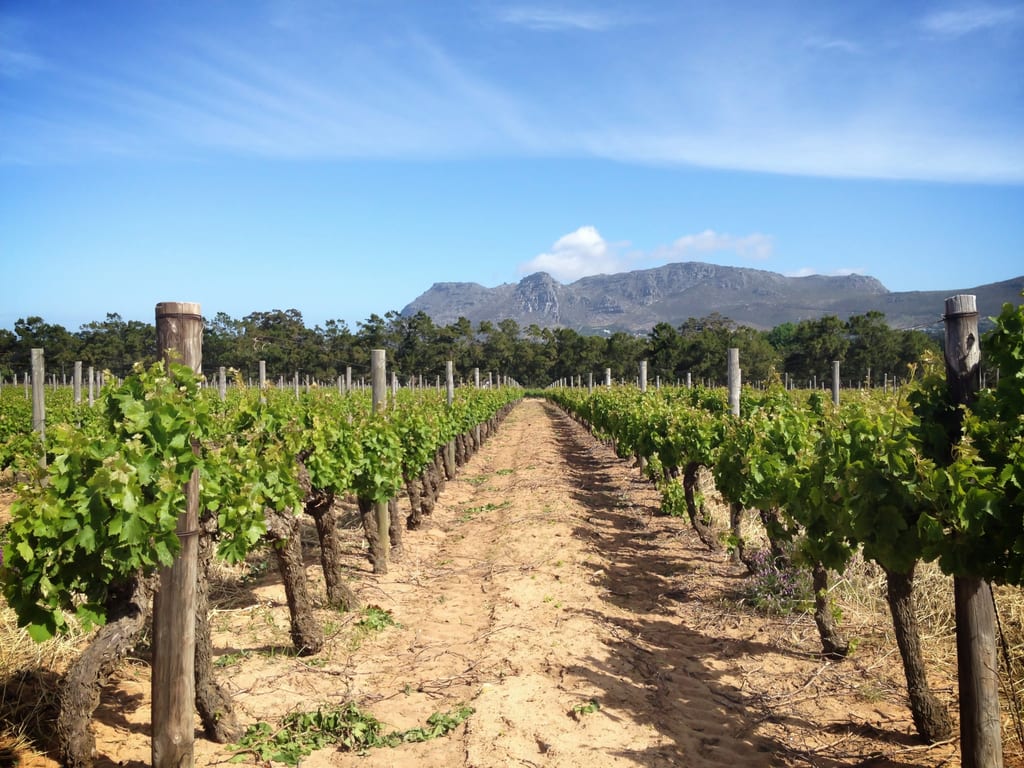 We capped off our amazing meal with a stroll through the vineyards of Constantia.  It could not have been a more beautiful day — the leaves bright green underneath a blue sky, the mountains rising in the distance.

And with that, it was time to get back into the helicopter and fly to Cape Town. 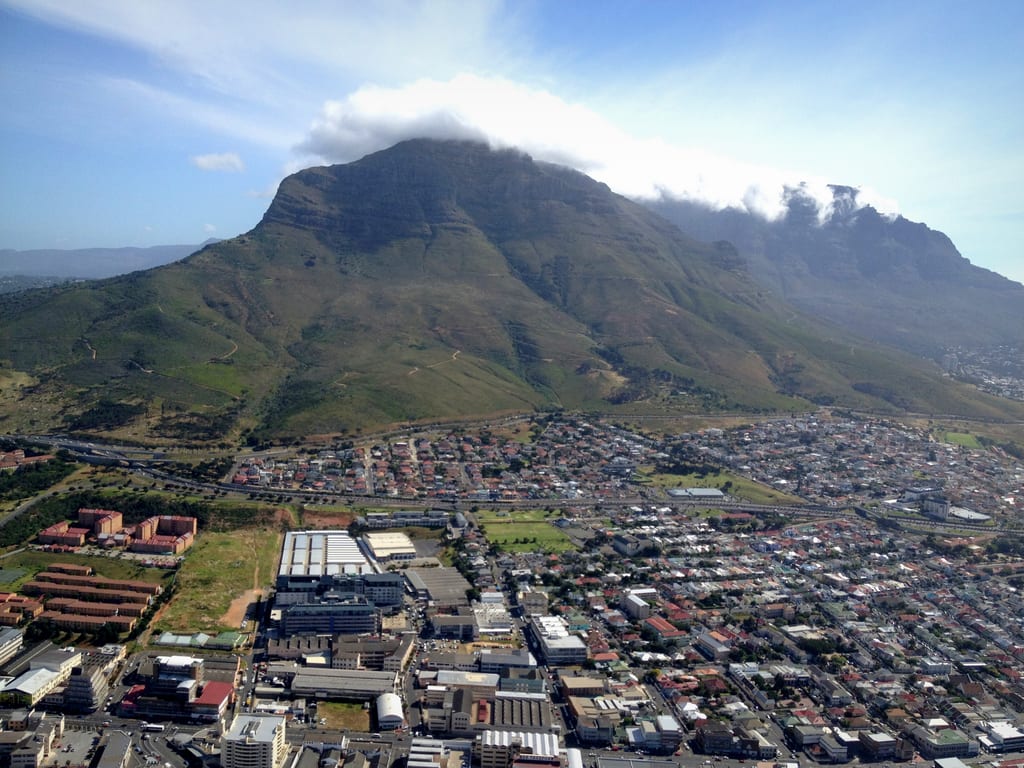 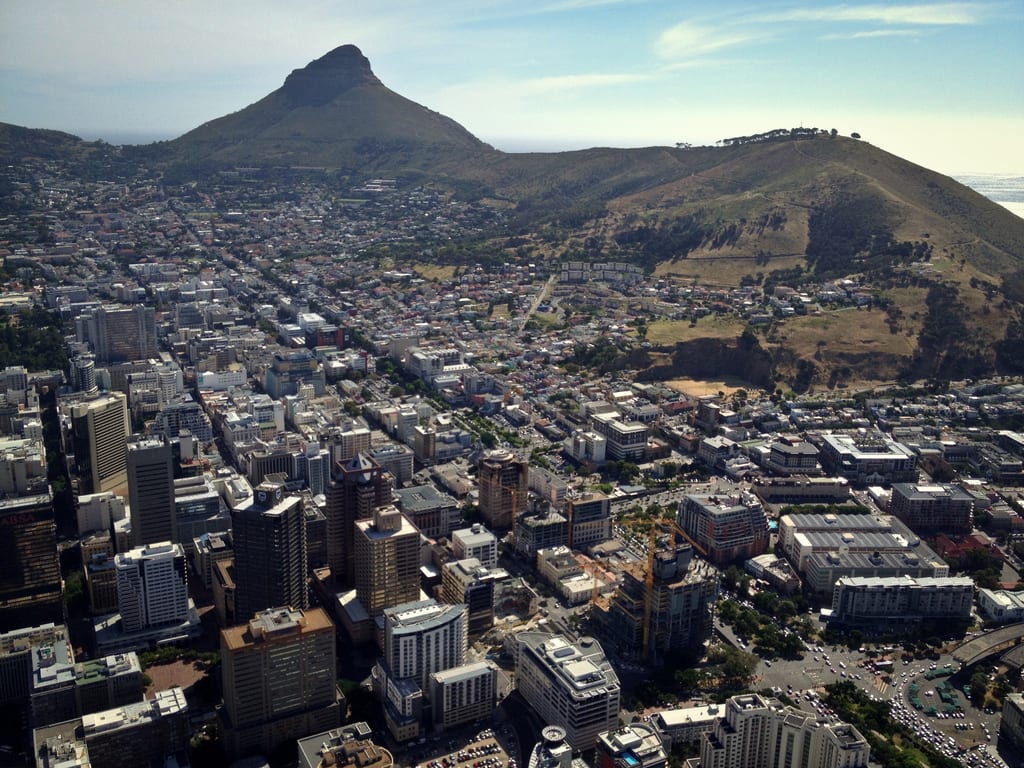 And swept through the central business district, Lion’s Head rising in the distance.  Just before we landed, we could make out Robben Island in the distance, where Nelson Mandela was imprisoned for decades.  It felt like we had come full circle — and with the flight path, we technically had!

Landing on the edge of the ocean, it was the perfect conclusion to our fantastic day on the Cape Peninsula.

Essential Info: You can tour the Cape Peninsula with an organized tour or on your own, but either way, you’ll definitely need a car.  Many of the organized tours include Table Mountain as well.

Cape Town Helicopters offers a variety of tours starting at 675 rand ($76) per person.  A charter flight similar to ours, from Cape Town to Constantia and back, costs 2500 rand ($280) per person.

Many thanks to Visit South Africa for hosting my stay in Cape Town.  All opinions, as always, are my own.

32 thoughts on “A Glorious Day on the Cape Peninsula”