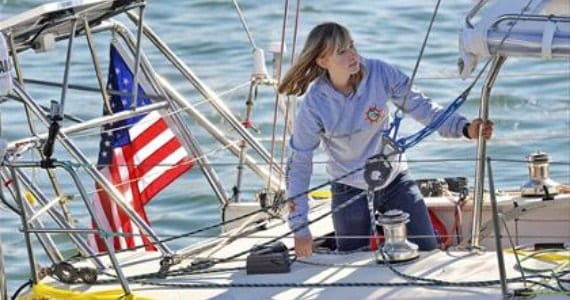 First things first: I’m so thankful that Abby Sunderland was rescued. I didn’t think this would end well.

Abby Sunderland was attempting to be the youngest person to sail solo around the world.  Two days ago, she lost contact and activated her distress signals.  She was feared to be dead or trapped in a capsized boat.  She was rescued by a fishing boat and is currently en route to the island of Reunion.

There has been a lot of commentary about this on the web. The general consensus is that her parents are idiots for letting a sixteen-year-old do this completely alone, and it’s no surprise that something like this happened.

That got me thinking.

Let’s say I travel solo to Thailand and, God forbid, get seriously injured in a bus crash.

Would people be saying this if the crash happened in Connecticut?

I also don’t think the act of solo sailing is as dangerous as the masses are claiming.  Dangerous, yes, but not horrifyingly so.  Here’s the real issue: Abby was reckless.

She planned her trip during the storm season.  She hadn’t trained for the conditions she faced in the Indian Ocean.  Most importantly, she didn’t have another boat trailing her in case of an emergency.

And yes, being sixteen years old is reckless in itself.  As talented a sailor as she is, she was clearly not prepared for a journey this arduous.

Abby’s parents allowed her to be reckless for the worst reason: selfishness.  Breaking a world record was more important to them than their daughter’s safety.  (Not to mention her education. Why isn’t she in school?)

Solo travel has its risks as well. But those risks can be mitigated by planning and preparation, from buying the right gear to reading up on destinations.  If Abby’s dream was to sail around the world, she could have done it the right way: training extensively in rough seas, planning her route wisely, slowly working up to a worldwide sail, and taking a backup crew.  But that wasn’t her priority.

I hope that this serves as a wake-up call to parents around the world.  It’s time for kids to stop risking their lives in the quest for attention and fame.