If you’re going to Las Fallas, you’ve pretty much signed up to be surrounded by both fire and explosions for five days straight. Know this, and embrace it early on.

And it’s not just ordinary fire — those crafty Valencians have figured out several diverse ways to bring more fire into the festival.  Here are all the different kinds of fire explosions at Las Fallas: 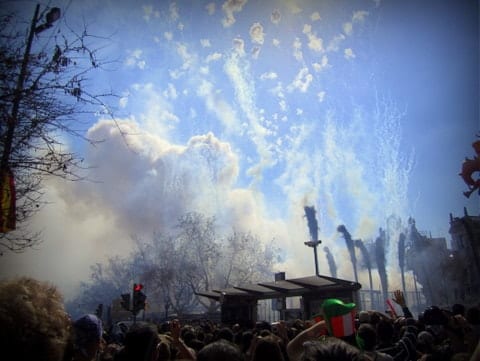 Every day at 2:00 PM, it’s time for the Mascleta — a deafening display of daytime fireworks that lasts for several minutes.

Daytime fireworks?  You bet.  And while the lights might not necessarily light up like they do at night, the smoke makes it especially stunning against the bright blue Valencia sky.

And it is LOUD.  You hear it from the edge of the city (I heard it loud and clear from the beach one day), but right in the middle of the square, it will knock you over with its loudness.

Check it out on (loud) video — the crowd reaction at the end is great, too.

The Mascleta is not for the faint of heart.  I was glad to have witnessed it, but between the noise and the crowds, once was enough for me.  If you go, make sure you get there early — we were there by noon. 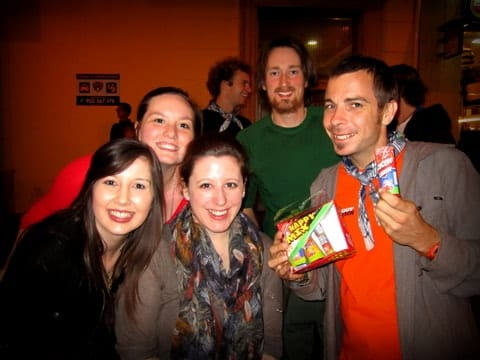 Valencia during Las Fallas is one of the noisiest places I’ve ever been — you hear a firecracker explode roughly every ten seconds or so.  You even see little kids lighting ones of their own!

So of course, our group decided to set off one of our own.  Our Busabout tour leader Dax went and purchased a “Happy Mix” from one of the stores.

(Note: not all firecrackers are created equal.  One of the guys, Ric, bought a cheap box and later realized they were tiny sparklers for kids.  “Take that!” he’d shout before throwing a teeny tiny one down the street as we laughed and laughed.) 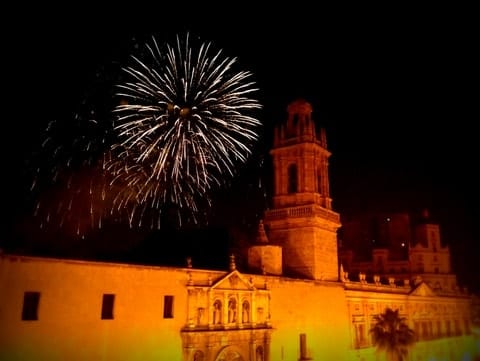 These are REALLY good displays of fireworks — on par with Boston on the Fourth of July (not to mention Hoi An, Vietnam, during Tet).  But after all the explosions throughout the day, it’s kind of hard for fireworks to measure up.

Still, it was great. We had a FANTASTIC view of the fireworks from Dax’s room at the Purple Nest Hostel (and this is something you’ll only get to experience with Busabout, as it’s their room), but for the second day, we decided to go out onto the bridge. 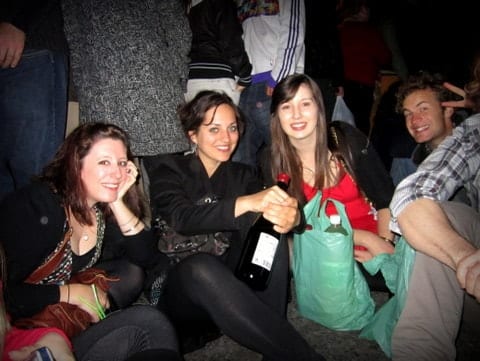 Now, THAT was fun — with the lax open container laws (all but the final night!) and the camaraderie, the hottest scene was on the bridge over the river park that night, everyone swigging from their individual two euro bottles of red wine (which may have been mixed with coke for calimochos). 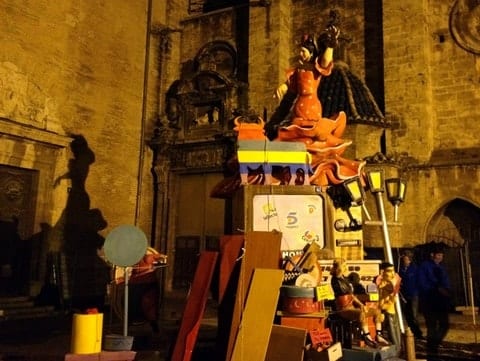 The crema, or the final burning of the fallas, is the culmination of the festival and takes place on the final night.  The fallas are burned one by one, the small ones first, and the winners of the competition last.

We were lucky enough to see a few of the fallas burn, including the one of Leonardo da Vinci’s head, which won second place — but as far as I was concerned, the best burning was one of the little Flamenco-themed fallas around the corner.

Probably in part because they doused the entire thing in fireworks, gunpowder, and gasoline before they lit it on fire.

Brace yourself before you watch this video.  I was SO not prepared for what happened here!

It’s not easy to recover from a festival like this — after arriving in Barcelona, my friend Justin and I remarked about how strange it was to walk down city streets without the echo of firecrackers all around us.

That said — I would love to hear those firecrackers again. I can’t wait to go back to Las Fallas next year and have my eardrums blown out once more!