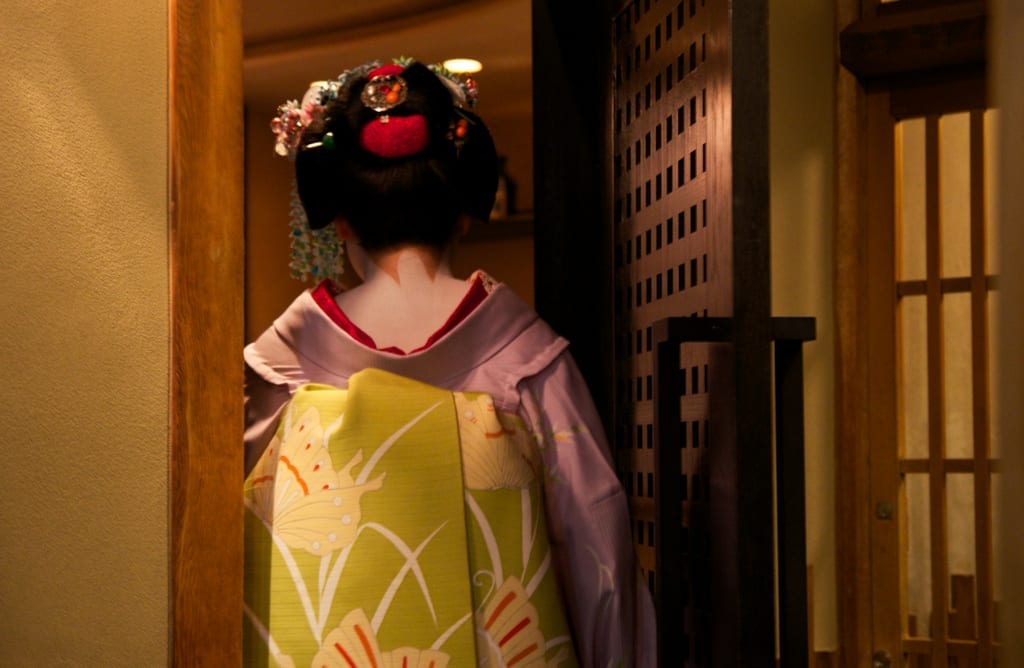 Out of the corner of a narrow Kyoto alley, she appeared. A woman in a traditional kimono, her skin like alabaster, her lips a perfect crimson bow. Her hair defied gravity in perfect lacquered waves decorated with floral ornaments.

She was the marshal of her own inadvertent parade. Behind her a crowd of Japanese and foreign tourists ran after her, clicking their cameras as she dutifully ignored them, taking tiny steps as fast as her wooden platform sandals would let her.

Our eyes met for a fraction of a second. Then she continued glancing back and forth, self-preservation dictating her movements rather than curiosity.

Until she passed us, it didn’t hit me that she was a geisha – or, rather, a maiko (apprentice geisha), as we deduced by her ornate hair ornaments and long patterned obi (kimono belt). She was so dazzling, she made my mind stop for a moment.

This was why we were out in the first place.  Mario, Becki and I were “geisha hunting,” trying to spot Japan’s most elusive entertainers en route to their evening appointments in Gion, Kyoto’s traditional geisha neighborhood. A tip from Becki brought us to the alley running along the western side of the river. We thought we were prepared. We had no idea.

Geisha are not prostitutes, as is a common belief among foreigners (or anyone who has read Memoirs of a Geisha). Geisha are, in fact, hostesses trained in a variety of traditional Japanese arts as well as conversation, games, and entertainment. They are paid for their time and companionship – no, that’s not a euphemism – and are simply the most sensational company that money can buy.

As you might expect, this company comes at a hefty fee. You can expect to pay upwards of 50,000 yen ($500) for an evening in the company of a geisha.

There are approximately 1,000-2,000 geisha working in Japan today. Though these numbers are nowhere near their peak of 80,000 during the 1920s, they are by no means a dying breed. Enough women undertake the long training process to become geisha to keep their numbers sustainable.

Could anything like a geisha exist in western society? Very likely not, as we have no hostess culture with tacitly understood boundaries between paid companionship and sex the way that contemporary eastern societies do. But if this did exist, what would a western geisha be like?

I have in my mind a woman that looks and dresses like Dita von Teese. She’s perfectly made up in spotless retro attire, she is the single most witty conversationalist you’ve ever met, and she plays the piano by ear and leads singalongs with her beautiful voice. Maybe she tap dances as well. She definitely knows her share of card tricks. She’s a throwback and absolutely lovely.

But that night in Gion, everything fell into one moment. After the maiko passed us, I woke up and joined the parade, snapping photos desperately and praying that my settings were in the right mode to capture her swift movements.

I clicked my shutter as the maiko slipped into a bar for her evening appointment — and then she was gone.

We never saw a geisha or maiko again.