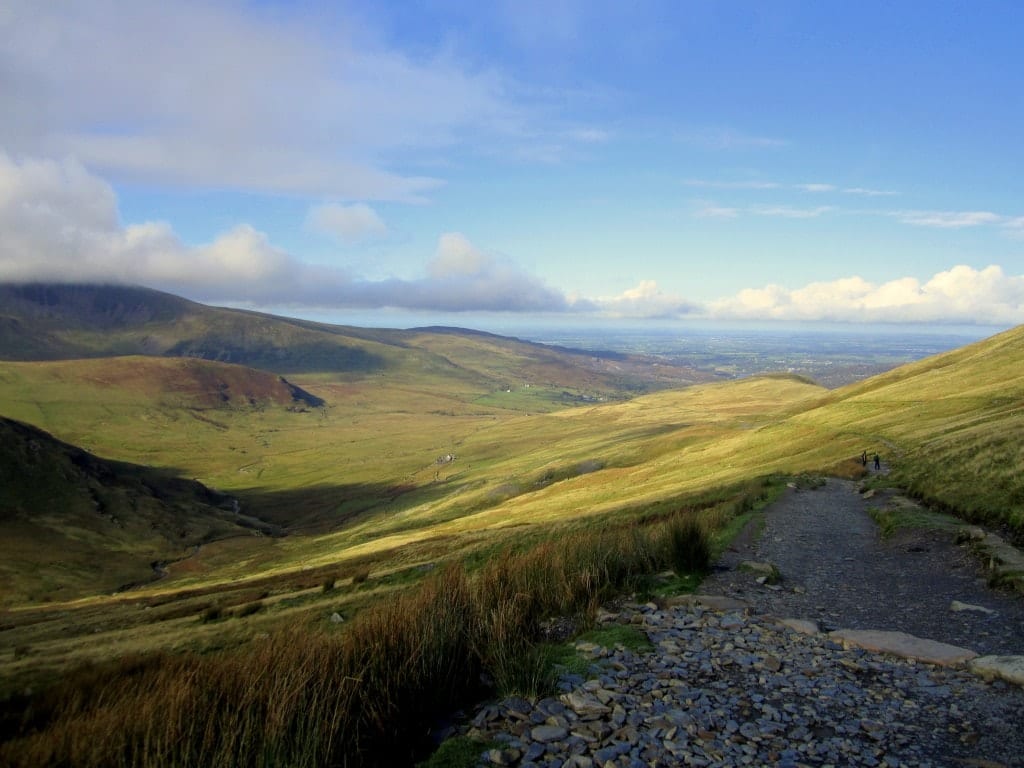 Climbing Mount Snowdon is one of the top adventures Wales has to offer!  At 1,085 meters, Mount Snowdon is the tallest mountain in Wales (and taller than anything in England as well — only Scotland has higher peaks!), and climbing it is a rite of passage for adrenaline junkies in the UK.

Mount Snowdon is part of Snowdonia National Park, the most popular attraction in North Wales.  This was my introduction to Snowdonia, and climbing Snowdon was a great was to get introduced to the park.

Dave and I climbed Snowdon yesterday, and I’ve put together a guide for would-be climbers. 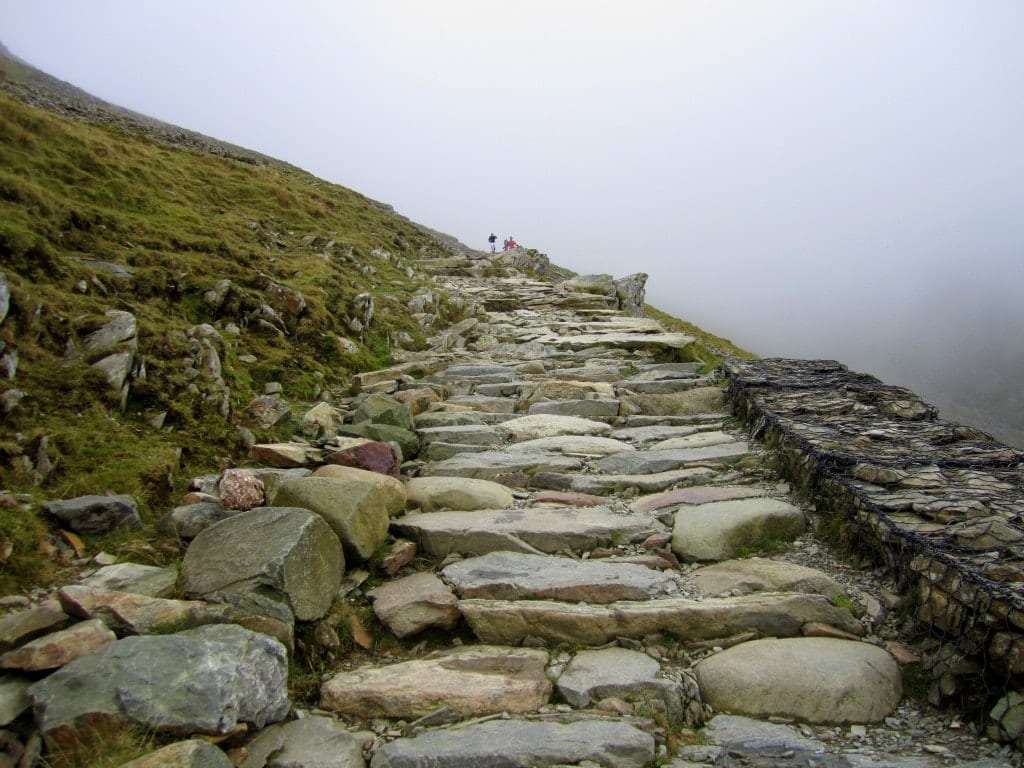 Dave and I decided to take the Llanberis Path — the longest and most gradual path (and therefore an easier path) with a return time of about 5-6 hours.

Know this — just because it’s the easiest route, it doesn’t mean it’s an easy walk.  It’s not.  All of the routes require a lot of work, and we knew that going in.

Every route finishes with the steep climb to the summit.  The difference is that the first half of the Llanberis route is much longer and not nearly as steep.  (But honestly, the most difficult part of the entire climb was the very steep driveway at the beginning of the route!  Don’t let it dissuade you!)

We started climbing at 11:00 AM and returned at 5:20 PM, having taken a few breaks along the way and spending about 45 minutes at the top.  That was fine for us, but ideally, you should start a bit earlier if you can, especially in darker months.

When taking the Llanberis Path, be sure to stop at the sensationally spooky Llyn Padarn, the lake by the start of the trail.  It looks like something out of New Zealand. 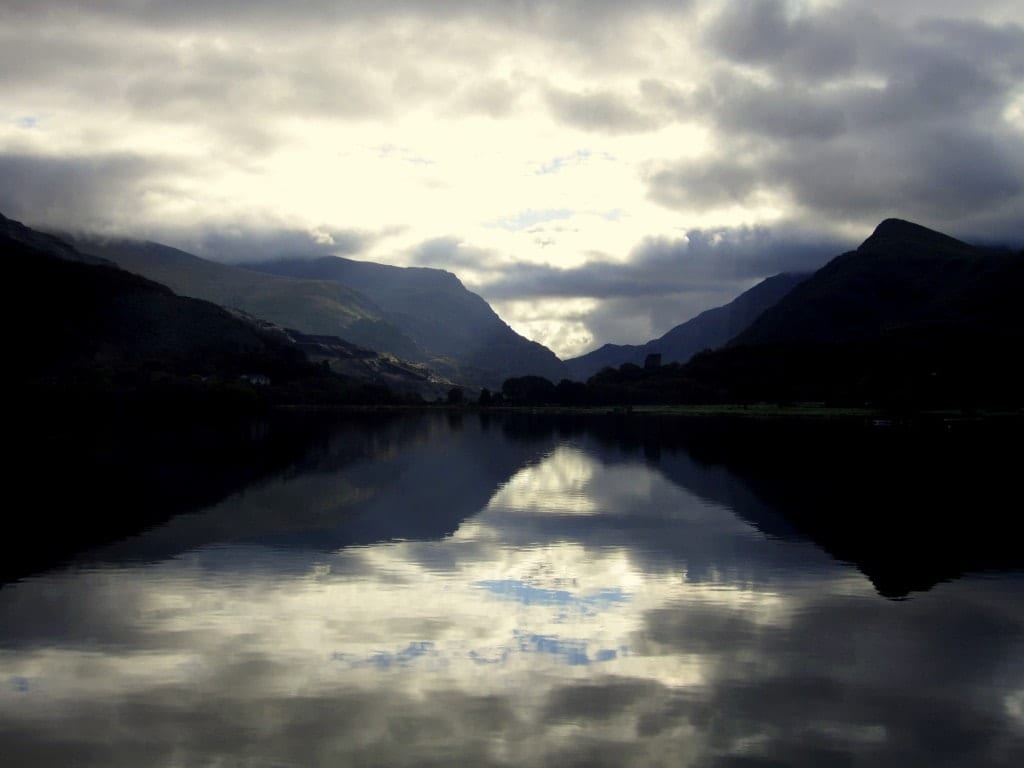 The scenery of Snowdon through the Llanberis Path was simply astounding.  A few of my favorite shots: 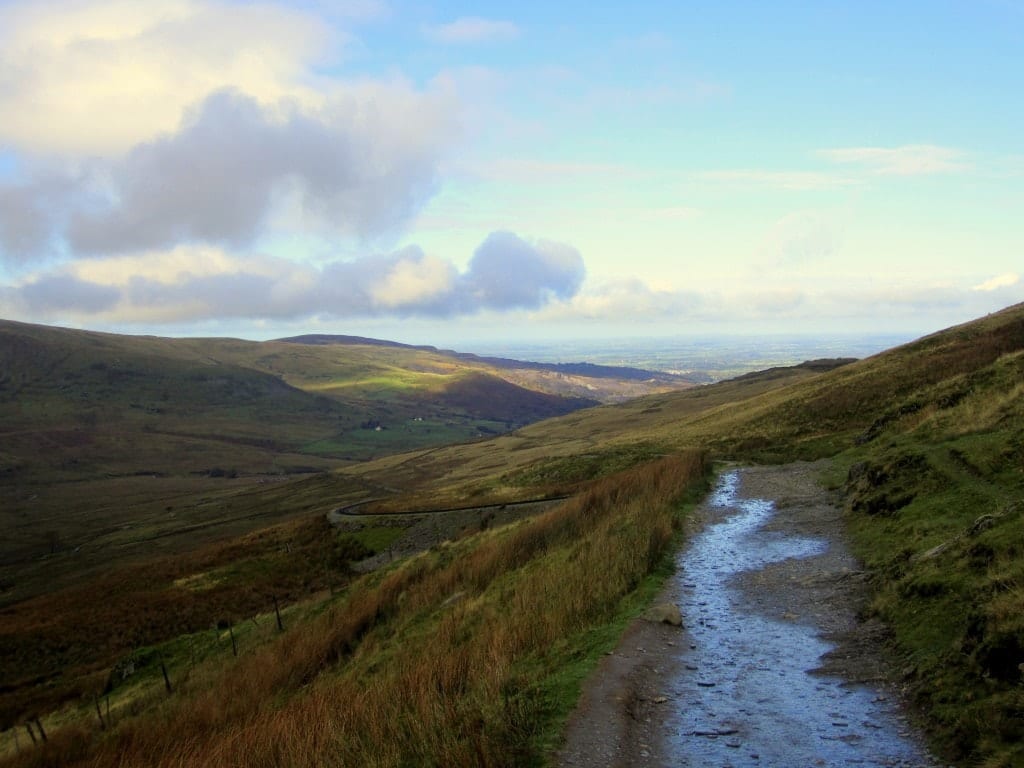 Though it was overcast in the morning, the sun was right behind us as we climbed the mountain, each hill gradually turning bright green in the sunlight. 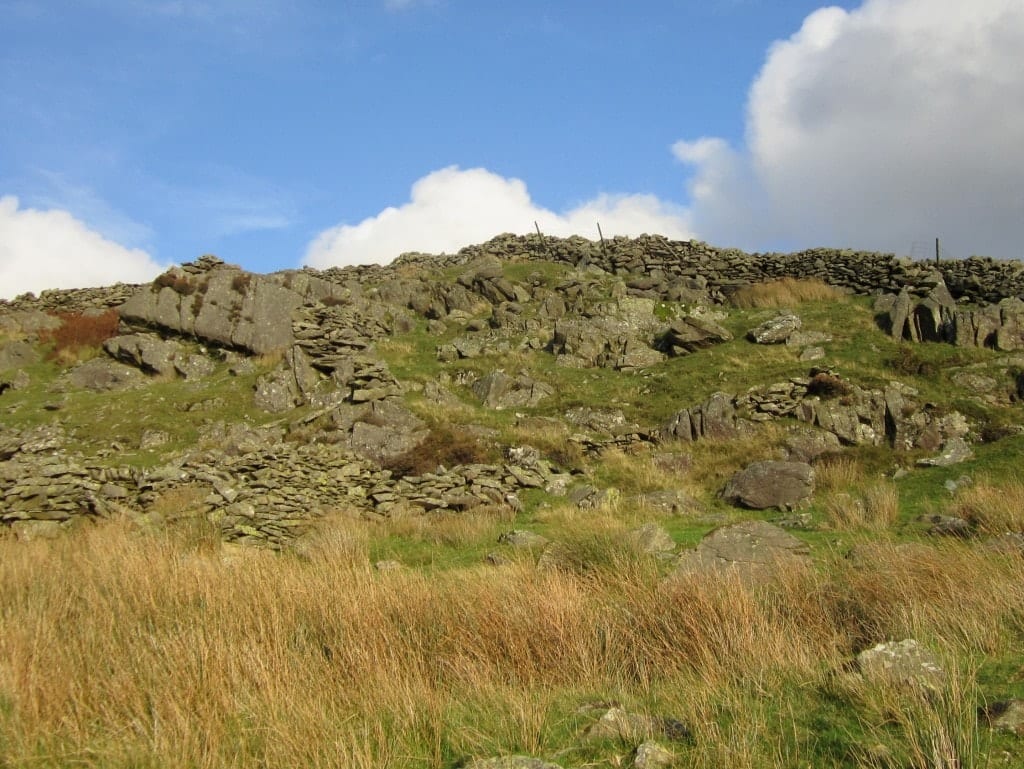 The hills were covered with centuries-old rock walls built to pen in the sheep.  Sheep are everywhere in Wales (so easy to make a joke, and I won’t), and they are all over the mountain, even at high altitudes. 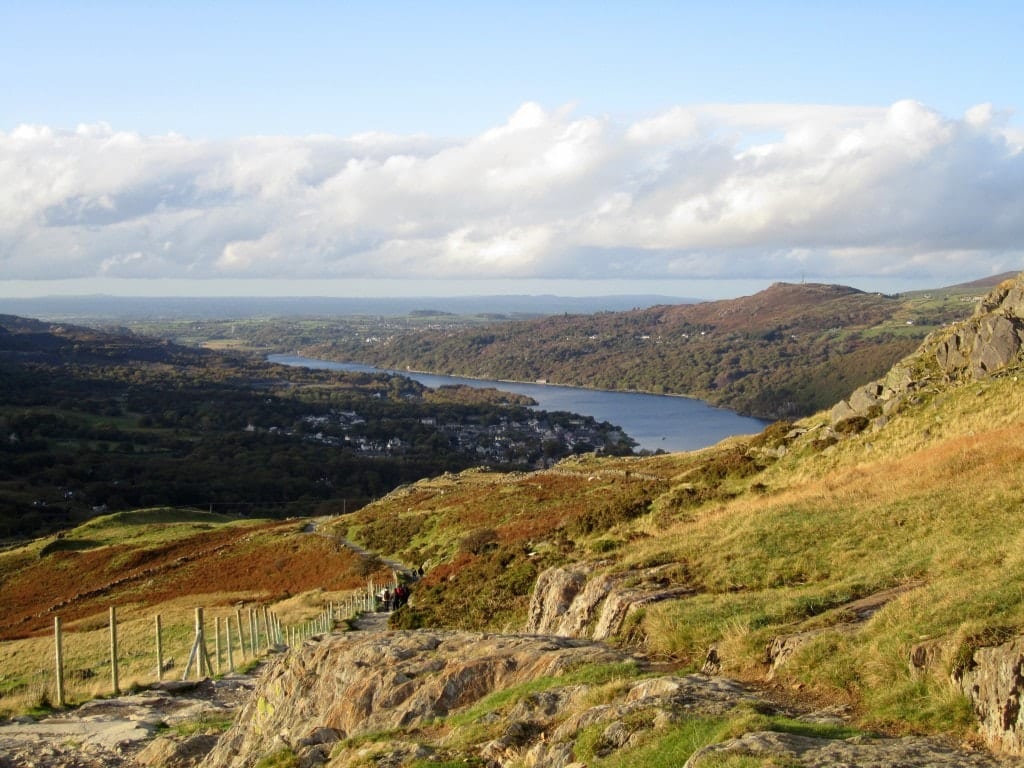 The best views, however, were on the way back.  We stepped out of the cloud and back into sunlight, and since it was the late afternoon, everything was illuminated brilliantly, including Llyn Padarn.

I also took a video of one of the cooler views: 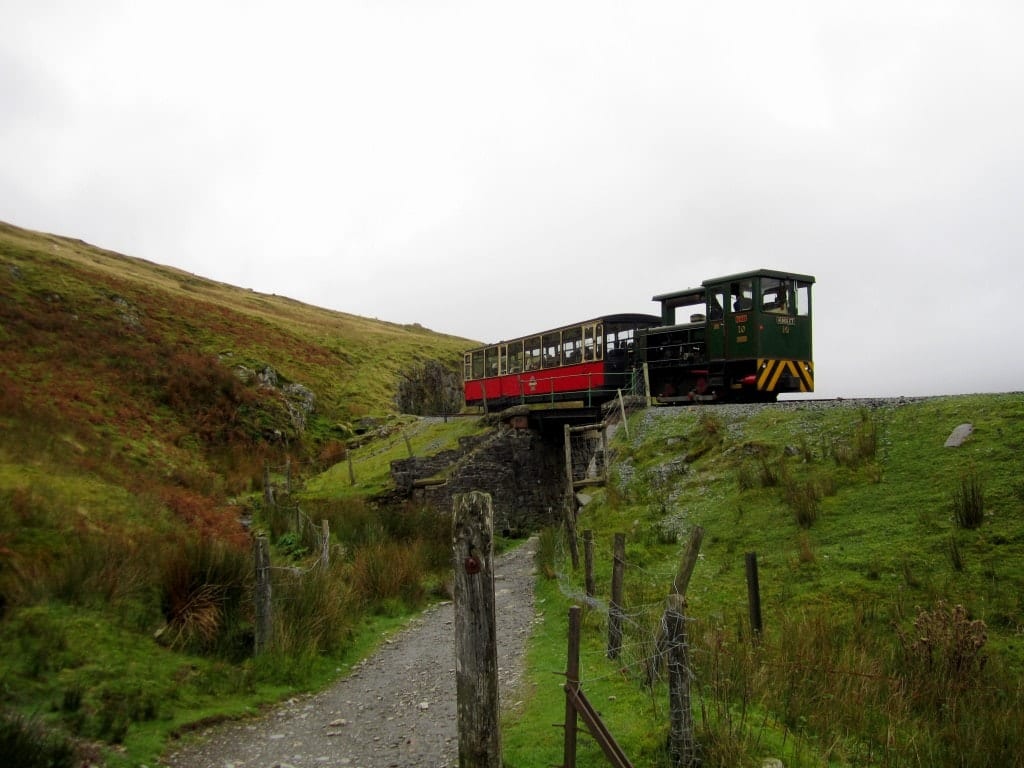 The Snowdon Mountain Railway has been in operation since 1896, and is an interesting piece of history.  An old-fashioned train takes you slowly up the mountain, near the Llanberis Path, taking in all of the glorious scenery.

Round trip fares are £25 for adults; one way fares are £18.  This is the only way to get to the top besides getting there on your own. 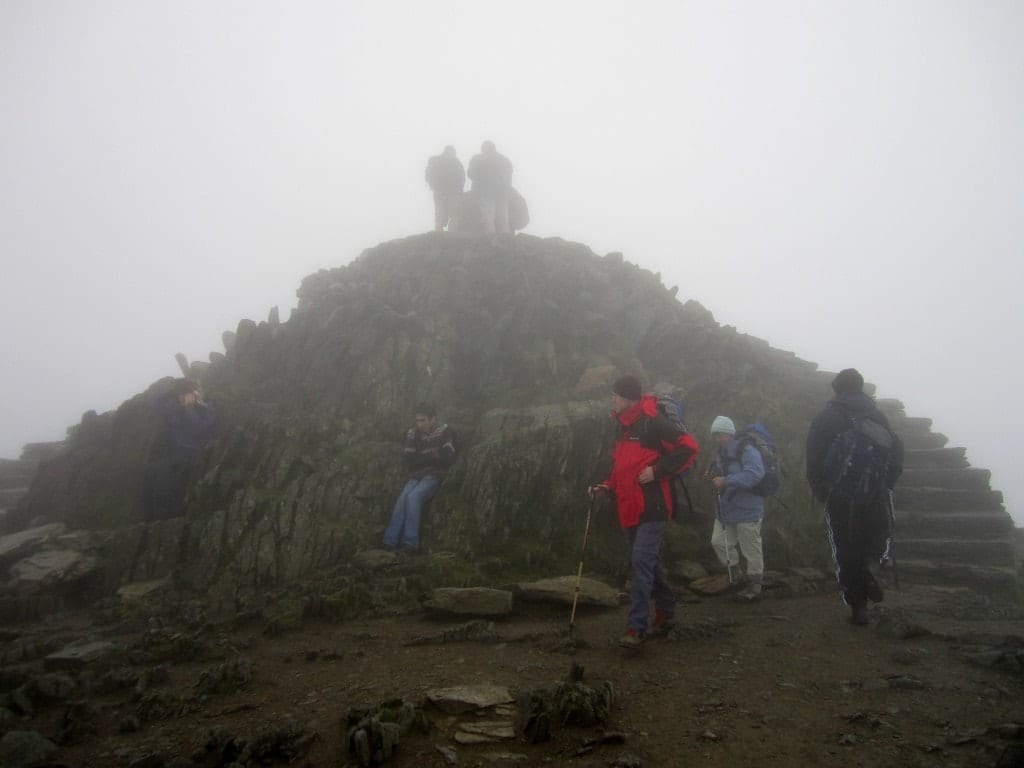 After two and a half hours, we reached the summit of Mount Snowdon!  Anyone who has ever climbed a mountain can attest that arriving at the summit is an amazing feeling. Especially when the last part of the climb is the most difficult. 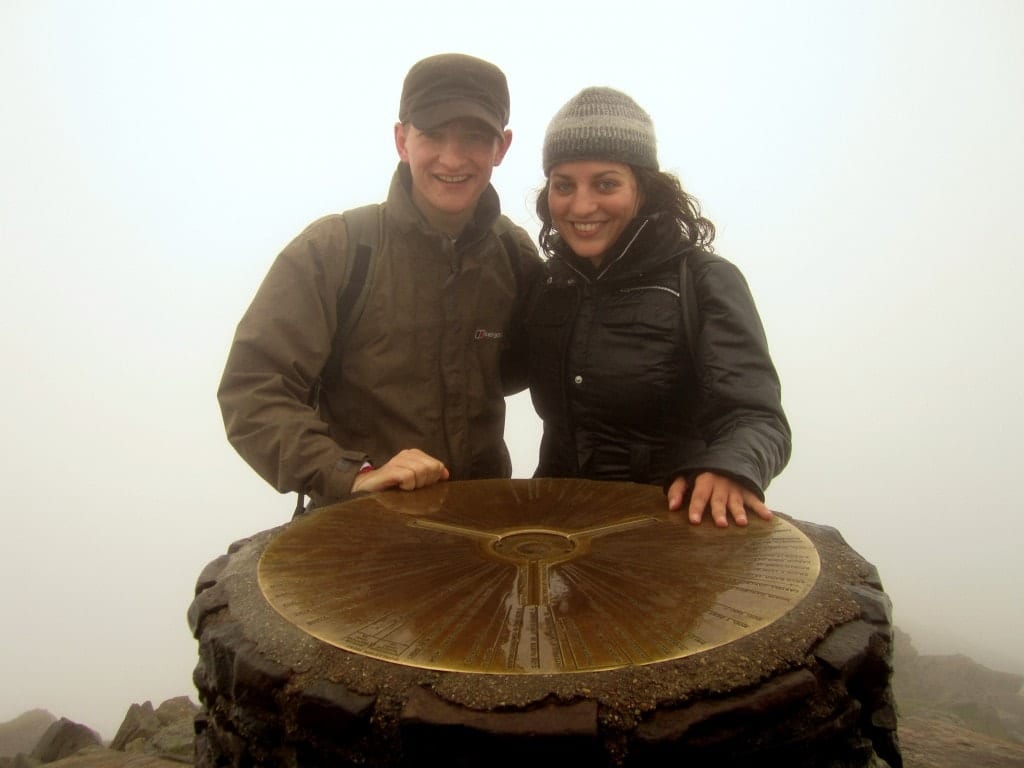 On top is a structure with a compass showing you what you can see in every direction.  Unfortunately for us, we had been in a cloud for the past 45 minutes and could barely see each other!  On clear days, you can see as far as Ireland, the Lake District, and even the Isle of Man.

Also at the top is the Summit Visitor Centre, where you can take a break from the outdoors and get some food.

Want to climb to the top, then take the train back?  GOOD LUCK.  Getting the train back without a round-trip is a standby-only process, and tickets are hard to come by.  Plan on climbing down. 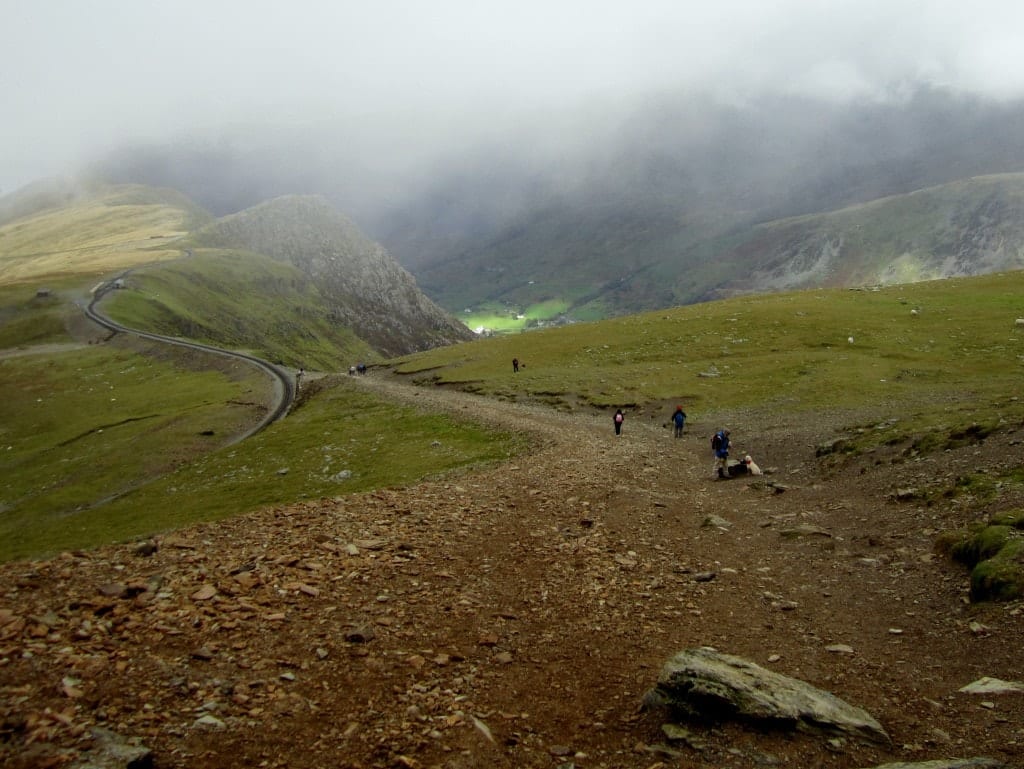 How much does it cost to climb Snowdon?  It’s free.  Blissfully free.

Snowdonia National Park has free admission, there are no climbing fees, and we were a bit lucky with parking — the meter was broken in the lot, so we didn’t have to pay.  (It usually costs £4.)

Want to do Snowdon on the cheap?  Pack a lunch — they have food at the base, summit and halfway point, but it’s a bit pricey.  If you’re visiting from afar, compare holiday prices to find cheap lodging nearby.  Holiday prices are always higher in summer, when the weather is at its best, but climbing in the fall isn’t bad, either! 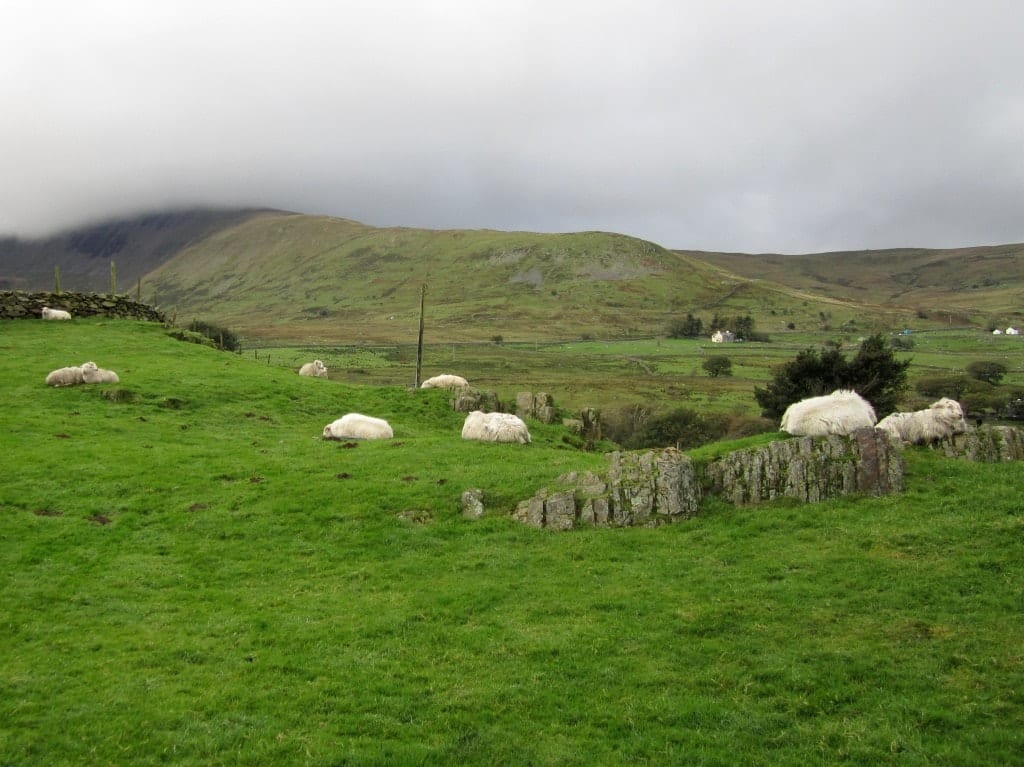 Climbing Snowdon is absolutely worth it.  This is one of Wales’s best adventures, and one that you’ll always remember.