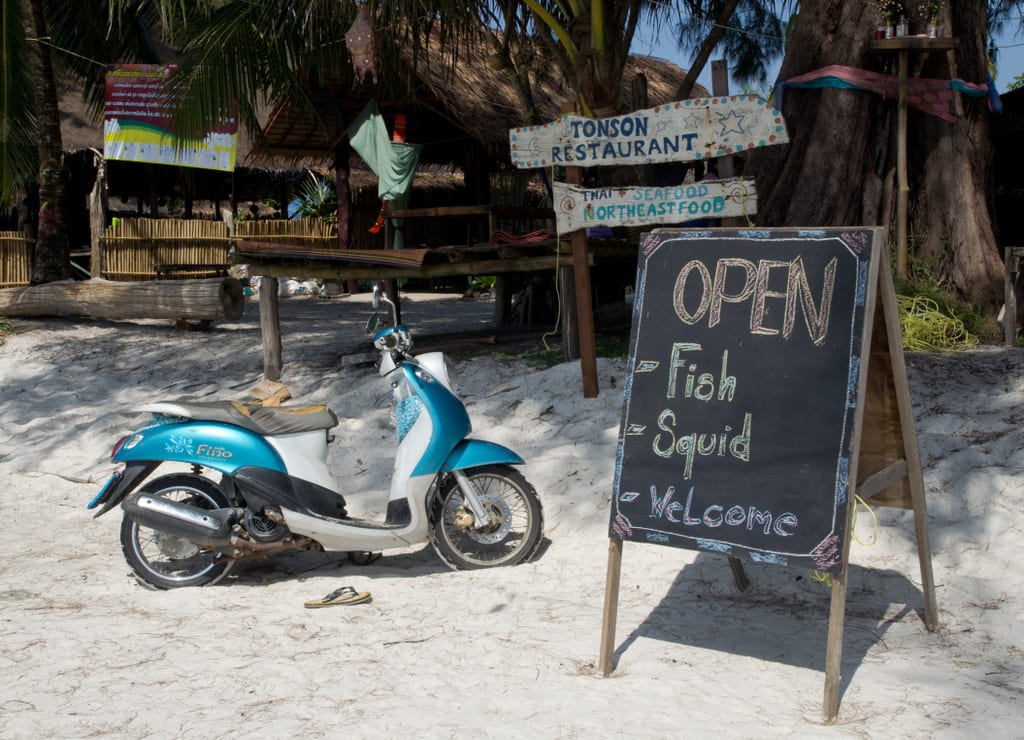 “I don’t think the bags will fit,” I tell the motorbike driver apologetically.

I had called our lodging ahead of time and asked about transporting my large wheeled backpack, affectionately nicknamed The Turtle. I had read that there were no cars on this island, only motorbikes, and I wanted to make sure that I would be able to transport my bag.

“It’s no problem at all,” the resort owner had told me over the phone. I took that to mean that there would be simple tuk-tuks or wagons for the motorbikes; instead, he meant that these drivers were simply more determined than others.

The motorbike driver has actually fit my enormous,  wheeled suitcase in front of him on the motorbike. There’s just barely enough room for me to hop on the back, my day pack extending behind the seat.

And we’re off! The paved roads are smooth — but after two minutes, they turn into dirt paths covered with twisted tree trunks, potholes, occasionally planks running over chasms. My driver weaves from side to side, almost at a 45-degree angle. I am freaking out and sweating profusely, begging a higher power to get us to the resort in peace.

Five minutes later, it’s all over. When I get off the motorbike at my ecolodge, my face is white and I can’t stop trembling.

Why had I come here?

My first trip to Thailand took me to Ao Nang, Koh Phi Phi, Koh Lanta, Railay, and Koh Chang – all quite popular and very much discovered islands and beach towns. It would be good for me, both for my own benefit and for my career’s benefit, to see a less-developed sign of Thailand.

On this trip, I wanted to visit some developing islands, the kinds that had infrastructure but were much less visited than the perennial favorites. After poring over descriptions of islands, I eventually settled on Koh Phayam, an island off the coast of Ranong Province near the Myanmar border.

Checking into our bungalow at PP Land Ecolodge made me sigh with happiness. The sound of the waves, warm breezes, sunshine, a hammock of my own – this was the southern Thailand that I had fallen in love with years ago, and I had missed it so much.

My bungalow was simple and lovely, one of few places on the island with 24-hour electricity. The promised wifi didn’t work whatsoever, but I had phone signal and could tether. 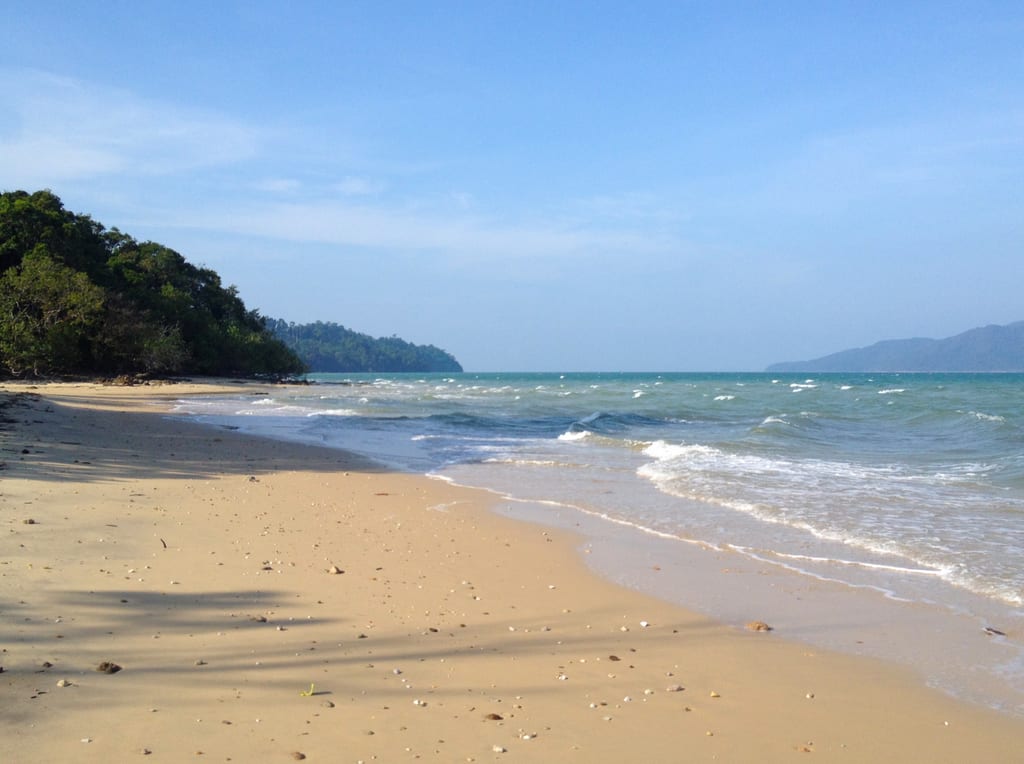 The resort’s beach, though, wasn’t what I expected. It was filled with debris – not garbage, but enough branches and broken shells to know that it wasn’t being cared for. In the empty beaches next to the resort, though, the beaches were covered with trash, which inevitably made its way into the ocean. The waves were calm but unusually foamy, as if there were soap in the water.

PP Land’s beach seemed good in theory, but once I saw it in person, I didn’t feel comfortable venturing into the water.

That said, there was far more to Phayam than the isolated corner where my resort stood, and I set off on a motorbike.

I began my exploration at Long Beach, the main beach of Koh Phayam. The maps I had seen made it look like the beach was covered with guesthouses, one after the other. The actual beach looked nothing like that. It was empty, the few guesthouses hidden in the forest just off shore, signs reading “Electricity 6-10 PM.” 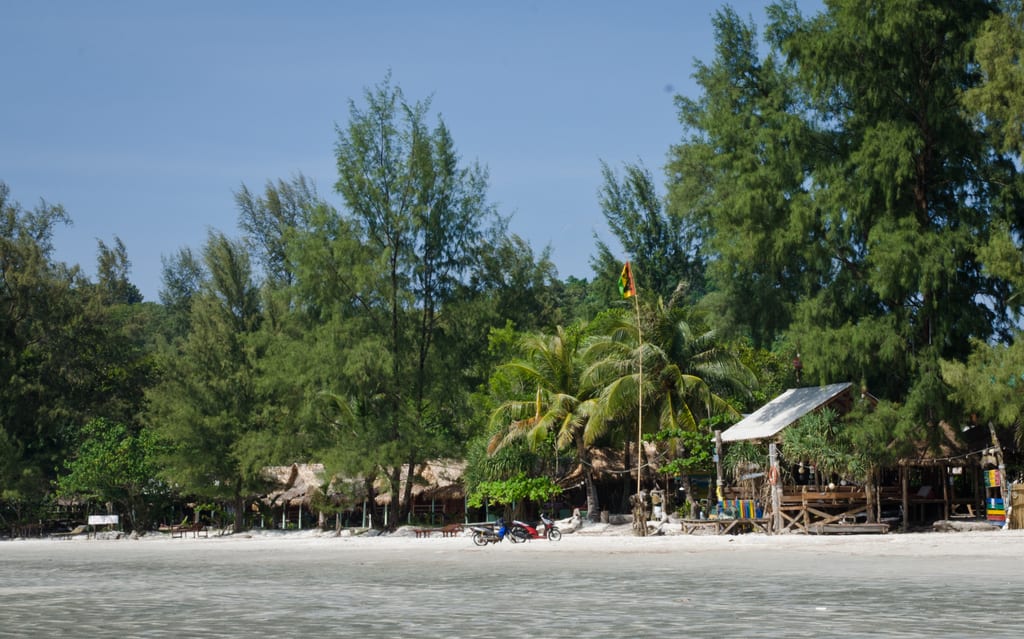 It was high season. Where were all the people?

And then we saw the jellyfish. 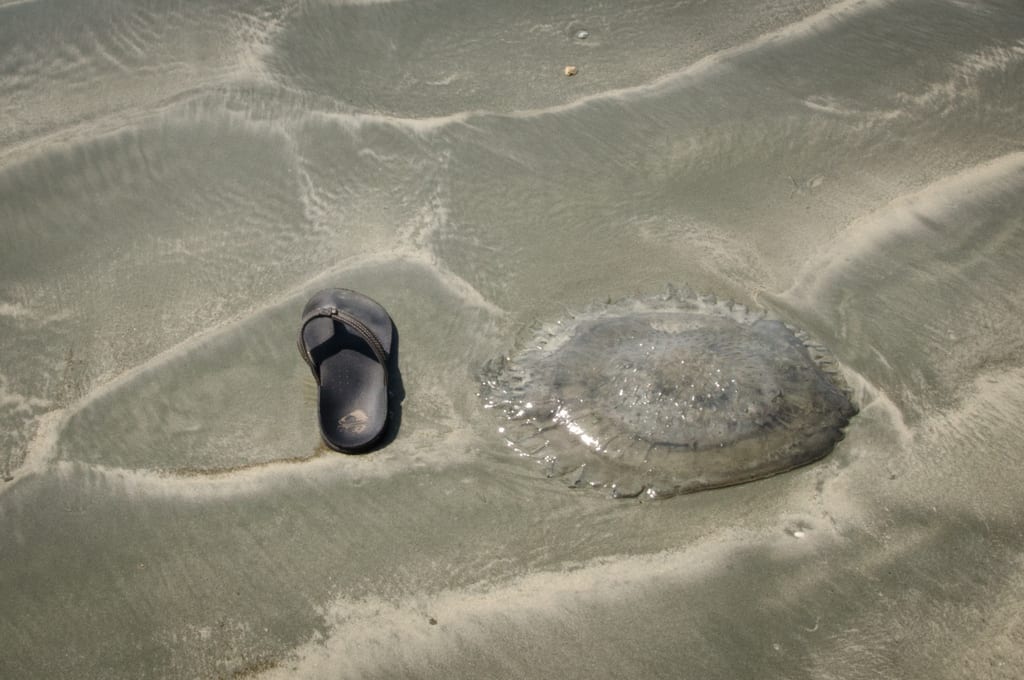 Three girls ventured into the surf. I shrank back. No way was I getting close!

Back inland, I went exploring on the motorbike.  While the roads surrounding PP Land were rough and challenging, most of the main roads on the island were decently paved.

There were a few bars near the beach and the ferry drop-off, but other than that, this was an island for locals, not visitors. Here I found a very friendly atmosphere, with virtually every islander stopping what he or she were doing to turn and wave to me.

Late in the day, I took a few random turns when searching for another beach, rode to the bottom of a steep hill, and came upon this peaceful spot. 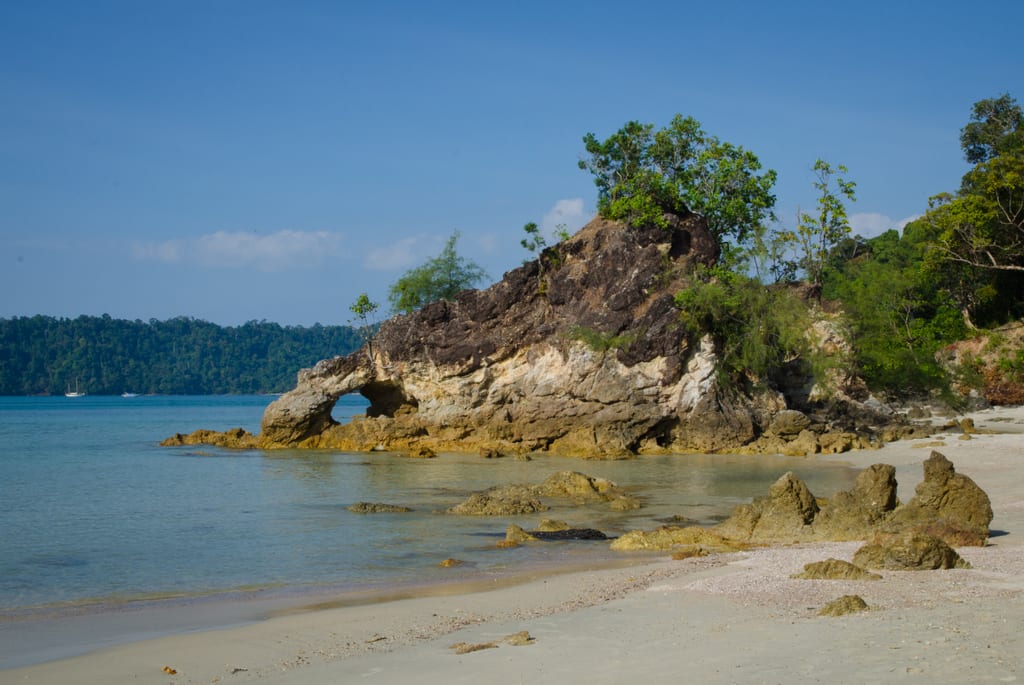 Clear cerulean waters. Only two other people. No buildings. No trash. No jellyfish.

I walked into the water and submerged myself. After two beaches that were unswimmable, finally slipping into the cool water here was a moment of perfection on Phayam.

Why had I REALLY come here?

Hindsight is a gift. Writing most of my posts chronologically and being so far behind in time has given me the chance to look back and analyze my travels.

It took me a long time to realize it, but then it hit me – I was doing what I thought I had to do. There is a lot of snobbery in travel, period, but especially so in regions like Southeast Asia that were once considered the domain of serious travelers only and are now popular with new and inexperienced travelers.

Resources – and this ranges from guidebooks and online travel guides to travel blogs, travel literature, and the sixth level of hell (also known as Lonely Planet’s Thorn Tree forum), whether they explicitly say so or strongly hint — perpetuate the idea that the quality of a Southeast Asia beach destination is inversely proportional to its number of visitors.

In other words, the more popular the beach destination, the worse it is; the more undiscovered the place, the better it is. 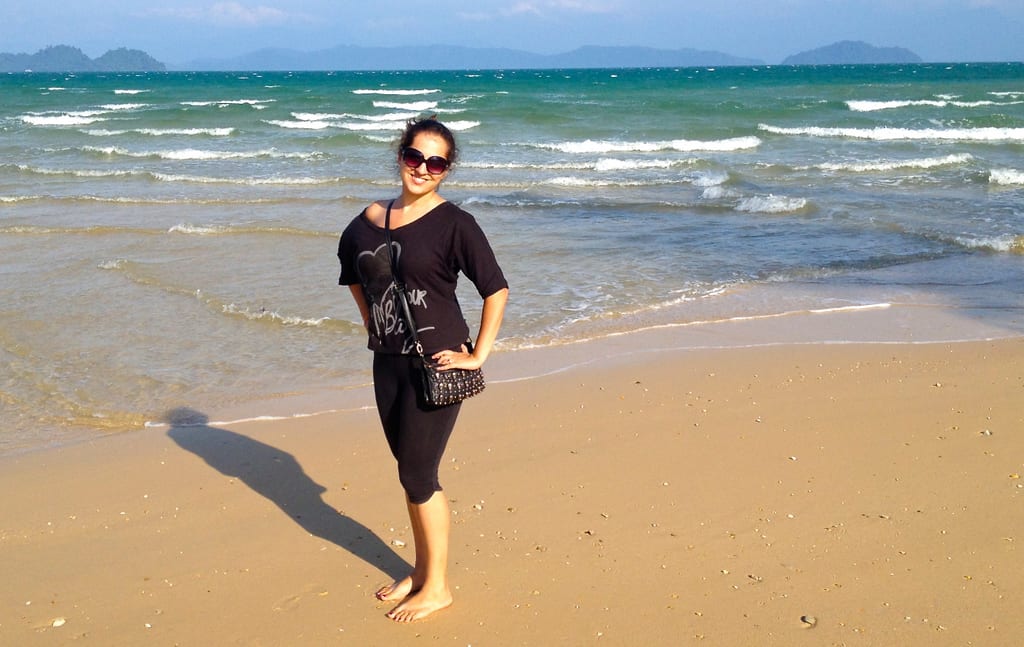 It’s not that simple. Most popular places are popular for a reason, whether it’s Venice or the Grand Canyon. Phranang Beach in Railay is clogged with beachgoers, especially in peak season, but the natural setting is second to none.

Some places, granted, have taken tourism too far. If you look at photos Koh Phi Phi now and 20 years ago, or if you just smell the constant stench of sewage in the air due to the overstressed plumbing, you’ll see that they developed the island too much. That said, Phi Phi is lots of people’s favorite place, and though it isn’t mine, I had a great time there a few years ago.

I ended up on Phayam because people described it with enthusiasm and nostalgia. This was how Thai islands used to be. This was an island that was holding on to its integrity instead of commercialism. Real travelers had to experience an island like this, or else they hadn’t experienced the real Thailand.

I actually let this get to me. I let the opinions of other people make me feel subconsciously bad about my travel choices.

The truth is that Koh Phayam is far too basic an island for me and one nice, out-of-the-way beach doesn’t make up for the fact that I’d never swim at the other beaches.

I don’t regret visiting Koh Phayam at all, because it taught me that I don’t really like this kind of destination. When I’m hanging out in a beach town, I want to be able to find a café or two where I can enjoy a latte and free wifi. I want to be able to get out of a ferry without having to scale a crumbling wall, Bear Grylls-style.

I completely understand why people like Koh Phayam and similarly basic islands. It can be nice to take a break from civilization, strumming your guitar or ukelele and getting to be part of a community of beach bums. As for me, I like electricity. I like wifi. I like being able to work all day and take breaks swimming in the ocean and relaxing on soft sand. I do enjoy visiting pristine, untouched islands – but I prefer to do that on a day trip.

Perhaps that’s why my favorite Southeast Asia beach destinations are Koh Lanta in Thailand and Boracay in the Philippines.

Koh Lanta isn’t nearly as popular as Phuket or Koh Samui, but nobody would call it undiscovered. It’s an island with well-developed tourism for all budgets, filled with tourists (many of them sunburned Swedes) and Western comforts. And I adore it there.

Boracay, on the other hand, is incredibly discovered and is teeming with hotels, shops and businesses. That said, the southern neighborhood of Angol is much quieter and has a great ambiance — but amenities are just steps away from the beach. I’m only two days into my time here, but I adore it here as well.

Both destinations charge fees for the cleaning of the islands, and it shows. The beaches on Lanta and Boracay are beautiful and incredibly clean.

That’s what I love in a beach destination. Nice beaches, connectivity, and decent amenities. And that doesn’t make my travels any less “authentic,” whatever that’s supposed to mean. A barely-discovered island is not the be-all and end-all of Southeast Asian travel. I’m glad that Phayam taught me that.

Do you think less-discovered islands are better? Share away!

82 thoughts on “On Islands, Snobbery, and Koh Phayam”