Today is my 26th birthday.

Every year, I like to look back and evaluate the past year — especially when it comes to travel.

At first, looking back over the past year, I was disappointed in myself — there was hardly any travel at age 25.  I went to Cancun last August, mainly due to low fares during swine flu hysteria, and I did a few weekend trips to New York City and Philadelphia, plus Troy, New York.  Not much.

No Vegas trips.  No big trips.  And I still haven’t made it to Martha’s Vineyard or Nantucket!  Not that good for someone whose Twitter profile describes herself as a travel guru, Vegas expert, adventurer and vagabondress.

But you know what?  Age 25 has been AMAZING.

This is the year that I decided to move toward my dream, even though I didn’t quite realize it at the time.  I began by travel writing and publishing some pieces, then moved toward starting this blog in February. I’ll talk more about the blog later in the week.

But nothing defines the past year like what happened this past January.

Within two weeks of each other, my long-term relationship ended, I lost my job, I lost a plum freelance writing gig, and Ted Kennedy’s Senate seat went to a Republican.

It didn’t matter that I had always been ambivalent about the relationship, or that I already had a new job lined up when I lost the first.  It was tough to be hit with those four things in rapid succession — boom, boom, boom, boom!

Now, if this happened to you, would you take it as a sign?

I’m incredibly grateful for my life and for the wonderful people who are part of it.  At the same time, I know that this isn’t the life that I want for myself.  My dreams have been taking a backseat lately and I almost feel like I’m killing time.

After all, do I plan on staying in Boston, meeting someone, getting married, buying a house in the suburbs, having kids?  Um, no.  Nothing wrong with people who do that, but it’s not for me.  I want adventures.  I want the world.

So I started taking steps toward creating the life I want.

1. I paid off my credit card debt.

2. I began saving more money than ever before.

3. I built a web site and now spend all my free time improving and promoting it.

Age 25, despite the lack of travel, was actually pretty productive.  It’s been great being so focused on working toward making my dreams come true.

Age 26 is going to be my most adventurous year yet.  And I’m not being facetious…I truly mean it!  I am currently planning like mad, saving money like crazy, and getting ready to move out of my apartment and in with friends and family.

This year is going to be AMAZING.  I can’t wait to share the details with all of you!  As I turn 27, I’ll be writing about how I just had the best year of my life. 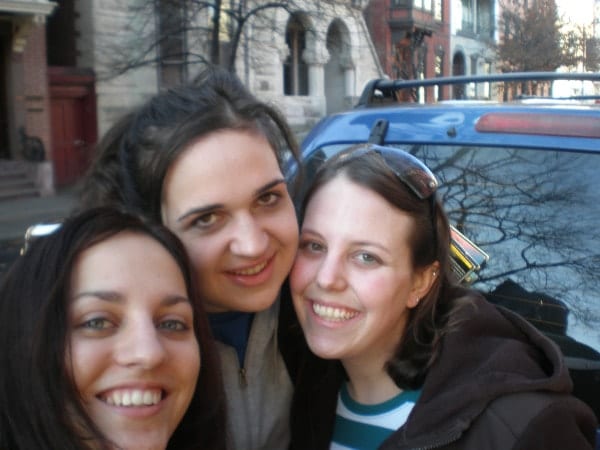 My favorite picture from the past year: best friends since middle school, and closer than ever.

27 thoughts on “Reflections On Turning 26”