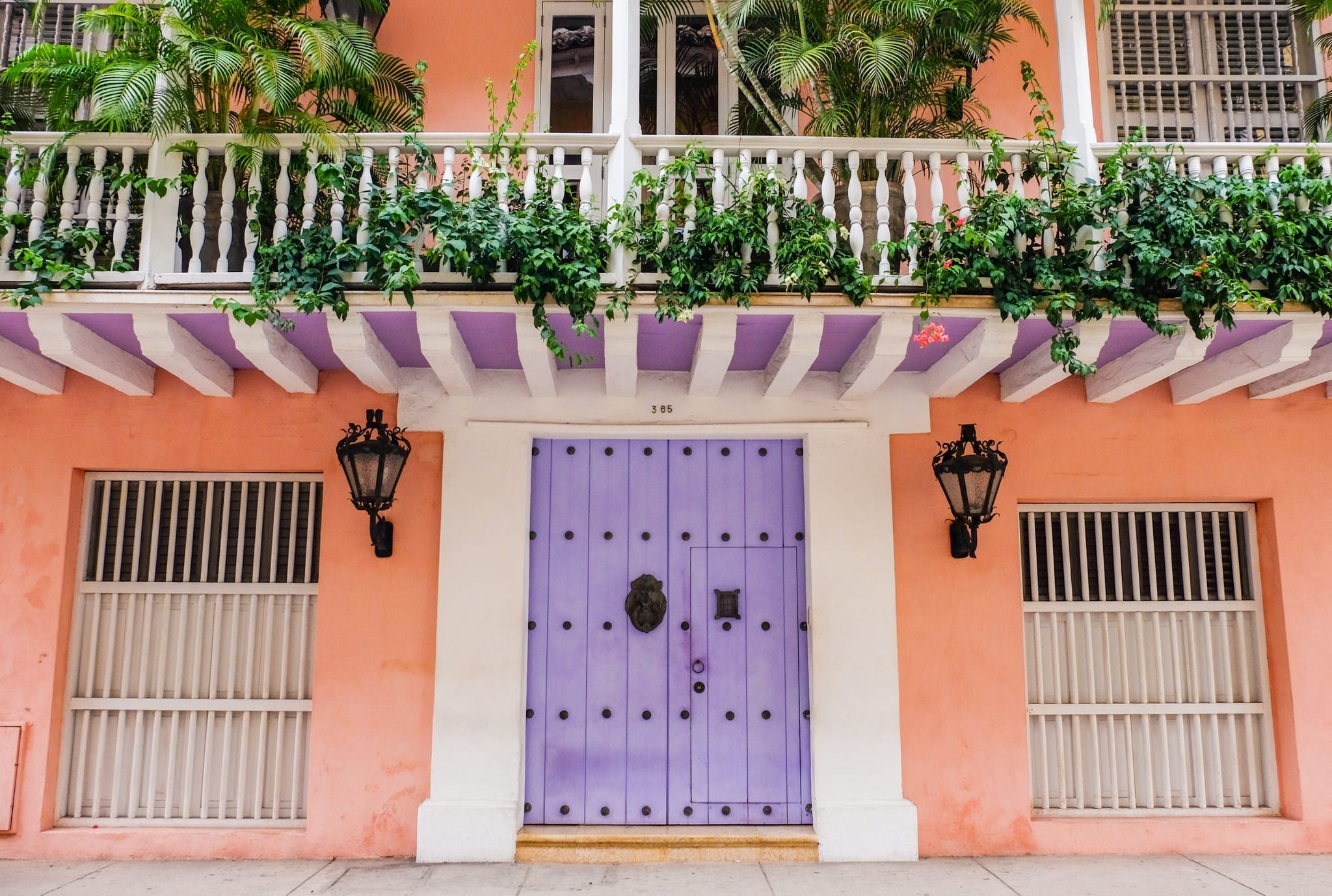 My guard is up as I land in Cartagena. Not only is this my first time in Colombia, it’s my first time in South America since 2008. And that trip was just to Buenos Aires, which one could argue is Europe’s most southwesternmost point.

This trip is different, even for a seasoned solo female traveler like me. I don’t know how safe it’s going to be on the ground, and I need to be more cautious than usual.

With no ATM at the airport, I have my driver stop at a bank on the way to my guesthouse. I take my valuables-stuffed day bag into the vestibule with me and keep an eye on the taxi — he wouldn’t drive away with my big bag, would he?

Of course not. He waits for me and I return to the vehicle flush with cash.

He drops me off at my guesthouse; I check in (cheering on the inside that I did it entirely in Spanish!); I place my tech gear, jewelry, and passport in my portable safe and lock it around the base of the toilet; I procure a SIM card (again in Spanish!).

Later in the streets of Getsemaní, Cartagena’s onetime red light district, I yearn to photograph everything in sight but keep my camera in my bag. I don’t know how safe it is to have my camera out here. I’m sure I can do it — but not just yet.

Over time, I relax a bit. I get comfortable photographing Getsemani — but only during the day. I take Ubers home from the Old City after dark instead of walking. Everything remotely valuable is locked up in the portable safe.

Maybe it’s a little excessively cautious. But I end up leaving Colombia without a single mishap. 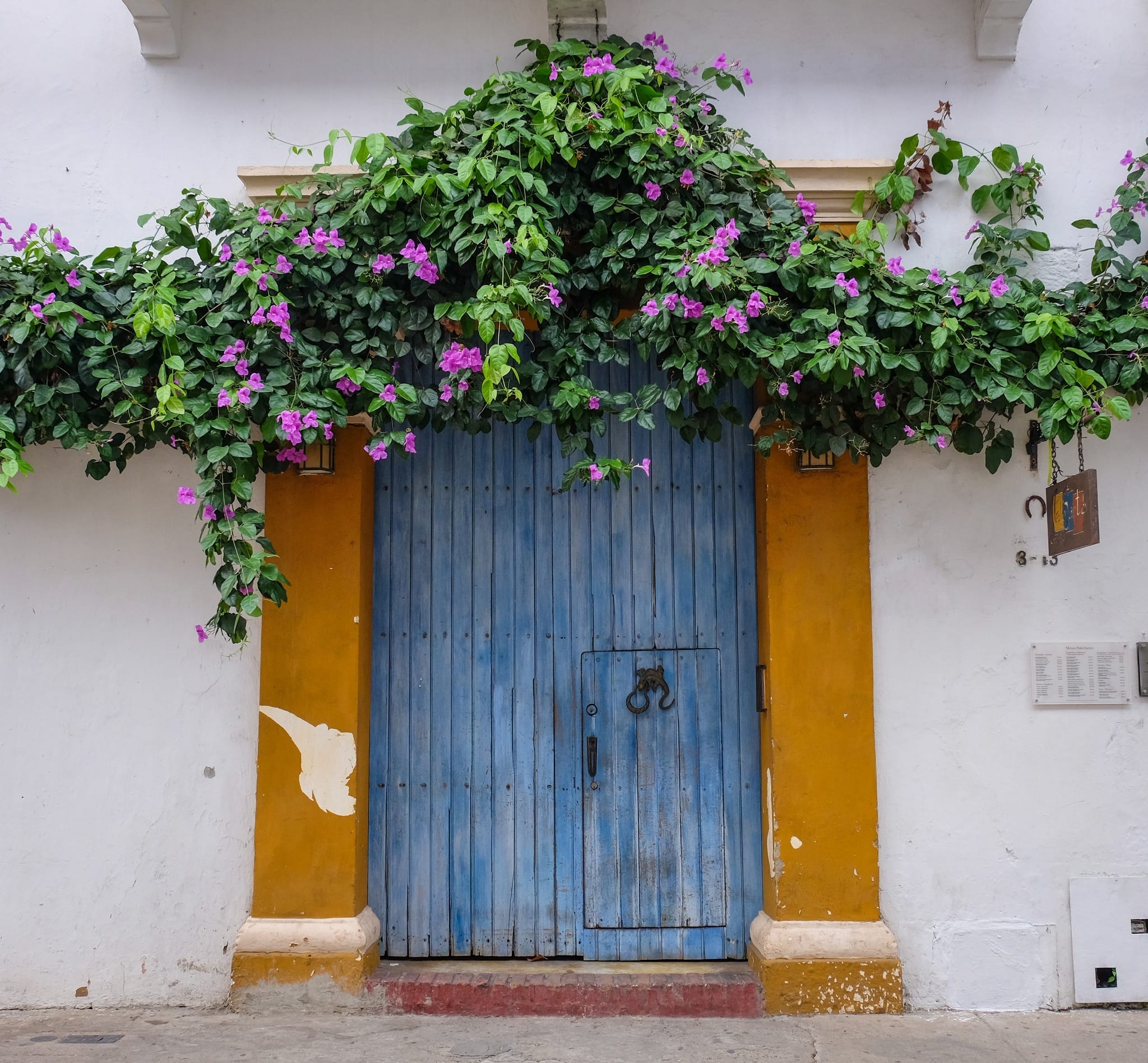 I throw on skinny jeans, a tank top, and flip-flops before heading out.

It doesn’t sound like much of an outfit, but this was deliberately planned. I dress to blend in wherever I go. Latin American women tend to keep their legs covered during the day, so that’s what I do, too. Jeans are the rule, even if temperatures soar above 100 degrees.

I’m not trying to pass as Colombian. I’m trying to pass as a girl who knows Colombia well, perhaps a longtime expat or frequent visitor. At the very least, covering my legs provides me with significantly less street harassment. I learned that in Nicaragua.

I soon arrive in the Old City, gaping at the vibrant colors and giant doors. This place is lovely but touristy as hell. And nearly every foreign female tourist I pass has her legs bared. Rompers, a clothing item to which I’ve never warmed, are particularly popular.

Soon it becomes clear that jeans aren’t the most comfortable thing to wear. It’s HUMID. Grotesquely so. Growing up in Massachusetts, I’m used to hardcore humidity in the summer, the kind that you can almost carve with your fingers — but Cartagena is several times worse than anything I’ve ever felt.

Within minutes my jeans feel like ten layers of thermal underwear. I eventually throw myself into an air-conditioned cafe to recover, a pattern that will repeat with frequency over the next few days.

I look at the weather forecast and it will be thunderstorming on and off for the next week. August is a good time to visit Bogota and Medellin, but not so much for the Caribbean Coast.

I check out the report for Santa Marta, a few hours up the coast. Same deal.

For the first time, I’m regretting my choice to go with Colombia instead of Peru. Winter would have been so much better for the coast.

I do a little flight research and the decision is made: I’m leaving Cartagena after three nights, skipping the rest of the Caribbean coast, and heading straight to Medellín. It’s in the mountains with a spring-like climate year-round. And it is. Medellín is pure sunshine.

Later, well-traveled friends tell me that Cartagena is the most humid place they’ve ever been, too. 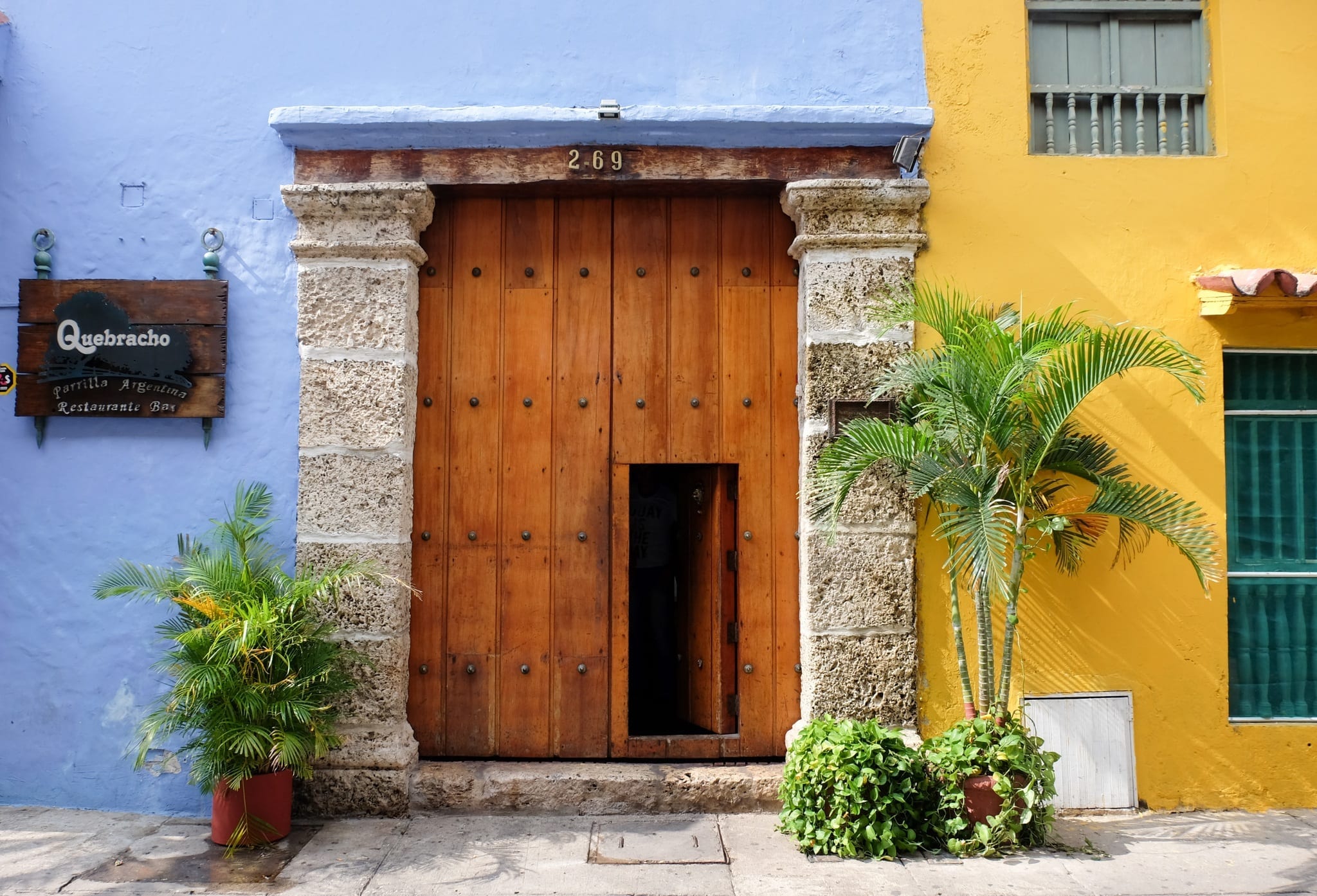 I stop by a nice-looking bakery and check out the case at the front, filled with beautiful, painstakingly constructed pastries.

I’m about to grab a table when a blonde girl stops me and says, “Kate?”

I quickly suck in my stomach and pull my resting frown into a gracious grin, raising my eyebrows in friendly expectation before turning to face her. “Yes?”

“I emailed you,” she tells me.

“I told you I was going to be in Cartagena.”

She first commented on my blog when I announced my Colombia plans — our paths might cross! We lined up our dates and realized we would be in Cartagena at the same time and planned to meet up if we could. But we didn’t expect to run into each other like this!

She’s traveling with her friend and they invite me to join them. It’s her friend’s first international trip ever. I’m glad she’s having fun, but at the same time, I already know Colombia is not a place I’d recommend for most first-timers.

Soon I feel my heart swelling with nostalgia. They’re young. They’re backpackers. They’re at the beginning of their travel life.

I put a younger Kate in their shoes. What would my days be like here?

Hostel dorms. Partying. Boys from around the world. Drinking games. Not having to work. New friendships, intense and strong and intimate, only to disintegrate into Facebook comments as soon as your paths inevitably divulge.

The hope that maybe what you’re doing here will change the rest of your life. And it’s the truth.

I want them to enjoy every minute of it. 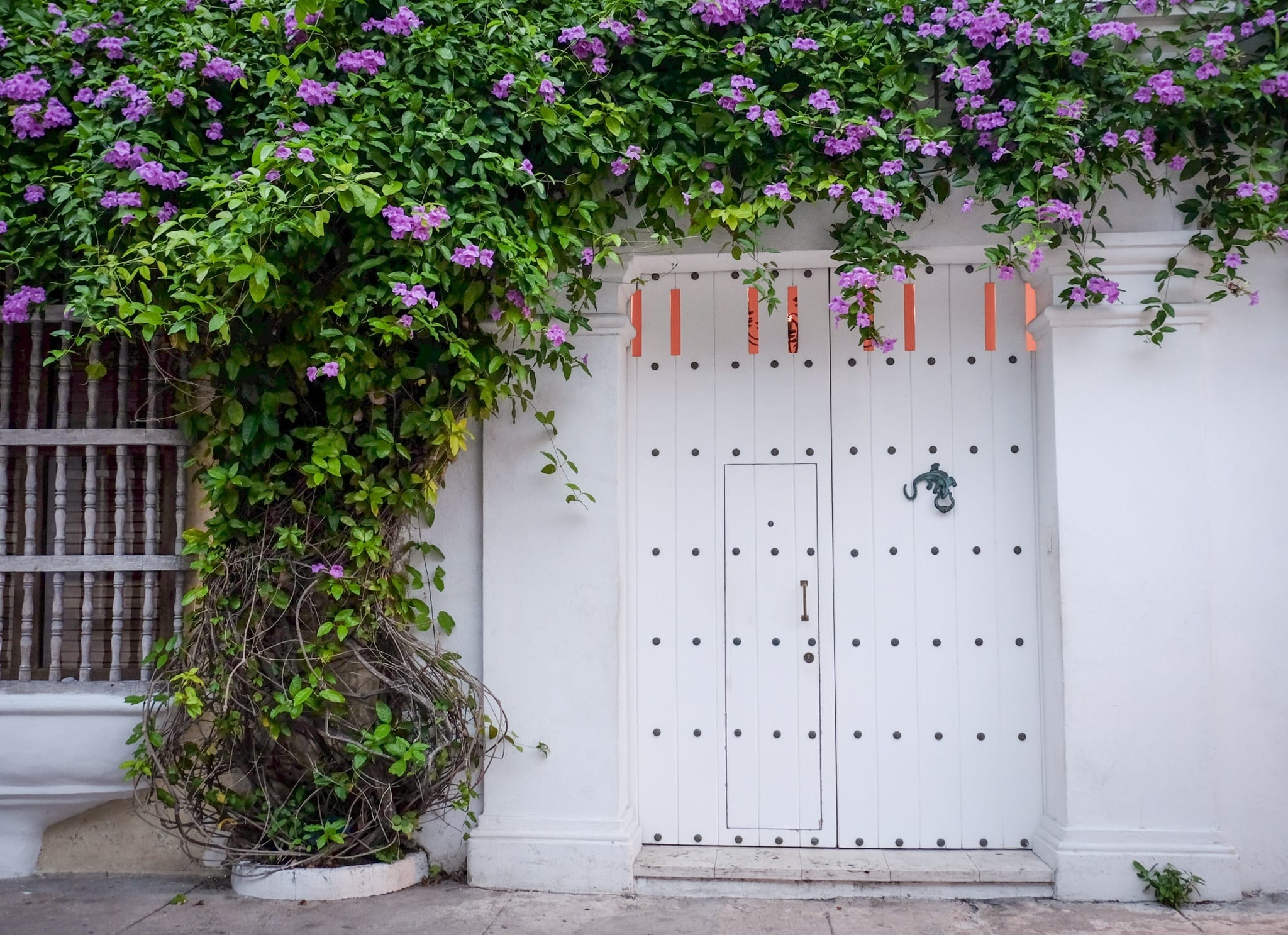 Every Day Of My Life

I’m walking along the city walls when I come to a cafe. Two men start gesturing with a menu, several more sitting behind them. “Agua, limonada, cerveza!”

“No, gracias,” I reply and walk on. I’d rather stop at a nice coffeeshop later.

“Where you from?” one man asks. I shrug and keep walking. “You alone?” I ignore him.

“I bet you don’t cost a lot,” the man sneers in impeccable English as I walk away.

I don’t react, but my cheeks turn magenta. Soon I’m back in a crowded area and free to seethe, clenching my wrists as my heart thuds.

I hate this. I hate that it happens all the fucking time and there’s nothing I can do about it, lest I risk my well-being and the expensive camera in my hand. The right thing to do is to avoid escalation and move to a safe place.

But as always, I furiously plan out a long-delayed comeback.

“Is your mother still alive?”

“I’m asking you — is your mother still alive?”

“Did she raise you to talk to women that way?”

“Then I’m glad she didn’t live to see you talk to women that way.” 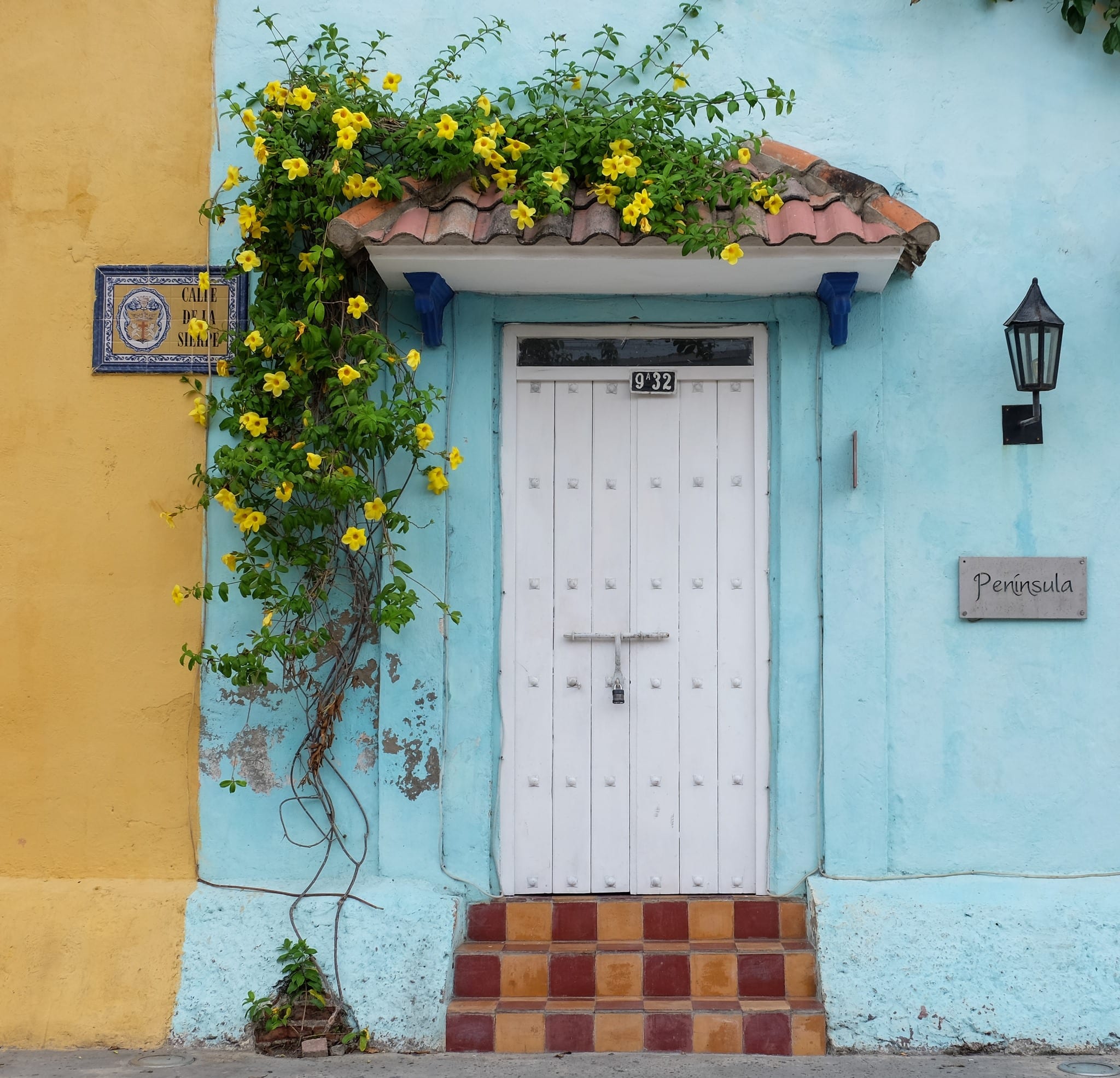 Is This a Date?

There’s an episode of Doug, the Nickelodeon cartoon, when Doug asks his crush Patti Mayonnaise to go to the movies with him and can’t figure out whether it’s a date or not.

She buys her own ticket — it’s not a date.

And poor Doug can’t figure it out. But he does get to hold her hand at the end.

I’m in a similar situation after meeting New York Guy on my food tour. After the tour is finished, we linger over coffees, chatting and laughing, and he asks me if I want to get dinner and check out a salsa club that night.

Also, he’s actually traveling Colombia with his friends, but he wants to hang out with me that night instead. THAT’S what makes it sound like a date to me.

But Kate — do YOU want this to be a date?

I don’t, actually. I just want to hang out with someone cool. As friends. And it’s nice getting to experience the nightlife, because I never do that solo.

But do you want HIM to think it’s a date?

Well, I don’t want him to be hurt, but…yeah. I do. For ego reasons. Let’s not kid ourselves.

So you’re saying if he made a move, you wouldn’t reciprocate.

I meet him at a restaurant that night. He’s dressed up. So am I. It’s a date!

But considering how humid Cartagena is, showering and changing is more of a bare minimum hygiene requirement than anything else. It’s not a date!

We talk about our families. Our careers. Our travels. Our New York lives. We lightly banter over choosing a bottle of red. This is first date conversation. It’s a date!

I’ve never had this experience before — going out with someone in a foreign country who actually lives in the same city as you. Most dates while traveling come with an expiration date. Not here. He tells me where he lives and I calculate I could get there, door to door, in 35 minutes.

If this were a date and it lasted, it would be a hell of a story.

But it’s not a date. We chat as friends. We split the bill as friends. We go to the club and enjoy the salsa as friends. We drink a lot of mojitos as friends. And he walks me home, says goodnight, and doesn’t make a move — because we have decided, without explicitly saying so, to be friends.

And I’m glad it worked out this way. But at the same time…was he dead set on not making a move? Or did I do something to ruin my chances?

34 thoughts on “Solo Travel in Cartagena in Five Vignettes”