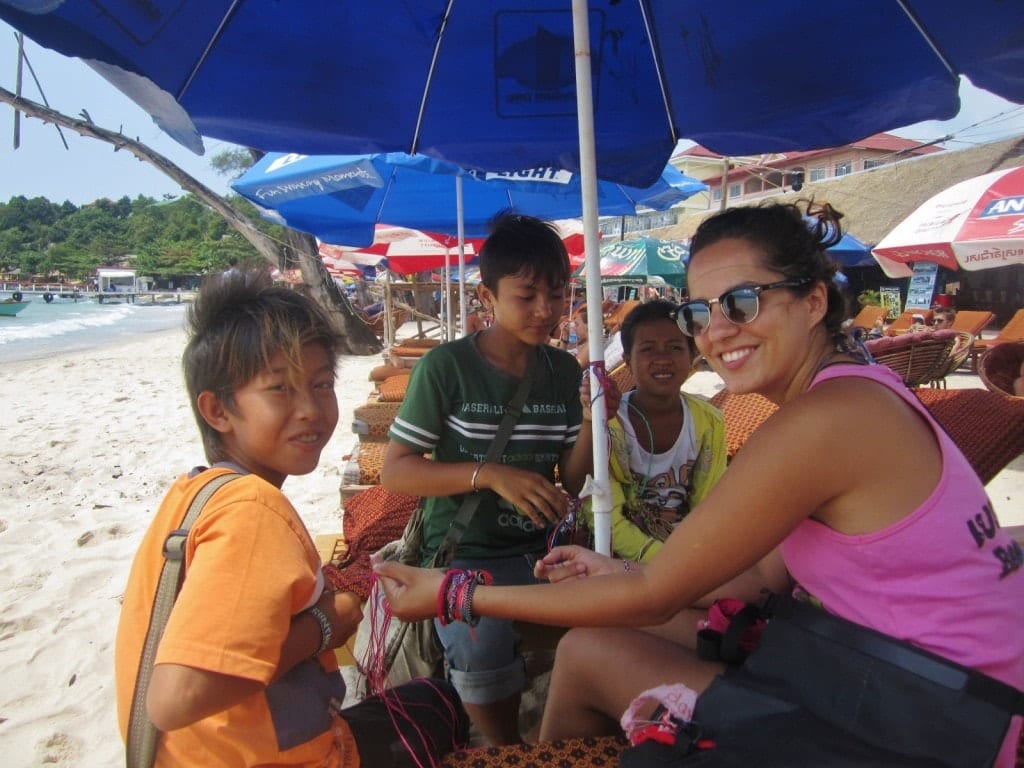 They are the cutest kids you’ve ever seen, they can swear their heads off in multiple languages, and they can get you to buy anything.

They’re one of the symbols of Sihanoukville, Cambodia – the child vendors selling bracelets on Serendipity Beach.

You will grow to love these kids, who spend their days selling overpriced bracelets to gullible tourists like me.

“One-fifty for a bracelet?” I protest to a ten-year-old girl.  “That’s the cost of three beers!”

“Well, if you drink beer, you’ll get drunk.  If you get a bracelet you’ll love it foreeeeeever!” she says with a smile.

“No money, no honey!” she sings.  “Open your heart, open your wallet!”  With that smile, how could I tell her no?

I bid her down to two dollars for two.  Massively overpriced?  Yes.  But look at my wrist in the photo above — that’s the wrist of a girl who can’t say no to adorable kids!

Well, don’t let their cuteness fool you — these kids swear like sailors.

Check out the video, in which they sing Pitbull’s “I Know You Want Me” and flip us off in half a dozen different ways:

It’s easy to just sit back and laugh. But I started wondering about these kids’ lives.

After having dinner on the beach, two men, both amputees, approach us.  Like the rest of the disabled men who beg along the beach, each of them has a small child in tow.

For many reasons, I do not to give to beggars — I support local organizations and charities instead.  However, I make an exception for the disabled in Cambodia, since there are so many of them and there are virtually no social services to help them make a living.

The little boy bows to us, a silent request for money.  He’s probably much older than he looks, and he’s wearing the tiniest pair of leopard-print shorts I’ve ever seen.

That little boy is four years old and already working.

I hand the man 1,000 riel – 25 cents – and start dancing with the little boy, whose face lights up like a Christmas tree. 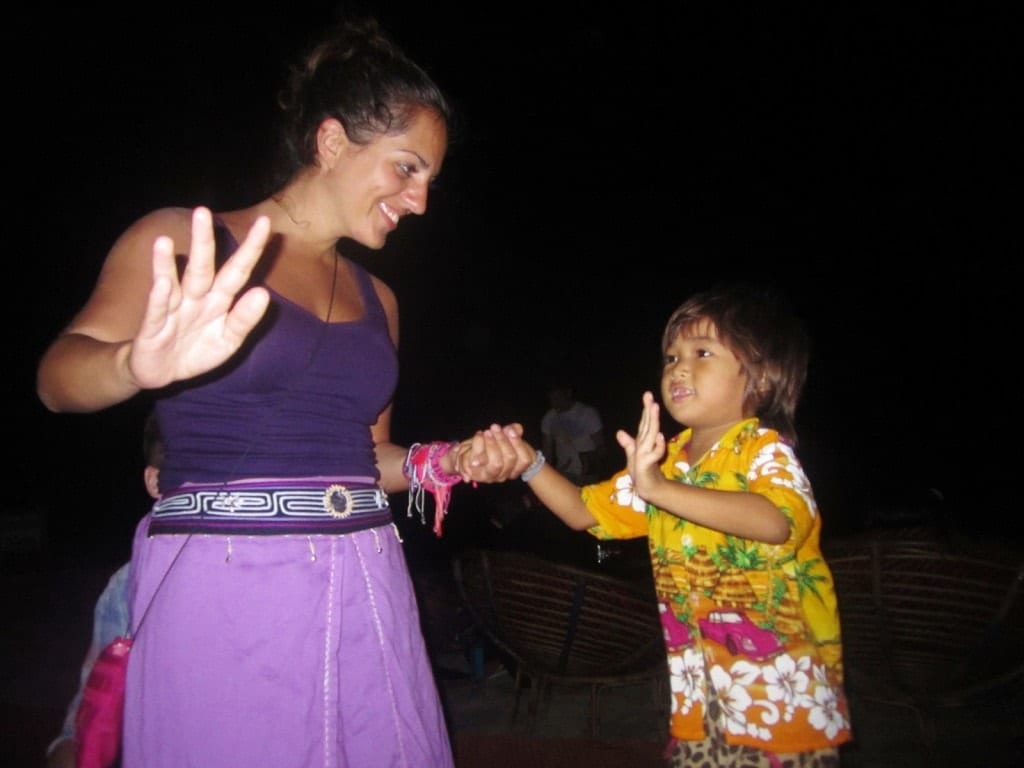 He’s squealing with delight and copying my every move. I’m cha-cha-ing, picking him up, swinging him around.

Ste, meanwhile, is playing with the other child, a little girl, and chasing her all over the place.  They stop to pose for a picture, and I’ve never seen this much joy on a child’s face before.

It nearly makes me burst into tears.  These kids never get attention like this.

What happens to them?

The youngest kids lead the disabled – walking around with amputees or leading blind singers with a cane, bowing to tourists and asking for money.

A few years later, the kids start selling bracelets.  Each of them learns every style of weaving and every sales technique to win over the tourists.

When the kids become teenagers, they often sell freshly chopped fruit salads. Then, once the girls grow up, they offer pedicures and massages.  They could sell squid on a stick and tiny lobsters, but not a lot of Western tourists buy either, and that’s where the money is — Westerners.

The men?  Most often, tuk-tuk drivers.

There are exceptions.  Many of the kids grow up to work in a guesthouse or restaurant, or even open a place of their own.  But many of them never leave the beach.

I want to take all these kids into my arms and hold them.  Beneath their mischievous smiles, beyond the blatant profanity, they’re just kids who want to be kids.

19 thoughts on “The Adorable, Trash-Talking Kid Vendors of Sihanoukville”