If there’s anything that brings tourists in droves to beautiful Salzburg, Austria, it’s seeing the city where The Sound of Music is filmed.

Lots of sights from the movie are in the city — like the Mirabell Gardens, where the song “Do, Re, Mi” takes place — but for most of the sights, you need to join the tour with Panorama Tours.

I was happy to join this tour and made sure to wear my favorite twirling dress, imagining myself whirling around on top of a mountain like Julie Andrews!

The tour began with seeing the von Trapp family’s house from the film.  Not a bad view, don’t you think?

Fun fact: The scene where the kids and Maria fell in the water had to be shot twice.  It was freezing cold and the kids were miserable, but the second take was good enough for the movie!

We saw the street where Maria ran up, singing, “I Have Confidence”…

And, of course, I had to pose at the gazebo!

Fun fact: the director loved the face of the actress who played Liesl so much, he cast her without knowing if she could sing or dance.  Luckily she could!

While in the movie (and in real life) Maria and the Captain were married at the Abbey where she was a nun, they filmed the wedding in a church in nearby Mondsee.  They did this because the Abbey was tiny and they wanted to get a dramatic camera shot.

Fun fact: you can get tiny Jagermeister bottles filled with holy water in exchange for a small donation.  Now THAT’S a gift for your Sound of Music-loving friends!

This wasn’t even a part of the movie, but it was my favorite part of the tour.  We stopped at Wolfgang Zee, an inconceivably gorgeous lake.

I could have stared at that lake for hours.

To see more lakes like this, visit the Salzkammergut region outside Salzburg.  I had hoped to see the town of Halstatt and more lakes, but the weather wasn’t very good, and after this view, I knew anything less than pristine weather wouldn’t measure up.

The Real Sound of Music

I love that The Sound of Music, one of the most romantic films ever, is based on a true story!  Maria came to the Trapp family when one of the children, also named Maria, was stricken with scarlet fever.

What I found most interesting is that Maria was raised to be a socialist and atheist.  Why would an atheist choose to become a nun?  For the music.  Becoming a nun was a way to live a life filled with music.

A few differences from the film: Maria and the Captain married in 1927, but didn’t escape the Nazis until 1938, after they had had two children together.  When they escaped, they didn’t climb over the mountains to Switzerland — they took a train to Italy, then traveled to France, England, and then America, where they toured as singers.

The family eventually settled in Stowe, Vermont, where Maria and the Captain’s youngest child, Johannes, runs the Trapp Family Lodge.  (Side note: my aunt lives in Stowe and knows Johannes.  Also, the landscape is beautifully mountainous — while not the Alps, it’s not a bad substitute!)

If you grew up on The Sound of Music, you need to go on this tour.  It really moved me — far more than I expected it to.

The Sound of Music tour lasts about four hours and involves quite a bit of driving, including one hourlong haul.  During the drive, our guide played the music and led us in singalongs (though I do have to say that people didn’t join in much beyond “Do, Re, Mi” and “Sixteen Going on Seventeen”!)

The tour consisted of mostly Americans.  There isn’t a German version of The Sound of Music, so Germans and Austrians have no idea what the big deal is!

We had a very enthusiastic guide and driver who were both passionate about the region — and gave us a lesson in yodeling as well.  So many useful skills learned on this trip! 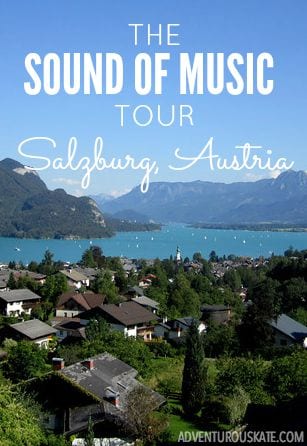 I loved this tour — it was definitely worth it.

I received a complimentary Sound of Music Tour from Panorama Tours and Tourism Austria.  All opinions, as always, are my own.

27 thoughts on “The Sound of Music Tour of Salzburg, Austria”