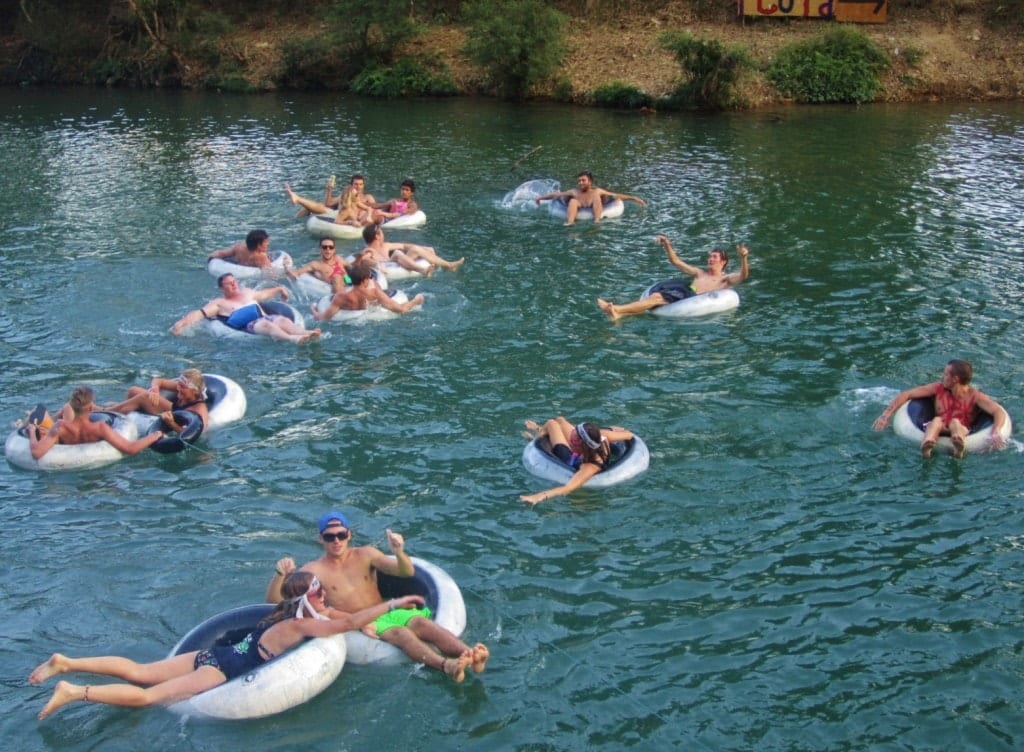 The dangers of tubing in Vang Vieng, Laos, are well-documented.  Most guidebooks say that a few people die every year. While in Vang Vieng, I heard an ominous (though unconfirmed) rumor that four people had died within the past two months.

Most of the time, people die in Vang Vieng because they drink too much or do drugs and then do crazy moves on the rope swings, hitting their heads on the rocks or drowning in the current.

It’s sad, and it’s awful.  Why should people be dying for such stupid reasons? 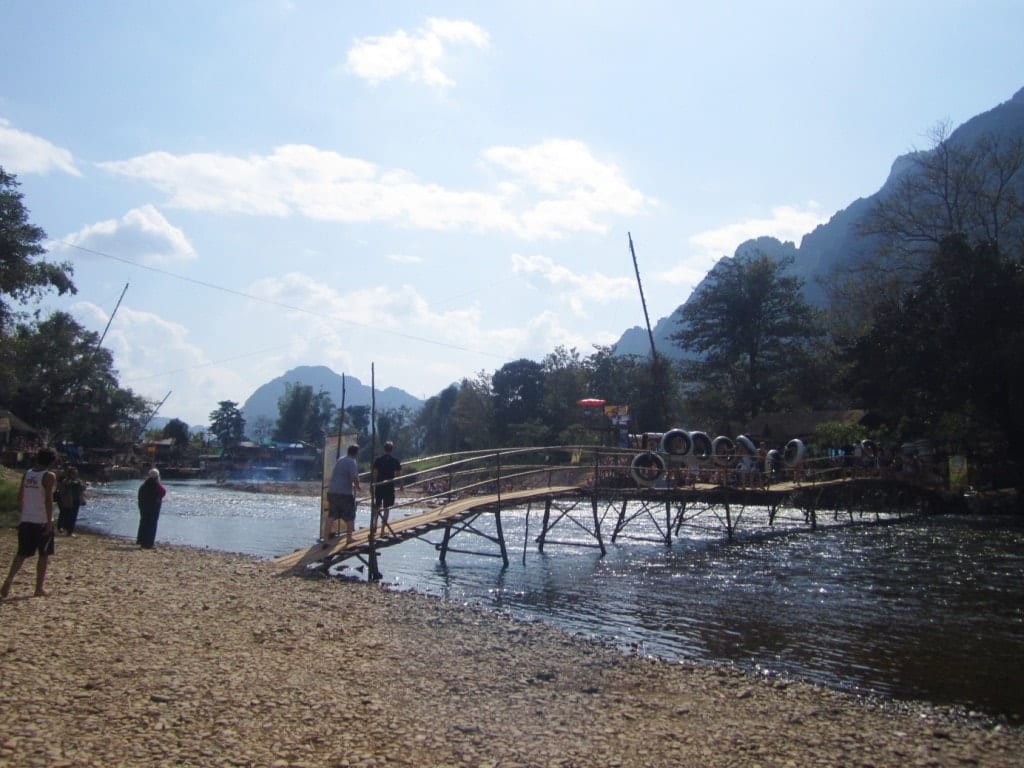 I witnessed one near-death during my time in Vang Vieng.

It was around noon and I was at Q Bar, the first bar on the river.  I was sitting with two Australian girls and we were watching people on the rope swing.  A guy went off the swing and landed in the water with a giant splash.

During the dry season in Vang Vieng, there is a little island in the middle of the river in front of Q Bar.  After landing in the water, the guy walked up to this embankment and stood there for a few moments.

Then the guy turned back and walked into the river until he was completely underwater.  He was submerged and floating vertically.

Then the bubbles started coming up.

At first, we thought he was doing it intentionally.  But after 15 seconds or so, the girls and I became concerned.

“Should someone do something?”

Just as soon as we said that, a guy dove off the edge of the bar into the river and pulled him to the surface. His face was still underwater.  A second guy swam out and pulled his head back so he could breathe.

They brought the guy to dry land – and he appeared to be fine, thank God.  He seemed alert and was talking right away.

This could have ended worse.  Far worse.

As far as I could see, this guy didn’t appear to be intoxicated. He could have been, but he didn’t seem to be, and it was very early in the day.  The only unusual factor about his jump was that he landed on his face.

The point?  Even if you avoid alcohol and drugs, Vang Vieng can be a dangerous place. 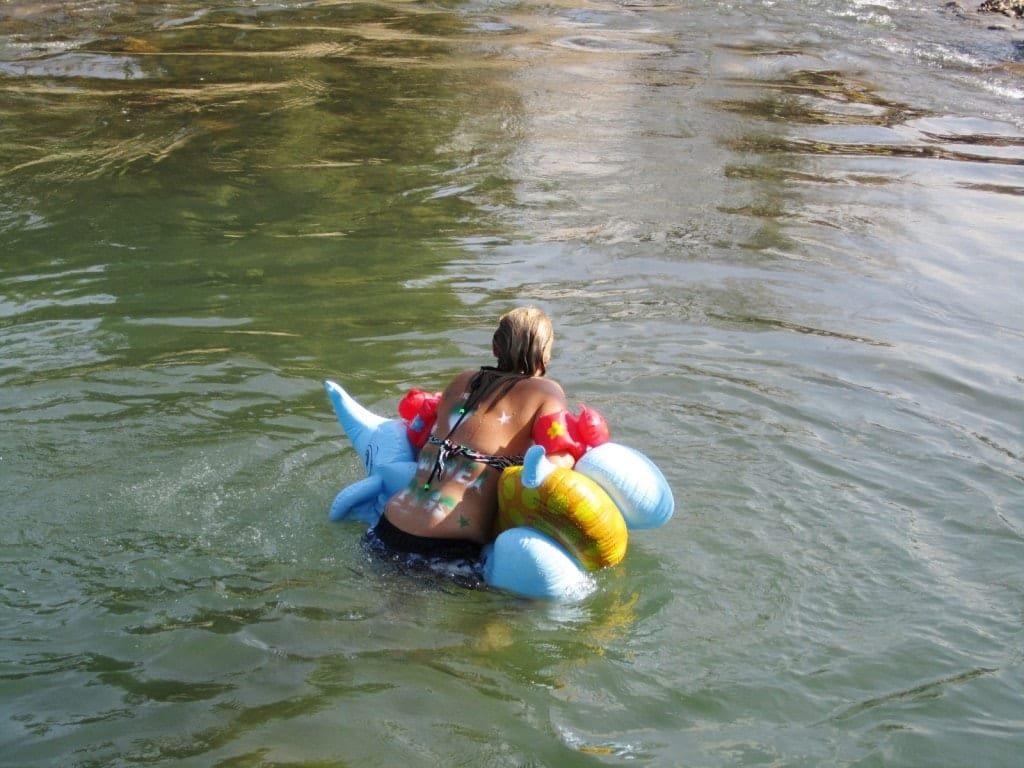 How to Stay Safe in Vang Vieng

Above all, don’t be stupid.  While freak accidents happen, 99% of the time the injuries in Vang Vieng are related to bad decision-making.

1. Watch your alcohol intake. While binge drinking is never a good idea, no matter the location, it’s worse in an area without any safety guidelines or medical facilities.  Watch your drinking — and drugs are a really bad idea, for many reasons.

2. Be particularly careful on the rope swings, slides and zip-lines. Watch other people go on them for awhile before you do and make sure you know how to handle them properly.  Make sure to land somewhere that’s free of rocks.

3. Don’t swim in the river without a tube. This is dangerous for both scraping yourself on the rocks and getting caught up in the current and potentially drowning.

4. Don’t go in the river after dark — even with a tube. Nobody will be around to help you if you need it.

5. Watch out for others. Even if you’re doing everything right, someone drunk could fall into you and knock you off the edge of the bar, or land on you after you land in the water. 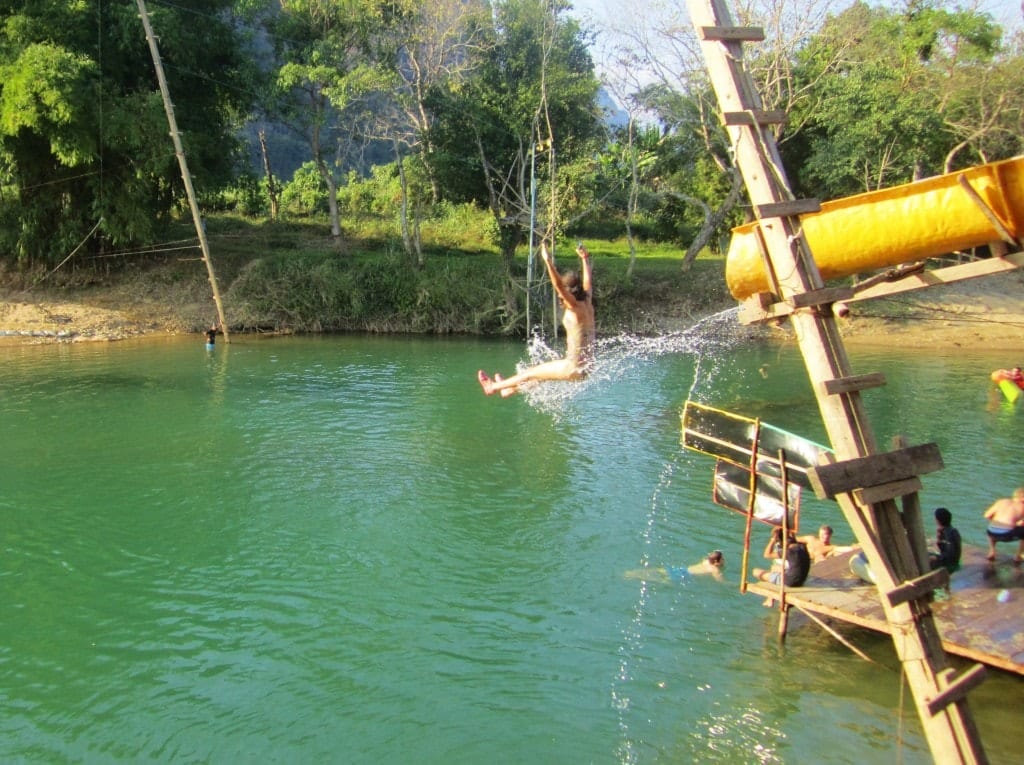 I refused to go on any rope swings or slides while in Vang Vieng.

Yes, I was often met with a “But you’re not being adventurous!” from my friends (and believe me, that happens quite often and is annoying every single time), but I didn’t care.

The rope swings were bungees, not actual ropes.  If you didn’t have great upper-body strength, you’d be thrown off.

On the zipline, if you didn’t let go before reaching the end, you’d be flipped backwards hard and fast.

Even the slides weren’t safe – people would go down them without looking, and I witnessed a lot of collisions.

After seeing that kid nearly die, I knew that I had made the right decision.  I wasn’t going to become one of Vang Vieng’s sad statistics.

And that goes for you, too.