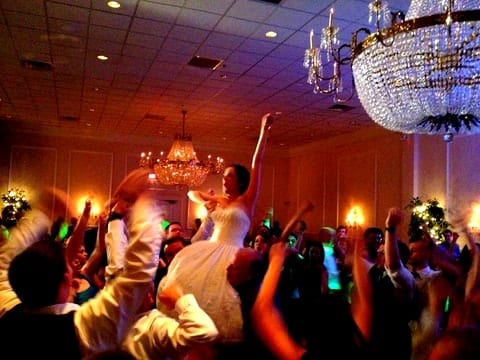 Readers, I have a challenge for you.  I dare you to find me one person who saw Wedding Crashers and said to themselves, “You know what?  That looks kind of lame.”

Good luck — because everyone I know who saw that movie walked out of the theater bright-eyed and excited, saying, “I SO have to do that!”

After traveling from Umbria, Italy, via taxi, train, two flights, a car ride from a friend I made on the plane, subway, Greyhound bus, and local bus, I had made it to my destination — a Doubletree hotel in the suburbs of Philadelphia — for the wedding of my dear friend and college roommate Kelly Anne.

It was a crazy weekend at the hotel, and as I made my way to the breakfast table with my college buds, I dodged a group of raucous groomsmen in purple ties, already swigging from a bottle of Jagermeister.

“There’s another wedding here,” I told my friends.  “I bet there’ll be a big party here later.”

“There are actually six weddings here tonight,” Shannon told me.

SIX WEDDINGS IN ONE HOTEL!  Turns out that even though April isn’t peak wedding season, this is common practice throughout the year.  (Take my advice — book a hotel room ASAP.)

The ceremony arrived, and Kelly was so beautiful — some girls are born to be a bride. 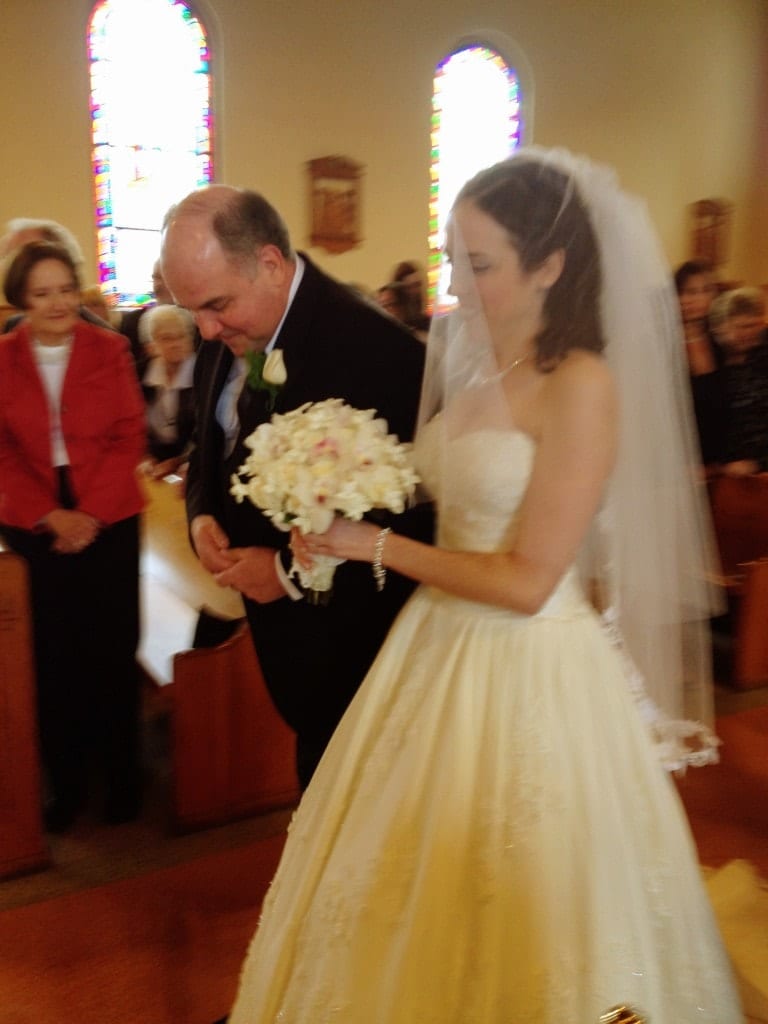 But things really cranked up once we got on the hotel shuttle to the reception venue and realized that half the people on board were actually on their way to one of the other weddings.  Our venue was host to two wedding receptions that evening.

“KEVIN!” I whispered loudly to my friend next to me.  “WE HAVE TO CRASH!  THESE ARE IDEAL CRASHING CONDITIONS!”

Kevin readily agreed, and we calculated our moves carefully.  The other bride and groom were there by the time we arrived, so they were likely ahead of us in time — we would have to move soon, but not too soon.  We decided to make our move after the dinner ended at Kelly and Dave’s wedding.

Giggling nonstop, we walked down the hall to the other ballroom.

“We’re dressed up.  We don’t need to do anything.  We can just merge our way onto the dance floor.”

And with a deep breath, I pushed open the door.

Right away, I saw we had our work cut out for us — this wedding was less than half the size of Kelly’s (granted, hers was HUGE), and there weren’t a lot of people out dancing.

THAT SAID — “Livin’ on a Prayer” was playing, and few songs make it easier to merge your way onto the dance floor.

After easing our way in oh-so-discreetly, we were tapped on the shoulder by the groom, resplendent in a white vest and tie.  “Heeeeeeeeeeeeeey…” he said, a smile creeping across his face.

He laughed at my enthusiasm.  “Have fun tonight,” he said as he shook Kevin’s hand.

And of course, we had to document the evidence: 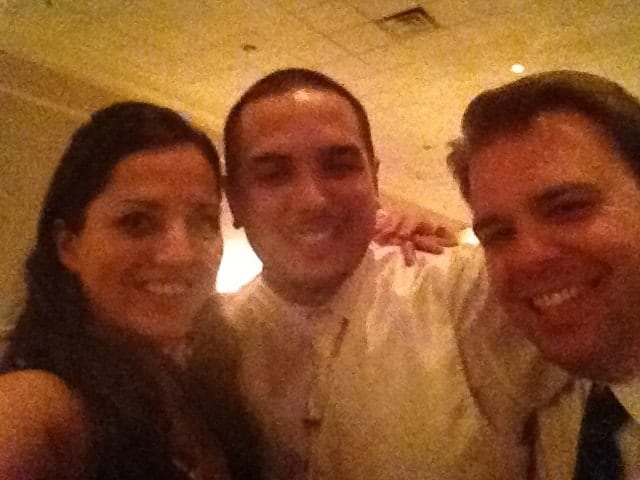 Foiled within ten seconds of crashing the wedding — but only the groom knew that.

We could hit up the other guests, like the lively groomsmen dancing in front of us.

“Ohhhhhh, we’re halfway there, OHHHHHHHH!  LIVIN’ ON A PRAYER!”  Singing out with our hands in the air, we made a natural addition to their circle.

“Hey ginge, I love your hair!” I yelled out to one of the guys.

His friends started laughing.  “You really like his hair?”

“Of course I do!  You’re Prince Harry!”  From then on, we were IN with the groomsmen. 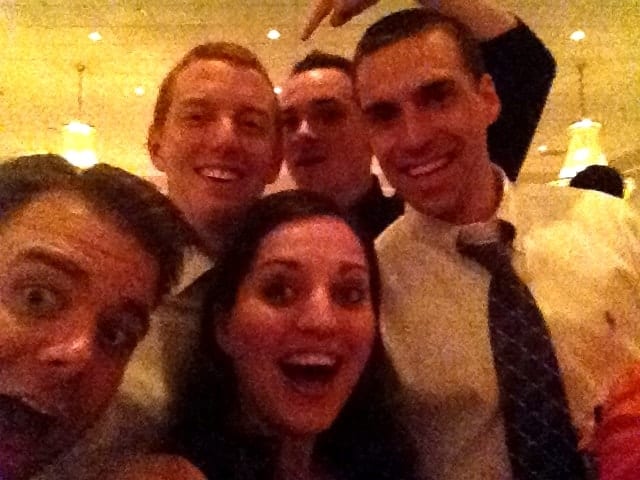 The next song was the absolute best song we could have hoped for — “Shout!” 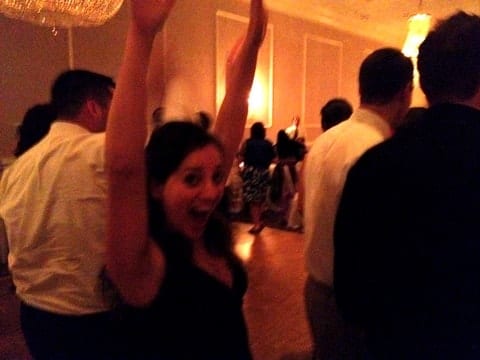 (The reason why my hands are the only ones up here are so that I could hold the pose for a photo — believe me, everyone else was shouting!)

“We need to get a photo with the bride.”

“Um, she’s right next to the groom.  He knows we crashed.”

“I don’t think it matters anymore,” I admitted.  “So what if she knows?  We have to get a picture with her!  It’s the ultimate souvenir of wedding crashing!”

And with that, we walked up to the bride.  “You look so beautiful!” I told her.  “Can we get a picture with you?” 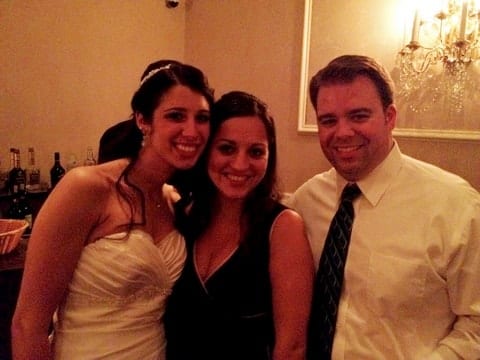 One more shot for posterity: 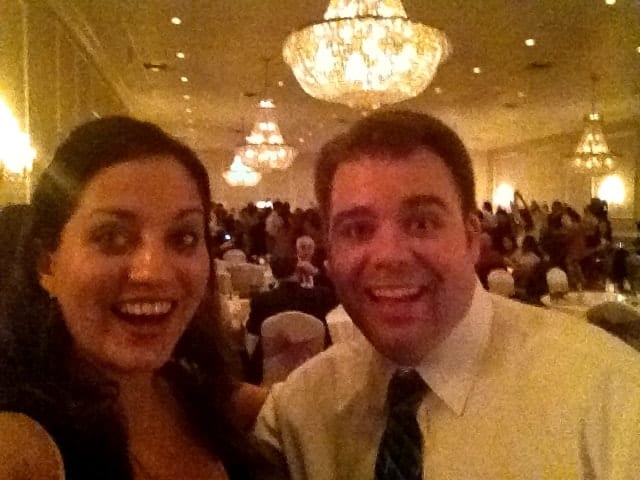 What worked about our crash is that we did it respectfully — we didn’t go in to drink their booze or eat their food, but just to dash in, dance a little bit, take pictures, and wish the best to the bride and groom.

As I headed back to the wedding I was actually invited to, I realized the universal truth — there is no need to crash a wedding when the one you’re at is so much better.

I mean, come on — our groom actually flew! 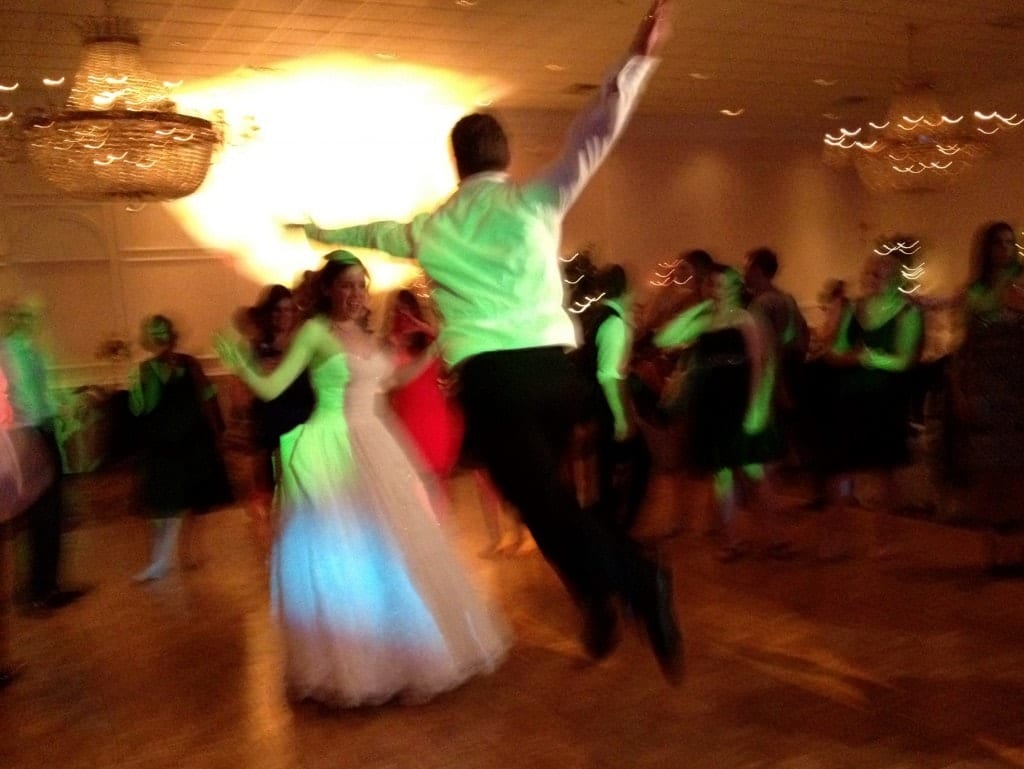 We had a few crashers of our own that night — but unlike me and Kevin, these crashers from the other wedding were stumbling all over themselves with half-empty Yuenglings in hand, heading straight for the bar.  They were unceremoniously thrown out by Kelly’s older brother Jeff.

At the end of the night, my bride, arms around her wonderful groom, Dave, still bubbled over with praise — “You two were classy crashers!  I love you for that!  I wish we got classy crashers!”

Classy crashers indeed.  Now that I’ve finally crashed a wedding — with as much respect as style — I can’t wait to do it again.