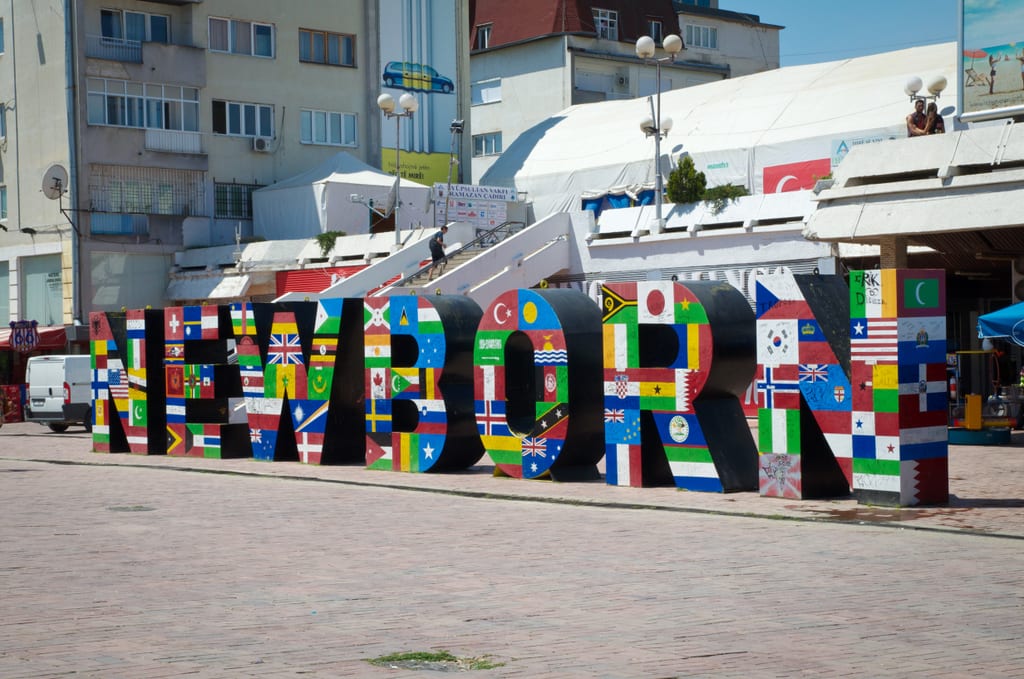 I’m on the bus from Skopje to Prizren, typing madly on my computer as I work on a freelance assignment. My only breaks are cursory glances out the water-stained window: the scenery has been growing greener and more mountainous as we edge closer to the border.

It’s my first time in Kosovo, and I don’t know what to expect. Just the mention of “Kosovo” in America brings to mind an image of war, of death, of ethnic cleansing, of bombs. Even though this took place more than a decade ago, I’m wondering just what kinds of scars the country will bear.

We pull up to the border crossing and, in typical fashion, hand over our passports to the bus driver’s assistant. I hand my navy blue passport (still soaked and foul two years after the shipwreck), and that’s when the welcome brigade arrives.

“I love this country,” says the man, gesturing to my passport. “I LOVE this flag.”

“Thank you!” I reply, delighted at his response.

“Why do you come to Kosovo?”

“Welcome,” the man says, beaming. “Welcome to you, America!”

This is only the beginning. The man sitting across the aisle from me doesn’t speak a word of English — other than saying “America!” and grinning — but we have a full body-language conversation. He’s married with four kids; he’s surprised to hear that at 28, I have a ring on my finger but no offspring.

He asks me for my phone number, the first of several times that men ask for it during my stay in Kosovo. It’s not pervy or irksome — they are genuinely concerned about my well-being and want to make sure that I’ll be okay during my stay in their country. It just makes me smile that most of the time I’m asked for it by men who don’t even speak English! 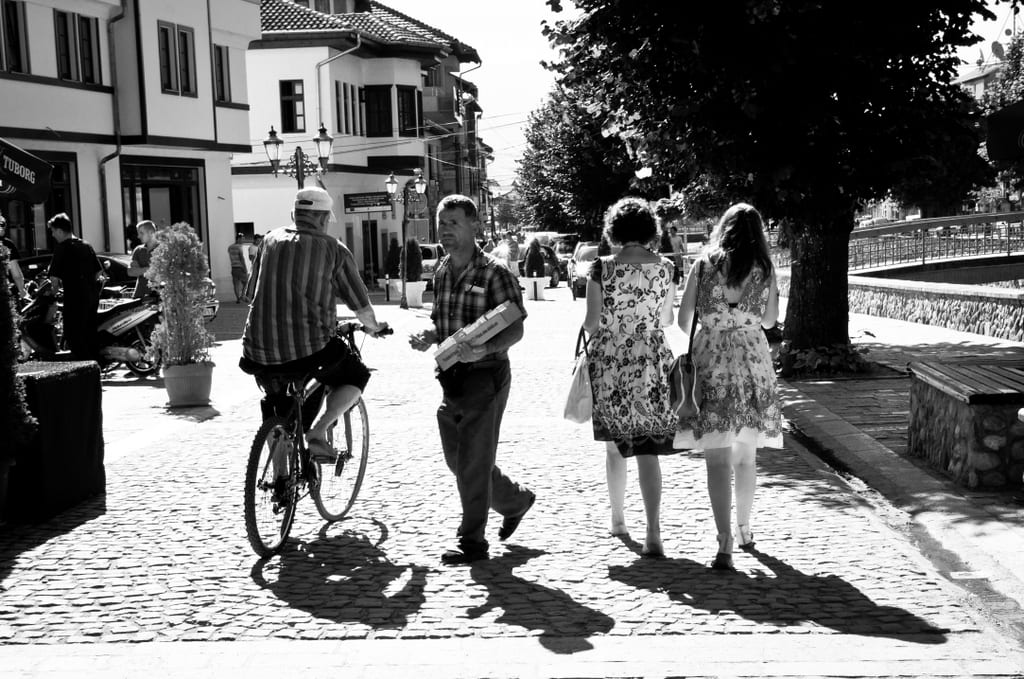 For the rest of my visit to Kosovo, I am welcomed in the warmest way possible — huge smiles and heartfelt thanks for coming.

It’s not hard to see why — when the Serbs were enacting ethnic cleansing on the ethnic Albanians of Kosovo, the U.S. came to Kosovo’s aid, stopping the Serbs and supporting Kosovans through to the end of the grisly war of the 1990s. Bill Clinton is a hero here.

Kosovo eventually declared independence from Serbia in 2008; Serbia chose to reject this declaration. Countries including the US, Japan, Australia, and most of the European Union (bizarrely, every EU country but Spain) sided with Kosovo, acknowledging its independence; many countries, including China and Russia, did not. See the full list here.

To this day, Serbia considers Kosovo to be part of Serbia — and that causes implications for travelers. If you enter Kosovo via an international border, as I did from Macedonia, you can’t exit through a non-Kosovo Serbian border. If you do so, Serbia will declare that you entered Serbia illegally.

Though I can’t definitively confirm this, I’ve  heard rumblings that Serbia will not be happy if you arrive with a Kosovo stamp in your passport, so consider taking option 1 if you want to visit Serbia again on the same passport. 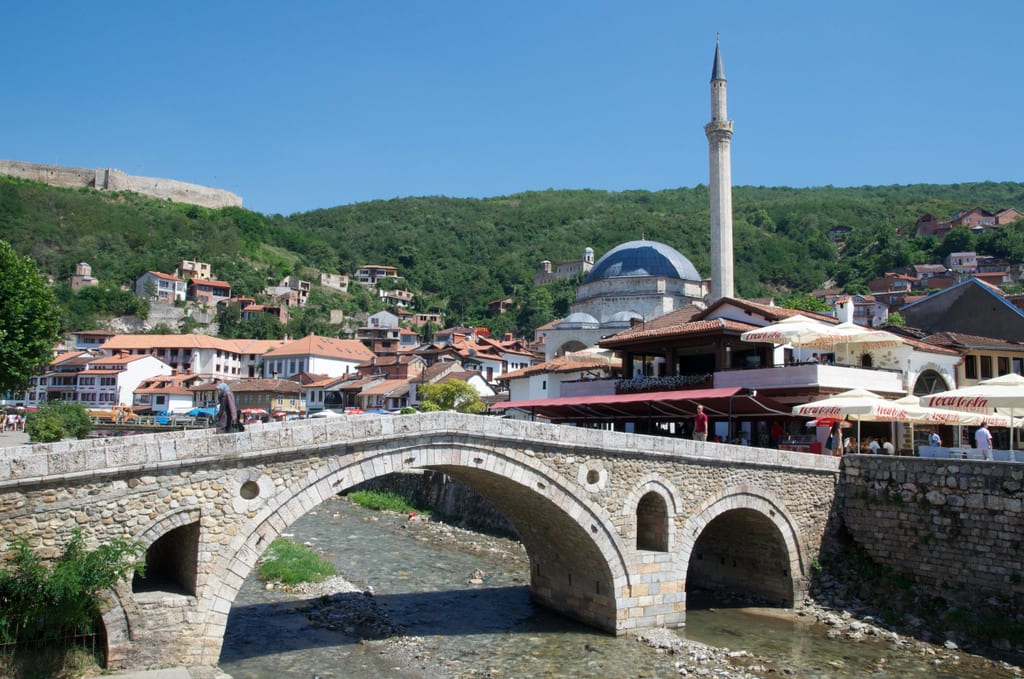 That makes sense. Kosovo is a nation of ethnic Albanians — of course they speak Albanian!

Albanian pride is on display here, the double-headed eagle on a blood-red background filling signs and banners in the streets. There are far more Albanian flags here than Kosovan flags — you even see Albanian flag sellers walking up and down the thoroughfares.

Sitting in a cafe beside the faint river, I think to myself that my waiter reminds me of Tony Dovolani from Dancing with the Stars — and then remember that he’s Albanian. And that’s not all — a quick Google search tells me that not only is Tony Albanian, he was born in Kosovo. 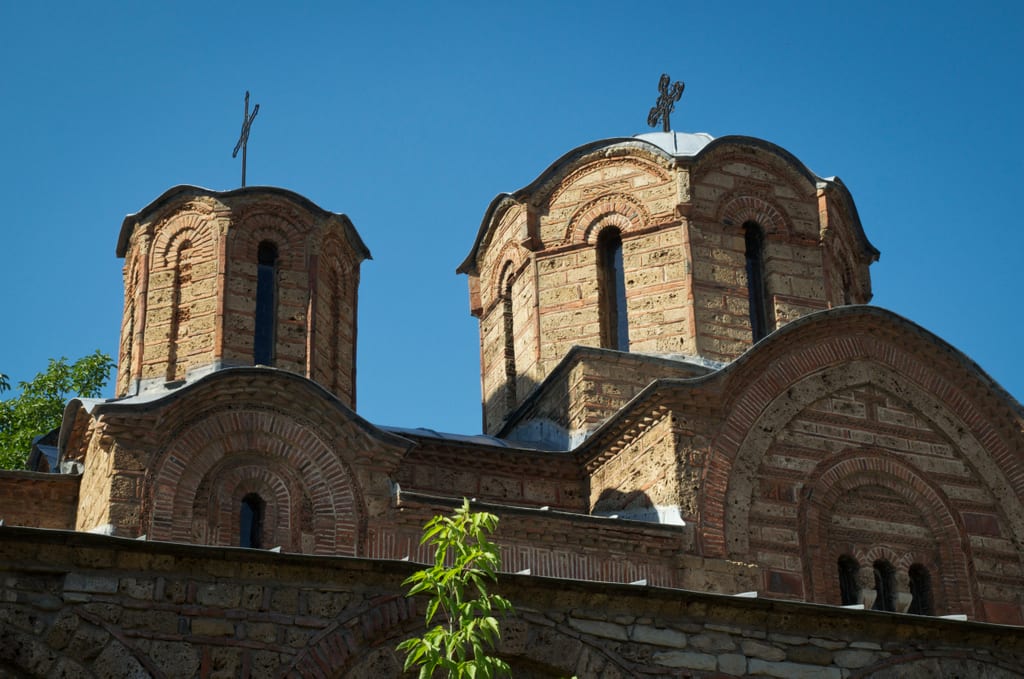 Kosovo has one UNESCO World Heritage Site — Medieval Monuments in Kosovo — and one of them is in Prizren: the Church of the Virgin of Leviša. My Lonely Planet chapter described the entrance as “unwelcoming”; turns out that “unwelcoming” is a euphemism for “closed and topped with barbed wire.”

Well, at least I got pictures. Does that count as visiting the site? We’ll see. 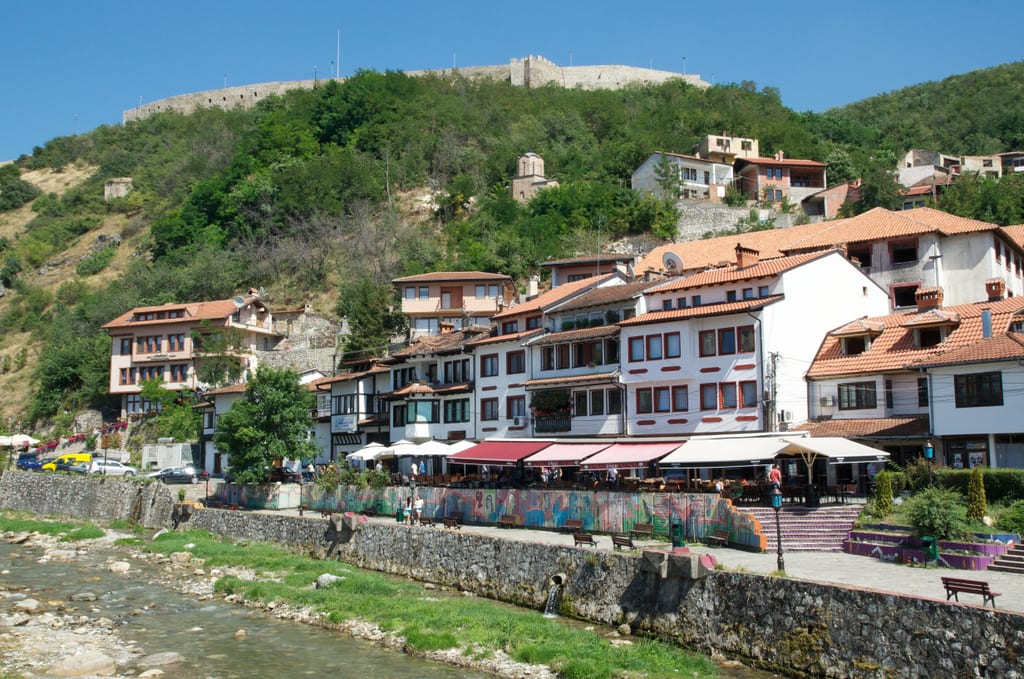 Prizren is nice — charming, as one might say — but there’s not a lot to do here, and though I love to climb to the highest point in every town, there’s no way I’m climbing to that fortress in 98-degree weather (37 C). It’s good to visit for a few hours and doable as a day trip from either Skopje or Pristina.

After half the afternoon in Prizren, I’m ready to hit up the big city. 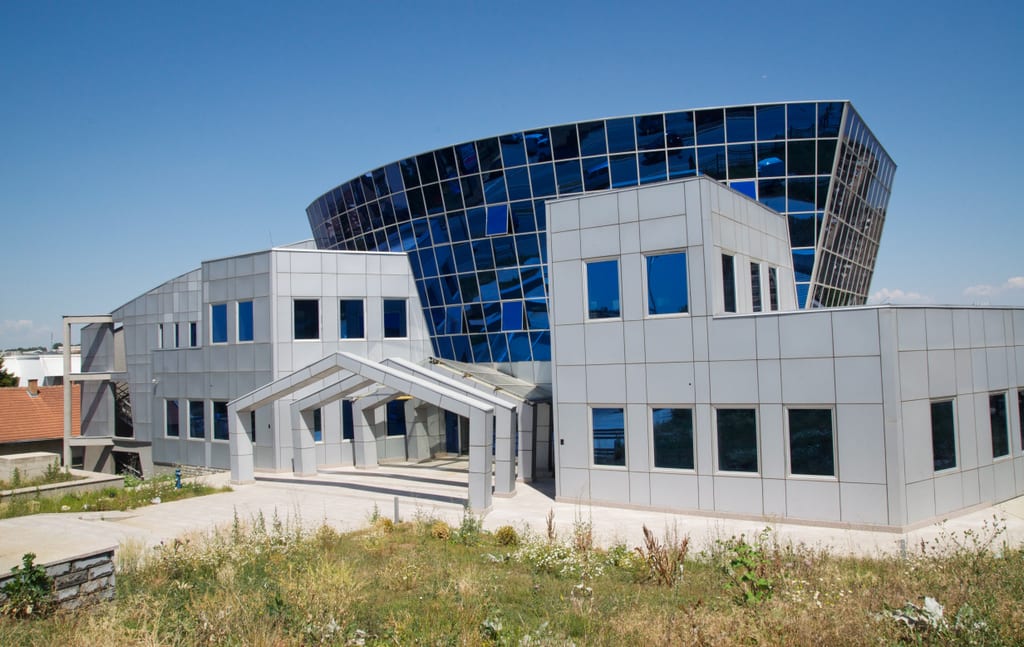 The bus ride from Prizren to Pristina is one of the stranger ones I’ve taken — the driver seems to pick up everyone we drive past, then drop them off after a mile or two. No payment necessary.

Pristina is Kosovo’s capital and it’s the largest city in Kosovo, complete with all the big city amenities: some great cafes and delicious food, not to mention a pretty cool hostel. And on top of that, the prices in Kosovo are nearly as cheap as Macedonia.

But for me, the greatest attraction in Pristina is this: 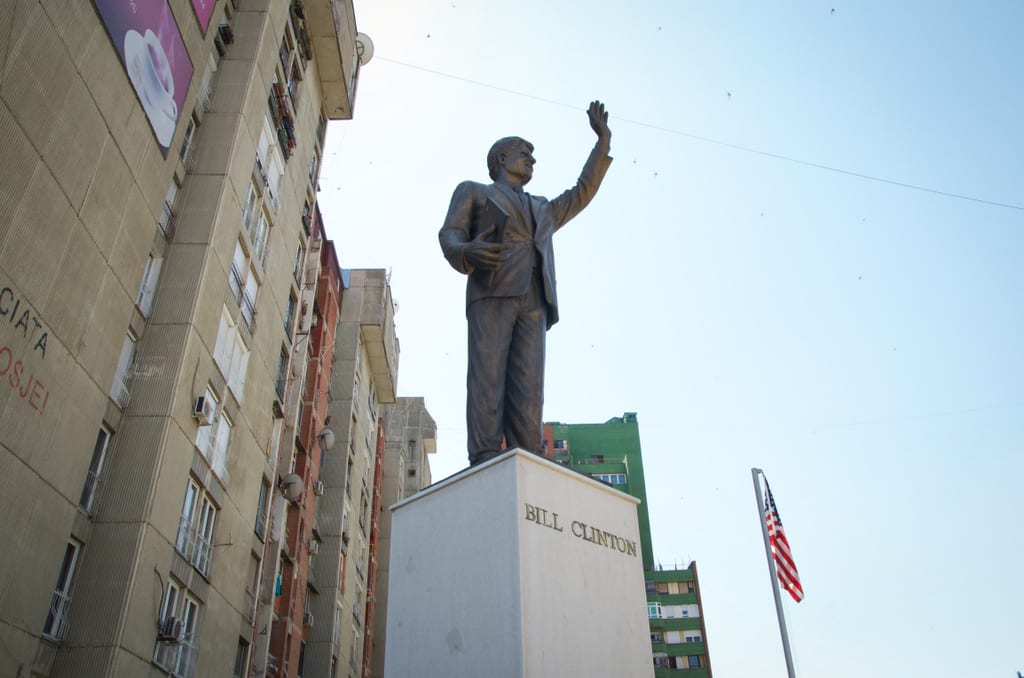 The Bill Clinton statue, just off Avenida Bil Klinton. It’s apparently a rite of passage for every American Kosovo traveler to get a shot with Bill — not that I saw another American visitor during the duration of my visit — and of course I joined in. 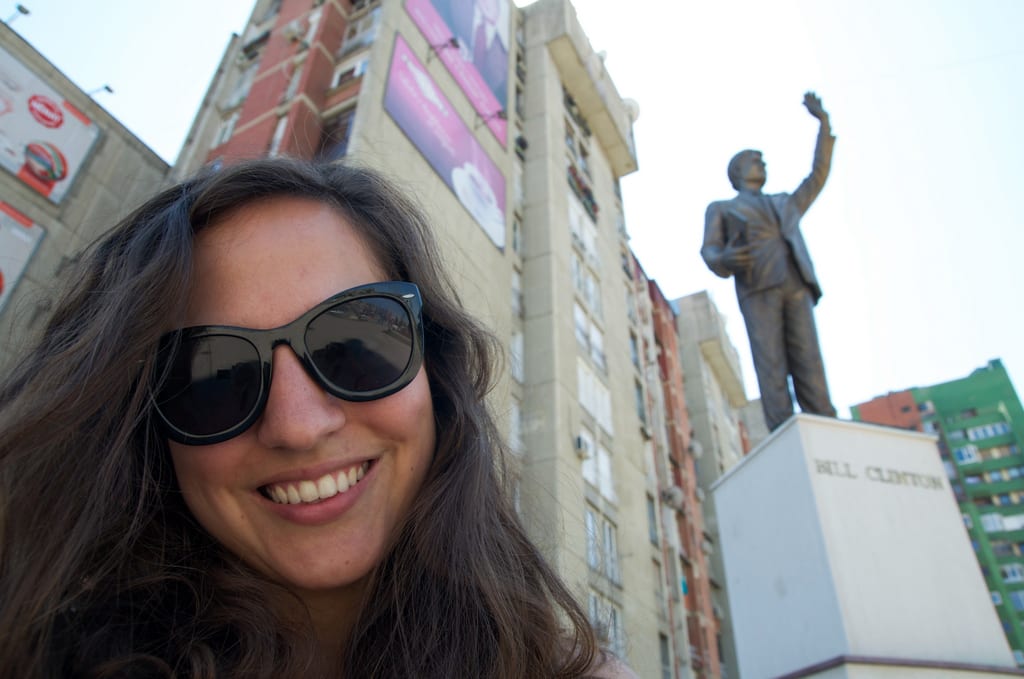 The shop next door cracked me up: 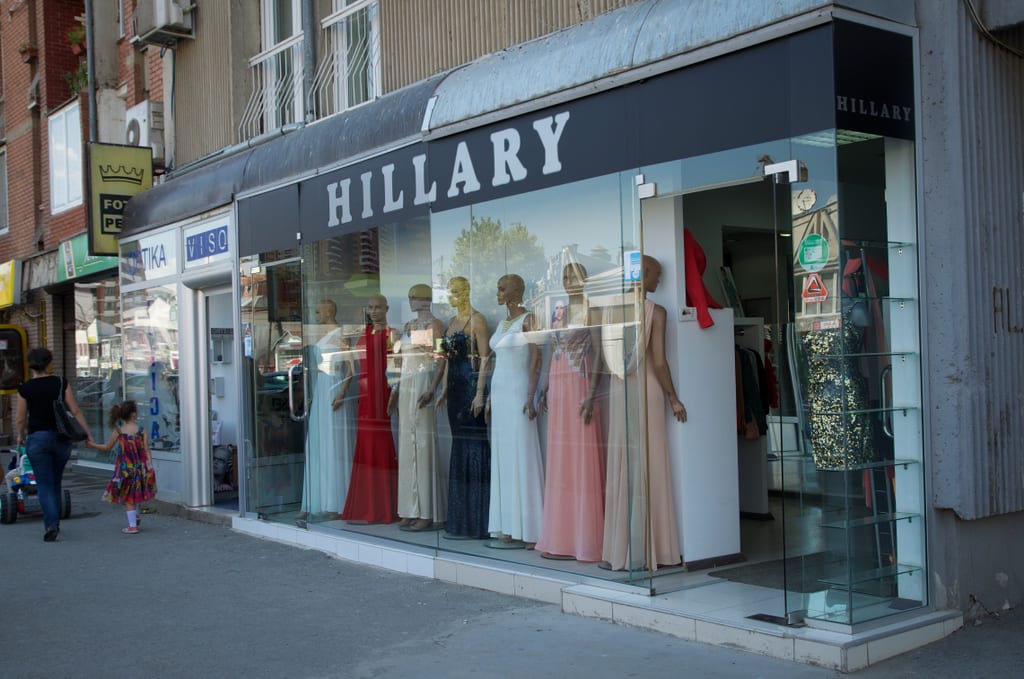 The architecture in Pristina is pretty interesting as well — among your typical Eastern European blocks, you find a few buildings that make you wonder whether the architect was doing LSD. This is the library. 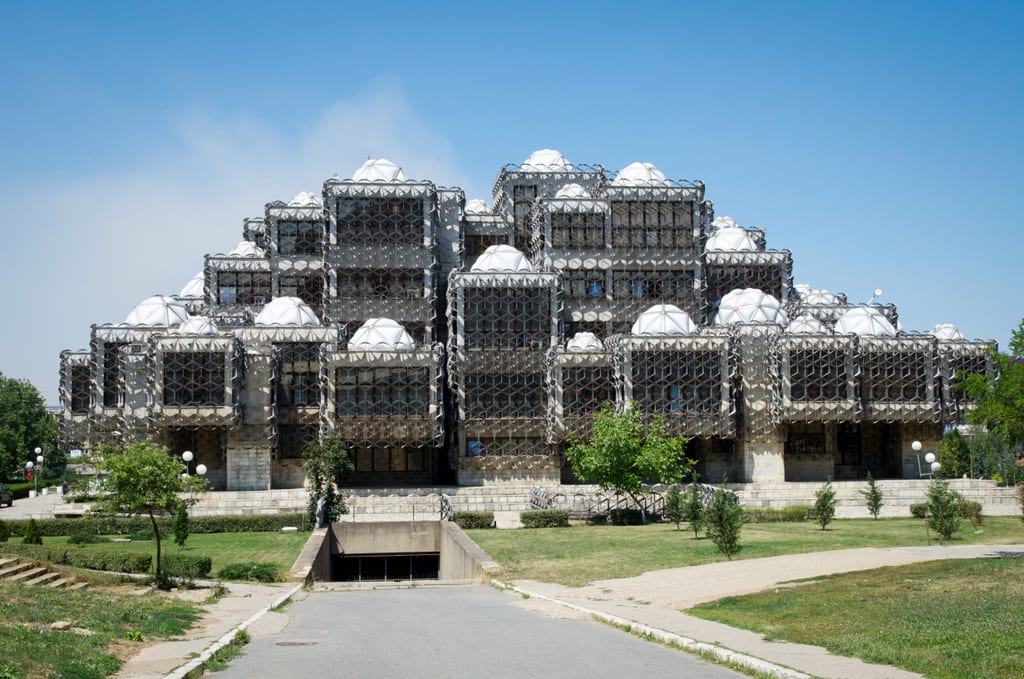 Pristina has the potential to become a spot on the ever-trod Balkan backpacking trail — but for now, I found only a few other backpackers in this city and this country. Pristina is not an obvious kind of destination. You don’t come here to check tourist attractions off on a list — you come here to feel the atmosphere and get to know it on a micro level.

After being so warmly welcomed by everyone I met, the greatest pleasure of Kosovo lies in getting to know the people. That’s the single greatest part of visiting Kosovo, and one that I hope to experience again.

63 thoughts on “Kosovo: A Warm Welcome from a Newborn Country”