Today was the second day of the Race to the Alamo, presented by the San Antonio Convention and Visitors Bureau.  The race really heated up today!

(Note: as time goes on, I’ll be posting more detailed content.  This is just the daily recap of the race.)

This was the second day of a three-day competition between three teams of bloggers: me and my sister Sarah, Carolyn and Dan of The Healthy Voyager, and Sharlene and Michelle of Trekaroo.  Click here to read the first day’s recap.

Our second day began, not unlike the day before, at a venue filled with animals: the San Antonio Zoo! 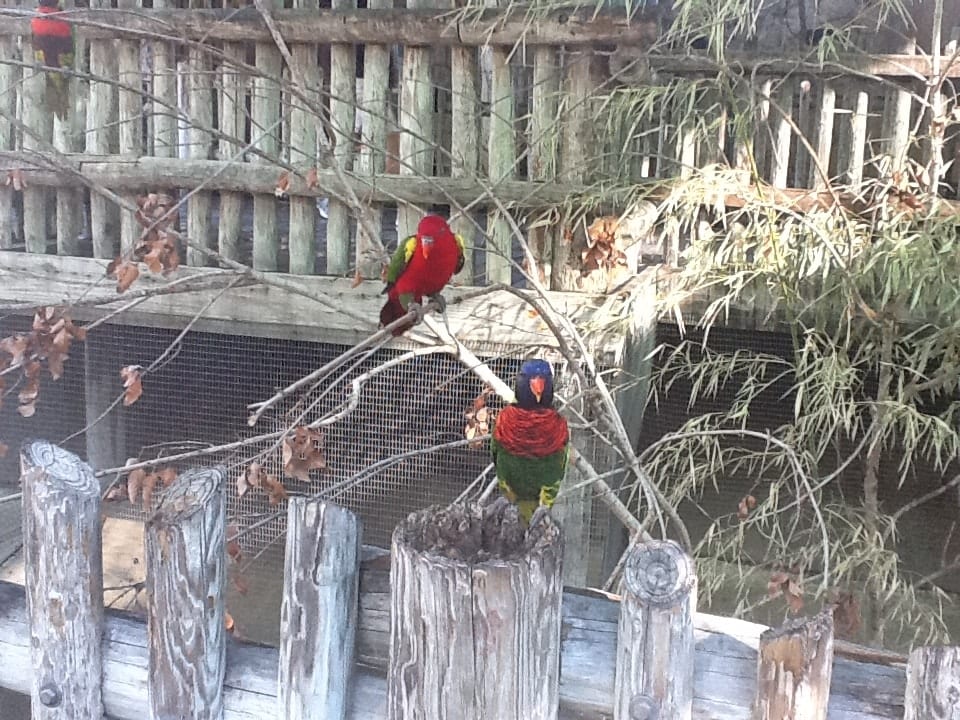 The San Antonio Zoo is home to lory birds, which look like large parakeets and feed on nectar.  You can buy nectar for $1.25 per cup and feed it to the birds.

Our challenge was to get a photo with as many birds as possible on one team member.

Those of you who know me know that I am DEATHLY afraid of birds — even more so than fish.  So there was no question that Sarah was going to be the team member doing this. 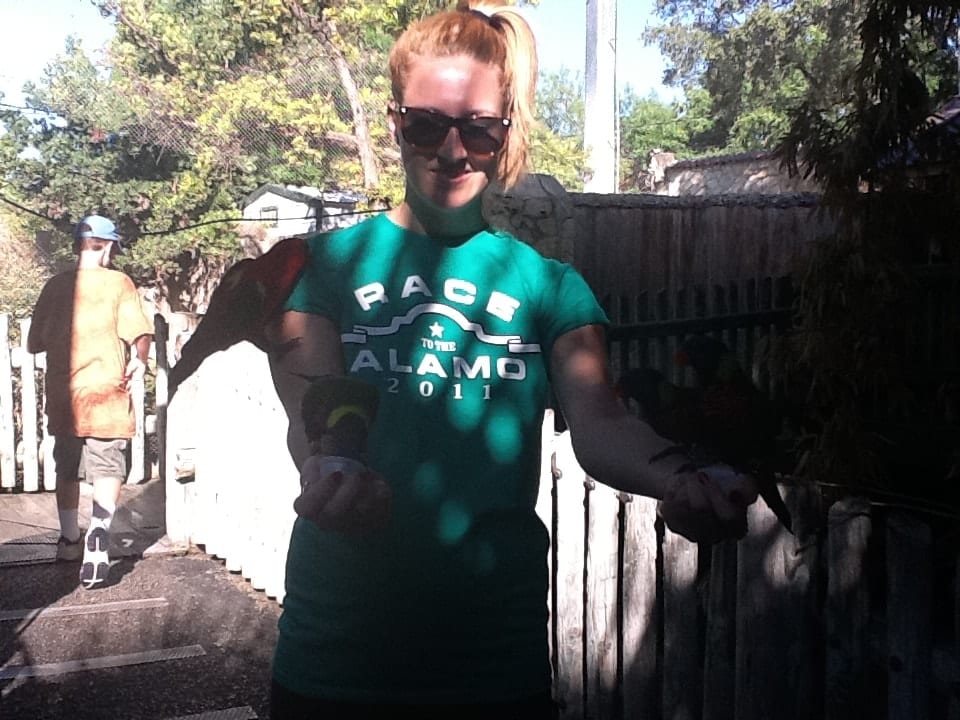 Four birds at once.

We ended up coming in second in this round — which, considering that Sharlene of Team Trekaroo had landed five but got covered in bird pee, seemed like a fair trade.

Our next challenge was to find animals whose letters spelled out “La Cantera” (the name of our next destination), and take their pictures in that order.  We could repeat animals but had to be exactly in order.

Our final animal collection included everything from the lory birds to the Eurasian eagle owl and the crocodile-like tomistoma.  The San Antonio Zoo has a great collection of animals — I particularly loved the okapi (which looks like a cross between a deer and a horse, but wearing zebra-print leggings!).

After the zoo, we headed to The Shops at La Cantera, San Antonio’s fanciest shopping center.  If you want to do designer shopping, La Cantera is where you want to go!  We had a tour at Neiman Marcus and grabbed some Mexican food at Z’Tejas. 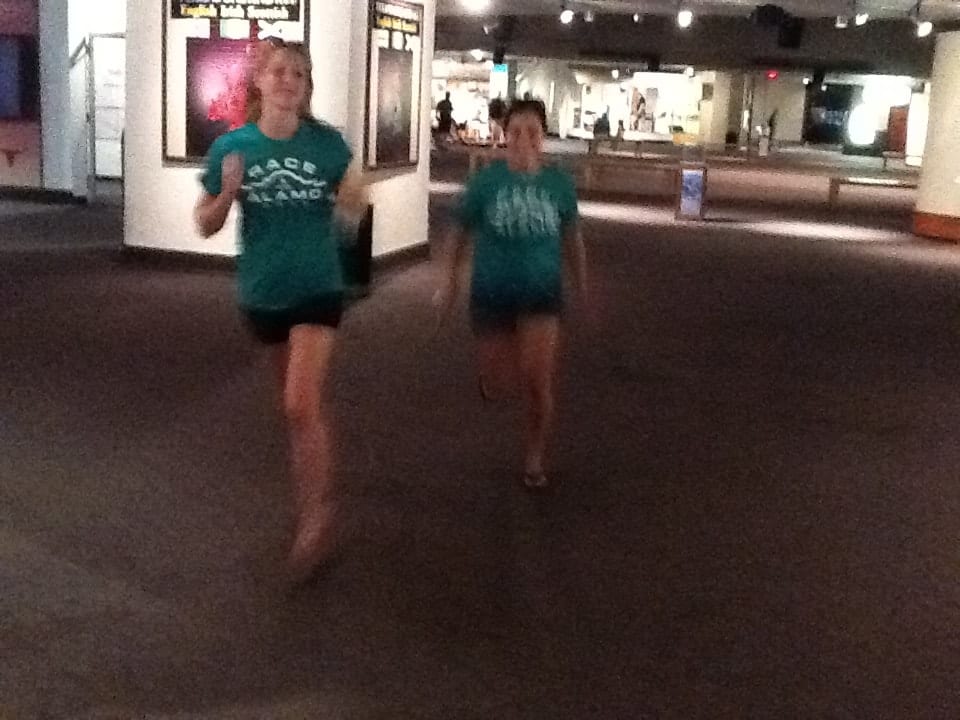 We next arrived at the Institute of Texan Cultures, which features sections on all the different ethnic groups who immigrated to Texas.  I wasn’t surprised to see the Chinese, French and German communities — but I was surprised to see the Swedish, Japanese, Czech, and Wendish (no, I didn’t know who they were, either)!

I’m fascinated by ethnicity and population in America (and around the world, really!), and the Institute of Texan Cultures is somewhere I’d like to spend much more time.

We were given a list of 15 questions and 15 minutes to answer them, sans iPads and technology.  Whichever team came in first would get a 30-second head start in the next challenge.

This is where our sisterly intuition paid off.  We ran through the museum efficiently, breaking apart when we needed to and quickly meeting up again, and we got back within five minutes, much to the astonishment of the judges.

We won, and got that 30-second head start. 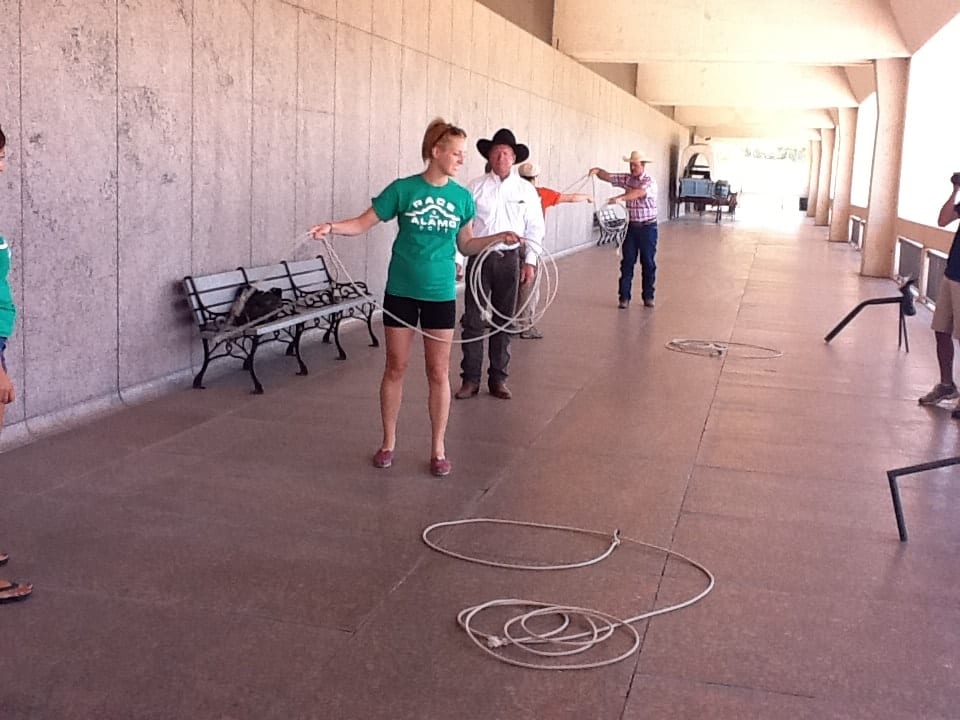 Our next challenge was to successfully throw a lasso.  We each had our own cowboy teach us how to throw a lasso and rope a fake calf!

Sarah was up first.  Unbelievably, she roped her calf on the first try!

And then I came up.  Again and again, I missed the calf, and our 30-second lead evaporated.  But on my seventh throw, I successfully roped the calf!

Winning this event pushed us over the edge — we were the day’s winners!

We celebrated by letting our cowboy use us for some demonstrations.  They turned out unexpectedly. 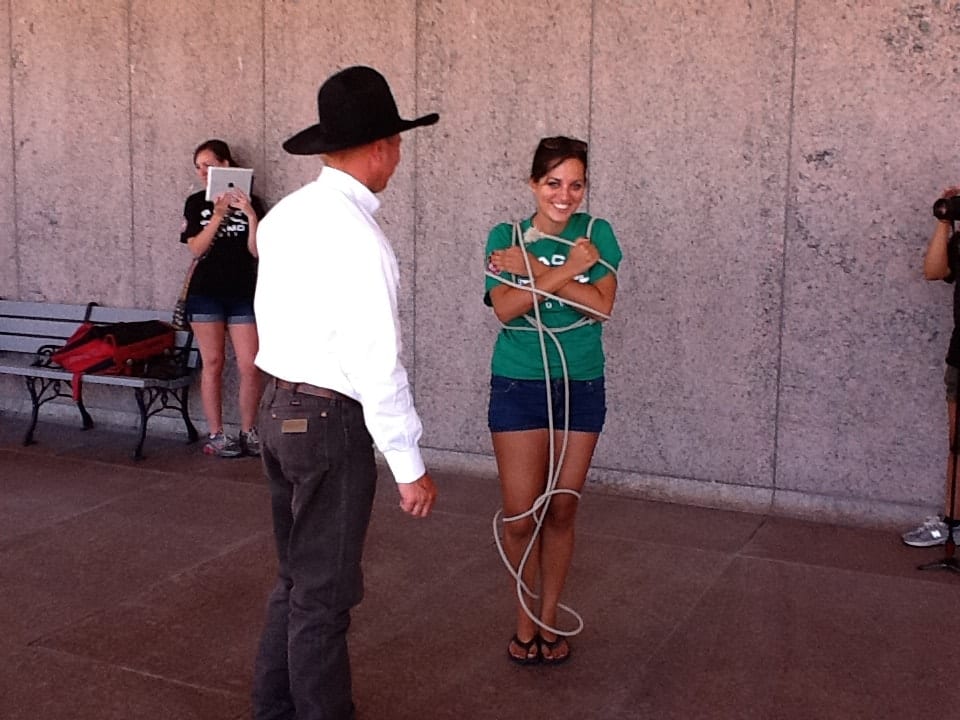 “NEVER TRUST A MAN WITH A ROPE!” he admonished us.  Consider that lesson learned.

Our prize: a helicopter ride over San Antonio with Alamo Helicopter Tours!

I couldn’t believe it.  I had never ridden in a helicopter before, nor had my sister or my mom, so it was a first for all of us.  Gleefully, we jumped into the van, drove to the airport, found out we were early and treated our guide, driver and film crew to Sonic to celebrate (YEAH!), and then got ready to fly.

Here is the video I got as we flew over the city:

There are no words to describe how amazing it felt.  What a great experience! 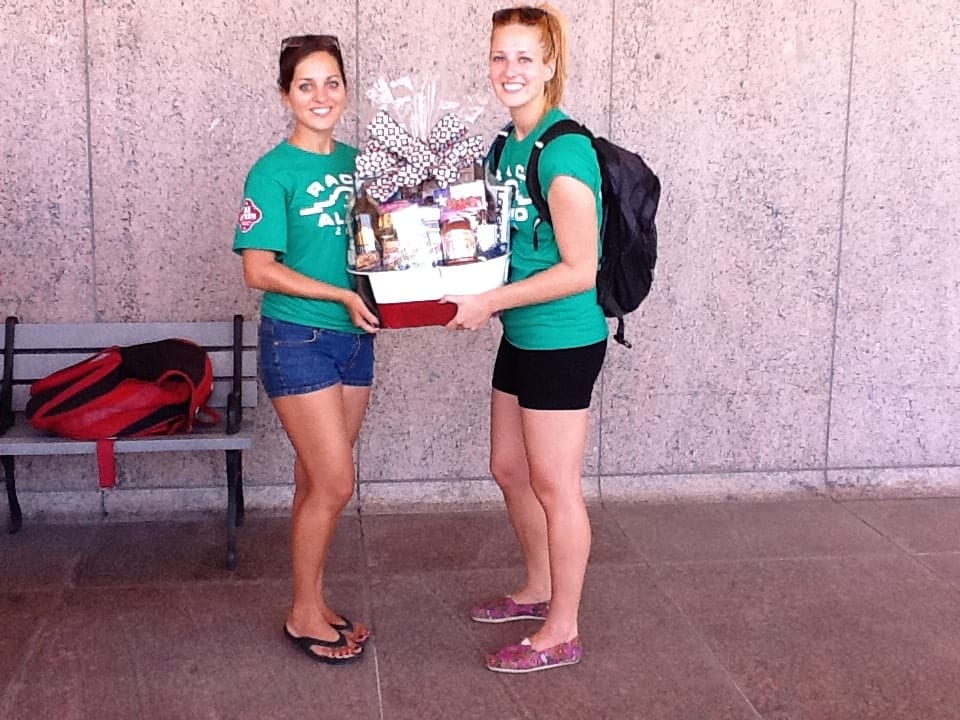 Sarah and I were happy to place first today, but we have no idea how this will help us overall — and we need your help more than ever.  40% of the win is determined by your votes — so please vote for me and Sarah to win the race!  You can vote once per day through August 31, and each time you vote, you are entered to win a fabulous trip to San Antonio!

I want one of my readers to win this trip — so make sure you do all you can!

My trip to San Antonio was sponsored by the San Antonio Convention and Visitors Board.  All opinions, as always, are my own.

4 thoughts on “Race to the Alamo, Day Two: Zoos and Lassoes!”