The following branded content post is brought to you by TravelPony. In this instance, TravelPony’s staff asked me to give their site an honest review, warts and all. Frankly, I think their site is great, which is why I agreed to this post. All opinions shared in this piece, as always, are my own.

I fancy myself a bit of a travel deal ninja. I love running around and finding deals that seem hidden to the rest of the world, and I rejoice when I find an amazing one (remember my $280 flight from Dubai to Tokyo?).

So when a new site comes around and tells me that their site brings in cheaper hotel rates than the big sites, I’m intrigued.

The team at TravelPony contacted me and asked me if I were interested in running a review of their site in the form of a post. I get dozens of offers like these a week and most weeks turn every single one down — but TravelPony was different. This was a site that had something I wanted — lower rates for hotels.

I decided to put TravelPony to the test, comparing their rates to those of Kayak, the site that usually finds me the lowest rates on the web. Here are three varying itineraries:

Boston, Massachusetts. October 18-20, 2013. Two adults, one room. A fall foliage weekend — definitely a popular time to visit the city, just over a month away. The Doubletree is a good midrange hotel in the heart of downtown Boston.

Holy crap. That’s savings of nearly $150 per night. That is insane.

London, England. September 13-16, 2013. One adult, one room. Last minute booking — during London’s best summer in years! The Millennium Hotel Knightsbridge is a luxury hotel on Sloane Street — you can’t do much better than that for location.

Once again — it’s cheaper through TravelPony. Color me even more impressed.

Las Vegas, Nevada. December 30, 2013-January 3, 2014. Two adults, one room. NEW YEAR’S IN VEGAS. That’s pretty much the ultimate hotel test. The Palms is one of my favorite party spots in Vegas (in part because celebrities always seem to be there!) and spending New Year’s there would be a dream come true.

First of all, the Palms is that cheap over New Year’s?! BOOK THAT. That is a great rate anytime, let alone on Vegas’s biggest party night of the year.

And second, once again, TravelPony has offered a rate much lower than my usual cheap booking site. 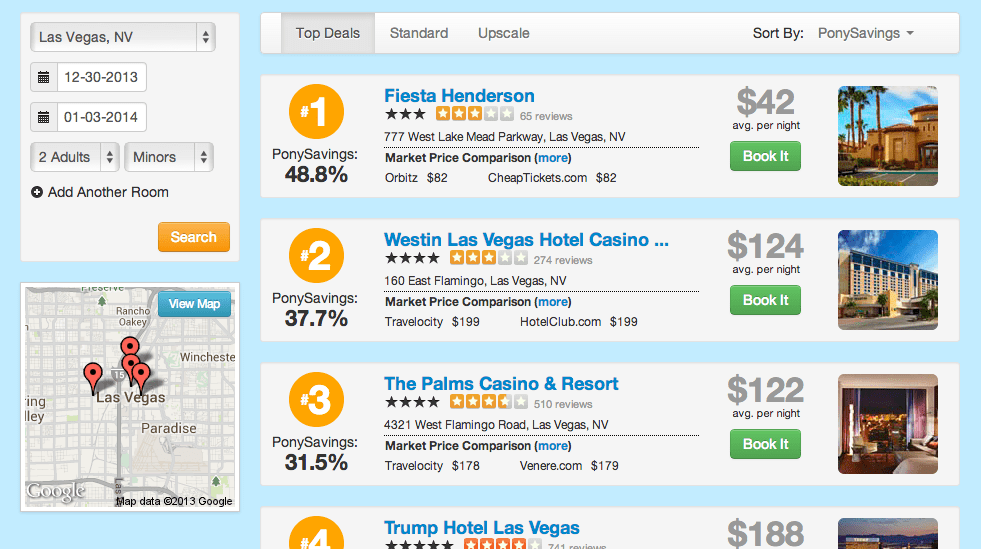 How is this possible?

TravelPony says their rates are this low because they can’t show them to the public — only to their users. You join the site either by using Facebook — and they never post anything to your wall without your permission, nor do they use deceptive means to use your profile to spam others, unlike certain other travel sites that shall remain nameless — or by creating a new profile.

The site’s emphasis is on social media. If you find a deal, they ask if you’d like to tell your friends via Twitter, Facebook, or LinkedIn. If you don’t want to share, they allow you to check a box reading “I promise to tell my friends about this amazing deal.”

They are banking heavily on word of mouth and using social media to do so. It’s an interesting idea — but to be honest, it’s possible to opt entirely out of using any social media with TravelPony, and I’m curious as to how that will affect its bottom line.

TravelPony doesn’t give you unlimited hotels — it just pulls from a selection of its hotel partners. For example, I was only able to find two hotels in London on those last-minute dates.

At this point in time, TravelPony is only live in 24 cities — 22 US cities, London, and Paris. That’s quite limited and because of that, I sadly won’t get a chance to use TravelPony for myself for quite awhile (I get back to the US in early April). I hope to see them expand in the future.

Additionally, the site only allows you to book out six months in advance. For most people, that won’t be an issue, but I’m someone who likes to search as far in advance as possible, just to get ideas of pricing, and I found it inconvenient to those needs of mine.

If you have a specific hotel in mind in one of the cities they cover, definitely check out TravelPony to see if they have an even lower rate posted. TravelPony is also good if you’re looking to book a midrange to luxury hotel and open to suggestions.

If you’re looking for accommodation on the low end — specifically, the cheapest accommodation possible — TravelPony is probably not the best source for you. It’s worth checking, though, because you never know what you can find.

Will I be using TravelPony in the future? You can bet on it. Any site that gets me much lower rates than my go-to booking site will definitely be seeing business from me in the future.

16 thoughts on “TravelPony Review: I Can’t Believe How Cheap These Hotels Are”