After a day of Vikings, parades, and traditional music, it was time for the main event: Up Helly Aa, Shetland’s Viking Fire Festival!  Fire, torches, parades and glory!

It began at 5:00 PM with the children’s Up Helly Aa.  Did you know that the kids get an Up Helly Aa of their own? 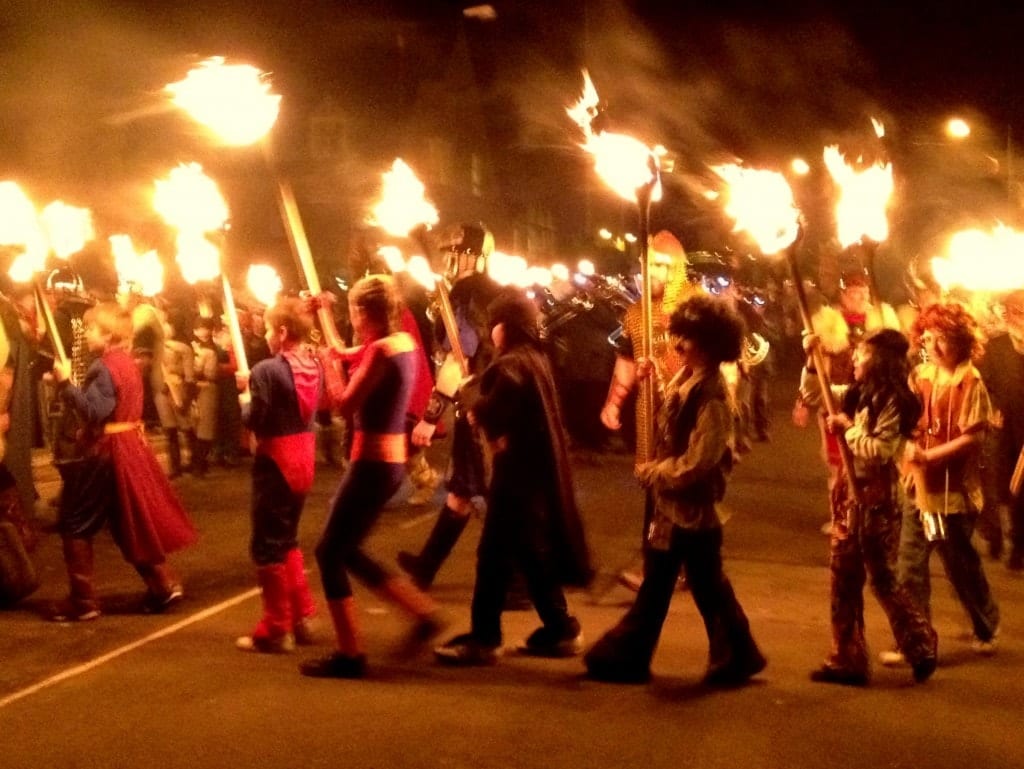 Just like the main Up Helly Aa, a group of them were dressed as Vikings, and the rest were dressed in costume.  For the kids, that meant dressing up as Superman, Spiderman, Batman, and disco dudes!

And then came the first bonfire! 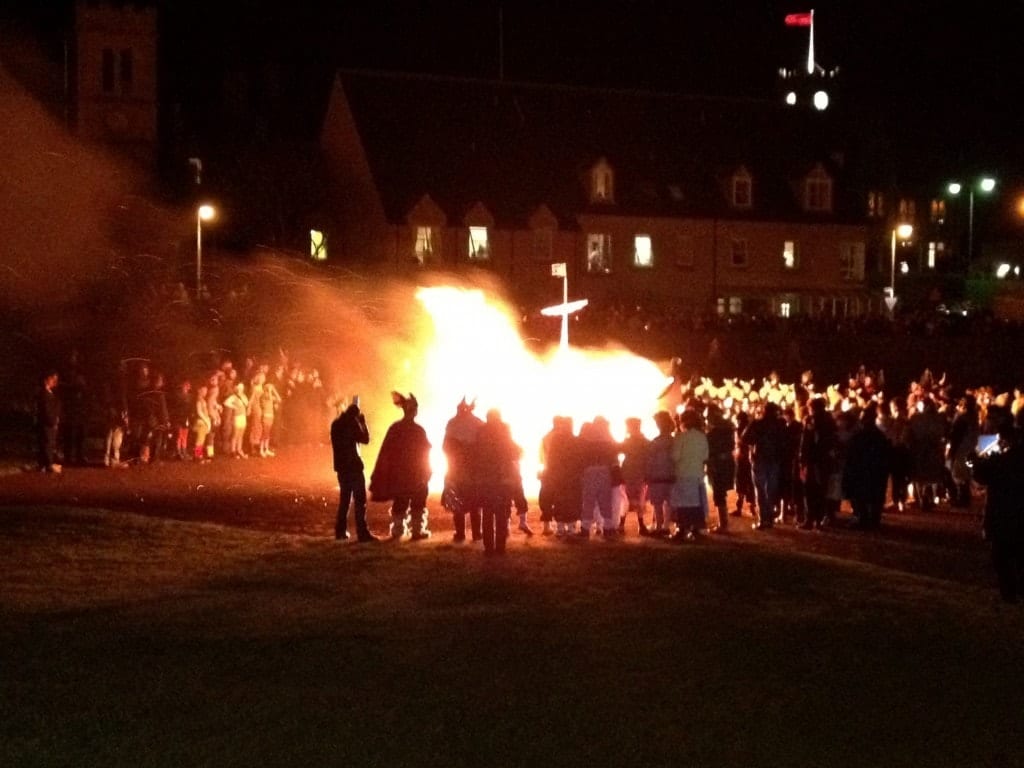 I knew the kids had their own bonfire, complete with their own little galley that they set on fire — but MY GOD!  The kids were not only holding torches, they FLUNG THEM INTO THE BOAT.  Most of them at the same time, from every direction, burning torches being flung everywhere!

This festival could NEVER happen in the United States.  Could you imagine the mommy outcry?

As the fire burned, I headed back to the hostel, just across the street, to get ready for the evening festivities.  A few of the guys had skipped the kids’ Up Helly Aa, so we hung out, drank wine, and had a brief Queen singalong with me behind the piano. There are few things I love more than leading a singalong behind the piano!

And then it was time for the main event: UP HELLY AA! 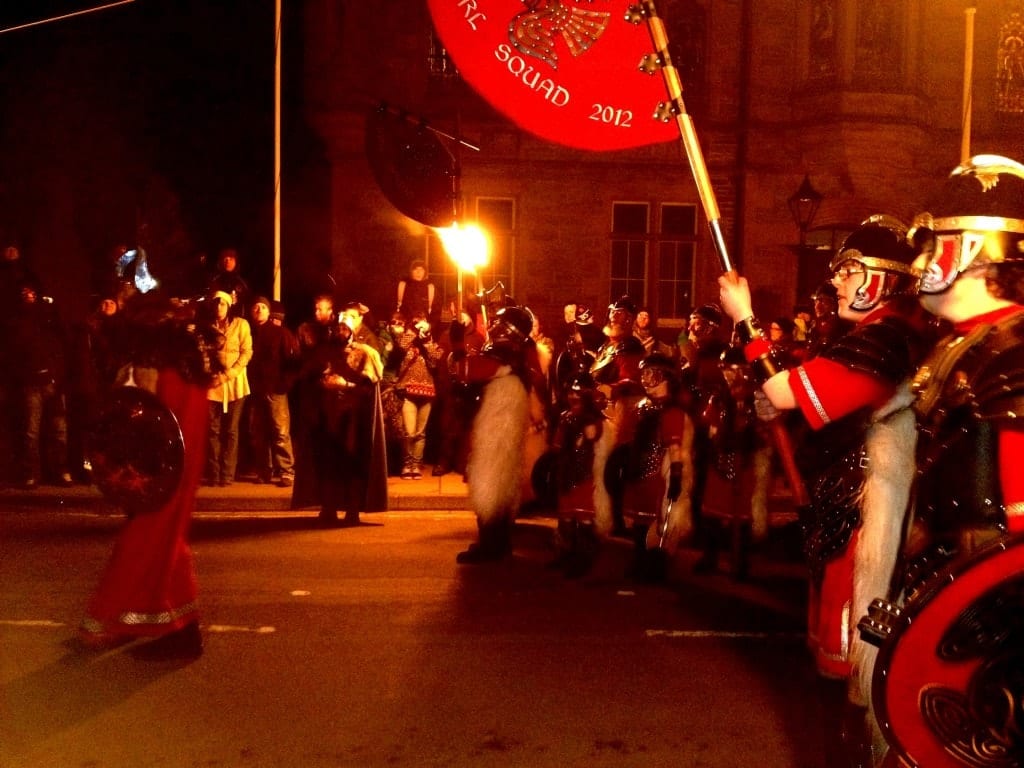 Our guides, Dougie and Tony, have been to Up Helly Aa so many times that they know the best places where to stand.  (I know I sound like a broken record by now, but I am SO glad that I booked this tour with Haggis Adventures instead of going on my own!  I wouldn’t have had a clue about stuff like this!)

We went to stand on the slanted grass by the town hall, where the procession begins.  It wasn’t the most comfortable place to stand in my heeled leather boots — my Altrec Timberland boots would have been a far better choice to wear, but they were muddy from hiking up the Shetland hills.

And then explosions rang out!

“Take pictures when they light up,” Dougie told us.  “It lights up pink and it looks great in pictures.”

He didn’t have to tell me twice. 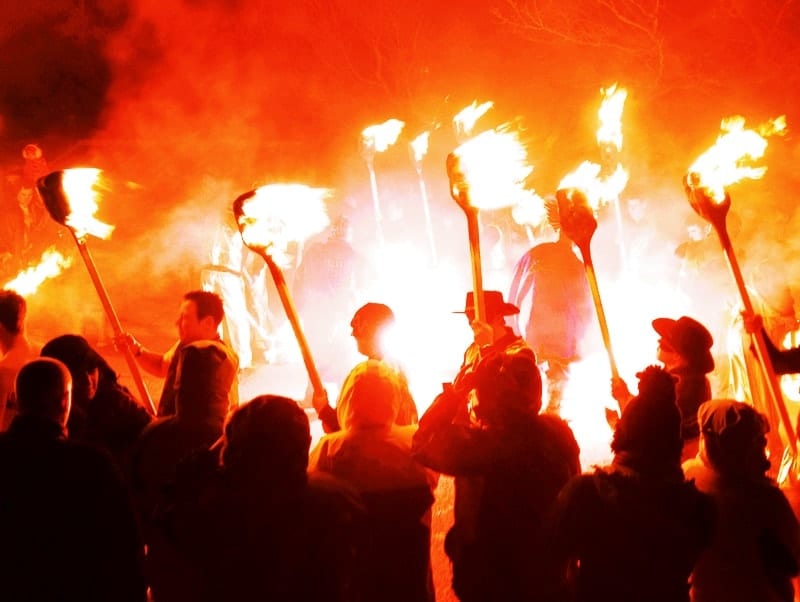 At that point, the procession began.  As earlier, it began with the Vikings and the galley, with the Baby Vikings — the adorable little boys dressed up like Vikings — riding on the galley as the torches burned. 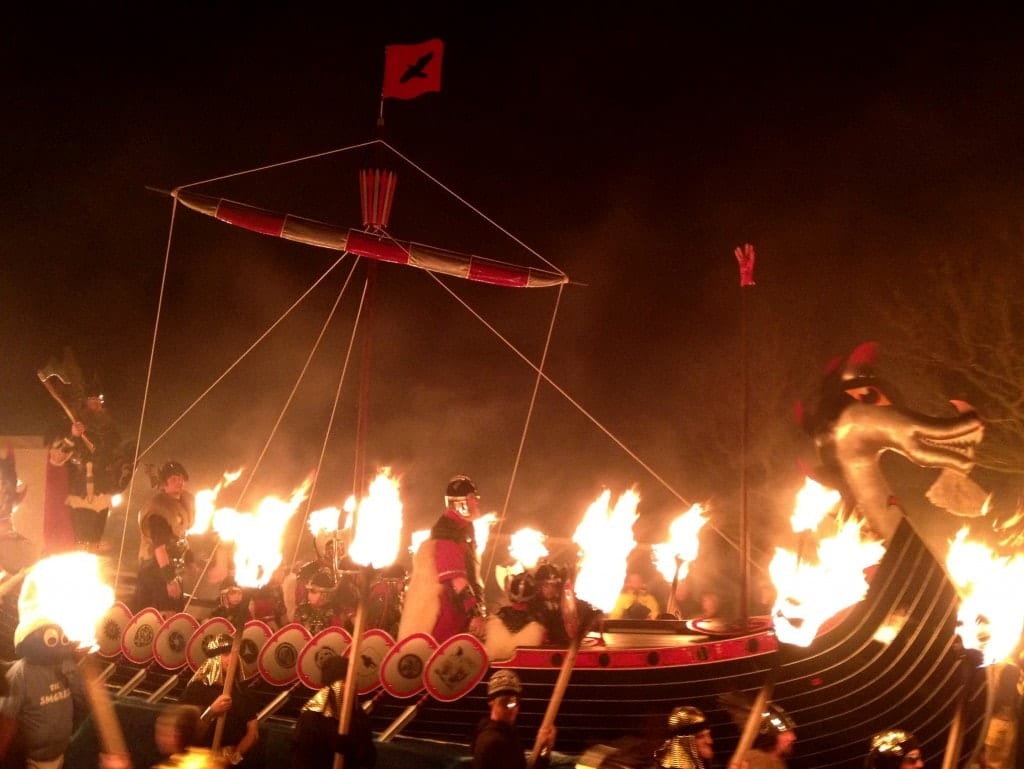 Following them were men in every kind of costume.

Drag was a popular option. 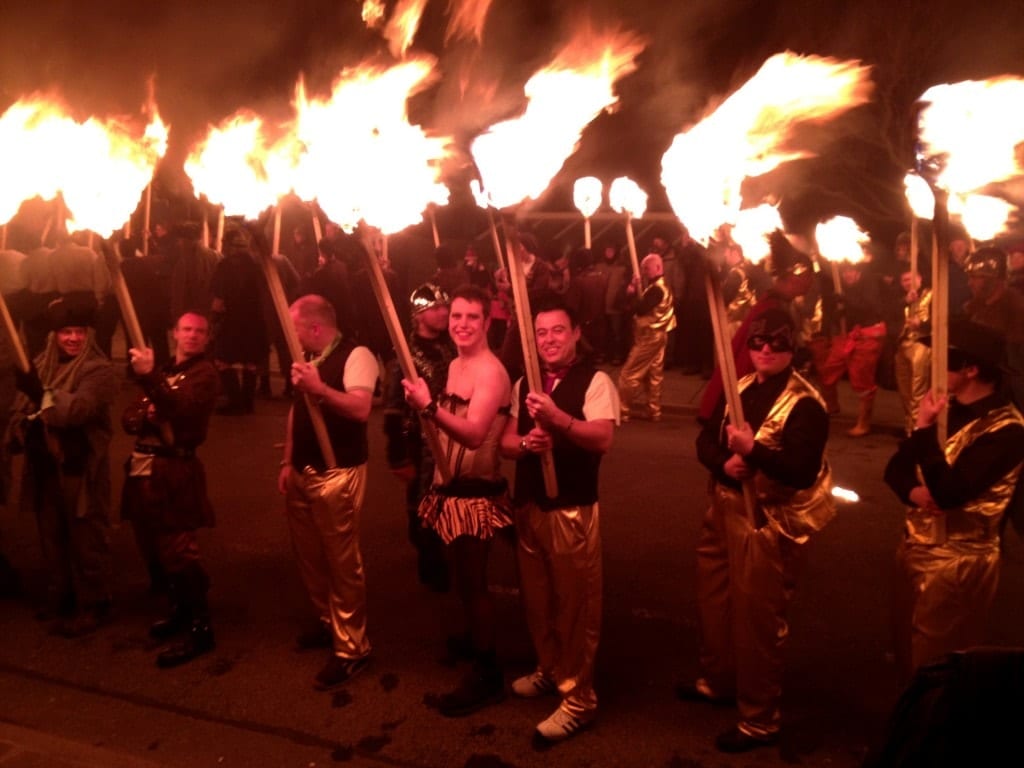 And those torches were SO heavy!  I think they must have weighed more than ten pounds.  Imagine carrying that all night.  From two minutes in, the men were resting the torches on their hips.

Take a look at the video here:

As soon as the procession finished, Tony grabbed us and had us join the end of the line.  We followed them to the field, and at that point our split to get the best view of the boat.

I lucked out — the tiny open spot I wedged myself into happened to be right in front of where the galley would be parked!

I was aghast at the sheer number of men participating in Up Helly Aa.  Take a look at the torches: 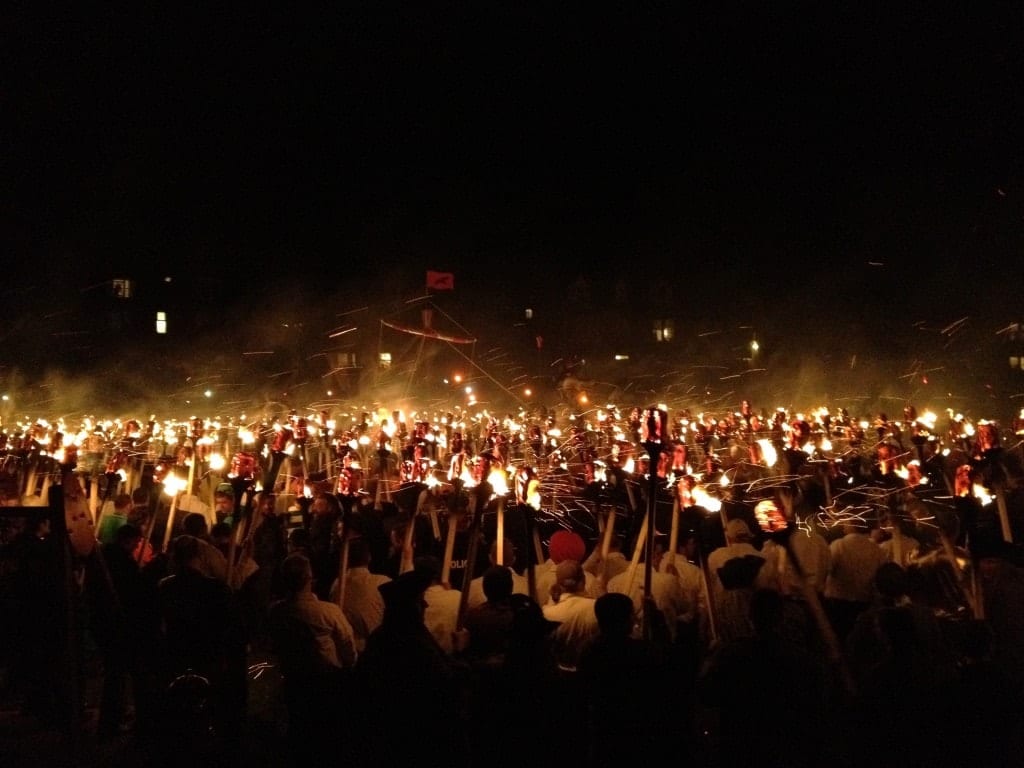 The participation percentage is staggering — especially when you consider that there are multiple Up Helly Aas in Shetland, not just this one.  EVERYONE does Up Helly Aa!

Enough of the numbers.  On to the good stuff.  Here are the torches being thrown in:

It was exhilarating.  I made friends around me — Shetlanders are just as open and friendly as the mainland Scots — and we cheered as the fire burned.

Up Helly Aa is truly a very special event. The spectacle and the strangeness combined with the warmth of the locals and, well, fire, made it the best festival I have experienced so far.

It was 9:00 PM when the fire ceremony ended.  And I had a ticket for the hottest after-party in town — the Lerwick Town Hall.  Stay tuned for the next phase.