In Southeast Asia, the line between prostitution and dating is often murky. Especially between young local women and much-older Western men.

In Chiang Mai, east of Tha Pae Gate, you’ll find dozens of bars where local women wait for Western men to arrive, hoping to become their girlfriends and have access to their money.

In Sihanoukville, Western guys who go home with Khmer girls they meet in bars are often shocked to hear them demand money afterward.

In Saigon, hair and nail salons are often fronts for prostitution rings.

But what happened in Phnom Penh was something else entirely.

My friends and I headed out to a bar.  Upon arriving, there were about ten customers, including the six of us…and seven girls behind the bar, a few more on the floor, all of them dressed in identical jackets.

Now…those of you who have waited tables or tended bar (something I think everyone should do at some point in their lives), you can tell me right away what’s wrong with that picture.  In a typical establishment, there would NEVER be that many people working.

These girls were very likely prostitutes.

The boys played pool.  I hung out at the bar, talking to the girls in the jackets.  Soon, they convinced me to play this game with them:

I had never seen it before in my life. (Though I believe I’m in the minority.  My friend Dave saw this picture and said, “SHUT THE BOX!! Classic Game – also known as Tric-Trac, Canoga, Klackers, Zoltan Box, Batten Down the Hatches, or High Rollers….”  Perhaps it’s more popular in the UK?)

One person rolls a pair of dice. If you get a two and a six, for example, you can choose to turn over the two, the six, or the eight, as it’s the sum.  Once you turn over one number, you can’t turn it over again.  The goal is to turn over all nine numbers with no repeats.

Well, obviously, as a first-timer, I lost.  Frequently. Despite calculating probability in my head with every roll.

And I had to buy the bar girls plenty of tequila shots.

(This is normally where I’d include a picture of the girls with their shots, but I think their privacy should be respected considering their likely alternate profession.)

Next, we headed to Heart of Darkness, one of the most popular dance clubs in Cambodia. 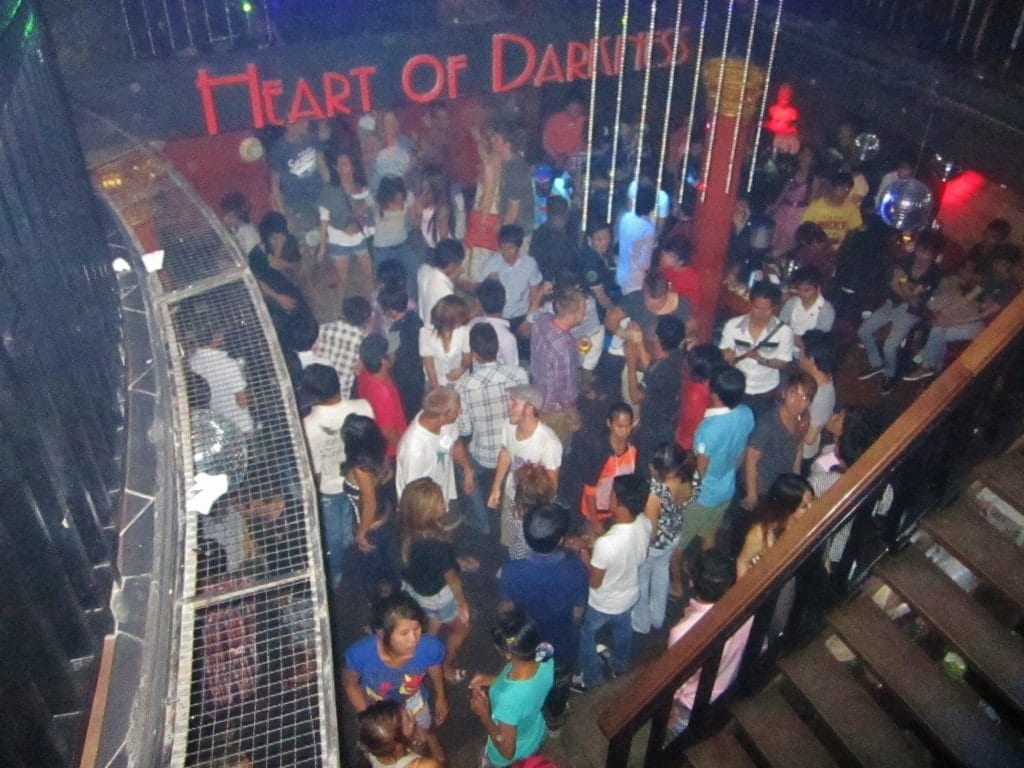 Now, while I’ve been to my share of bars in Southeast Asia, this was the first time I had been to a proper, decent dance club in months. And it was amazing, from the music to the Angkor-themed decor to the beautiful crowd.

Well, mostly beautiful.  Amidst the gorgeous Khmer girls, I spotted an old man with long white hair and mutton chops, sweat dripping down his brow, his arms flailing like chicken wings.

A stunning Khmer girl, probably a few years older than me, saw me staring and leaned into my ear, pointing to the man.  “My husband — he loves to dance!” she said with pride.

It never fails to shock me, how happy some of these girls are to be married to Western men, no matter how old or fat or unattractive.

Either these girls are damn good actresses or they actually mean it.

“Kate, you lost a LOT of money to those prostitutes!” Ste told me the next day.

“I’m Adventurous Kate, and I’ve been taken by a hooker!” I crowed, laughing at the absurdity of it all.  “Cross that off the bucket list!”

Those of you who have traveled in Southeast Asia — or Las Vegas, even — I know you’ve got stories to tell.  Have you been taken by a hooker?