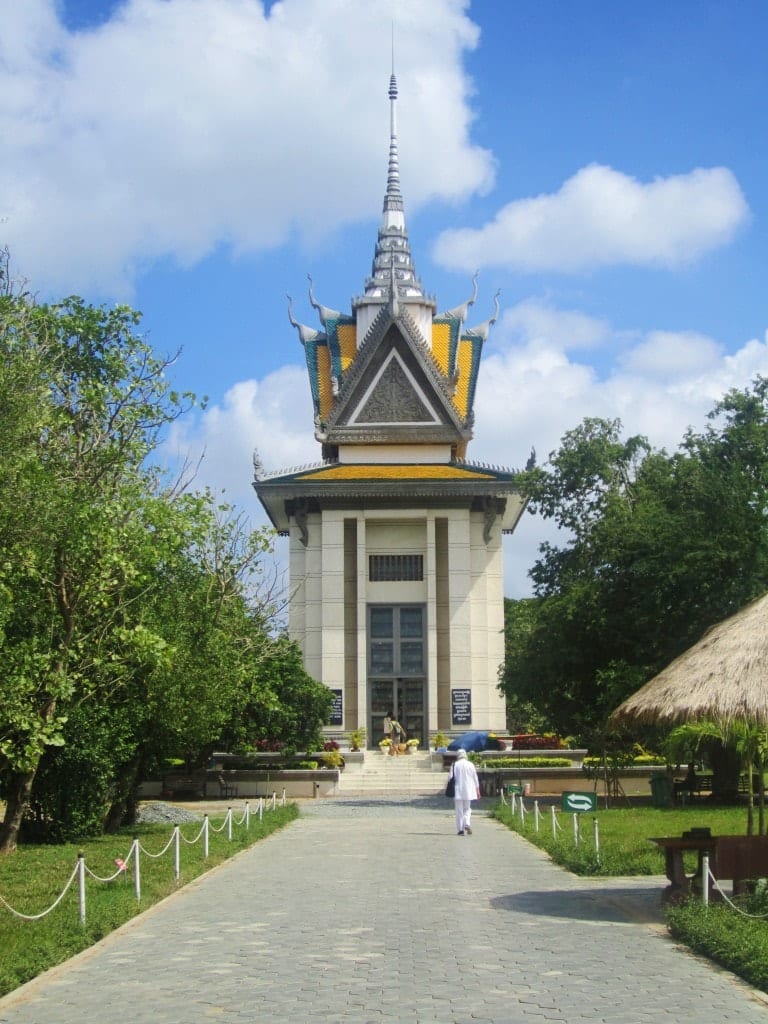 That tower pictured above looks beautiful, doesn’t it?  Naturally, I took a picture.

Zoom in and you’ll discover, as I later did, that it’s filled with human skulls.

Dark tourism. That’s a term given to the kind of tourism that covers concentration and death camps, war zones and sites of gruesome death, torture and degradation.  People often visit sites like these to indulge their inner voyeur.

The Killing Fields of Cheoung Ek absolutely fall into this category — but it is so incredibly important to visit them.  Only then will you begin to understand modern Cambodia.

The Khmer Rouge came to power in Cambodia in 1975.  Right away, they attempted to turn Cambodia into a peasant-run agrarian state unlike anywhere else in the world.  In reality, Cambodia became a slave camp.

Led by Pol Pot, the Khmer Rouge evacuated citizens from Phnom Penh and transferred them to the countryside, where everyone was expected to do excruciating work for 12+ hours each day.  There was little food, and disease swept through the country, killing hundreds of thousands.

That wasn’t all.  The Khmer Rouge killed anyone who stood in their way. Intellectuals and anyone with an education were particular targets of theirs.  People would be killed if they spoke another language.  People would even be killed for wearing glasses.

For four years, this hell endured. In 1979, the empty city of Phnom Penh was liberated by the Vietnamese.  But even after that, civil war and famine swept through the country.  The war didn’t end until the early 1990s.  Pol Pot died in 1998 and his second in command, Duch, was only sentenced for his war crimes in 2010.  2010!

The Killing Fields are the place where the Khmer Rouge killed and buried thousands of people.  Today it has been turned into a memorial and educational center. 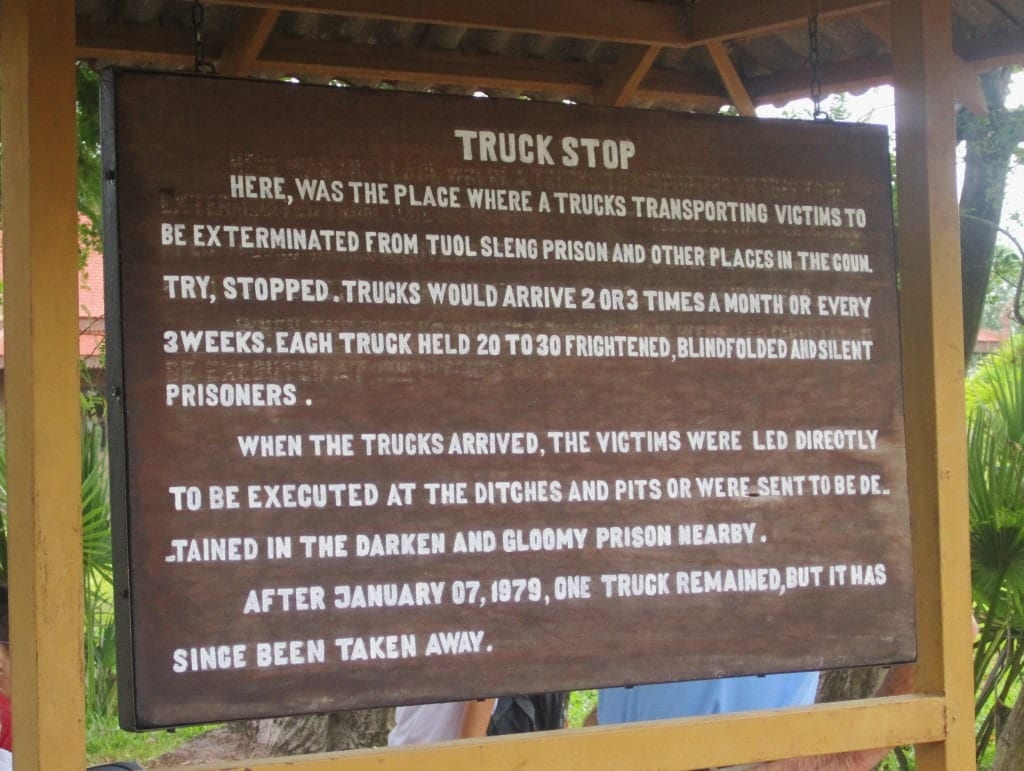 I visited the Killing Fields with a girl from Sweden whom I had met on the bus from Laos.  At first, the fields looked beautiful and peaceful, like a public park, and we chatted as we walked.  But as time went on, we grew silent, each fact we learned sickening us more than the last.

A tree was used for beating children against it.

A grave was found filled with the skeletons of women nestled up against their babies.

Bullets were considered valuable, so most people were bludgeoned to death.

Babies were killed by smashing their heads against rocks.

And as chilling and gruesome as it is to visit a destination like this, it’s a trip that every visitor to Cambodia must make.

Any Khmer over the age of 40 lived through this horror, survived this horror and has memories of this horror. 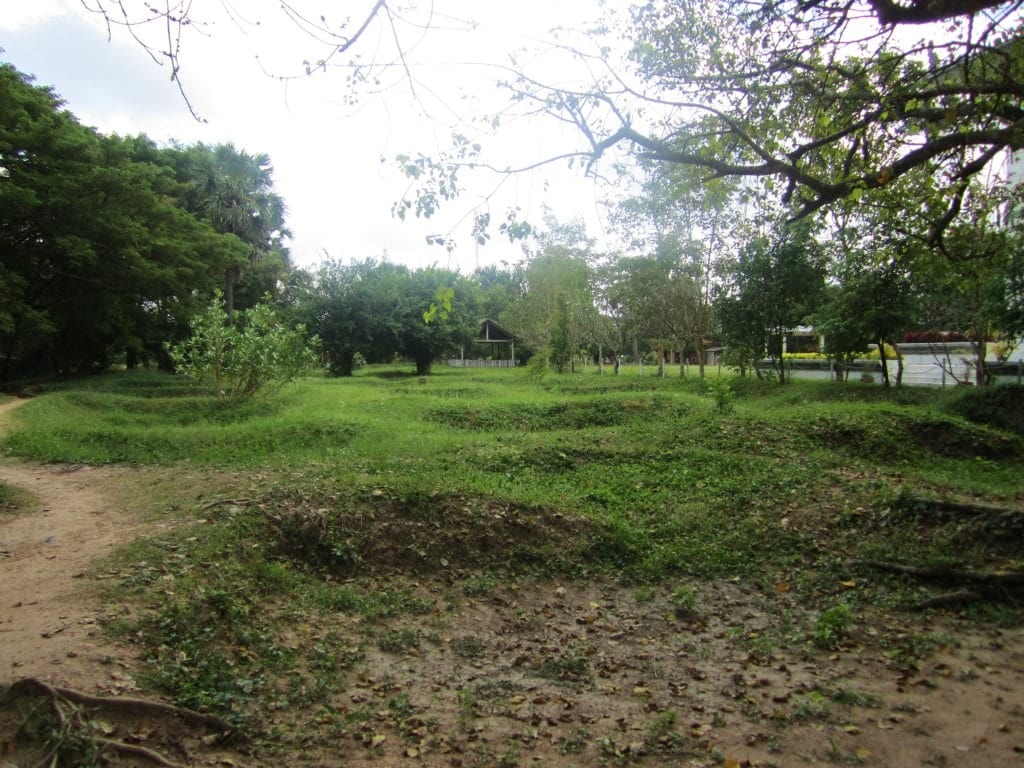 The Khmer Rouge’s legacy colors every aspect of life in Cambodia today. Before coming to power, Cambodia was far more developed than Thailand, Laos or Vietnam.  Today, Cambodia lags far behind the rest.

But it’s growing, and it’s getting better.  Tourism has been a saving grace for this country, giving them the means to rebuild.

The Khmer people, who are so kind and so generous and so friendly, have been to hell and back.  And the fact that they are here today is a testament to their powerful spirit.

45 thoughts on “You Must Visit The Killing Fields.”