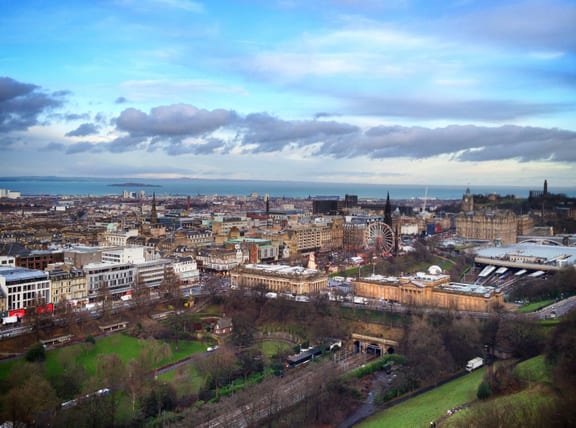 Looking back over the years, my New Year’s celebrations have been mostly low-key, largely unexceptional.  Oh, I’ve had some good ones — my Bangkok New Year’s was so much fun, and I’ve had a few memorable nights in Boston — but most of the time the night hasn’t lived up to the hype.  It’s hard to top anticipation like that.

My visits to Edinburgh, however — and there have been FIVE in the past fifteen months! — have always been exceptional.  There’s just something about Edinburgh that has drawn me back again and again.  I once told Kash that returning to Edinburgh felt like getting a hug by a good friend wearing a fuzzy sweater.  It’s familiar and comforting, yet you know you’re about to have an amazing time.

And in that vein, I gladly accepted an invitation to join #Blogmanay — a Hogmanay celebration for 21 travel bloggers.

On this trip, we experienced the best of Hogmanay — and the best of Edinburgh.  On our first evening, we got into it HARD, with deep-fried Mars Bars from Bene’s Chip Shop on the Royal Mile.  They claim to have invented the calorie-laden treats, which each cost two pounds and will likely make you gain far more than that.

Amanda and I — and later Dan — finished them off in about 10 seconds.

And with that, we were off to explore the city as we saw fit.

I found myself doing things I had never done before in Edinburgh: visiting Camera Obscura, five floors of optical illusions and visual delights, like the dizzying maze of mirrors. 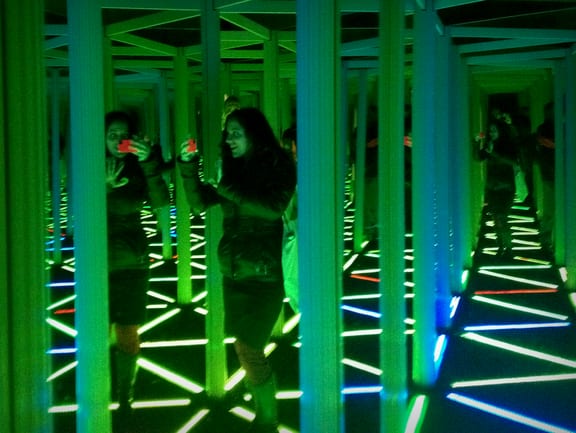 And actually visiting the inside of Edinburgh Castle, not just photographing it from every angle. 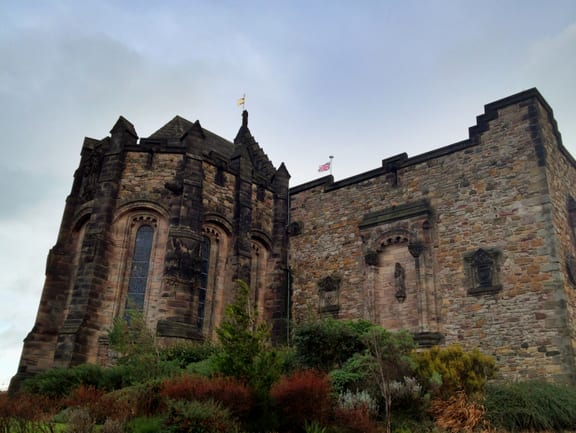 Though I did get my favorite pics of the castle yet, taken from the rooftop deck of Camera Obscura. 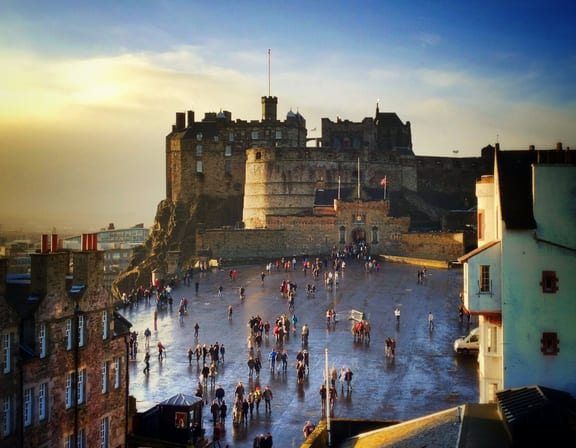 Soon, New Year’s Eve was upon yes.  Those who dared to bare their legs in the freezing cold got kilted up in style! 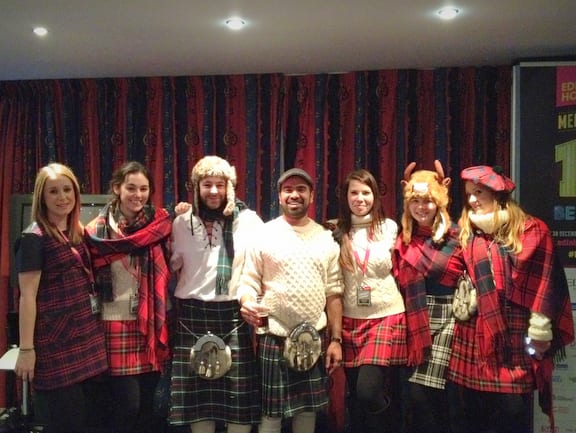 And because I know you’re dying to know — were the men outfitted…traditionally?  Underneath their kilts, so to speak?

All I will say is that there are some things you can never unsee. 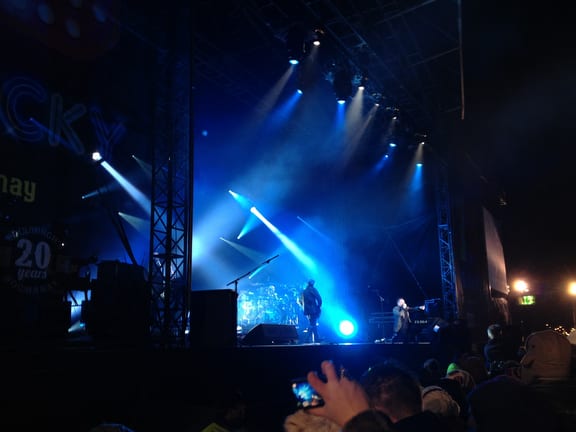 With that, we were off to the ceilidh, or Scottish dance hall.  The street party on Princes Street was already in full force.  While it was hard to break into the dancing crowd, a Scotsman grabbed my arm and I joined in a dance I actually remembered from the Up Helly Aa afterparty last year!

Next, we made our way to the main event — the concert.  Performing this year?  Simple Minds.  Also known as the guys who sang the “Don’t You Forget About Me” song from The Breakfast Club.  While I can count the number of concerts I’ve been to on one hand (I know, it’s weird, but concerts are just not my thing!), they did put on a great show!

On each hour, the city illuminated with fireworks, shot up from the sides of Edinburgh Castle. 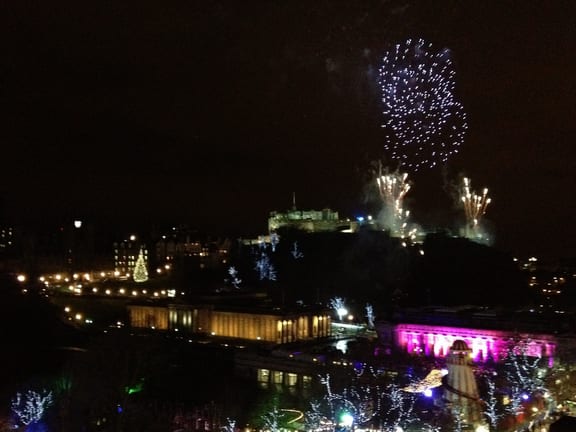 And soon enough it was midnight, the sky filling with purple fireworks explosions.  Arm in arm, our group belted out Auld Lang Syne, craning our necks to make sure we got all the lyrics:

A new year.  A fresh start.  A brand new opportunity to go after all our dreams.

And the next morning, we brought in the New Year in a myriad of ways — cuddling with the huskies at Dogmanay, seeing more of the sights of Edinburgh, watching the Big Bang light show in the street, or, as three absolutely nuts ladies did, jumping in the ocean for the Loony Dook. 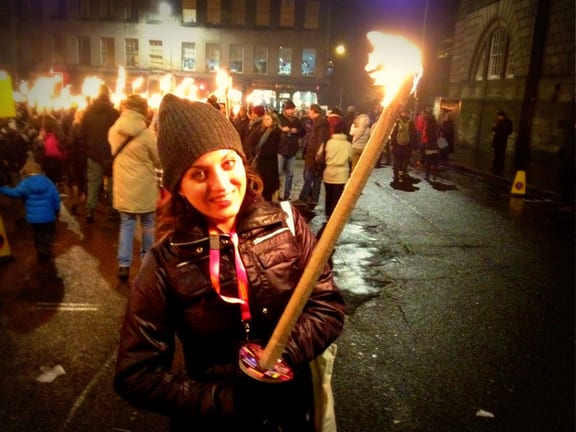 The best part of Hogmanay, however, is what I left for last — though it happened first, on the evening of the 30th.  The night before New Year’s Eve, Edinburgh has a torchlight procession.  People light torches and walk through the streets and up Carlton Hill, where the procession finishes with fireworks.

Despite the fact that more than 7,000 people was holding fiery torches in their hands (yet another thing that would never happen in America, I thought to myself), it was one of the most peaceful experiences I’ve ever had while traveling.

We simply strolled the streets, following those in front of us.  Over time, I allowed myself to fall silent and let my mind go clear, simply being swept along by the crowd.  This New Year’s celebration was a revelation — it wasn’t about drinking or partying or spending too much money for a mediocre meal or an overcrowded nightclub.

It was about camaraderie. 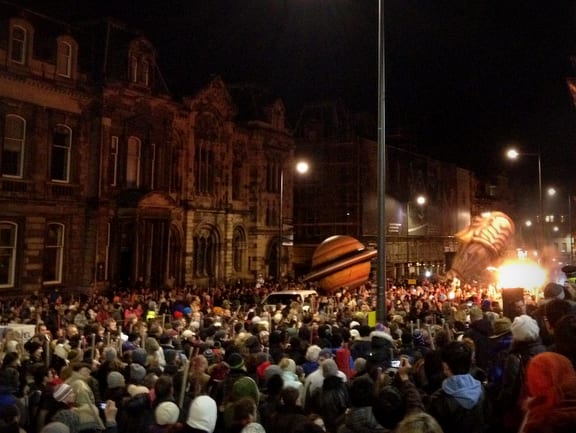 It was about friendship. 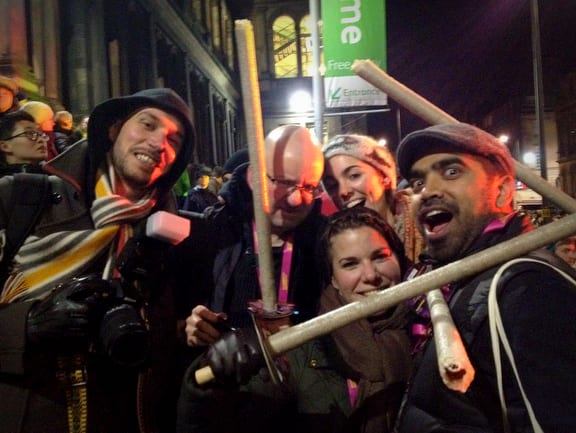 It was about being part of something larger than yourself. 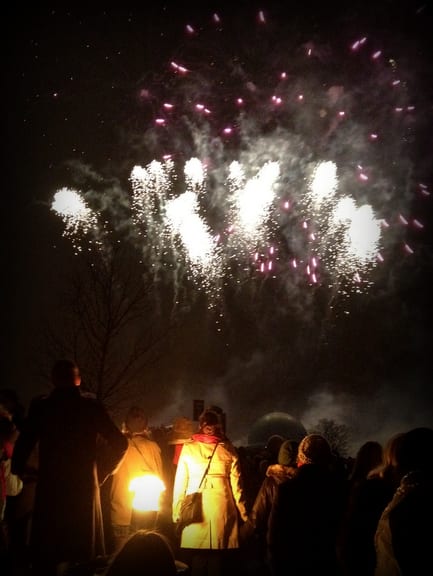 Hogmanay is one of the truly unique New Year’s celebrations of the world, and I can’t recommend it enough.  Forget about putting it on your bucket list — you know how I feel about them — start planning your trip to Edinburgh for New Year’s Eve 2013!

This campaign is brought to you by Edinburgh’s Hogmanay and is sponsored by Visit Scotland, ETAG, Edinburgh Festivals, Haggis Adventures and Skyscanner. The campaign bloggers were sourced and managed by iambassador.  All opinions, as always, are my own.

14 thoughts on “Hogmanay: Bringing in the New Year in Edinburgh”