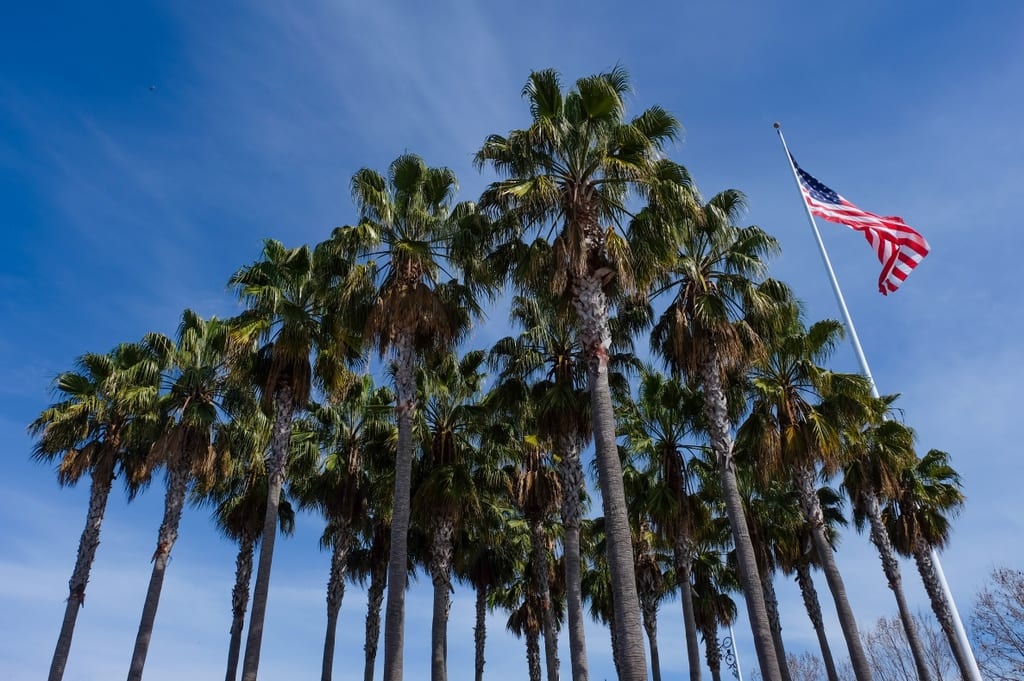 It took three visits to San Francisco before I finally made it over the bridge to Oakland. Did I like it? Absolutely! It’s a great city with fantastic food.

But what I found most interesting in Oakland was how different the narrative felt. Go to most major cities in the U.S., learn about their history, and they’ll give you a cast of white players telling white stories, with people of color added mostly as afterthoughts.

Oakland is one of the few U.S. cities I’ve visited that doesn’t have a white narrative. It’s an incredibly diverse city — today it’s almost evenly divided between whites, blacks, and Hispanics with a sizable Asian population as well. Beyond that, it’s a city where the interaction is diverse (unlike somewhere like Boston, which is diverse on paper but is surprisingly segregated even today).

This reverberated again and again as I chatted with small business owners, talked to local activists at an event for women of color, and explored the history of Oakland as a city. 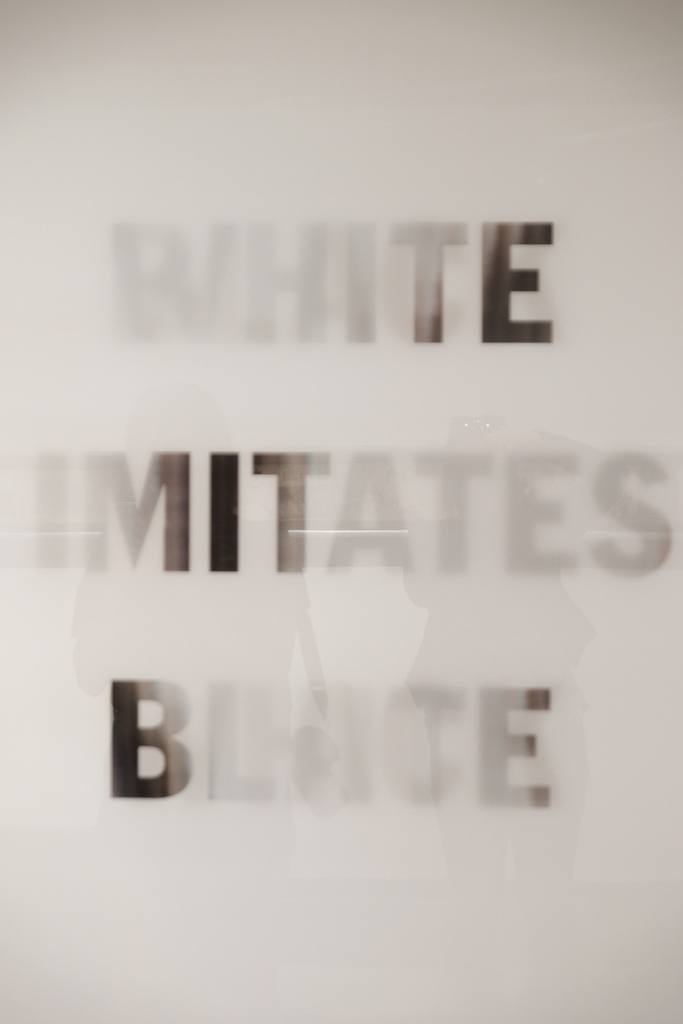 Nowhere exemplified this more than the excellent Oakland Museum of California, which I absolutely loved.

In many ways, California is like a microcosm of the United States. It’s built on immigrants, as well as American transplants from further east, and it has similar demographics to the country as a whole.

The Oakland Museum of California focuses on telling stories about Californians: the Japanese-Americans who survived internment camps, the immigrants from Latin America who came searching for a better life, and Oakland’s black social justice warriors, including the Black Panthers. These stories are put front and center.

Front and center. Not relegated to an “ethnic corner” like so many museums today. 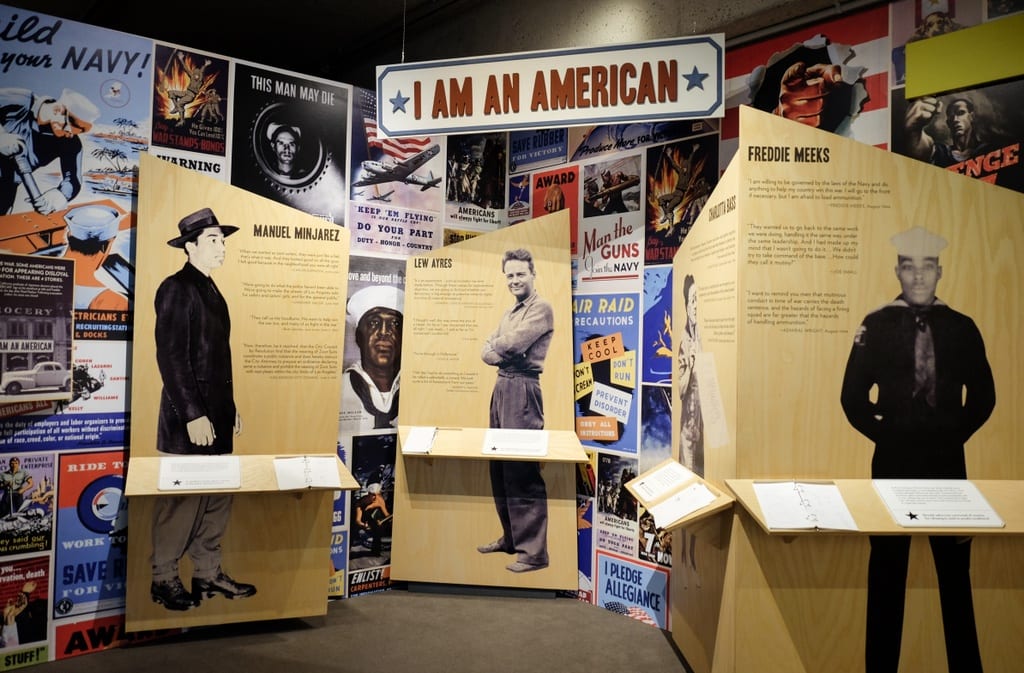 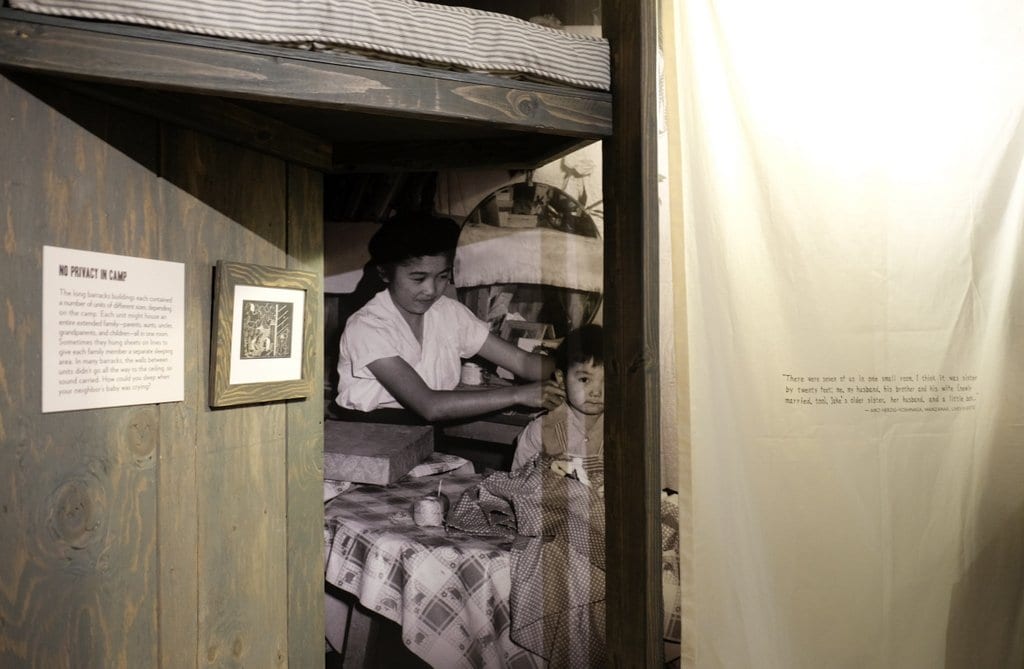 There was even a news section on Donald Trump’s statements about banning Muslims from the United States and how this related to the Japanese internment camps.

My favorite sections were where people could write their own memories, hopes, and dreams on post-its. Most people had thoughtful things to say. 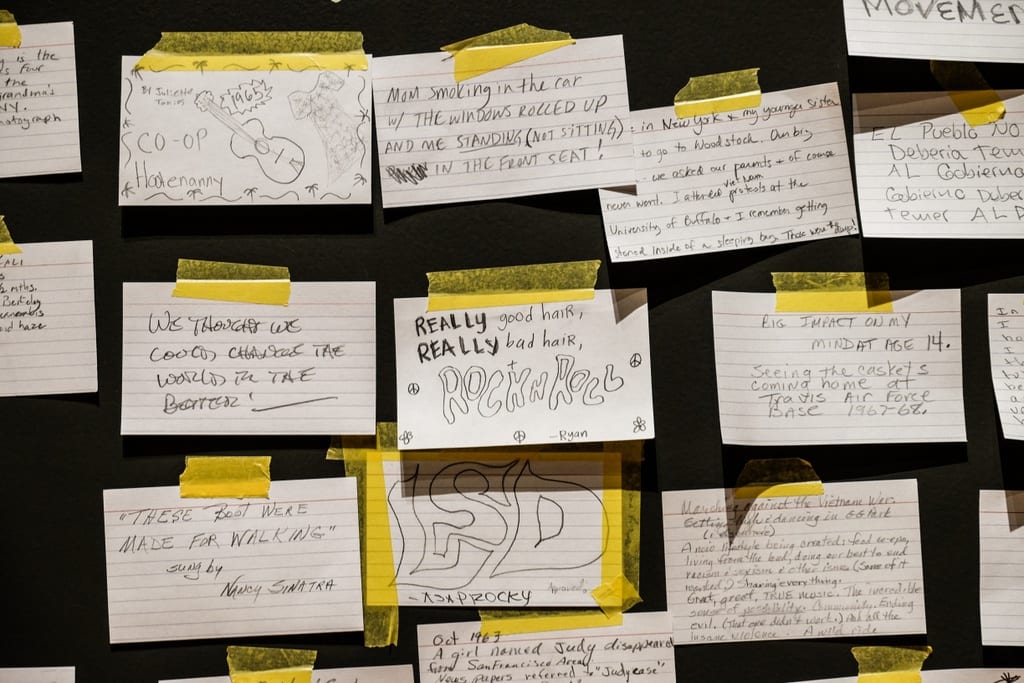 What do you remember about the 60s and early 70s?

“Mom smoking in the car with the windows rolled up and me standing (not sitting) in the front seat!”

“Not being able to rent an apartment when they saw us as Mexican.” 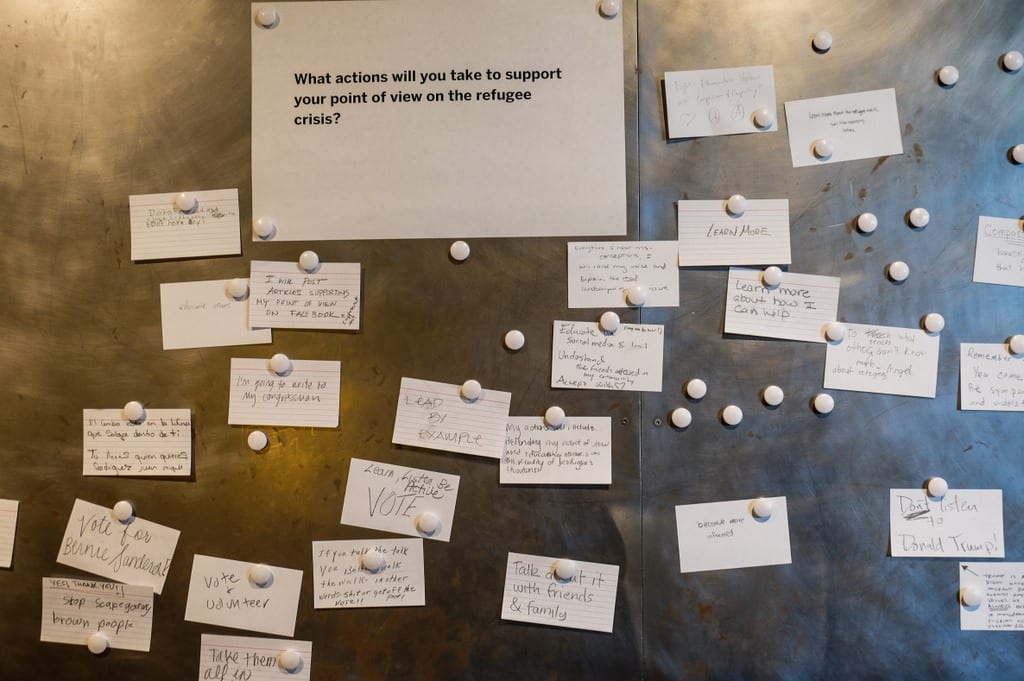 What actions will you take to support your point of view on the refugee crisis?

“Every time I hear misconceptions, I will raise my voice and explain the real landscape of an issue.”

“Learn more about how I can help.” 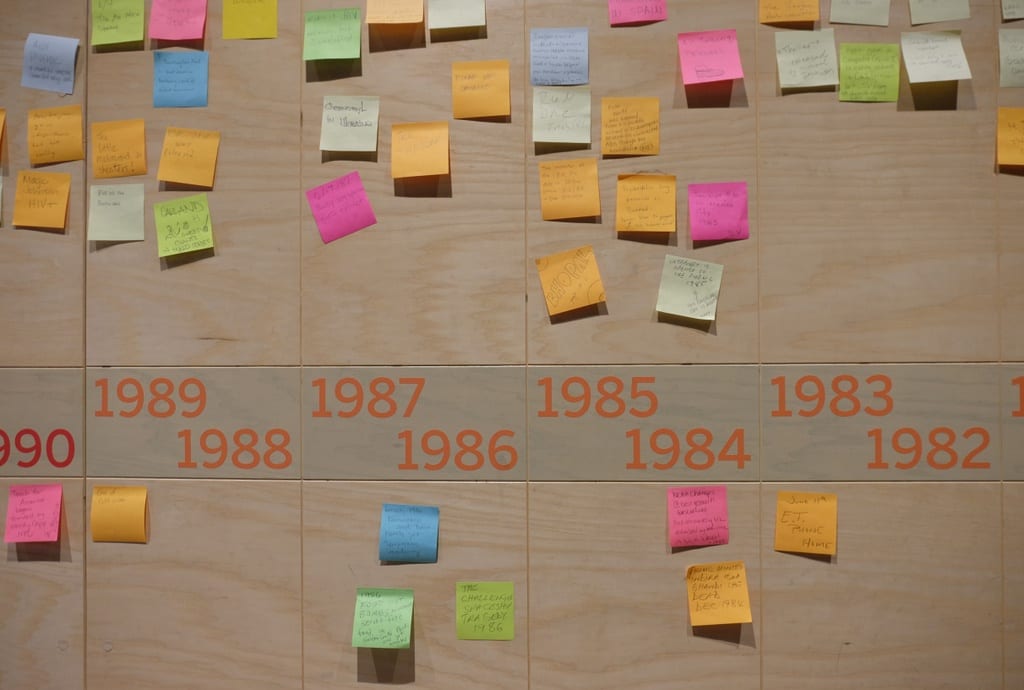 What do you hope for the future?

2019: “Transgender people will have equal rights.” “TIBET WILL BE FREE.”

As you can see, as a lifelong liberal, I was in heaven at this museum. And the sections on art, history, and ecology of California were fascinating as well. Oh, and I should probably mention that there’s a marijuana exhibit coming soon… 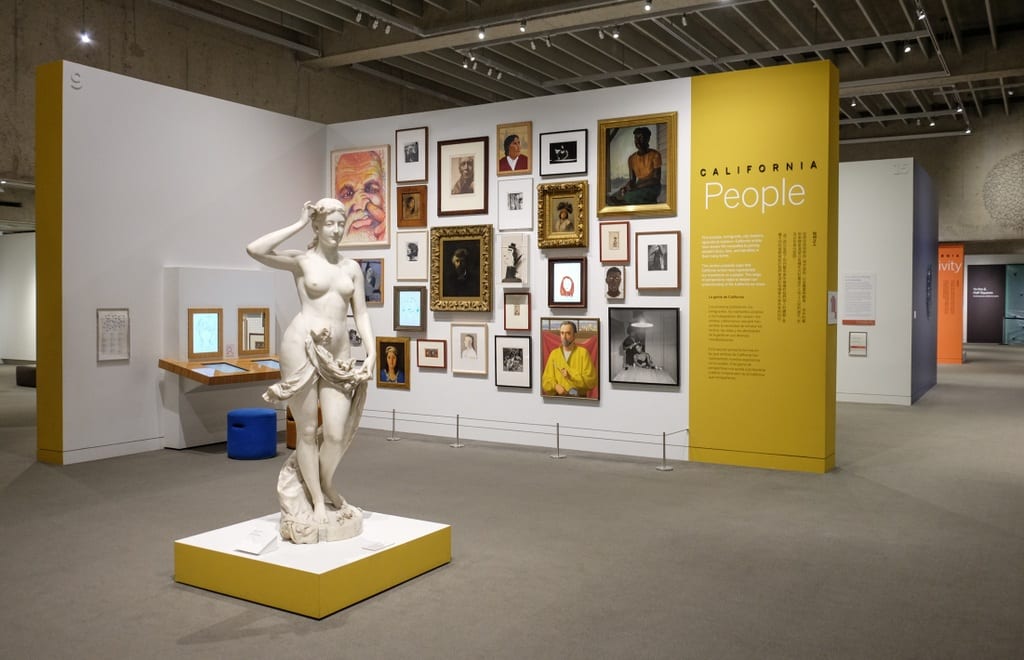 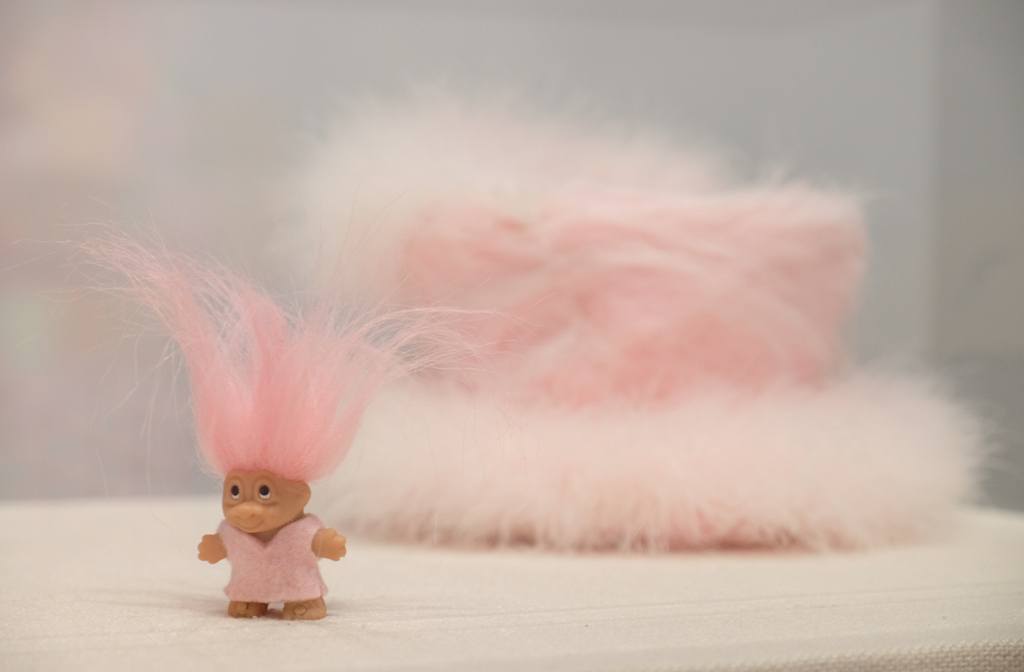 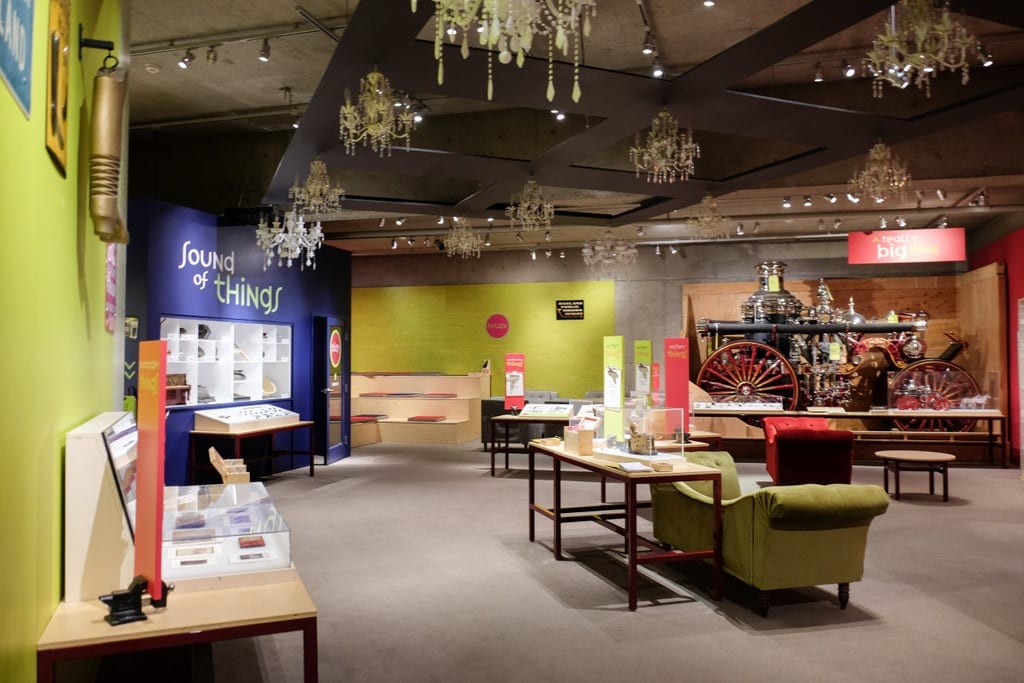 On Friday nights, the museum has half priced admission and the open area turns into a giant party for all ages! There are food trucks, drinks, and music.

And what I loved most is that the music of choice was hip-hop — and yet you saw families dancing with kids of all ages.

I don’t think I have EVER seen families with kids dancing to hip-hop at a museum event. Ever. It made me so happy to be in a city where hip-hop is considered family-friendly! 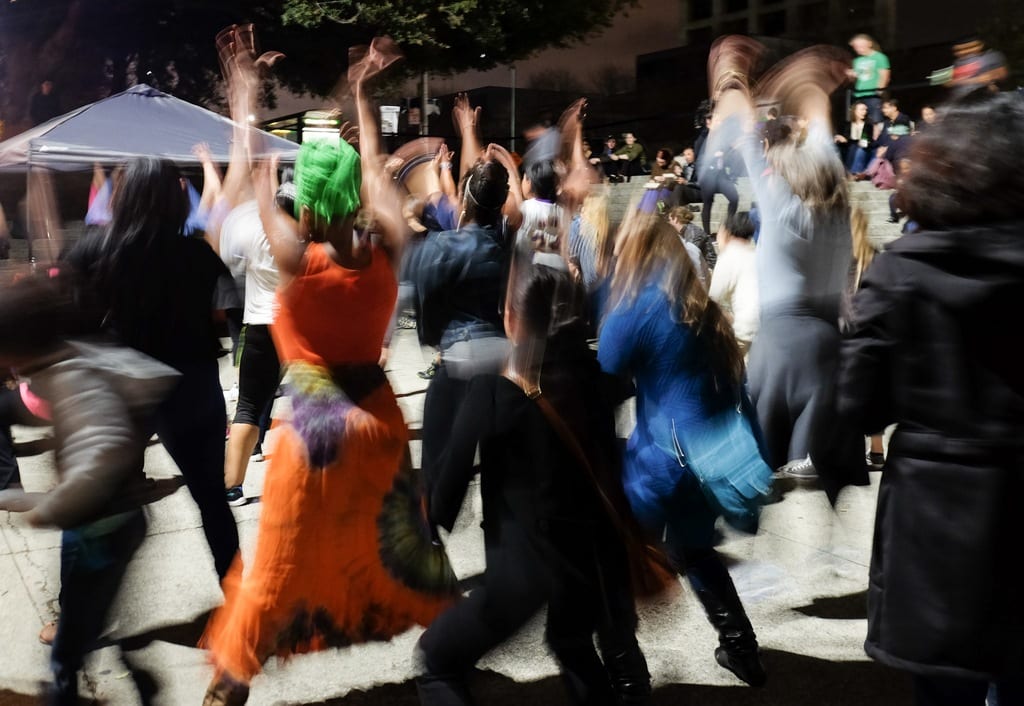 After the hip-hop ended, the music shifted to Latin dance — and the musician turned into a giant zumba session!

Oh, and the food scene is Oakland is crazy. In the best way. I previously wrote about the best things I ate in California, but here are a few other Oakland treats I loved: 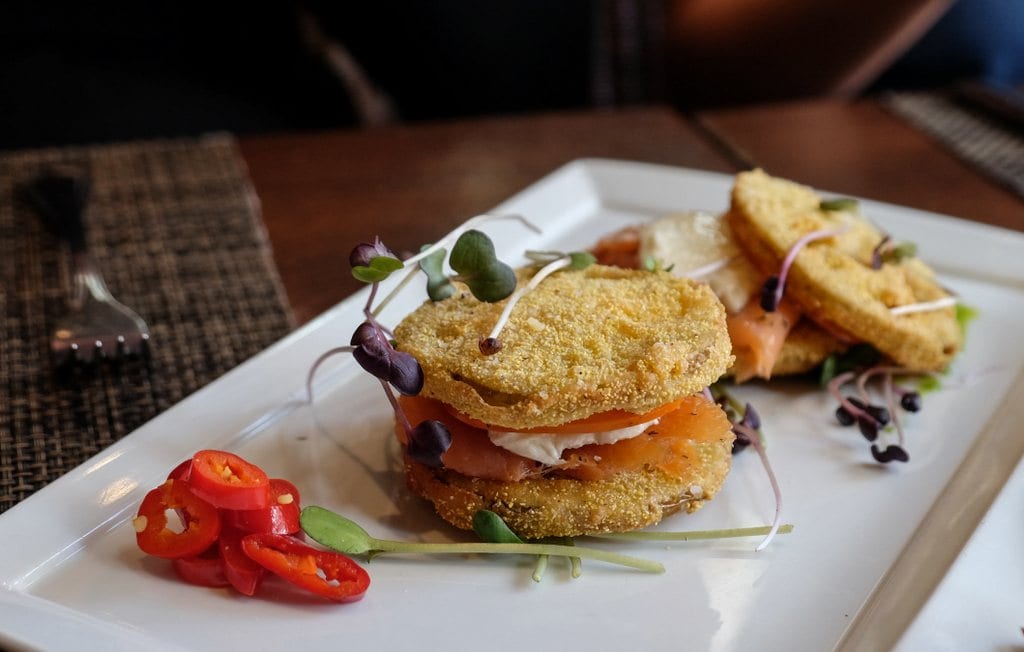 Fried green tomatoes with hollandaise and smoked salmon at Picán. 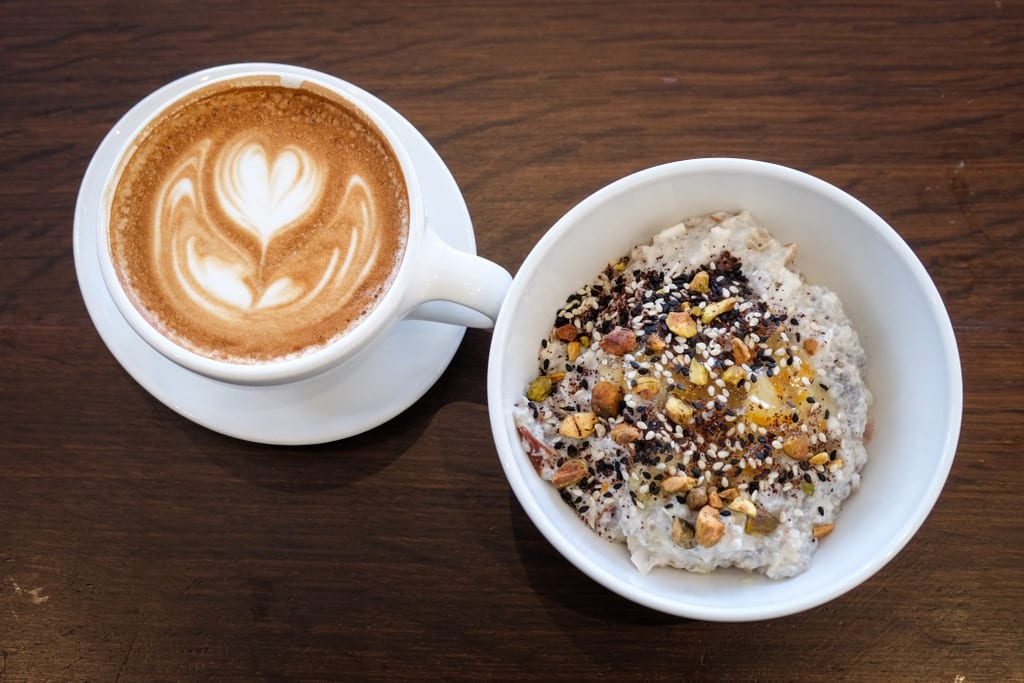 Great coffee and a chia pudding at Blue Bottle Coffee. 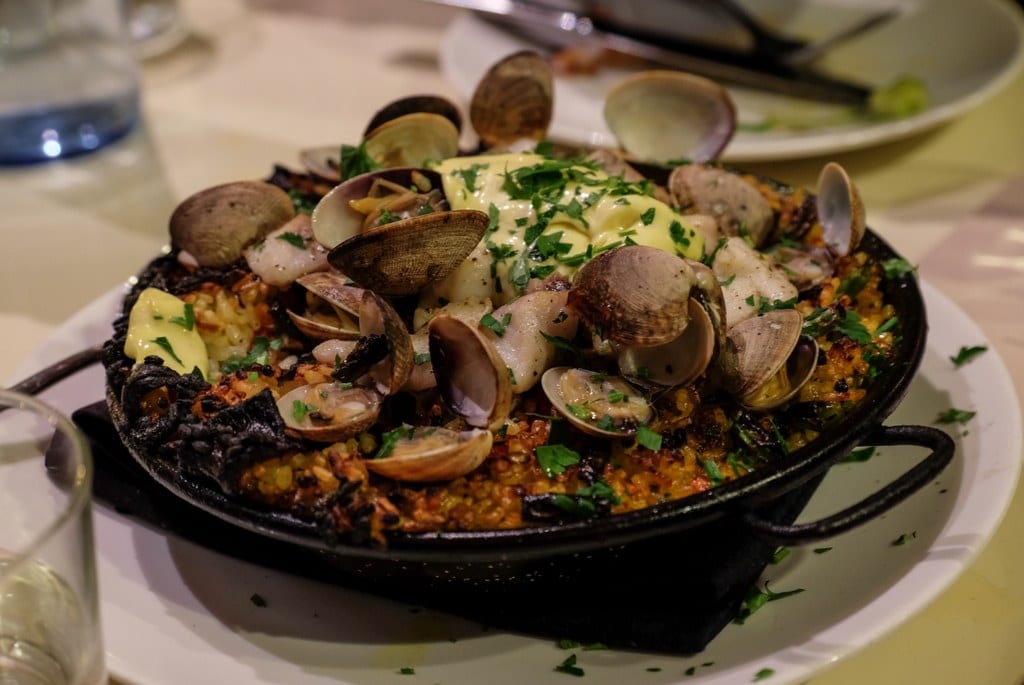 This bowl of rice and clams at Shakewell. 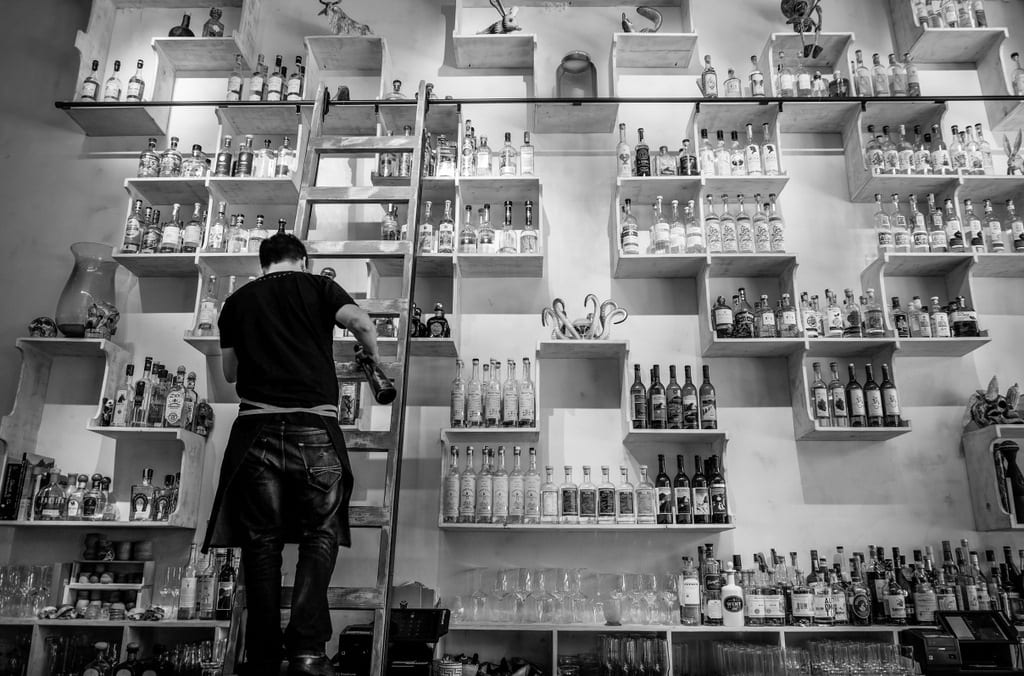 Tequila doesn’t always have to be in the form of “bad decision” shots — check out the amazing tequila selection at Calavera! The salt cloud margarita is amazing. 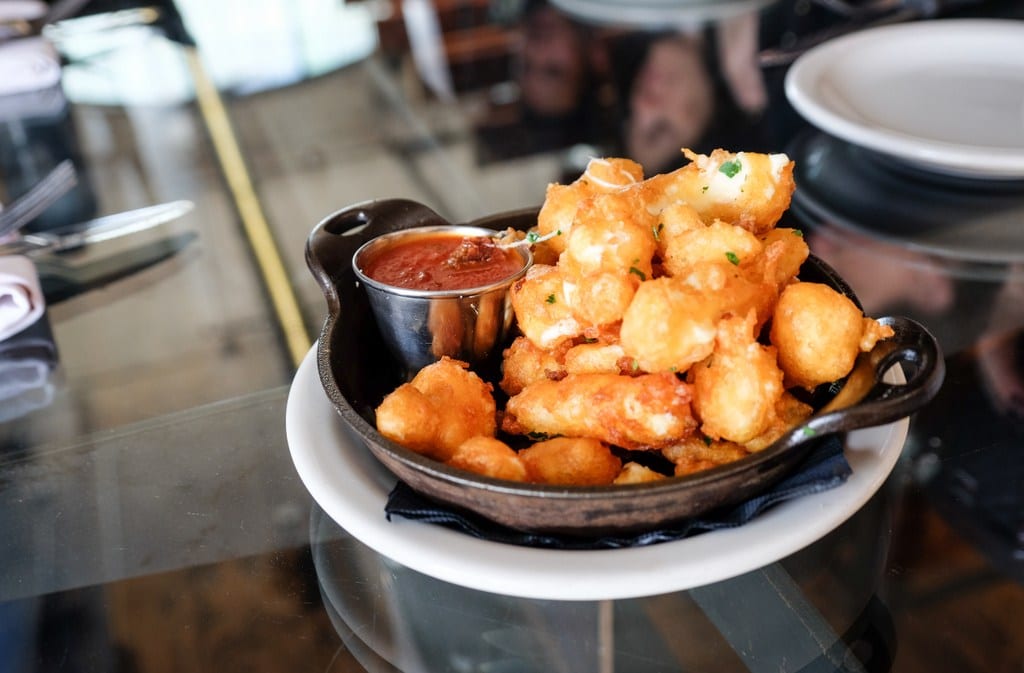 Deep fried cheese curds on a Savor Oakland Food Tour. Some of the staff are longtime Adventurous Kate readers; be sure to tell them I sent you! 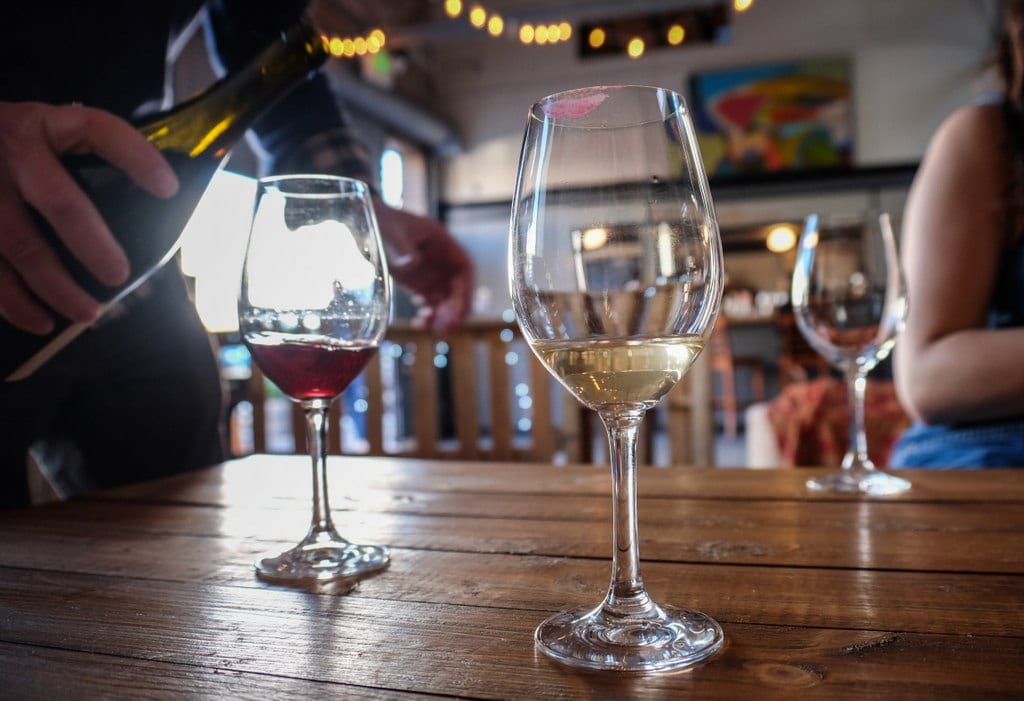 Oakland has an urban wine trail and you can do wine tasting all over the city. I particularly enjoyed the wines, meats, and cheeses at a place called Campovida. 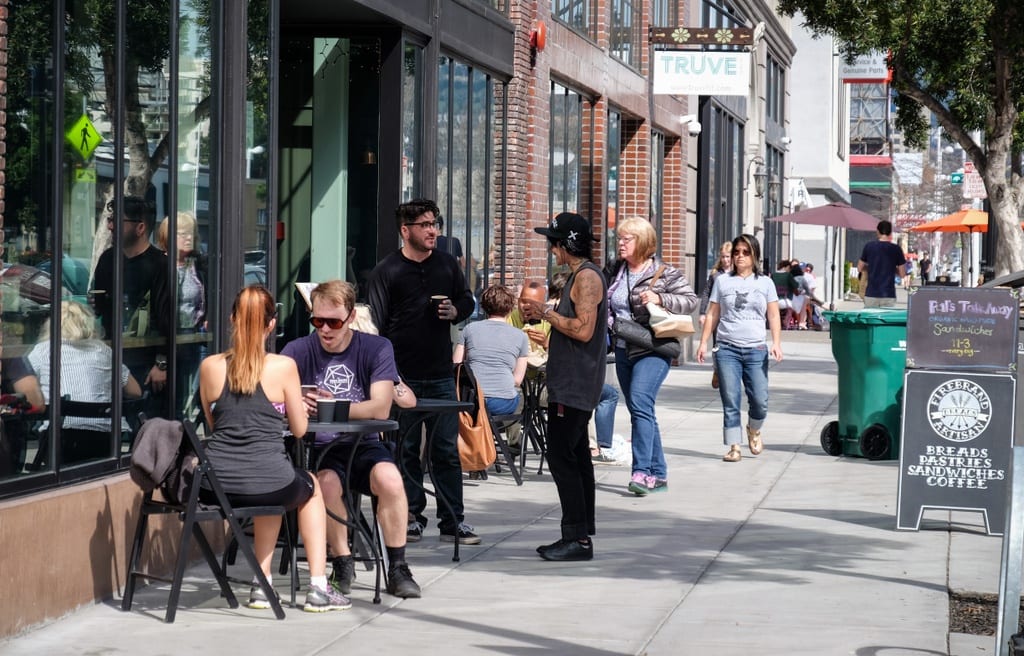 It’s not easy to get to know a city in just two days — even harder when you’re on an organized press trip where the point is exploring the culinary scene. But what I discovered in Oakland was intriguing enough that I’m eager to return and peel back more of its urban layers.

If you’re planning a trip to San Francisco, I highly recommend you set aside a day for Oakland, if only to go to the Oakland Museum of California and get an awesome lunch or dinner. It’s so different from San Francisco and well worth your time!

Essential Info: In Oakland I stayed at the Oakland City Center Marriott, which was in a convenient location and got the job done. Pretty standard, not too exciting, but very comfortable. Ask for a room with a view of San Francisco. Doubles from $189. Find more hotels in Oakland here.

Admission to the Oakland Museum of California is $15.95 for adults, $10.95 for seniors and students, $6.95 for ages 9-17, and free for children 8 and under. Prices are half off on Friday nights, 5-9 PM, which is when the museum also celebrates Friday Nights at OMCA.

The best way to get around Oakland (and San Francisco) is to use a combination of public transit and Uber. (New to Uber? Get a free ride up to $15 with the promo code 9x41m.) Public transit is good in some neighborhoods but poor in others, and Uber will save you a lot of headaches.

I was hosted in California as part of a campaign with Visit California. All opinions, as always, are my own.

Have you been to Oakland? What did you think?

31 thoughts on “In Oakland, A Different Narrative”