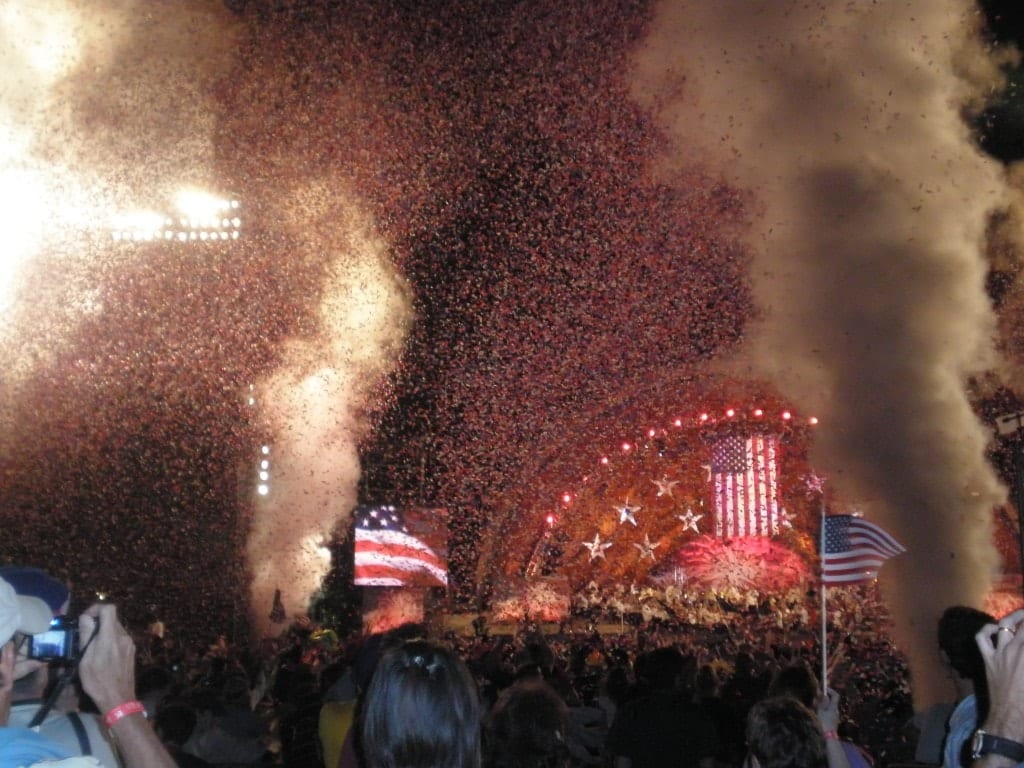 There’s no question about it: Boston is the best place in American to celebrate the Fourth of July.  Boston is home to one of the most famous celebrations in the country: Pops Goes the Fourth, featuring the Boston Pops in concert, followed by some amazing fireworks.

As a Bostonian, I’ve done the concert, I’ve done the fireworks, and I can tell you this: you need to prepare in advance.  Here is my complete guide to July 4th in Boston!

You can go to the concert, or you can go see the fireworks.  You can’t do both.

The Esplanade is surrounded by trees, which makes viewing the fireworks impossible.

Know this early on and you can make the right decision.

Most importantly: get there early.  The concert doesn’t begin until 8:30 PM, but you’ll want to get there by 10:00 AM at the very latest to secure a spot with a view of the Hatch Shell.  The gates open at 9:00 AM, but people line up at the crack of dawn.

Upon arrival, you’ll receive a wristband that will allow you to come and go over the course of the day.  Again, get there early to make sure you get one.

You’ll be there for the next thirteen hours, so be sure to bring a hefty picnic (the food selection on the Esplanade is fine but not anything to sing about).  Bring umbrellas (no matter what the forecast), sunscreen, clothing for all types of weather, and enough entertainment to occupy you for the day.  At the very least, bring a deck of cards! 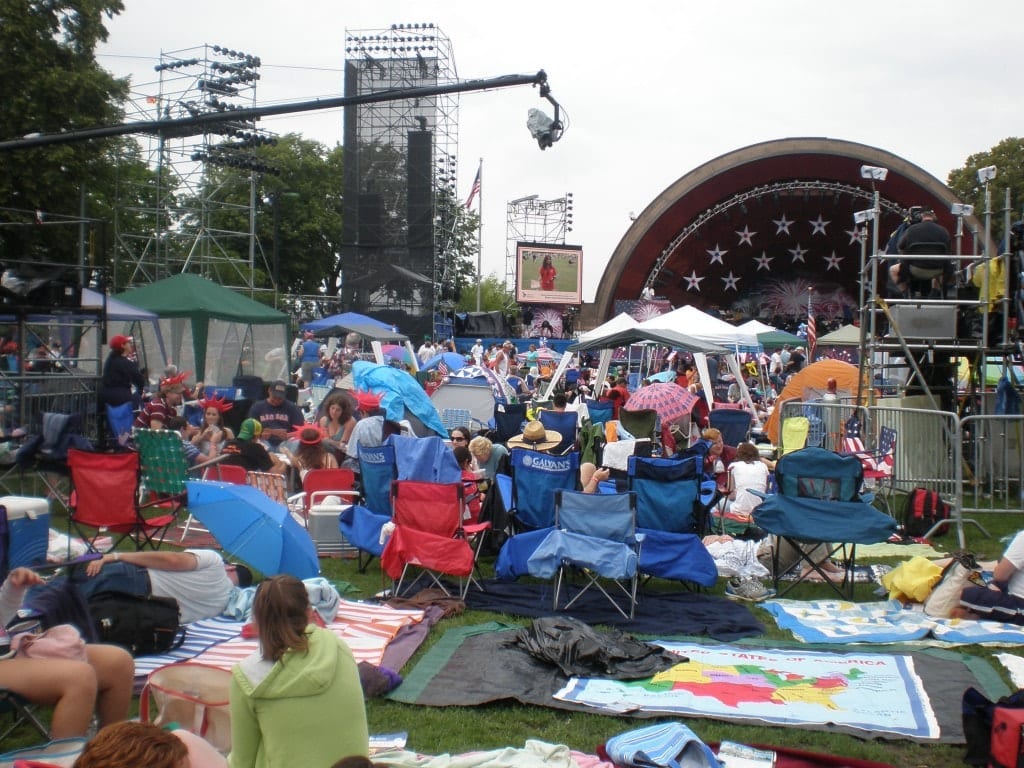 Alcohol is not permitted.  In fact, no open containers are permitted, and security will check to make sure all water bottles are sealed.  (That doesn’t mean that sneaking in vast quantities of booze is impossible.  Be creative.)

Porta-potties are the only bathrooms available.  If porta-potties skeeve you out, you’ll have to leave the Esplanade and find a Starbucks.  Keep in mind that lots of people will be doing the same thing and the lines will be incredibly long.

If you’re a fan of the featured concert performer, don’t worry about getting a seat up close.  Everyone rushes to the front of the stage anyway.

One last option: there is a Boston Pops rehearsal concert on July 3rd at 8:30 PM.  The featured performer won’t be there, but you’ll hear the full Pops concert! 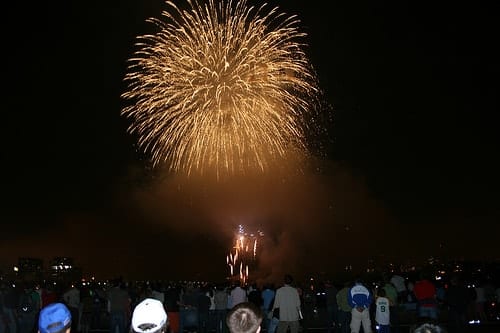 Where to Watch the Fireworks in Boston

If you have access to either of the following, congratulations.  You’ve found your July 4th plans.

Now, most of us don’t have access to either.  Here are the next best options:

The Bridges. The Harvard Bridge (also known as the Massachusetts Ave. Bridge), Longfellow Bridge and BU Bridge each provide breathtaking views of the fireworks.  The Harvard Bridge is the best of the three.  You’ll need to find a spot several hours in advance, however.

Storrow Drive. This one is more of a gamble.  Storrow Drive, running along the river on the Boston side, is closed on the Fourth of July, and there are lots of spots to see the fireworks.  However, there are quite a few trees, and to get a prime spot, you’ll need to get there at least two hours early.  If you get there later, look for gaps in the trees where the fireworks will poke through.

Memorial Drive. This road runs along the Charles River on the Cambridge side, and on the night of the Fourth, it turns into a family-friendly park with games, food stands, light-up toys and more.  Even if you arrive at Memorial Drive shortly before the fireworks begin, you’ll be able to see them.

Project Best Idea Ever. These smart Boston entrepreneurs have thrown parties in the middle of the Charles River in inflatable boats.  Food and beverages are included, making this a floating party! 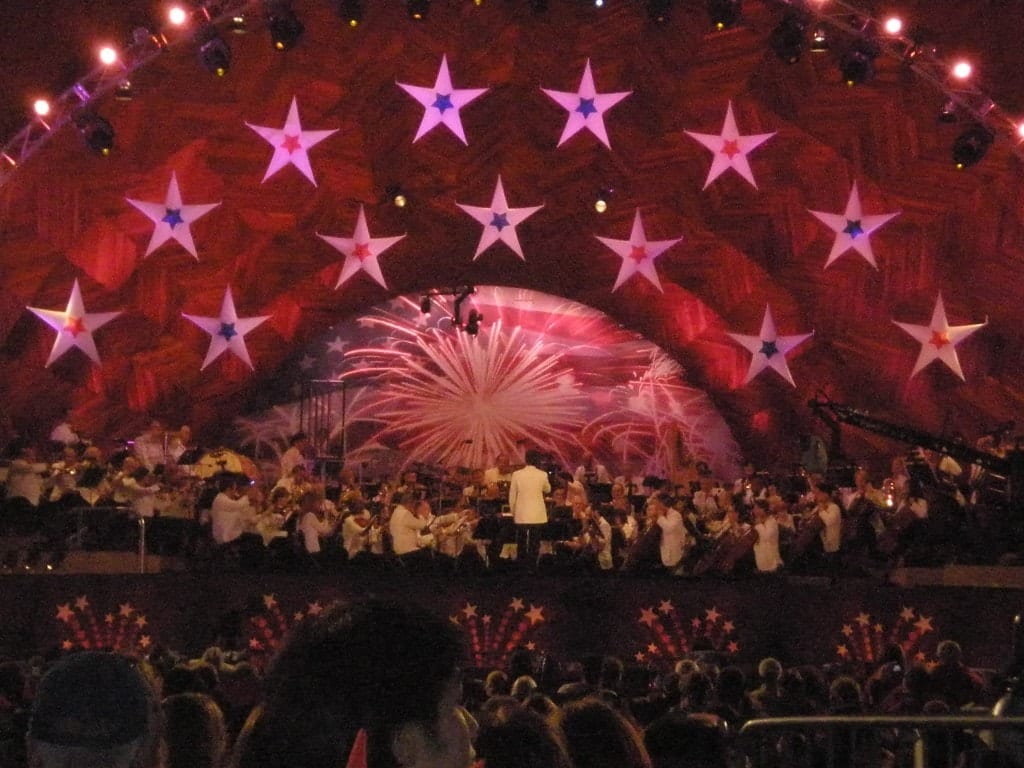 Other Fourth of July Advice

Where to Stay in Boston: Best Neighborhoods and Accommodation

40+ Things To Do In Boston At Night