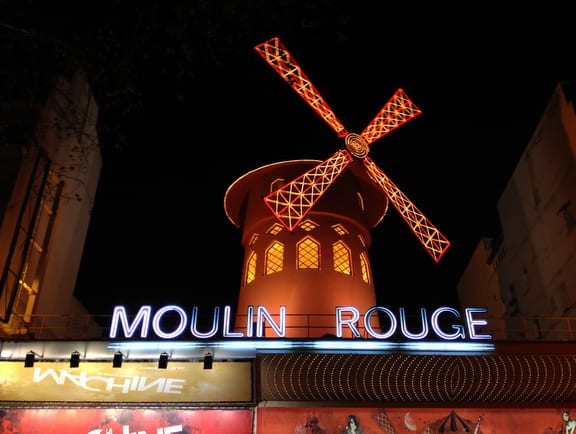 When I was 17, I saw the movie that would become my obsession for the next year — a tale of romance and deception, a light-hearted comedy slowly descending into tragedy, filled with zany music and wild and colorful costumes, bearing one message: The greatest thing you’ll ever learn is just to love and be loved in return. 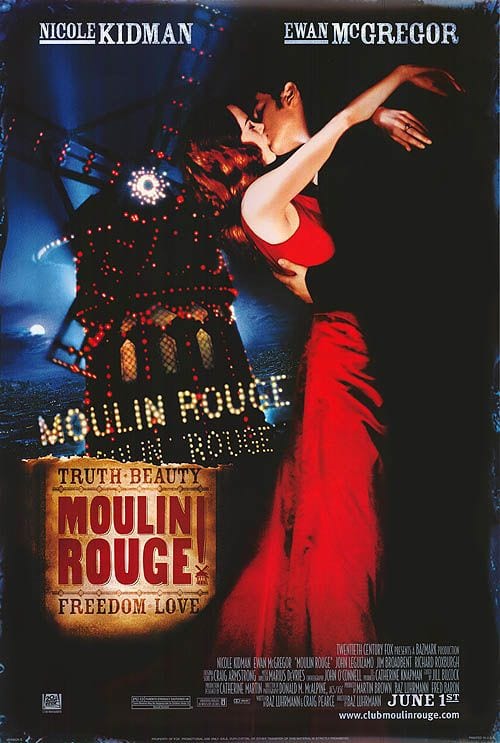 I played the soundtrack nonstop.  I danced to the “Like a Virgin” scene with my friend’s little cousins, hoping they didn’t get the meaning of the song.  Moulin Rouge and Paris at sunset were the decoration themes in my first college dorm, and dreamed of the day I would return to Montmartre and see the Moulin Rouge for myself.

And for 11 years, I never made it.  Until the perfect opportunity presented itself.

“What do you want to do for your birthday?” I asked my boyfriend, Mario.

“Go to Paris, go up the Eiffel Tower, and go to the Moulin Rouge,” he replied without missing a beat.

Excellent.  I would make that happen. 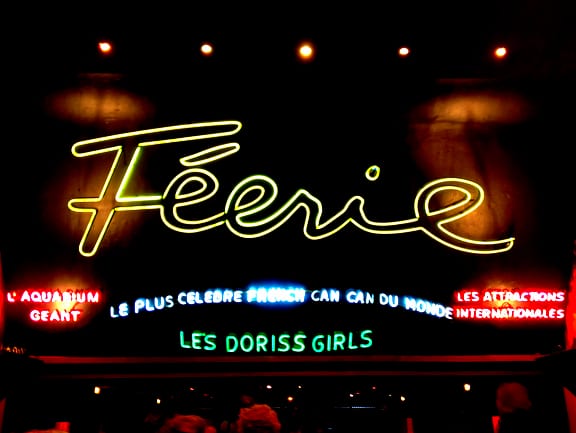 Soon, however, I learned that booking tickets to the Moulin Rouge can often be a challenge, and the shows on Mario’s birthday were already sold out — so I turned to GetYourGuide.

GetYourGuide is a site that offers activities, tours, and fun things to do all over the world, all of them easily bookable from the site.  I met their representatives at TBU in Innsbruck last year and was very impressed with what they had to offer.

Want to take a cooking class in the Tuscan countryside?  You can do that with GetYourGuide.  You can also see the Grand Canyon from a helicopter while drinking champagne outside Las Vegas or go on the Sex and the City tour in New York.  The sheer variety of activities they have is stunning, and I recommend taking a look wherever you book your next trip.

And, naturally, they had a Dinner and Show at the Moulin Rouge package on offer! 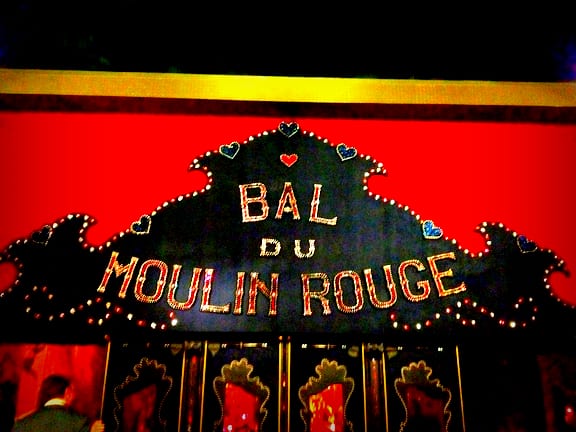 The Moulin Rouge truly is an experience from beginning to end.  We were picked up from our hotel by a lovely driver who showed us his personal take on Paris.

After a short wait in line, we were shown to our seats in the elegant ballroom — and to our great delight, we were seated in THE FRONT ROW!  GetYourGuide made no mention of that! 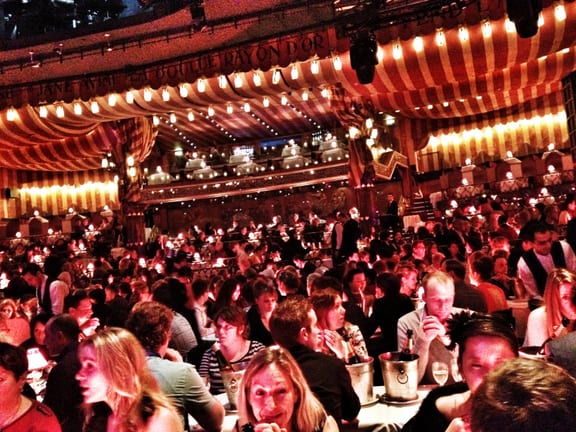 First up is the three-course meal.  There were a few different choices and I had foie gras, followed by salmon poached in butter, finishing with a “tendresse” of red raspberries — a lovely cakelike concoction.  The menu included a bottle of champagne to share.

During dinner was the first round of entertainment — two cabaret singers who were delightful imports from the lounge days of the 1980s, one of them rocking Lionel Richie’s hairstyle from the “Hello” music video.

After dinner, there was time for dancing.  (This also made for entertaining people-watching — a sixty-something couple dominated the dance floor with a wild cha-cha, and a woman danced with her 10-year-old son by squishing his face into her cleavage.) 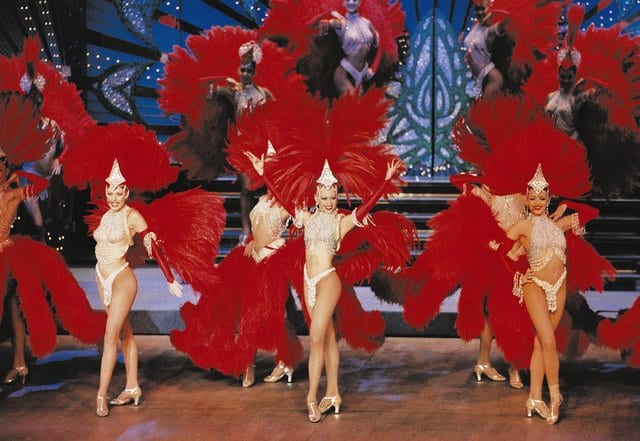 We were then seated to watch the show.  As much as I’d dreamed of visiting the Moulin Rouge, I hadn’t given much thought to the show itself, other than there being great dancing, gorgeous costumes, and lots of boobs.

The Moulin Rouge blew me away.  It was SO much more than I ever thought it would be.  The dancing was incredible.  The costumes were absolutely sensational, especially one set of 1920s-inspired costumes complete with giant Derby-style hats.  The boobs were universally tiny and lovely.  (I mean, come on — who doesn’t love boobs?)

After a few dances, the front stage disappeared — and a giant water tank rose up in its place.  The tank was filled with LIVE SNAKES.  BIG SNAKES.  BOA CONSTRICTORS.  And then a woman wearing nothing but a flesh-colored thong dove in the middle of the water and swam with the snakes, winding them around her body and hoisting them up in the air.

There wasn’t a single person in the ballroom that didn’t have his or her jaw hanging open. 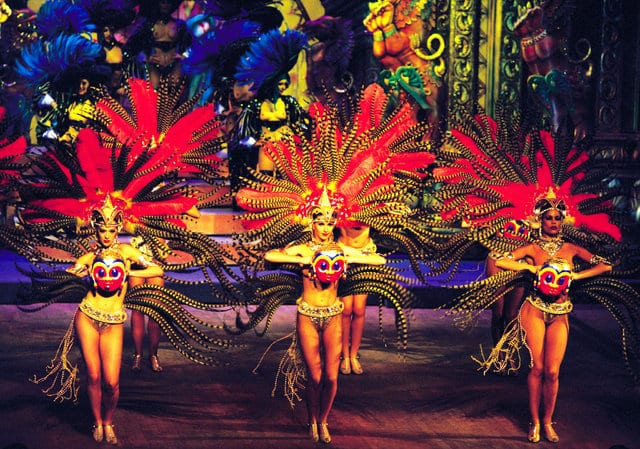 Additionally, in between the dancing, there were different kinds of entertainment.  The world’s fastest juggler performed, spinning seven pins at a spellbinding rate.  Two acrobats performed some wild feats.  A comedian acted out a skit and invited audience members to take part on stage.

The Féerie show smashed two myths about the Moulin Rouge into the ground.  First of all, not all the women were topless — there seemed to be two castes among the dancers, with about two thirds of the dancers wearing little more than beads, and one third either wearing flesh-colored bras or actual bras throughout the show.

Secondly, there were men in the show.  Seriously.  There weren’t as many men as there were women, but they were dancers and were major parts of the show as well. 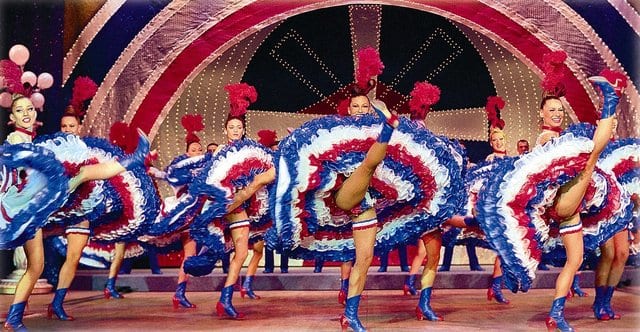 And finally — the can-can!  The show concluded with the girls in blue, white and red ruffled petticoats, kicking higher and higher, filling the air with so much energy that you couldn’t help but shout, “Vive la France!” at the end of it all.

I then realized why they seated all the men at our table on the side directly next to the stage — the skirts swished right over their heads.  Mario enjoyed that!

Our Moulin Rouge experience lasted four hours, but it felt like it went by in a flash.  I really can’t emphasize just how much I enjoyed this show and what a special experience it was.  The Moulin Rouge is one of the few travel cliches that ABSOLUTELY lives up to the hype.

And, of course, there was the fact that I got to share it with this guy.

Essential Info: Our experience was part of the Dinner and Show at the Moulin Rouge package, which costs 195 EUR ($255.90) per person and included the Féerie show, the three-course Toulouse-Lautrec meal, half a bottle of champagne per person, and private pickup and drop-off from a central Paris hotel.

2023 update: This exact tour is no longer available this tour is similar!

Many thanks to GetYourGuide for making our evening at Moulin Rouge possible.  All opinions, as always, are my own.

38 thoughts on “A Dazzling Night at the Moulin Rouge”