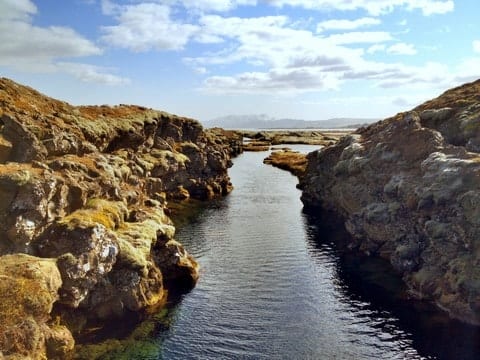 One of the absolute most extreme things you can do in Iceland?  Snorkeling (or even diving!) Silfra.

Silfra, also known as “The Rift,” is home to astonishingly clear waters — some say the clearest in the world.  The water is fed by glaciers and keeps to a temperature of about 2 degrees C (34 F), even in May.

Was I insane for even considering this?!

Most of my readers thought so, at least at first.

But people come to Silfra, located in Þingvellir National Park, for two reasons: first, to say that they snorkeled right between Europe and America.  Silfra is the rift between the American and Eurasian techtonic plates.

And the second reason is for this. 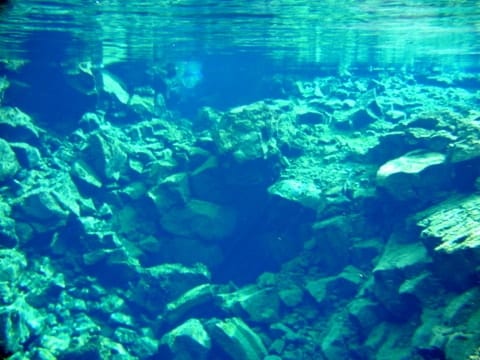 People come here for the blue.

From May 15 through August 31, Dive.is offers a Snorkeling Silfra Under the Midnight Sun tour.  The tour leaves at 4:00 PM and returns at 9:00 PM, and there’s plenty of light throughout.  While there are lots of companies that do Silfra tours, Dive.is is the only tour to do it at this time of day.

The result?  We got Silfra all to ourselves.

I knew this would be a physically strenuous activity and I was a bit nervous, but our guide, AJ, put me at ease right away, telling stories and cracking jokes.  AJ is originally from Poland and has made Iceland his home — though he likes to spend part of the winter diving in Southeast Asia, including one of my favorite places in the world, Sihanoukville!

“How could you ever leave Cambodia and Thailand to live here in the cold?!”  I asked him.

“I just love Iceland,” he replied.  “It’s my home now.”  Later, I checked out his bio on the Dive.is web site and found out that AJ spends his time plotting to be the first man to swim around Iceland.

The drive to Þingvellir National Park from Reykjavik took about an hour, and soon we arrived at Silfra.  There were six of us in our snorkeling group: two American guys, two British guys, a girl from Hong Kong, and me.  Also with us was a group of divers from Dive.is, who would be following right behind us.

First up was getting into our dry suits. 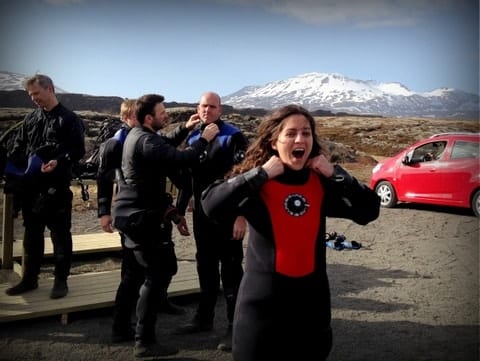 What did we have to wear to snorkel in such cold waters?  First, on top of thermals and thick socks (or for me, two pairs of leggings and two long-sleeved shirts), a warm suit that was essentially a human-shaped sleeping bag.  Next was an airtight drysuit.

“Do not pee in the drysuit,” AJ warned us again and again.  I have to wonder how many people violated that rule.

On top went a mask and snorkel, a head cover, a set of gloves, and finally a pair of flippers.

Know this: drysuits are incredibly uncomfortable and difficult to get on, particularly if you have long hair.  AJ helped us all out, but you’re going to lose a few hairs, no matter what.  It’s incredibly tight around your neck (as depicted in the photo above), as well as around your wrists.

“Is this okay?  Are you sure this is okay?” I kept asking AJ.  My right hand felt like it was losing circulation — and I have tiny wrists to begin with.

“It’s all right,” he said.  “It will feel different once you get into the water.”

Still a bit suspicious, I awkwardly walked down the ladder in my flippers and flopped into the water. 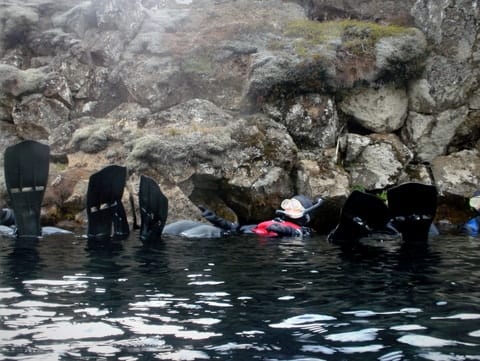 Now, that was a strange sensation — feeling like a giant marshmallow (or maybe the little brother in A Christmas Story), and floating perfectly on my back.  The drysuit kept me right on the surface, and the tightness around my wrist eased.  Getting into the water redistributed the air pockets within the suit, and I was immediately much more comfortable.

As the others gingerly stepped into the water, I rolled over to get a look at what lay beneath. 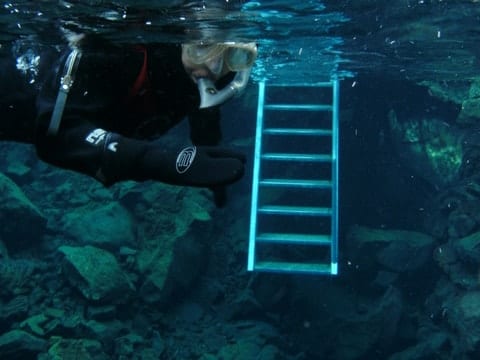 Blue.  Everywhere.  More shades of blue than you could ever imagine.

Chartreuse rocks on top, occasionally with a sprig of neon yellow grass the shade of a highlighter.

Teal rocks further down, covered in a fine moss.

A turquoise surface, seen from below.

Then cerulean, further down in the rift, as everything got deeper.

And finally, the bottom of the rift vanished into a strong, thrumming shade of violet.

I had never been so mesmerized in my life. 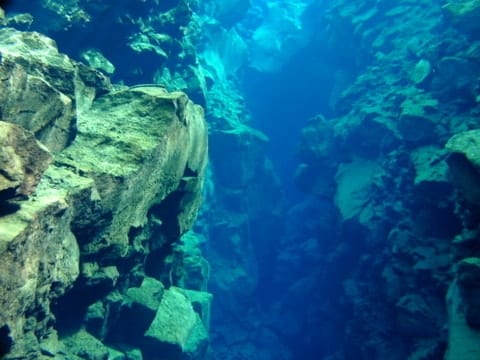 Snorkeling couldn’t have been a better way to experience Silfra.  All I had to do was lie on my stomach, kick occasionally, and watch that dreamy environment pass by.  The drysuit kept me from having to do any work.

How beautiful is this?!

I do wonder how the divers were able to handle it — the drysuits make it difficult to actually get far below the surface.  AJ had to swim hard to get our pictures from a few meters beneath. 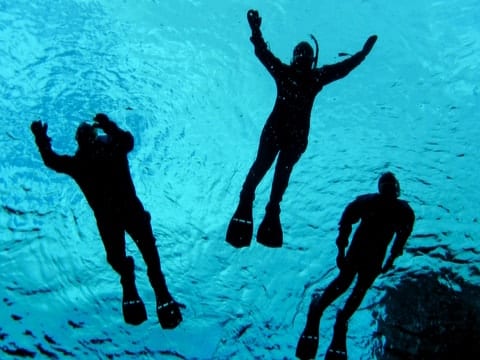 Best of all, there were no fish to be found in the rift.  (You remember my fish phobia, don’t you?)

And yes, the water was extremely cold — but it wasn’t as bad as I thought it would be.  In fact, the only parts of my body that got cold were my lips and my hands, which started getting a bit uncomfortable after 25 minutes or so.

Dive.is doesn’t let people stay in water this cold for longer than 40 minutes.  As snorkelers, this was our one turn; the divers had two rounds. 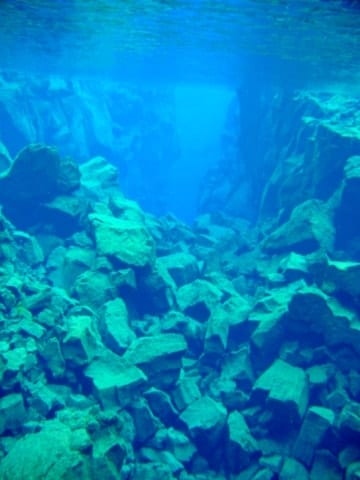 After a round of energetic swimming into another channel to avoid being swept into a lake (AJ warned us, “If you end up in the lake, only a helicopter will be able to rescue you,”), we lazily finished up our floating journey.

It was back to dry land, and back to the reality of Þingvellir. 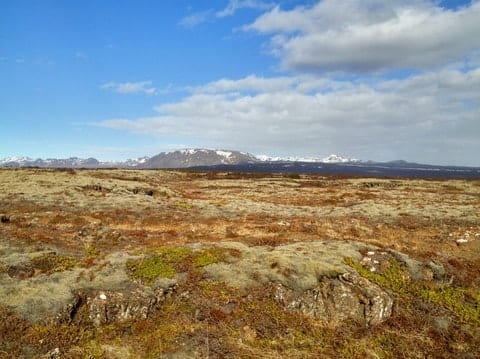 The Icelandic wind whipped across my face, my now-soaked long hair dancing wildly — and I knew that after Silfra, I would never look at the color blue the same way again.

My Favorite Places in Iceland:

Many thanks to Dive.is for hosting me on a Snorkeling Silfra Under the Midnight Sun tour.  All opinions, as always, are my own.

All underwater photos are courtesy of Dive.is.

36 thoughts on “Snorkeling Silfra: The Coldest, Bluest Waters of Iceland”