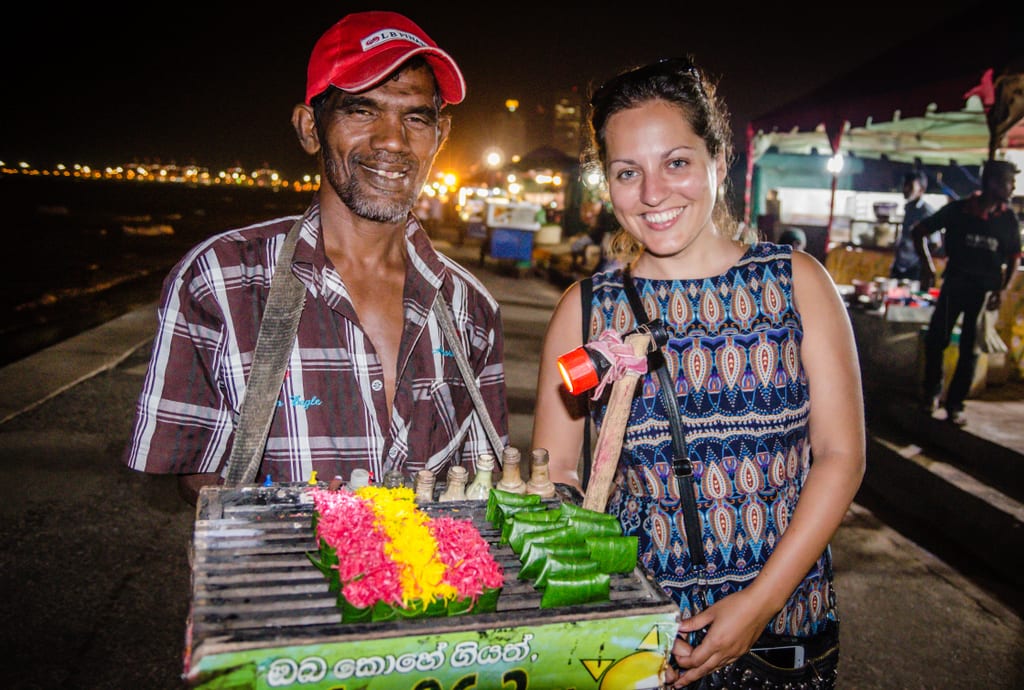 If you’re a very longtime reader, you might remember this very early post, which I wrote back in 2010 just before leaving on my six-month trip to Southeast Asia that unexpectedly turned into four years and counting around the world. (What a baby blogger I was back then!)

I had been dreaming of visiting Sri Lanka for years, and even though it lay outside Southeast Asia, I knew I had to try to get there.

But as time went on, Sri Lanka slipped out of my hands. I spent way too much money (especially on Thailand’s Andaman Coast) and I soon realized that my best financial move would be to just go back to Cambodia and hunker down and work for awhile. Which was absolutely the right decision at the time, but made me sad for missing Sri Lanka.

Four years later, I made up for lost time. 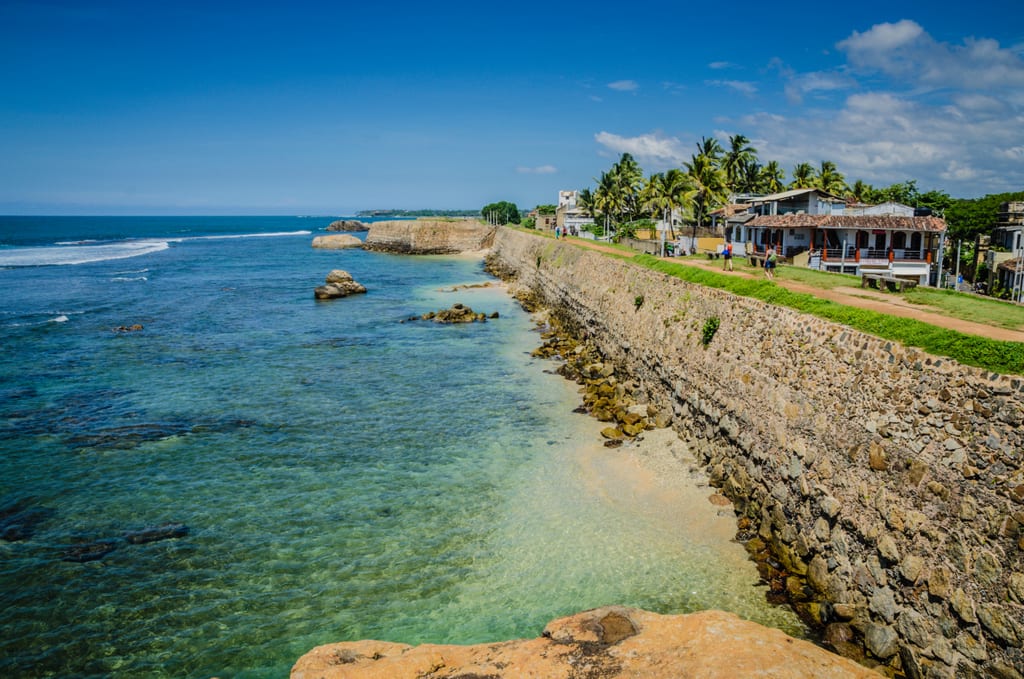 I attended Sri Lanka as part of TBCAsia, the world’s first-ever travel blogger conference in Asia and the first conference ever put on by the Professional Travel Bloggers Association, of which I’m a member, in association with the fantastic Cinnamon Hotels.

Now, I know you’re not here to read about a conference, so I’ll be brief — it was fantastic. The best conference I have ever been to. It was a four-day trip around Sri Lanka followed by a one-day conference with some of the most insightful, helpful and fascinating talks I’ve ever experienced. I’m overwhelmed and inspired to make a lot of creative changes in my life; most of my fellow attendees felt the same way.

Here are some of the highlights of my first visit to Sri Lanka: 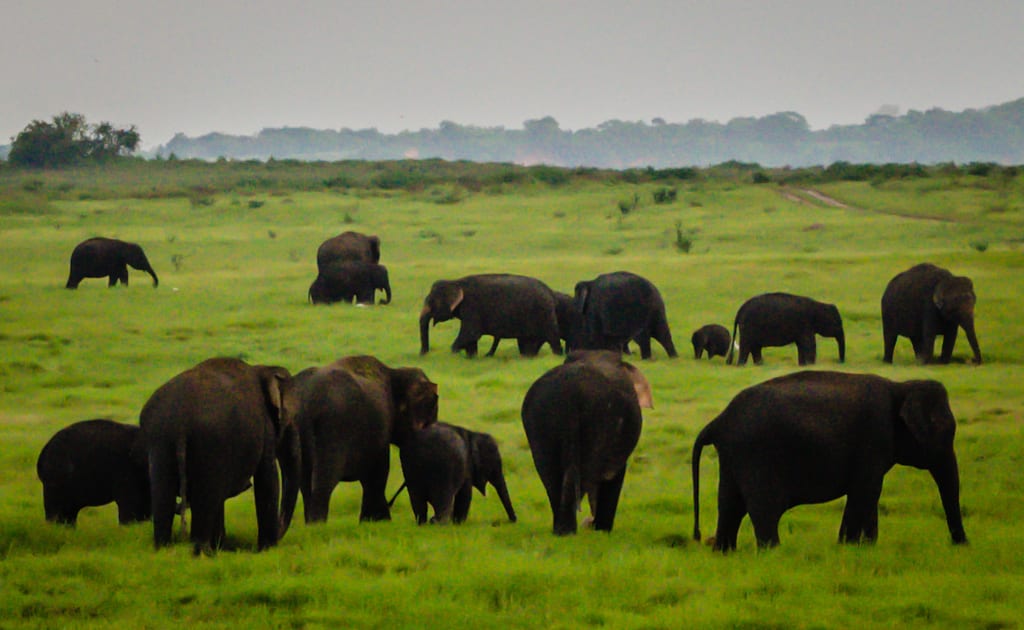 Sri Lanka is one of few places in Asia where you can see elephants in the wild, and boy, did Kaudalla National Park deliver. Similar to Addo National Park in South Africa, this is just home to so many elephants.

Sri Lanka is actually a fantastic destination for wildlife — while I didn’t make it there, several of my friends visited Yala National Park in the southeast and saw leopards as well! 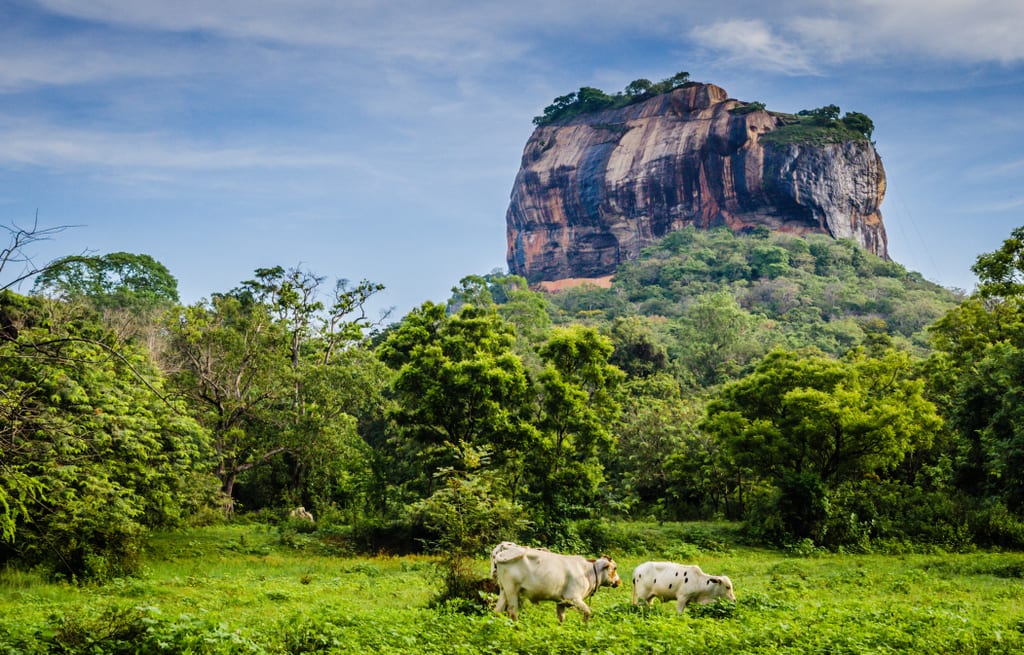 Sigiriya is the most-visited attraction in the country — a giant rock in the middle of hill country. It’s home to a World Heritage-listed ancient city, and yes, you can climb to the top! The views up there are sensational. 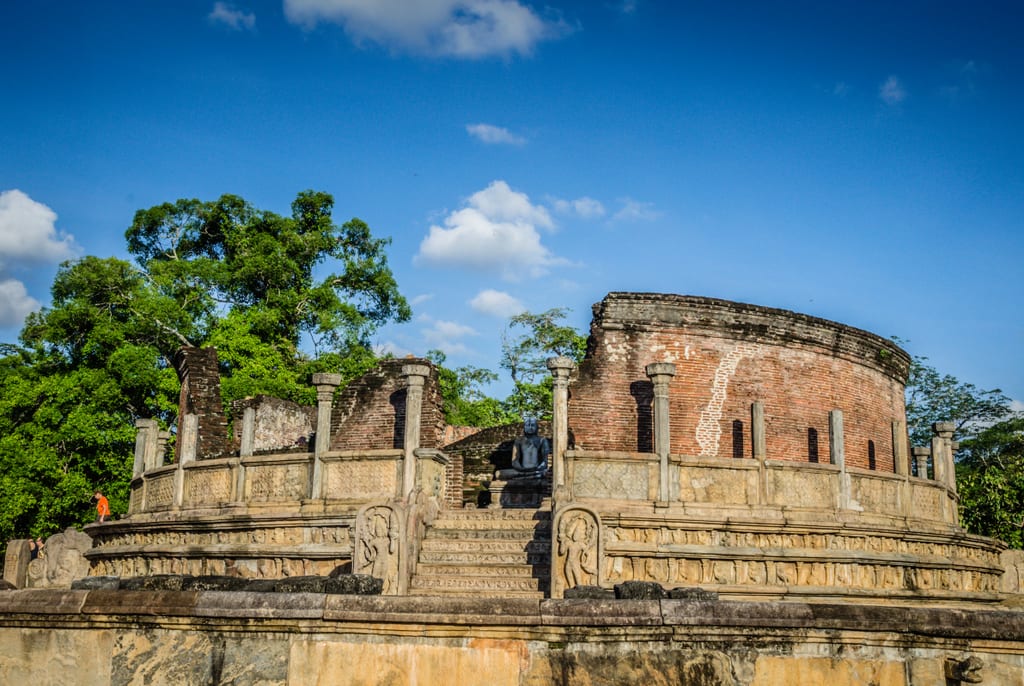 You know I love my World Heritage Sites — and Sri Lanka’s were really, really good. Usually you get an underwhelming one or two in each country (more like “That’s it?”), but that didn’t happen in Sri Lanka. These sites were some of the best that I’ve seen, anywhere. I visited five of the eight, including the ancient complex of Polonnaruwa. 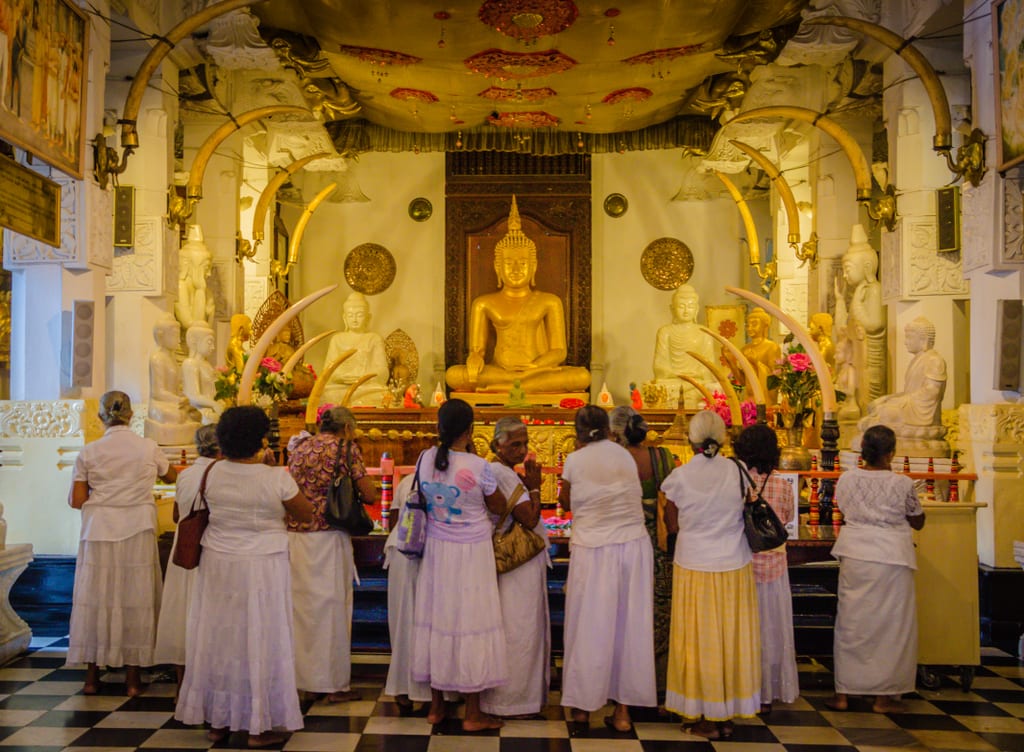 Kandy’s Temple of the Tooth was a fascinating temple complex. It’s home to a tooth of the Buddha, which is kept away from the public eye 11 months out of the year. (If you want to see the tooth itself, come in August!)

Kandy was a place I wish I had more time to explore. I loved the architecture, the hills, and the frenetic energy of the city. 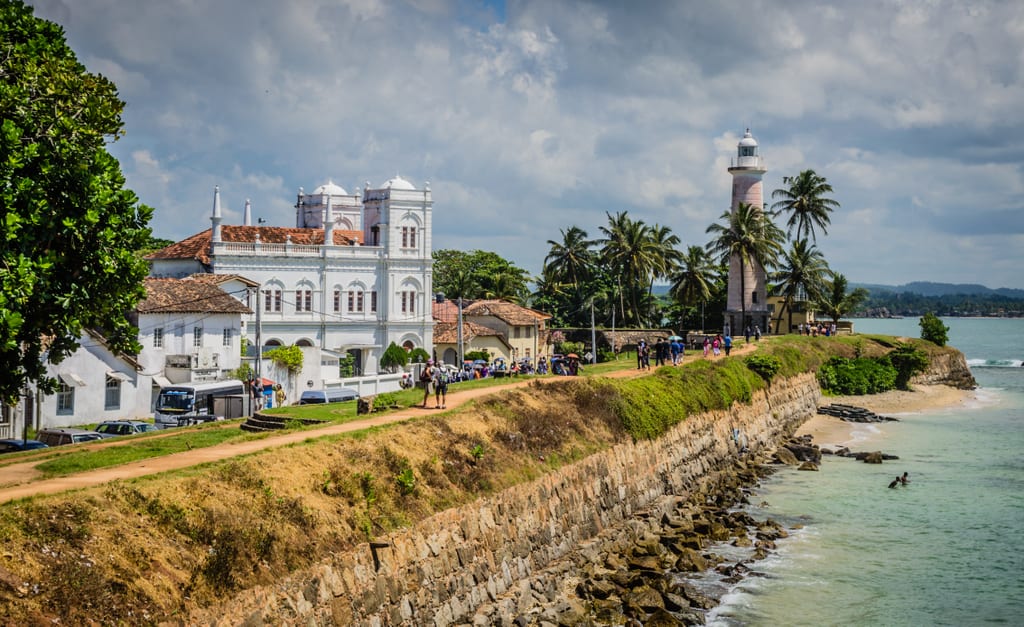 Galle was my favorite place in the country. It’s a fascinating small city with really interesting architecture and a 16th-century Galle Fort. This part of Sri Lanka was hit badly by the 2004 tsunami, but the fort protected much of the city.

Galle was also my 101st UNESCO World Heritage Site, and I couldn’t imagine a better place to celebrate that achievement! 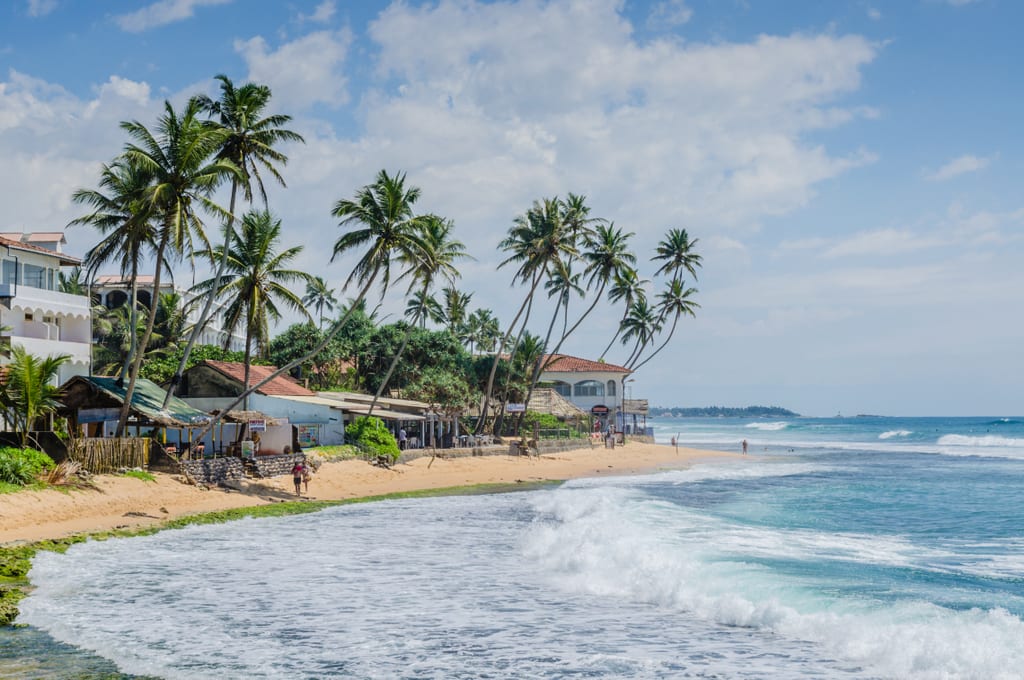 Beaches? Yeah, they were amazing. This one was near Hikkaduwa.

The waves on most of the beaches I visited were pretty intense. If you like swimming in big waves, it can be a lot of fun. Until you get into a fight with the sea and the sea wins and you lose both your bathing suit top and bottoms and your male friends have no idea what to do as you shriek, “HELP ME! DON’T LOOK! HELP ME! BUT DON’T LOOK!” 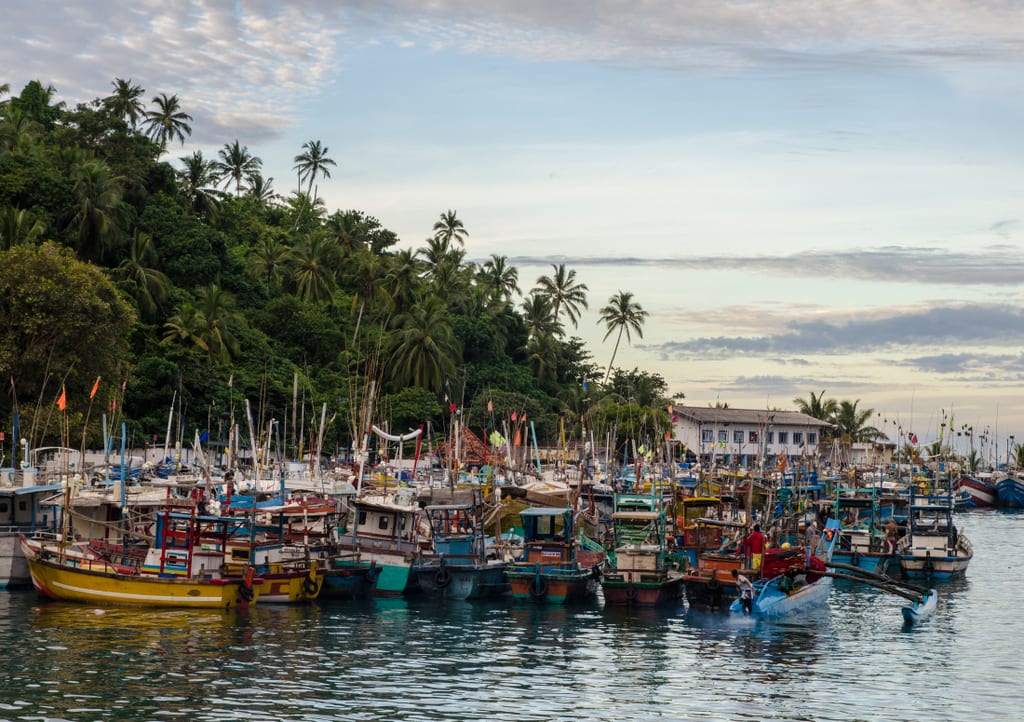 What struck me again and again was how much Sri Lanka felt like Southeast Asia — maybe a less-developed Thailand or Vietnam. Mirissa, a fishing village turned chilled out beach town and whale watching mecca, had the feeling of Mui Ne or the less-busy parts of Koh Lanta. 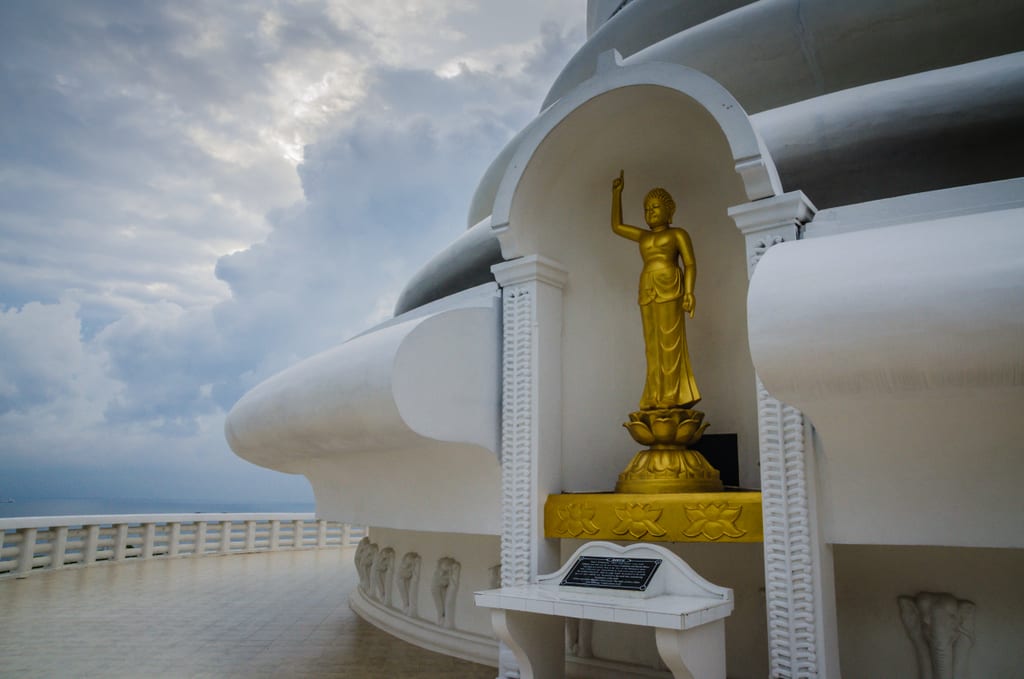 In the old post I linked to above, I used a picture of this temple near Jungle Beach on the south coast. This photo is my own. So simple, clean and beautiful, it wasn’t as ornate as some of the other ones I visited, yet I liked it better. 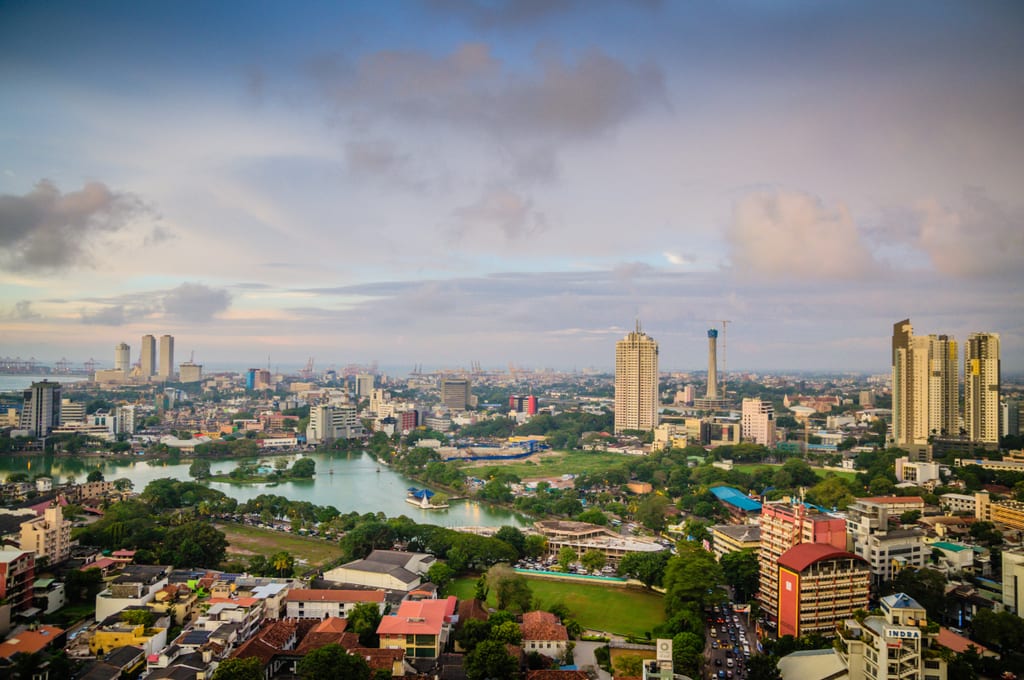 Even Colombo was a lot of fun! Colombo doesn’t get a lot of love, even from seasoned travelers, and plenty of people will tell you to skip it. Well, I had a lot of fun there, especially hanging out on the Galle Face Green along the water, eating delicious street food, taking in the views, and dancing to the occasional musician. 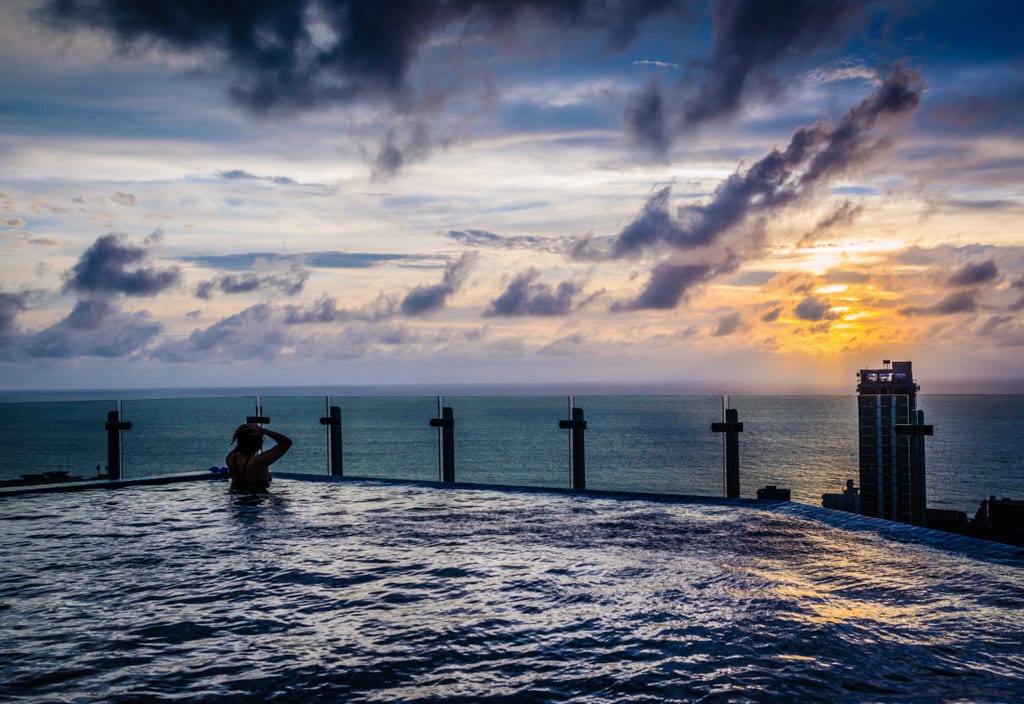 And the next time I go back to Colombo, I hope to stay at Cinnamon Red — my favorite Cinnamon property and a really funky boutique hotel. Love that infinity pool! 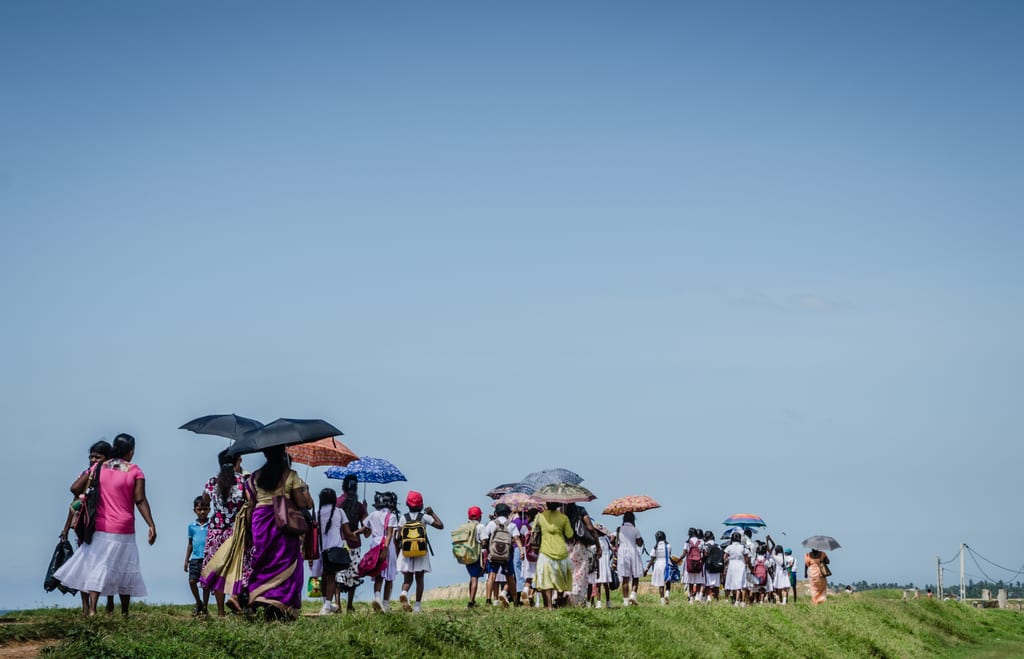 The kind, welcoming people were also a major highlight of Sri Lanka. While Sinhala and Tamil are the local languages, English is widely spoken, which made it easy to have conversations with people. And if not conversations, everyone was quick with a smile.

At one point at Polonnaruwa, a woman simply came up to me, held my face, said, “Beautiful,” and walked on!

I also left Sri Lanka with a collection of new local friends who work in the travel industry. We may or may not have had some big nights out… 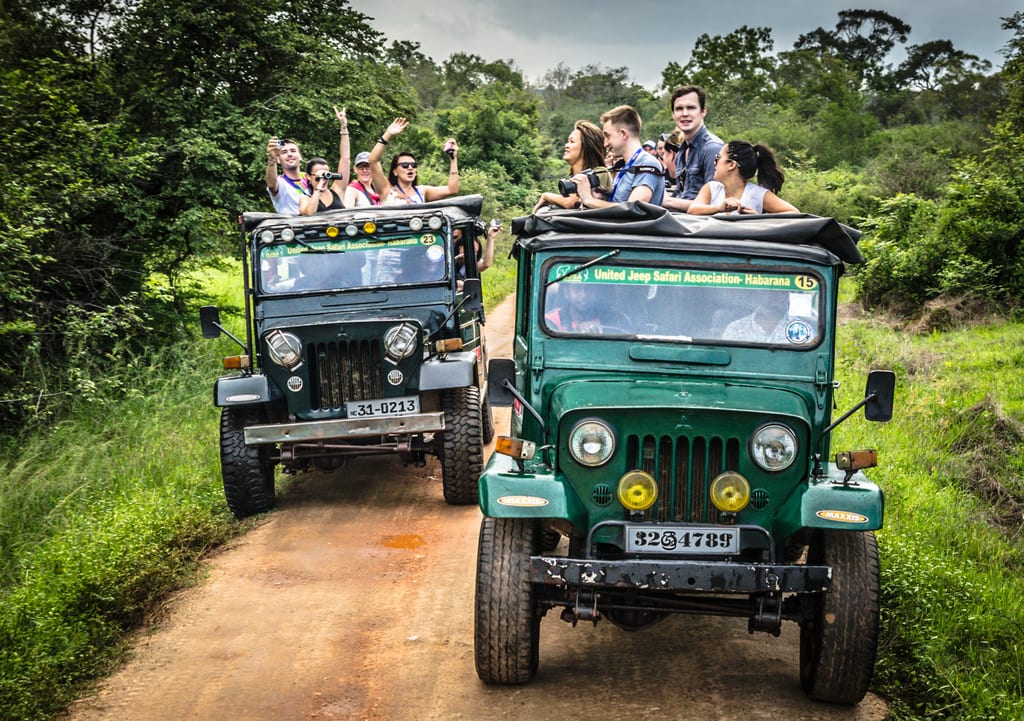 And, of course, hanging out with blogger friends both old and new was a wonderful time — not to mention incredibly therapeutic after the rough year I’ve had. I have no words for how much I cherish my friends. 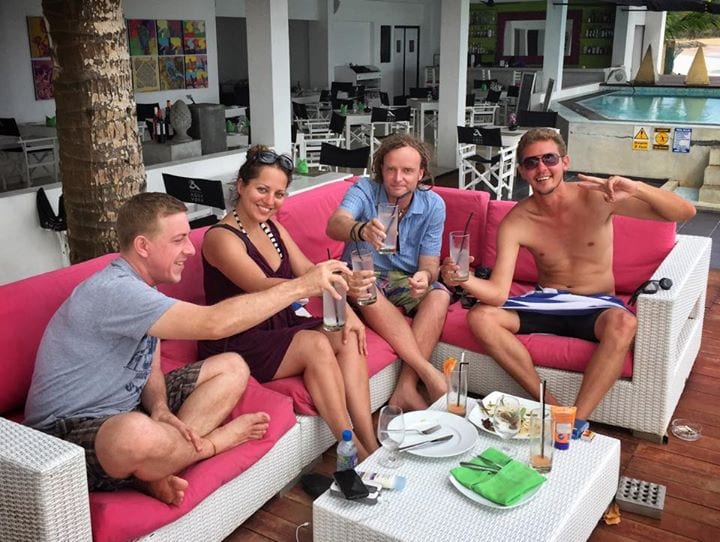 After the conference was over, I spent two weeks hanging out on the south coast with a group of my friends. This was my first vacation in 2.5 years and while I didn’t take a full digital detox, I spent it hanging out with my friends and enjoying the beaches and sights down south. Much more on our antics later. 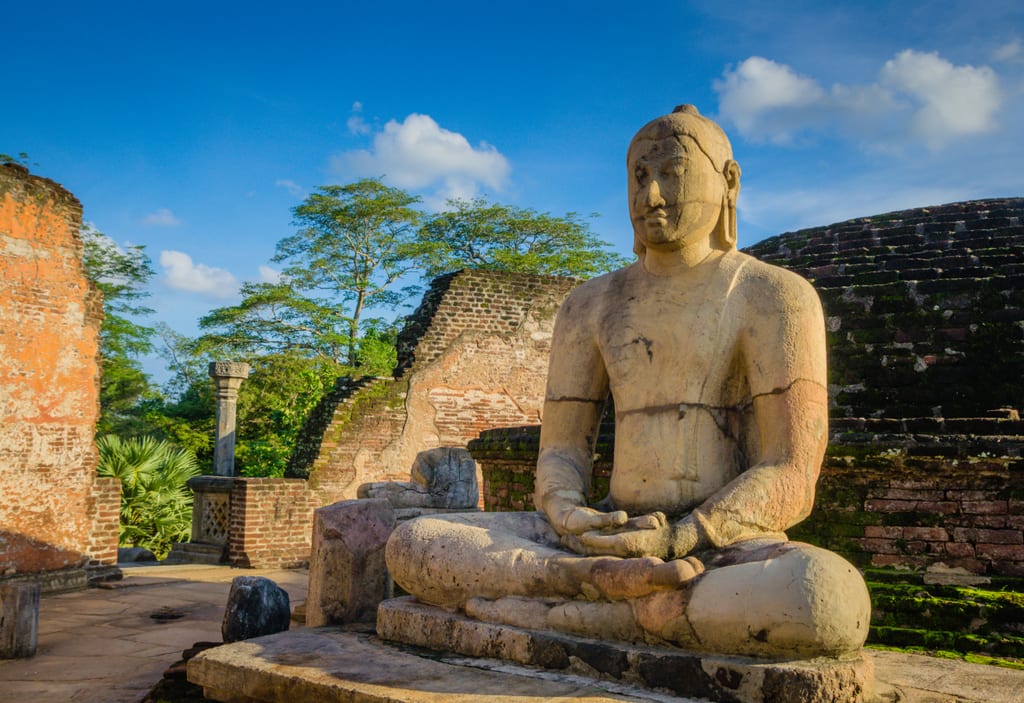 I loved this country so much. And even with three weeks, I know that I barely scraped the surface. There might be more Sri Lanka in my future, and I look forward to delving deeper into this magnificent country.

As with all destinations, I recommend purchasing travel insurance before visiting Sri Lanka. I never travel without it and always use World Nomads.

Have you been to Sri Lanka? Does this look like your kind of place?