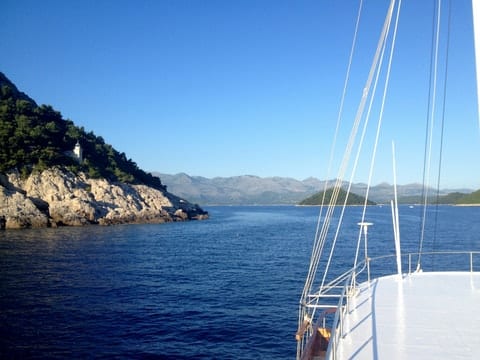 When it came time to take my first vacation in the last two years, I wanted to do something I’ve dreamed of for years — sailing the islands off the coast of Croatia.

Dave and I joined up with my frequent and much-loved partner Busabout on their One-Way Croatia Sail.

THIS. TRIP. WAS. AMAZING.

Cruising Croatia with Busabout was the perfect combination of relaxation and exploration, a new and interesting but not difficult destination, with tons of new friends.  And Croatia’s Dalmatian Coast is one of the most beautiful places I’ve ever seen!

Each day had a comfy routine.  We would set sail early in the morning, and stop for a swim en route to our destination.  Sometimes it was jumping off the boat into the middle of the Adriatic; sometimes we’d stop at an unfathomably gorgeous beach. 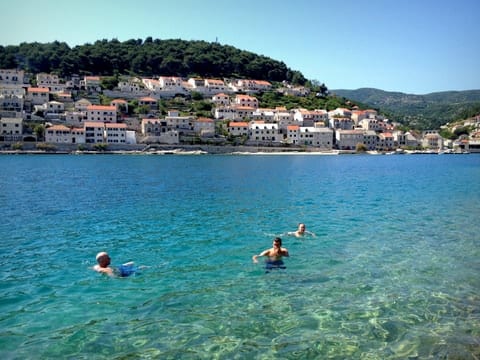 We’d have lunch on the boat, and then we’d pull into our destination for the day: piratey Omiš, low-key Makarska, party-happy Hvar, gorgeous Korčula, otherworldly Mljet, and finally, the Pearl of the Adriatic, Dubrovnik.

Our guide, Adam, would give us a discreet tour (unlicensed tour guides aren’t permitted in these towns, so Busabout guides have to be on the DL), and we would either join the afternoon activity or go exploring or beach-hopping on our own.  We would all meet up for dinner at a restaurant, then go out for drinks — sometimes just a few, sometimes quite a few.

My highlights of the week: 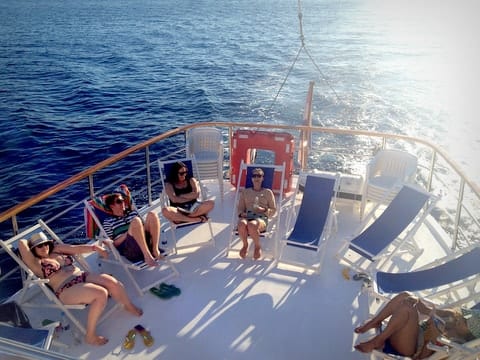 Sitting in the Sun and Enjoying the Cruise

The best part of the trip was also the simplest — just sitting on the deck, catching rays, and reading.  We spent every morning this way and it was supremely relaxing. 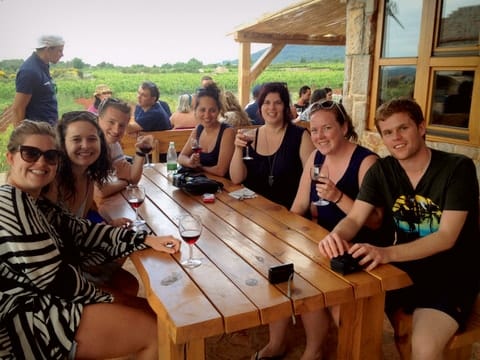 This wine tasting at Marinero’s in Stari Grad, Hvar, was a lot of fun and great value, with four full glasses of wine for 110 kuna ($18).  The red was absolutely sensational and tasted of vanilla and smoke and spices.  But the biggest highlight was the bread — this may be the most delicious, juiciest bread I have EVER tasted! 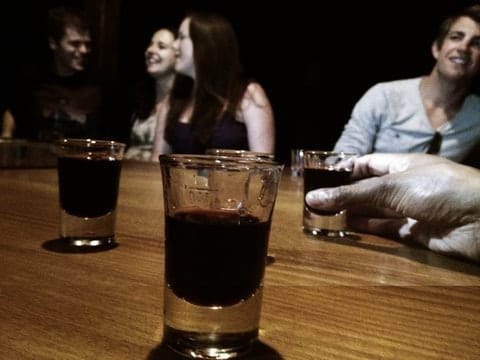 One of our biggest nights out was in Hvar Town, where we went to Kiva Bar to do Tequila Boom Booms.  What are Tequila Boom Booms?  You put on a helmet, they take a glass filled with tequila and I don’t know what else, and then they SLAM IT ON YOUR HEAD TEN TIMES before you drink it.  Weird, dizzying, and not painful.

We went on to dance all night long! 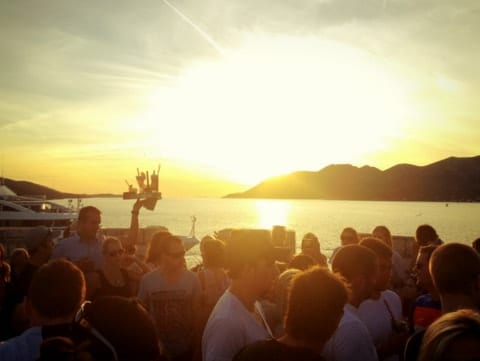 There is a bar in Korčula called Massimo — it’s built inside an old tower, you have to climb a ladder to get to the top, and they bring drinks up via dumbwaiter.  And once at the top, you get the absolute best view of the sunset that you can imagine! 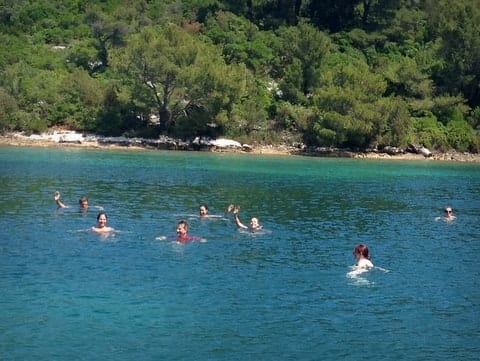 Mljet National Park, covered with bright green saltwater lakes, was one of the most spellbindingly beautiful places I’ve ever seen.  After finding out we wouldn’t be docking overnight in Mljet, we had only 30 minutes to spend there.  Dave and I wrestled with whether we wanted to pay 90 kuna each ($15) for just 30 minutes, but we decided to go for it.

And it was FANTASTIC.  With only 30 minutes to spare, it became a game — a huge group of us raced to the saltwater lake, jumped in super-fast, took pictures super-fast, and laughed our heads off as we ran back to the ferry.  Best quickie activity ever. 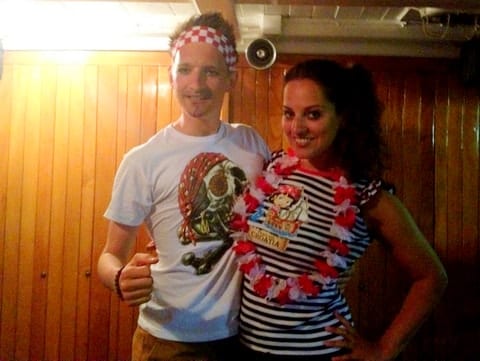 On our second-to-last night, we put on our pirate gear for a party on the boat!  It was a night of piratey drinking games and good times.

I love the drinking game Kings, but I generally hate when people add rules (you must end every statement with “in my pants,” you have to take the little man off your drink, etc.).  But our resident Kiwi, Brook, made the best rule ever: “You can’t show your teeth.”

That night, I laughed harder than I’ve laughed in years. 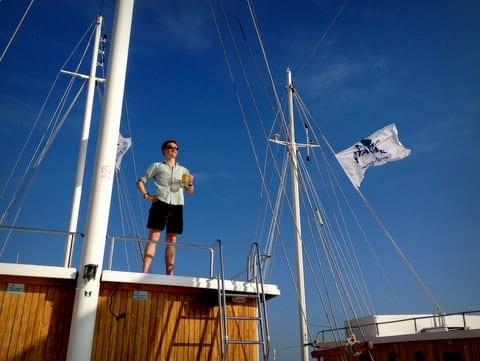 It was fantastic — though as you would expect, it wasn’t without its faults.

What You Should Know About The Busabout Croatia Cruise

The Captain has the power to alter your trip, and likely will.

The Captain has the right to divert the ship anywhere he’d like.  As a result, this is NOT someone you want to anger.

We found out while traveling that many Croatian captains hate spending money, and as a result, avoid docking overnight in expensive ports.

Both times, the captain cited the weather as reason.  While I don’t claim to be an expert on sailing or weather, both of those days, the weather was FINE — no different than the other lovely days, and nowhere near the worst sailing day we had. 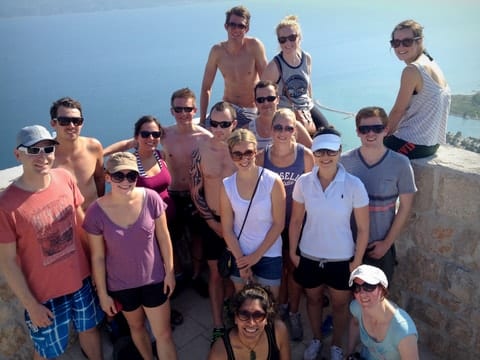 You don’t have to do every activity.

There’s some pressure to join in the official activities — both free and paid-for activities during the day, dinner at predetermined restaurants, dinners like the Captain’s Dinner.  It’s not the heavy pressure other tour companies are famous for — it’s a subtle pressure, a peer pressure.

By the end of the week, more people were dropping out of activities.  To be frank, many of us on board thought the Captain refused to dock in Mljet because he was mad that there weren’t enough people to do the second Captain’s Dinner, a moneymaker for the crew. 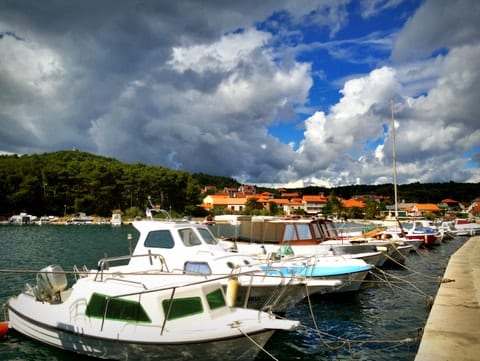 Ensuite and Shared Bath have a BIG difference.

When you book your trip, you get to choose between a room with an ensuite bathroom and one with a shared bathroom.  We chose to go ensuite.  These are actually on two different boats, so make sure to book the same kind of bathroom as your friends.

After my experience and talking with others, I’ve learned that the two kinds of boats attract two different kinds of travelers and thus have very different atmospheres.  The shared bathroom boats are cheaper and tend to have a younger (mostly early- to mid-twenties), more heavily partying crowd.  Australians dominate and tend to be on gap year trips.

The ensuite boats, by contrast, have an older crowd (mostly mid-twenties to mid-thirties) that parties to a lesser degree.  Australians dominate, once again, but tend to be on holiday for a few weeks; some come from Australia and some are living abroad, often in the UK.

Our group had three Brits (including Dave), one American (me) and one Kiwi — everyone else was Australian.  (Our guide, Adam, was a bit of a geographic mutt — Kiwi-Australian-South African and living in Europe!)

From what we saw and what I’ve heard from others, people on the shared bathroom boats tend to party hard most nights.  On our ensuite boat, we went out for drinks every night, but we only had three big party nights (of which I participated in two).  One was the pirate party.

For more on the difference, see what Christine had to say — she took the same cruise a week after we did, and she was on a boat with shared bath.

While we always had lights, the outlets did not work unless we were docked in a port.  This was problematic because I was taking pictures with my iPhone, and iPhone batteries deplete quickly.  In addition to that, when we were docked, I couldn’t get the outlet to work unless I wiggled the plug at the perfect angle.

If you have a device that needs to be charged often, like an iPhone, you should bring a backup power supply — even one of those power-extending iPhone covers would help you out a lot here. 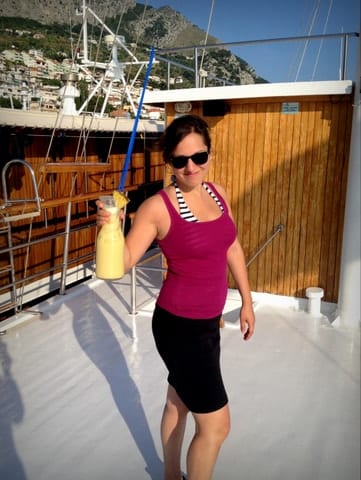 I had hopes of stopping at a grocery store and buying a few bottles of wine for cheap drinks on the boat — but that’s not an option on this trip.  You are prohibited from bringing both food and drinks on board.

Happy hour prices start at about $3 for a beer, up to $15 for a liter cocktail.  Happy Hour is 20% off the regular price.  While the giant cocktails are a lot of fun, they’re not that strong.  Considering that most of the cruises I’ve been on have had either dollar beers or euro beers on board, this is a huge markup.

Expect to tip the crew.

The crew, who work for Katarina Lines and not Busabout, live primarily off their tips from passengers.  Do not scrimp on this.  If you’re not satisfied with the cruise, think about whose fault it is before you stiff them.  As miffed as we were with the Captain’s rerouting our boat, we were very happy with our crew.

Dave and I each tipped 200 kuna (about $34), which is an appropriate tip for this cruise.

The pirate party was one of the best parts of the trip.  Adam suggested that we to pirate shopping in Makarska, and we did find a few things, but the selection wasn’t that great.  A few piratey things in your bag could help you out a lot! 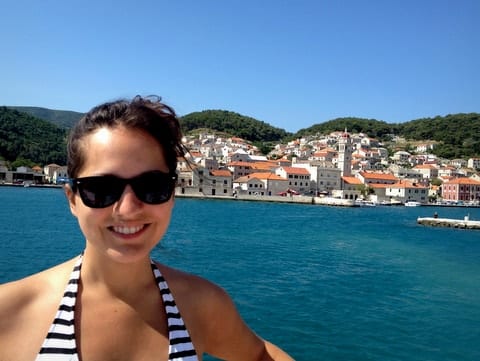 Though there were both high points and low points to the cruise, I had such an amazing time.  I’d gladly go back to lie in the sun as the boat sails along the mountainous coast to the next unbelievably gorgeous Croatian island.  It’s a trip I’ll never forget. 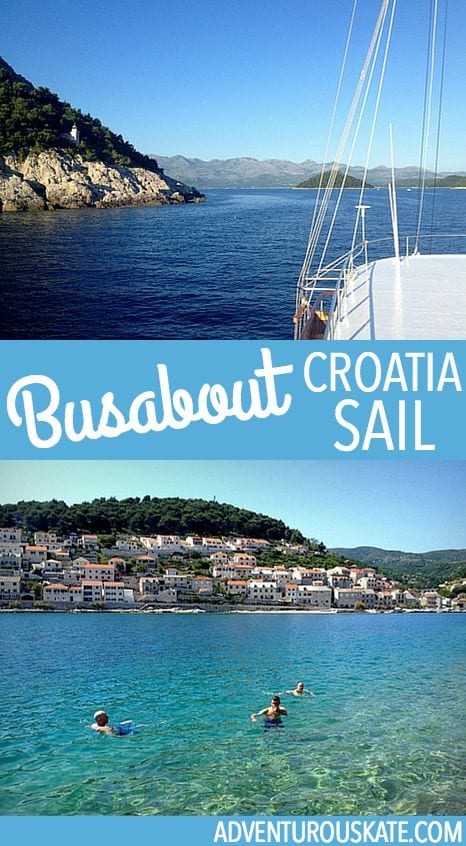 Many thanks to Busabout for the complimentary Croatia One-Way Sail trip.  All opinions, as always, are my own.

37 thoughts on “Busabout Croatia Sail: THE. MOST. FUN. EVER.”